Conveyer belts carry millions of kernels through sorting machines in a giant processing plant in the western San Joaquin Valley near Newman, California.

Last year Stewart and Jasper Orchards hulled and shelled more than 40 million pounds of almonds -- most of which were headed overseas. Two thirds of California’s almonds are exported.

But, even as product lines expand and prices soar -- Jim Jasper, the company's president, worries about the plant’s future.

On a walk through his orchards he points to his neighbor’s property.

“There’s 80 acres of almonds up there straight ahead," says Jasper. "They’re dead. And, they didn’t have any water.”

He says in fifty years of farming -- weathering many droughts – his anxiety level has never been so high. 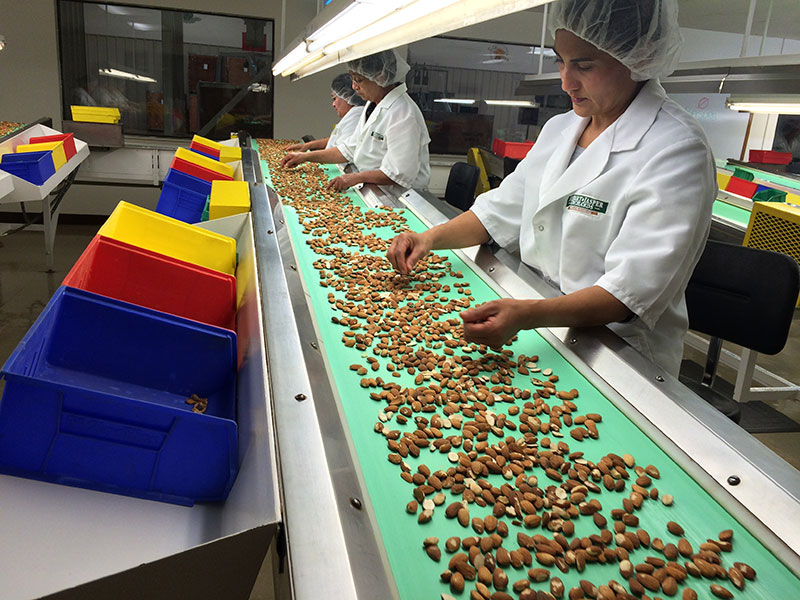 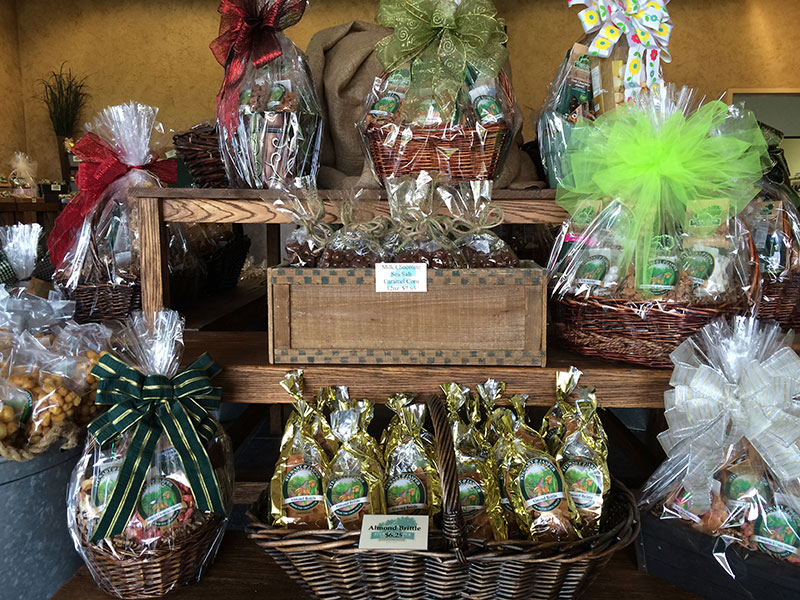 "I’m very, very leery of being able to produce a nice crop because of what the trees went through last year, and what they’re going to suffer through this year," says Jasper.

Stressed groves are common throughout the dry, cracked Central Valley.

Daniel Bays is a twenty-eight year old, third generation farmer in nearby Patterson. 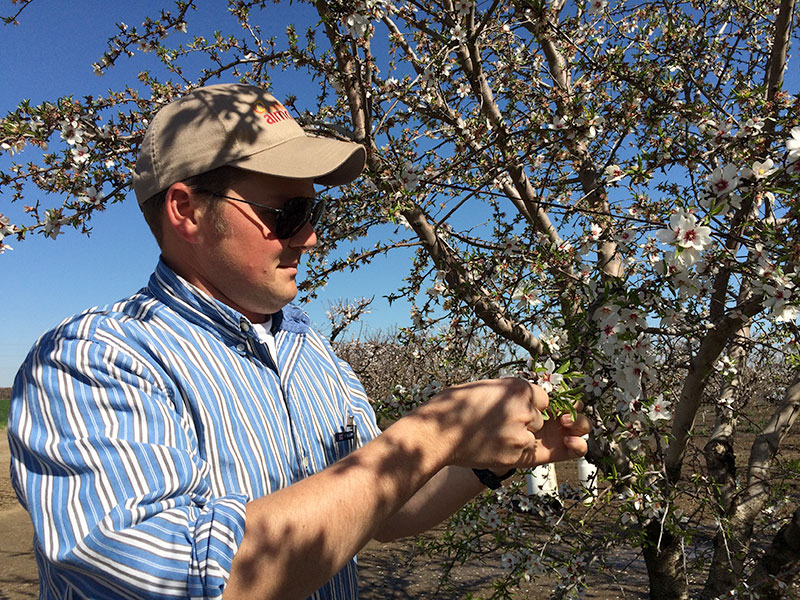 With his father and grandfather, Bays works about 2,000 acres of almonds, apricots, walnuts, lima beans, tomatoes, melons and wheat.

Bays is watering his groves with as little water as possible through deficit irrigation.

"Instead of irrigating for your ideal crop you’ll cut that back -- stress that tree a little more at certain times of the year," says Bays. 'That impacts your crop the following year but at least you can keep your orchards alive.” 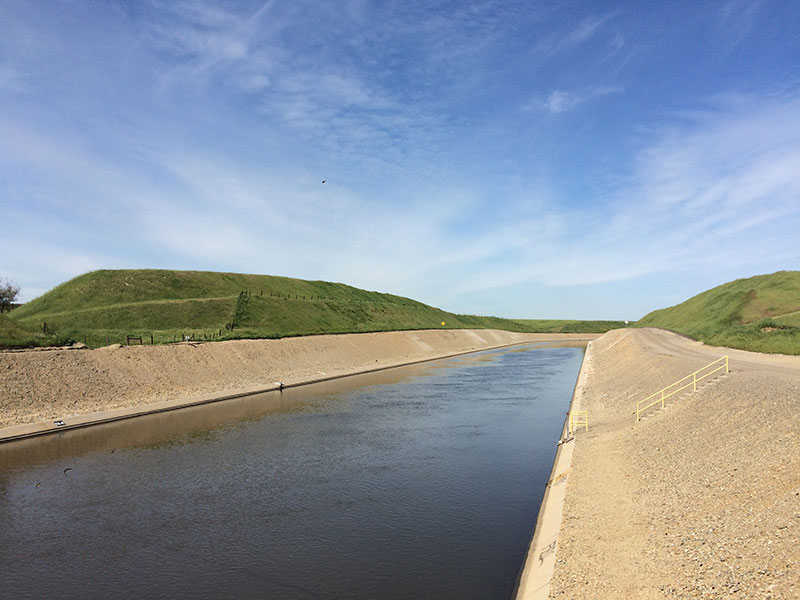 The trees become more stressed every year the drought continues.

And, Bays is irrigating with salty groundwater.

"The salt load, the mineral load that we’re putting on trees and putting into our soils reaches toxic levels with the plant and it starts to have detrimental affects to the plants that we’re growing," he says. 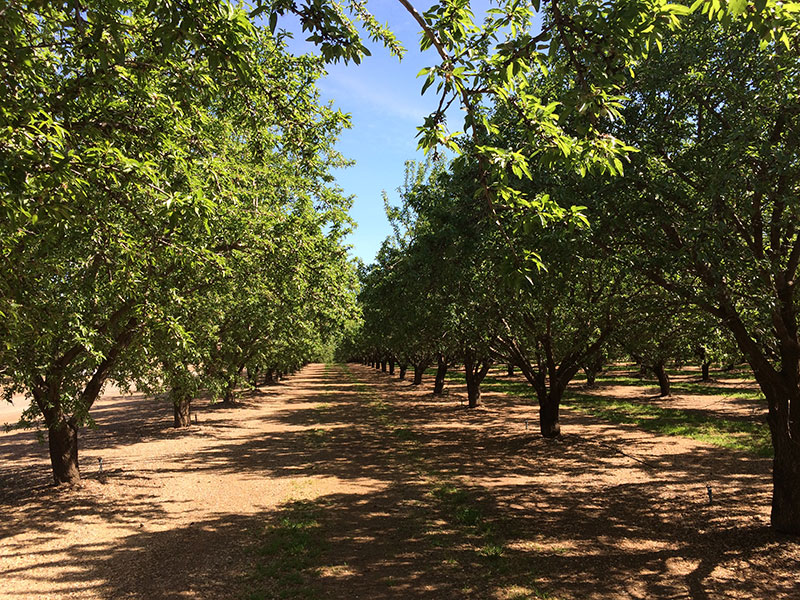 For the second year in a row, Bays -- like his neighbors -- received a zero allocation from the Central Valley Project.

In other words, he won’t get any federal water from the Sierra.

This year’s snowpack was five percent of normal.

Tom Stokely, a water policy analyst with the California Water Impact Network, says watering with groundwater in areas south of the Sacramento San Joaquin Delta, not only withers orchards, it pollutes the environment.

"What we call poison land that contain high levels of selenium, salt, boron, arsenic and other toxic substances that become mobilized when they irrigate them causing water pollution and wildlife hazards," says Stokely.

He emphasizes that almonds use more water than all of the indoor residential usage in California, which is about 3.5 million acre feet. 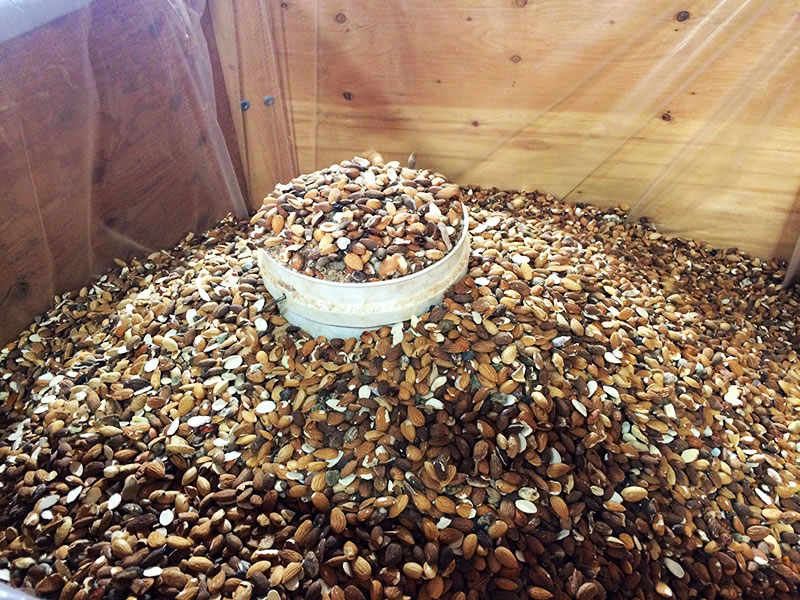 An acre-foot of water is enough to cover an acre of land with one foot of water, or 325,851 gallons.

Stokely worries that the almond rush could lead to a resource imbalance.

"One concern is that almonds will be able to outbid cities in water markets during extended droughts," says Stokely.

Stokely stresses that he’s not against almonds. He’s critical when they’re grown in parched areas of the southern half of the Central Valley.

"If California were really serious about the drought it would ban the planting of permanent crops in areas where there’s interruptible water supplies and groundwater overdraft," says Stokely.

But, Daniel Bays defends farming in the dry region because so many fruit, nut and vegetable crops thrive south of the Delta.

"We should be farming here," says Bays. "We have some of the best soils in the world. We have a Mediterranean climate and there’s a limited number places in the world that have that type of climate."

The almond industry fuels the state’s economy with $11 billion, and it employs more than a 100,000 people, according to a recent UC Davis study. It also uses about 8 percent of the water consumed by humans in California, according to the California Department of Water Resources.