In between the tractors? Solar Panels. Next to the nurseries? A phosphate-free fertilizer stand.

The most popular new technology? Drip tape. It's perforated and buried in the furrows of row crops.

This is the Colusa Farm Show's 50th year. Organizers say it is the oldest in the state of California.

Farmers say they've never had so many earth-friendly tools at their disposal. 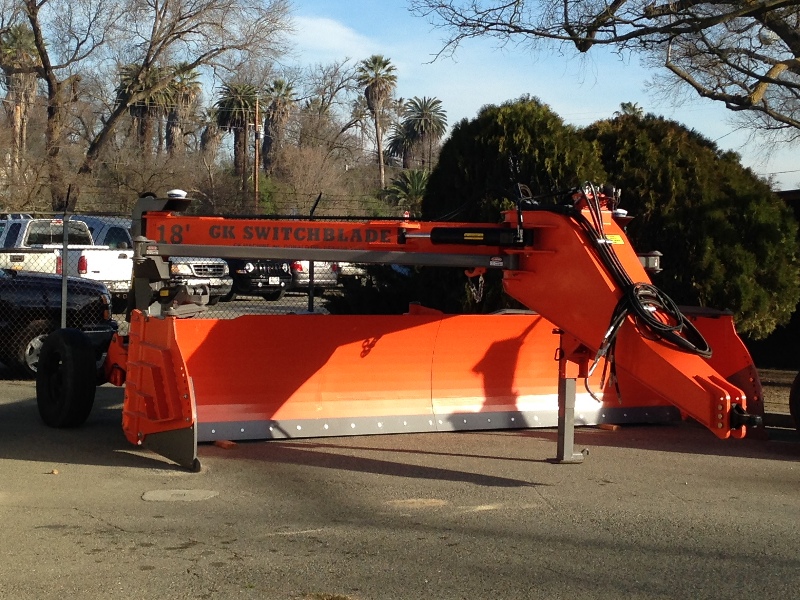 David Zwald is chairman of the farm show and a walnut grower. He says the number of water-related products and services offered at the show has increased by 50 percent in the past 10 years.

"There's less and less flood irrigation," says Zwald. "There's more tape drip line that they're putting into the fields that will last six-to-nine years. The water just goes directly to the plant. So, it doesn't run off."

More and more farms are using solar power to run the pumps that supply the drip tape with water. Daniel Peters with Efficient Energy Concepts says farmers are interested in the prospect of reducing their power bills by 80 percent.

"We've been selling solar for about eight years now," says Peters. "There's been an increase in the number of people putting it up because of PG&E raising their power rates. Solar has been more efficient, prices have gone down on the panels and inverters. So, it's now affordable for the average customer." 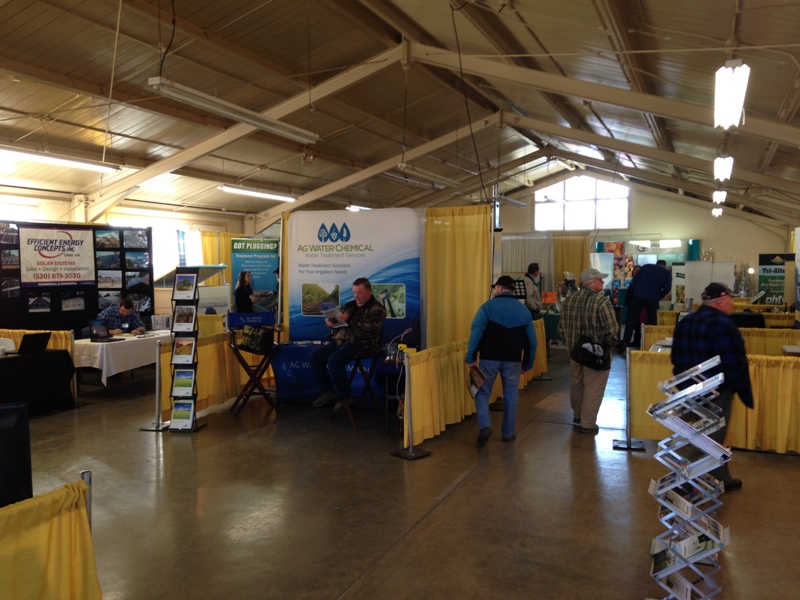 While the cost of solar drops, the costs of other products that are more environmentally friendly remain relatively high.

Bob Low is a farmer in Solano County. He's reading up on a liquid compost product. Low says he's willing to pay more for a compost that has no manure or chemicals.

"I'm growing stone fruits - apricots and peaches. Basically instead of putting down ammonium nitrates and solid chemical, maybe it would be easier for the tree to accept the liquid." 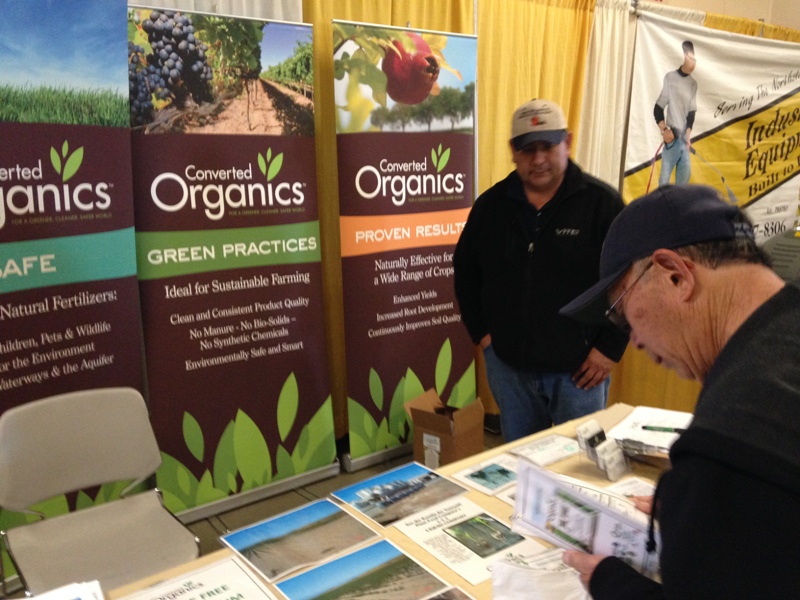 Ease and greater efficiency are common selling points at the farm show. Some companies offer an easier way to dispose of farm waste.

Amid the tractors and harvesters, David Cover is displaying a large white cylinder connected to a black box that says "Bioburner" on the side. Cover says he's been selling the "Bioburner" for about a year. He says it burns waste at 1900 degrees and is the future for converting farm waste into clean, usable energy.

“We just sold one to a family up here. They have two girls that are headed for   the Olympics. They heat their swimming pool with this. It’s unbelievable. So, your imagination. Do what you want to do with it. He’s a walnut farmer. He’s got hulls and he doesn’t know what to do with them, so that’s his fuel.” 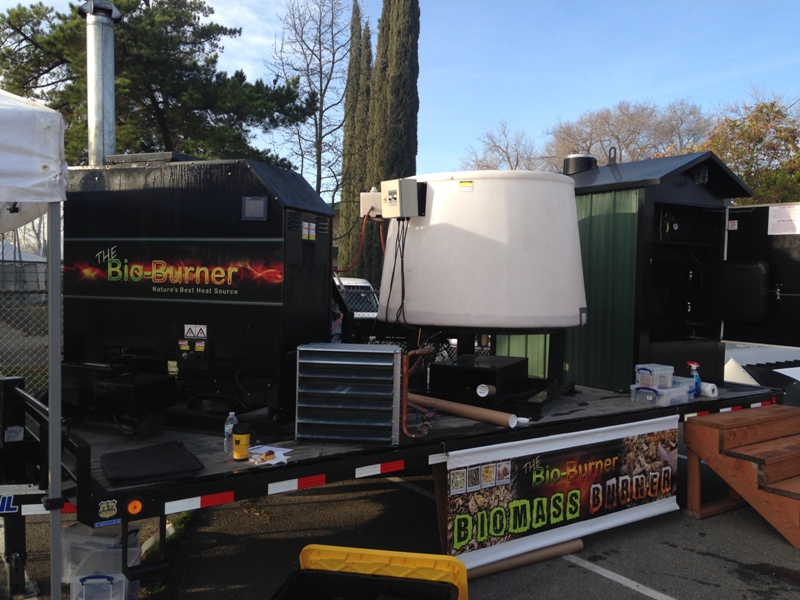 Cover says a different wood burning unit that he's been selling for the last decade has become increasingly hard to sell because of its high emissions.

The company irrigate.net says sales of its water-monitoring system have increased by 20 percent compared to last year.

Salesman Trevor Doop says a farmer who uses technology to monitor the soil can reduce water use by 15 percent.

“We have different scales. You can see what your water moisture rate is at throughout your orchard. So, you don’t have to water every day. You can water once a week, see how far you can push your orchard without stressing your trees too much. And so you can still get your high yield and save as much water as possible.” 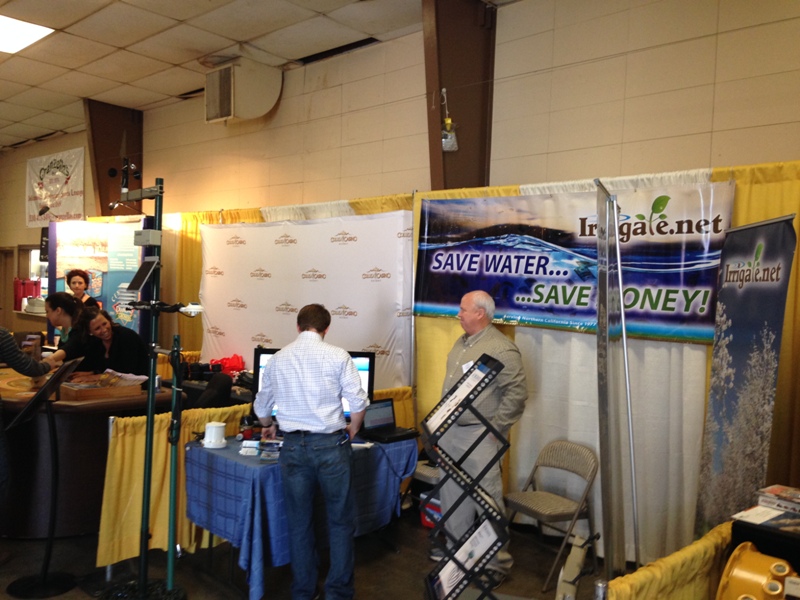 Even with the new efficient technology and tools available, the one thing still on everyone's mind is the one thing they can't buy at the show. Rain.

Derrick Ash is a farmer in Colusa County.

"Everybody's scrappin'," says Ash. "I normally grow 1,200 acres of rice. Last year, I only did 300 that I was able to get water for. This year, I don't know what I'm gonna do. I'm still waiting to hear from the irrigation districts and Mother Nature."

The National Weather Service forecast calls for rain late this week through early next week. The farmers at the show say that will be great if it happens, but they'll continue to prepare to do more with less water.