Damage From King Fire Could Get Worse

A forest is rarely quiet after a fire. Trucks that haul burned timber from private lands roar past. Chain saws buzz in the distance. But besides humans, not much else in this portion of the Eldorado National forest seems alive. Becky Estes is an ecologist with the Forest Service.

“We’re standing in an area that, this is going to be probably 100 percent mortality of the trees," says Becky Estes, an ecologist with the Forest Service.

We’re in the Rubicon River Canyon, where the King Fire burned 50,000 acres in one day. The pine trees are black and lifeless. Not one pine needle remains on the branches. 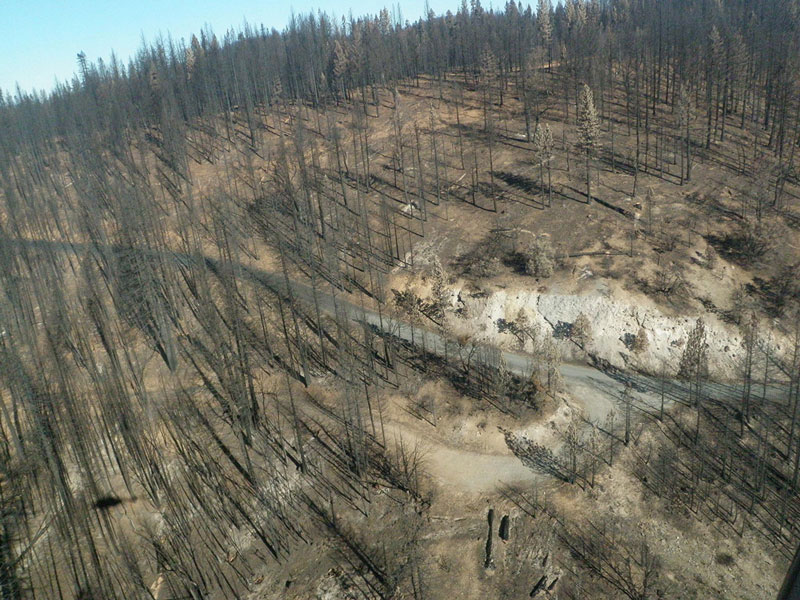 “Particularly in this drainage, the amount of needles that were consumed off of these trees, in the time frame that it happened in, was much more of a severe case than the Rim Fire,” says Estes.

Almost half of the fire-damaged area is what ecologists call a high-severity burn. It’s a larger percentage than the Rim Fire, which was the largest wildfire ever in the Sierra Nevada.

But the damage isn’t limited to the trees.

“What I really want to do is get some unburned soil, what it’s supposed to look like. But on the way here I couldn’t find it,” says Eric Nicita, a soil scientist with the US Forest Service and coordinator for the Burn Area Emergency Response team.

He steps out of his truck on 11 Pines Road in the forest, near Georgetown. Nicita is looking for soil that wasn’t scorched by the fire. It’s difficult. 23 percent burned at high severity, more than twice than the Rim Fire. 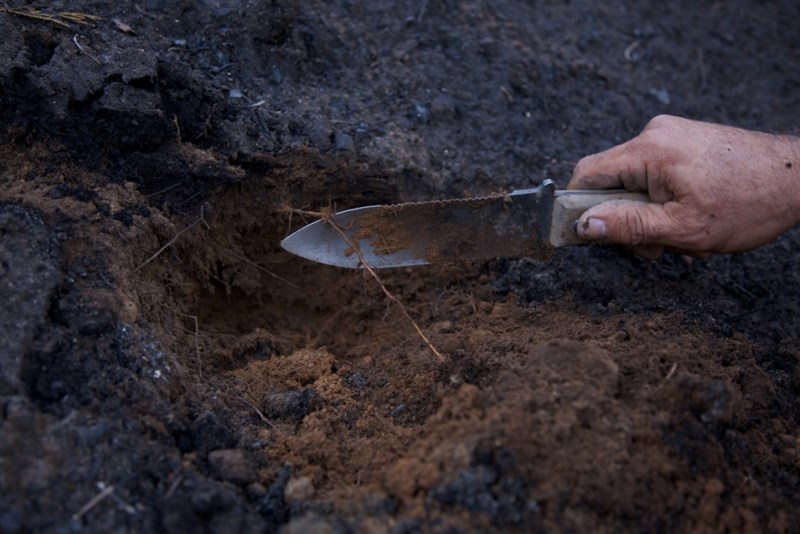 “What we do is kind of scrape away the dirt and see what’s going on.”

Nicita digs into the black soil. Eventually he sees roots of plants.

“If this was a moderate burn they’d be right at the surface but you have to go down probably about two inches before you start getting viable roots again,” says Nicita.

He says he’s never seen a fire burn so much soil so severely.

“What influences the burn severity is the amount of organic material on the ground," says Nicita. "If it’s a nice clean forest with little buildup, those generally don’t burn that hot.”

But fire hadn’t burned the vegetation on the ground here in 120 years. That, combined with the steep slopes of the canyon, the constant wind, and drought conditions kept the fire raging.

Forest Service District Ranger Pat Trimble drives me through the fire-damaged area. She’s been working in this forest for more 30 years. Besides the hum of her truck, you only hear her sigh as she looks at the devastation.

"Yeah, it just brings tears to my eyes just looking at it,” says Trimble.

But the Forest Service is worried this isn’t the end of the damage. Severely burned soils stunt plant growth. The soil’s structure has changed, and water will bead on the surface and run off. Eric Nicita says he’s concerned about winter storms.

“Very, very worried," says Nicita. "If we have a normal, whatever normal means, precipitation year, we’ll have some events that will drive soil down the hill," he says. "If we have two inches over an hour, it would look completely different out here.”

Nicita offers an example. He points to a slope next to the road that’s almost vertical. Mudslides put the road at risk. Down slope from the road is the Rubicon River.

"The Rubicon is known for its fisheries," says Nicita. "It’s got a great trout run and that’s at high risk also but there’s not really much we can do to reduce the risk to that.”

The potential problems from erosion are widespread. Both the Placer County Water Agency and the Sacramento Municipal Utility District, or SMUD, operate reservoirs and hydropower dams on rivers in the burned area.

“We’ve seen already some effects of the erosion from roads being blocked by debris flows, trees threatening our power lines,” says Chris Moffitt, manager of power generation for SMUD.

He says the erosion can reduce storage capacity in reservoirs, or worse.

“We’ve had issues with siltation in reservoirs before where it gets into the intakes and comes through the system and does damage to the turbines,” says Moffitt.

For the next few weeks helicopters will drop mulch and straw over 1400 acres to try to reduce the risk of runoff.

The Forest Service lacks the money needed to cover the more than 6,000 acres that are suitable for treatment. California’s drought might stave off some of the danger. But the Forest Service would rather see a light steady rain soak into the soil, to help the forest heal.