Conductor Lorin Maazel, Who Brought America To The Podium, Dies 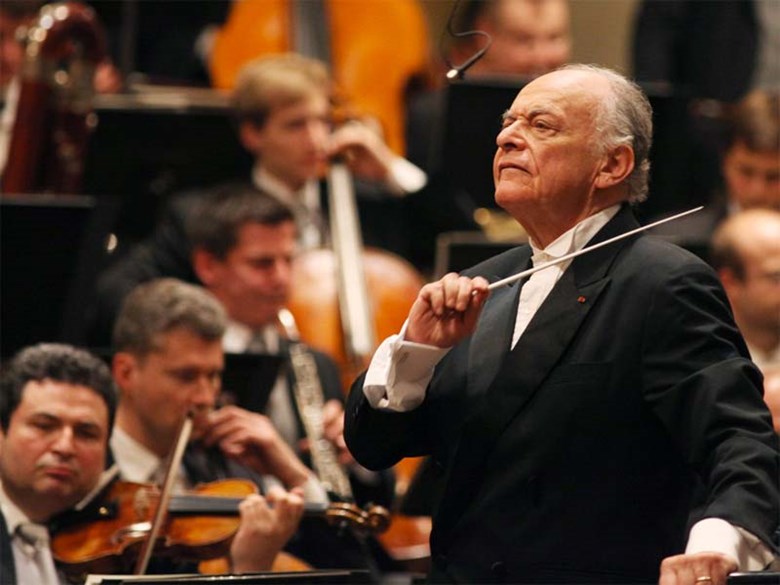 One of the most prominent American conductors, Lorin Maazel, died today at his home at Castleton Farms, Va. He was 84. His death was announced by the Castleton Festival, the annual summer series he founded.

The festival officially attributed his death to complications stemming from pneumonia; however, the Washington Post reports that Nancy Gustafson, the festival's executive director, said Maazel had been suffering an "unexplained illness following a kind of collapse from fatigue" due to heavy travel and work engagements across Europe, Asia and North America, despite having cancelled several appearances, including performances at Castleton and with the Munich Philharmonic and Boston Symphony Orchestra this spring.

Though born in Paris March 6, 1930, Maazel was a second-generation American who was recognized very early on as a musical prodigy. After beginning violin lessons at age 5 and conducting just two years later, he conducted most of the major American orchestras before he was 15. Yet he did not neglect academic studies. He studied languages, mathematics and philosophy at the University of Pittsburgh and, in 1951, went to Italy as a Fulbright scholar.

Soon after that he began appearing on many of the world's most prestigious podiums — not universally beloved as an artist or a personality, but recognized as brilliant nonetheless. He appeared at the Bayreuth Festival in Germany in 1960 — the first American to lead a performance there, and Jewish to boot — and made his debuts with the Boston Symphony in 1961 and the Salzburg Festival in Austria in 1963.

Maazel was one of the most internationally prominent conductors of the post-World War II era. Usually conducting from memory and heralded for his precise technique, his performances themselves were often wildly uneven. As Alex Ross wrote in The New Yorker in 2002, "He is unpredictable: Performances of his that I have heard over the years have ranged from the propulsive to the repulsive, with few subtle shades in between."

Nevertheless, over the course of his lengthy career, he conducted more than 7,000 performances in concert halls and opera houses, and made more than 300 recordings. He served as artistic director of the Deutsche Oper Berlin (1965-1971), general manager and artistic director of the Vienna State Opera (1982-1984), music director of the Bavarian Radio Symphony Orchestra (1993-2002), Pittsburgh Symphony (1988-1996), Cleveland Orchestra (1972-1982), Munich Philharmonic (2012 until his death) and the New York Philharmonic(2002-2009). He founded the Castleton Festival in Virginia with his third wife, Dietlinde Turban Maazel, in 2009 as a full-scale, 500-acre music festival and summer school for rising young musicians.

Controversially, Maazel also lead the New York Philharmonic in a very widely covered 2008 visit to North Korea. At the time, the tour was heralded as a potential breakthrough in that cloistered country's relations with the wider world.

Though Maazel was known primarily as a conductor, his international prominence allowed him the occasion to premiere his own compositions in very high-profile venues. His first opera, 1984, based on George Orwell's allegorical novel, had its world premiere at London's Covent Garden and was revived at La Scala in Milan. He also made his own concert arrangement of Wagner's Ring cycle, The Ring Without Words.

Along with his wife, Maazel is survived by seven children (three from his marriage to Dietlinde Maazel and four from previous marriages) and four grandchildren.