The Making Of OK Go's 'The Writing's On The Wall' Video 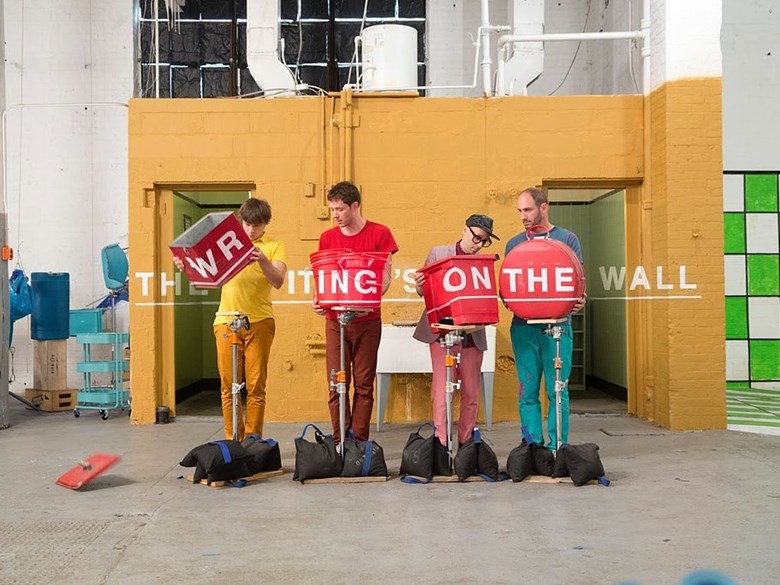 Last week OK Go posted a dizzying video for the band's new song "The Writing's On The Wall." In just seven days it's been seen seven million times, and for good reason: It's a brilliant mix of music, choreographer and trickery. Well, we have a little treat for you; a behind-the-scenes look at how this one-take, illusion-filled video was done. (If you haven't seen the original video yet, you can watch it at the bottom of this page.)

This video is all about perspective, the illusions are real, so to speak, and that's what makes this jaw dropping. Perspective images such as something called the Necker cube, a flat line drawing that looks 3 dimensional but isn't, make my eyes pop. And like all things in the original music video makes me question perception and about how we think depends on your point of view. Which of course is what the song is about.

This behind-the-scenes video will expand your perception even more. In an email, Damien Kulash, the singer for OK Go and also the co-director for the video, told us, "I think I love this [making-of] video as much as the music video itself. It shows how much more intense and complicated the choreography was off-screen than it was on-screen. And I love watching the incredible team. They are the rock stars, such an amazing group of people. I already miss spending 20-hour days with them all." The other directors of the original music video include Aaron Duffy and Bob Partington. The one-take video was done on a single hand held camera with 28 different illusions set up in the giant work space in Brooklyn. The set up took about three weeks to build, involving over fifty people. Tim Norwind, the bassist for the band, thinks this was the most difficult of their videos to make — not just because he had to shave half his beard — due to the choreography and the nine costume changes the band had to make in real time.

The song "The Writing's On The Wall" is the first single from the bands fourth and forthcoming album Hungry Ghosts, coming out on October 14.

Ok Go will perform at Assembly in Sacramento on July 15th.