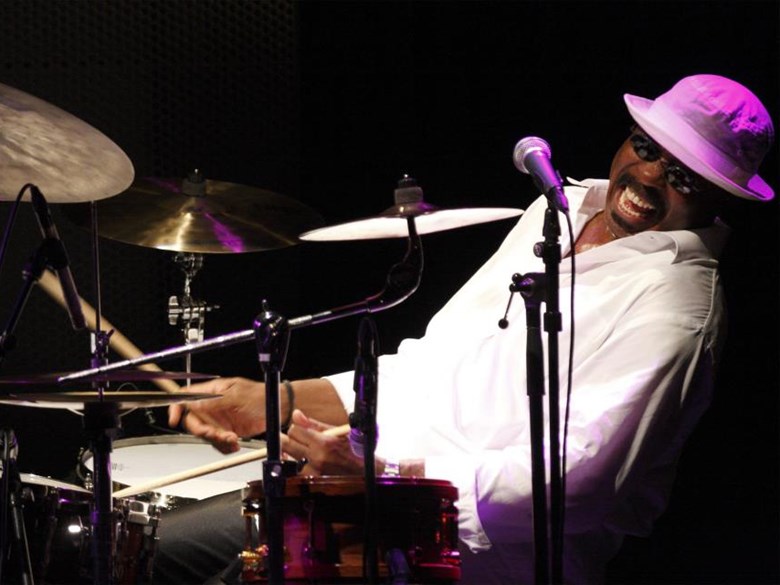 Harvey Mason is one of the most recorded and sought after percussionists in history. A first call studio musician, Mason has recorded with many of the greats, including Gerry Mulligan, Freddie Hubbard, Donald Byrd, Quincy Jones, and George Benson. His clean rhythmic style has made him valuable as a sideman on records with Herbie Hancock, Grover Washington, Jr., Bobby Hutcherson, Lee Ritenour, and many more.

For 25 years Harvey’s been the heartbeat of Fourplay, a fusion band he founded with pianist Bob James. Mason has also recorded eleven albums as a leader. On his latest recording, Chameleon, Harvey revisits and updates some classic tunes he first helped popularize in 70’s. Harvey became known as “The Chameleon” because he could easily fit into any musical assignment.

“Progress in music is not always a straight line,” Harvey said in a recent interview with CapRadio Music. “Sometimes I take an assignment and it ends up leading to a very surprising delightful destination, completely removed from the original project.”

Born in Atlantic City, New Jersey, in 1947, Mason attended the prestigious Berklee College of Music for a year, then received his degree in music education from the New England Conservatory. Before he could march in the graduation exercise, he hit the road with legendary pianist Erroll Garner in 1970. That led to thirteen months with George Shearing, bringing Harvey to the west coast. Soon the television and film work assignments started developing, but Harvey never abandoned his love for jazz.

In our interview, Harvey discusses how inspiring it was to work with a whole new generation of jazz musicians, including Christian Scott, Ben Williams, Matthew Stevens, and Ben Wendel . He also reflects on reuniting with Bill Summer and Paul Jackson, reworking some of the classic compositions he first trail blazed in the 70’s.