How monoclonal antibodies lost the fight with new COVID variants

Antonio Rapuano got an infusion of a monoclonal antibody to treat his COVID in Albano, Italy in 2021.

Monoclonal antibodies were once the star of COVID-19 outpatient treatments. Since they first became available in 2020 – even before the first vaccines – more than 3.5 million infusions of the factory-grown proteins have been given to patients in the U.S. to help reduce risk of hospitalization.

But one by one, different monoclonal treatments have lost their efficacy against new variants of the coronavirus. The rise of Paxlovid antiviral pills earlier this year, further dented their appeal.

Now, a new wave of omicron subvariants that are the best yet at evading the immune system's current defenses have taken over in the U.S. They're expected to knock out bebtelovimab, the last monoclonal antibody treatment standing against the coronavirus. Soon, it'll join bamlanivimab, casirivimab, sotrovimab and others in the graveyard of monoclonals that once targeted past COVID strains until they were outflanked by variants that evaded their protection.

"Monoclonals had their day, like the Model T or the biplane," says Carl Dieffenbach, director of the Division of AIDS at the National Institutes of Health, and lead of the NIH's Antiviral Program for Pandemics, "Now it's time to move on."

Not everyone entirely agrees. Monoclonals are still useful, some doctors say, for treating a vulnerable population.

"There are severely immunosuppressed patients that are not likely to mount an immune response to the virus, even if you treat them with antiviral drugs," says Dr. Raymund Razonable, an infectious disease specialist in the transplant division at the Mayo Clinic. "This is the group that is going to be the most affected by the absence of antibody-based therapies."

What's more new research is underway to develop new types of monoclonal antibodies that could even hold up against new variants.

How monoclonals work — and what they're up against

Monoclonal antibody treatments have always had a major weakness – they're easily outmaneuvered by new COVID strains. It's a flaw that's baked into how they work.

Monoclonal antibodies are lab-grown proteins that supplement your body's immune system – which, in most people, is naturally producing antibodies to hunt for possible threats all the time.

"You and I and every human being that has a functioning immune system is walking around with probably trillions of totally different antibody molecules just circulating in our blood," says Derek Lowe, a chemist and blogger for the journal Science, "Every one of us has a totally different suite of them. There are more of them than there are stars in the sky."

The tiny, Y-shaped proteins lurk in the blood in low concentrations, "waiting and waiting until they happen to bump into something that they stick to really well, and they find their soulmate, basically," Lowe explains. That "soulmate" is an antigen – a foreign substance that's entered the bloodstream, like a bacterial protein or a virus or a pollen grain.

Once a monoclonal antibody finds its soulmate — in the case of COVID, a specific part at the tip of the SARS-CoV-2 virus – it binds to the surface of the antigen. Then, it sends out signals to the immune system, "like hey, I've got a live one," Lowe says.

The most powerful antibodies can stop the virus in its tracks just by binding to it. For instance, "if you have an antibody that sticks to the tip of the spike protein at the business end of the virus – just the fact that it is stuck tightly to that means the virus cannot infect a cell," says Lowe.

Companies have stopped bringing these monoclonals to market. The federal government stopped promising to buy them in quantity, making it a riskier bet for companies.

"There are antibodies out there, but nobody has the $200 million to develop it," Dieffenbach says, citing costs that include producing the antibodies, running trials and getting them authorized by the Food and Drug Administration. Some companies figured it wasn't worth it, for a product that was likely to become obsolete in a matter of months, he says.

To be clear, these are antibody treatments for outpatient treatment. There is a different kind of monoclonal antibody treatment for hospitalized patients that remains viable. Actemra, as it's called, is not susceptible to virus mutation because it targets the body's immune reaction to the virus, rather than the virus itself.

New directions in research, and a potential comeback

There might still be hope for monoclonals. Drugmakers and researchers at government agencies are now retooling the strategy, looking for monoclonal antibodies that could last.

"Initially, the focus was, 'let's just find the most potent antibodies,'" says Joshua Tan, chief of the Antibody Biology Unit at NIH. "Now, there's awareness that we need to find antibodies that are likely to work against not just the [current version of the] coronavirus, but whatever may come." 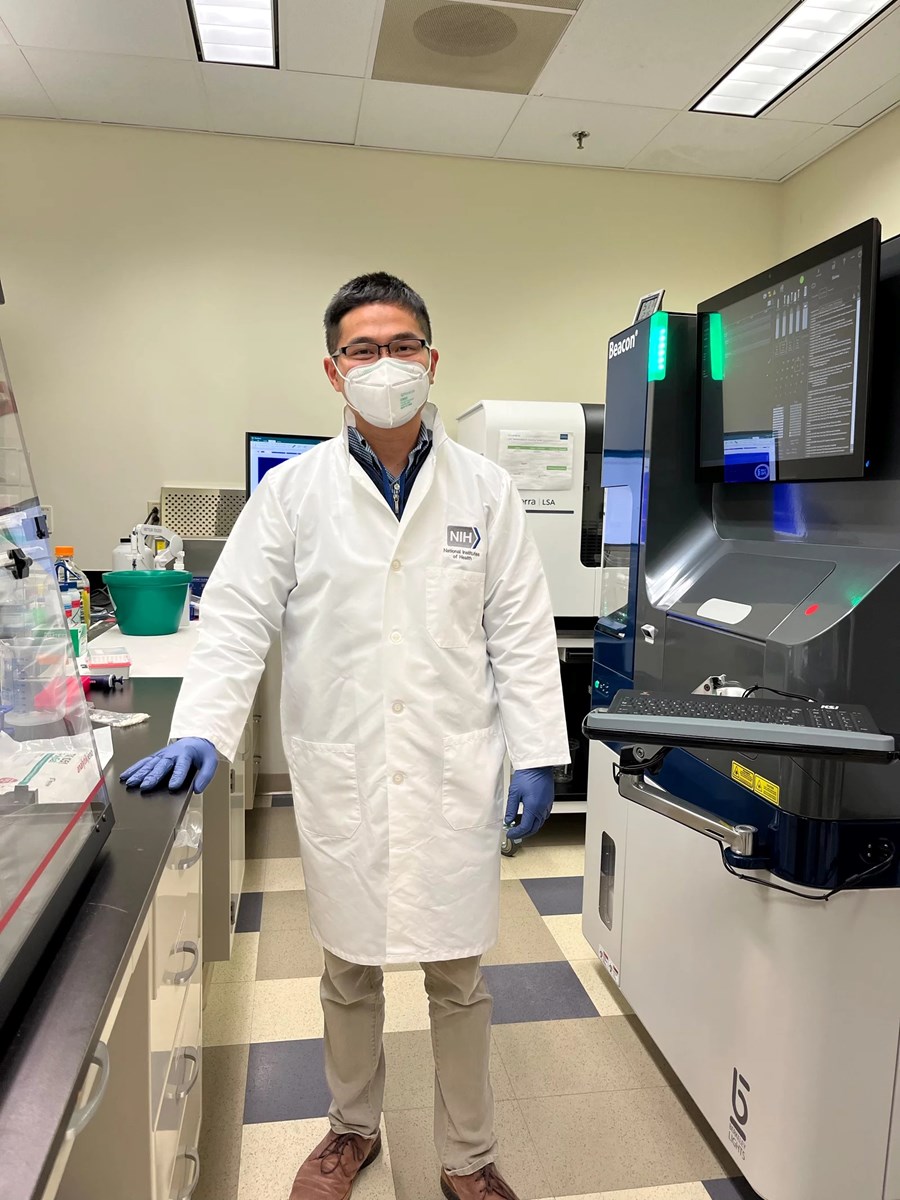 In his lab in Rockville, Md., Tan and the researchers who work with him are looking for antibodies that target parts of the virus that have stayed the same on several different viruses within the larger coronavirus family. "We're looking at other parts of the spike protein that may be more consistent and may be harder to mutate," Tan says.

To achieve this, researchers in Tan's lab are taking immune cells from the blood of patients that have recovered from COVID, and pelting them with tiny plastic pellets covered with spike proteins from different, older coronaviruses to see which cells respond. "Not the [COVID] variants, but SARS-CoV-1, SARS-CoV-2, MERS [etc.]," post-doctoral researcher Cherrelle Dacon clarifies. "These are seven different coronaviruses, all of which infect humans."

The immune cells that react to several different coronaviruses are making antibodies that bind to a part of the spike protein that's staying the same across them.

It's a painstaking process: Isolating individual immune cells, finding the ones that make antibodies in response to various spike proteins — and then using those to make more antibodies that they can scale up, analyze and test, to figure out what on the virus they're actually binding to. The process takes about three to four months each cycle, Tan says.

Tan says the good news is that they've found some antibodies that stick to multiple different coronaviruses. They published some of the results earlier this summer in Science. 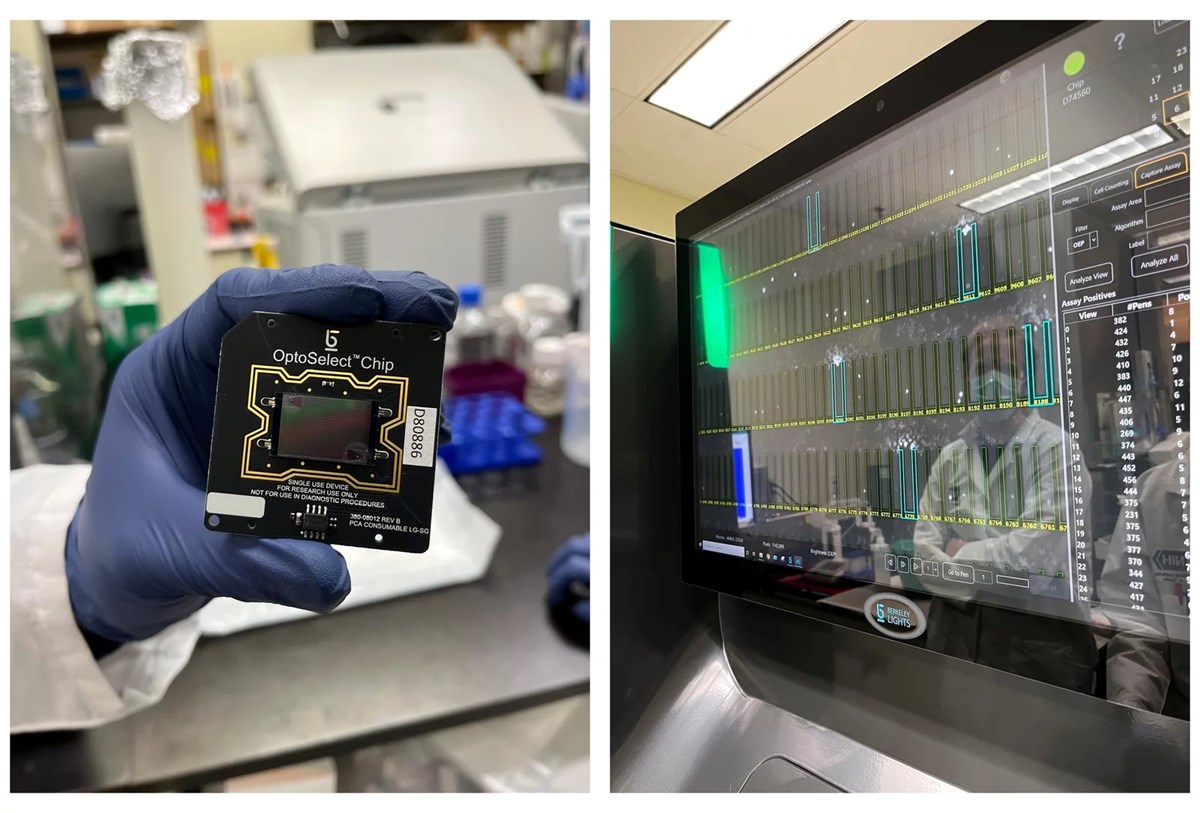 Left: Tan holds a chip ready to be loaded with immune cells that will be be sorted and tested against different viruses. Right: The screen of the Beacon, a machine that isolates individual immune cells.Pien Huang/NPR

But the problem the researchers have come up against is that the monoclonal antibodies they've found are not so potent. Tan says there seems to be a tradeoff – between how well a monoclonal antibody against COVID-19 works, and how long it lasts before the virus ditches the antibody's target.

An analogy: If the coronavirus had human body parts (which it doesn't) the old, highly effective monoclonals hit the virus's spike protein squarely on the nose. In contrast, the new monoclonals Tan is finding try to grab it by the armpit. "One of the issues appears to be that it's harder to reach those parts," Tan says, "What the broader, less potent [antibodies] need is for the spike protein to shift in shape" in order for them to grab it.

Tan is working to find ways around this tradeoff. He says you can potentially modify the antibody, change out parts of it to increase its potency – a process that's largely theoretical at the moment, and will take some time to work out.

So while Tan and other researchers work on the next generation of monoclonal antibodies – ones that work well against all kinds of coronaviruses, maybe even future pandemic ones – the nation is entering a long lull with no monoclonal antibody treatments that work against dominant strains of SARS-CoV-2.

"The disappointment is there because you're losing a really good drug," says Razonable. "But you focus on the next options. The virus adapts, and we also adapt based on what we have available."

Luckily, as Tan and others pursue the long game with antibodies, there are other treatments, like Paxlovid pills and remdesivir infusions, that still work against COVID.

And the research on and rapid development of antibody treatments has opened up possibilities beyond COVID. "It has improved the production of monoclonals for cancer, for immunologic diseases," says Dieffenbach, "It's going to be easier to produce monoclonals in the future because of the lessons learned from SARS-CoV-2. Nothing was wasted here."