Community members plant in the garden of the Assata Shakur Freedom Farm housed in the Shakur Center, home to the new Malcolm X Academy on Monday, Oct. 3, 2022.

Instead, the groundbreaking of the Oak Park school was filled with children’s laughter, while they planted purple cabbage, kale and spinach, prepared food for a weekly meal distribution program, and took jump shots on the basketball court.

It was a “free-flowing day, because we’re a free-flowing school,” said Jordan McGowan, who oversees the school’s programming and operations as its minister of programs.

The Malcolm X Academy models itself after the Black Panther Party’s Oakland Community School, with the Oakland school a direct response to Malcolm X’s 1964 call for Black people to “establish all over the country schools of our own.” While founders of the academy say it’s still an answer to Malcolm X’s call, Malcolm X Academy is also responding to ongoing gentrification in the Oak Park area and nationwide pushback to ethnic studies and classes on critical race theory, which teaches the impact of systemic racism on American structures and systems, in schools.

The K-8 school, registered in California as a private homeschool option, has six volunteer team members, including McGowan, and is located in the Shakur Center on 4th Avenue. It’s one of the community services offered through Neighbor Program, a Pan-Afrikan socialist community organization shaped by the Black Panther Party’s 10 Point Platform and Program. 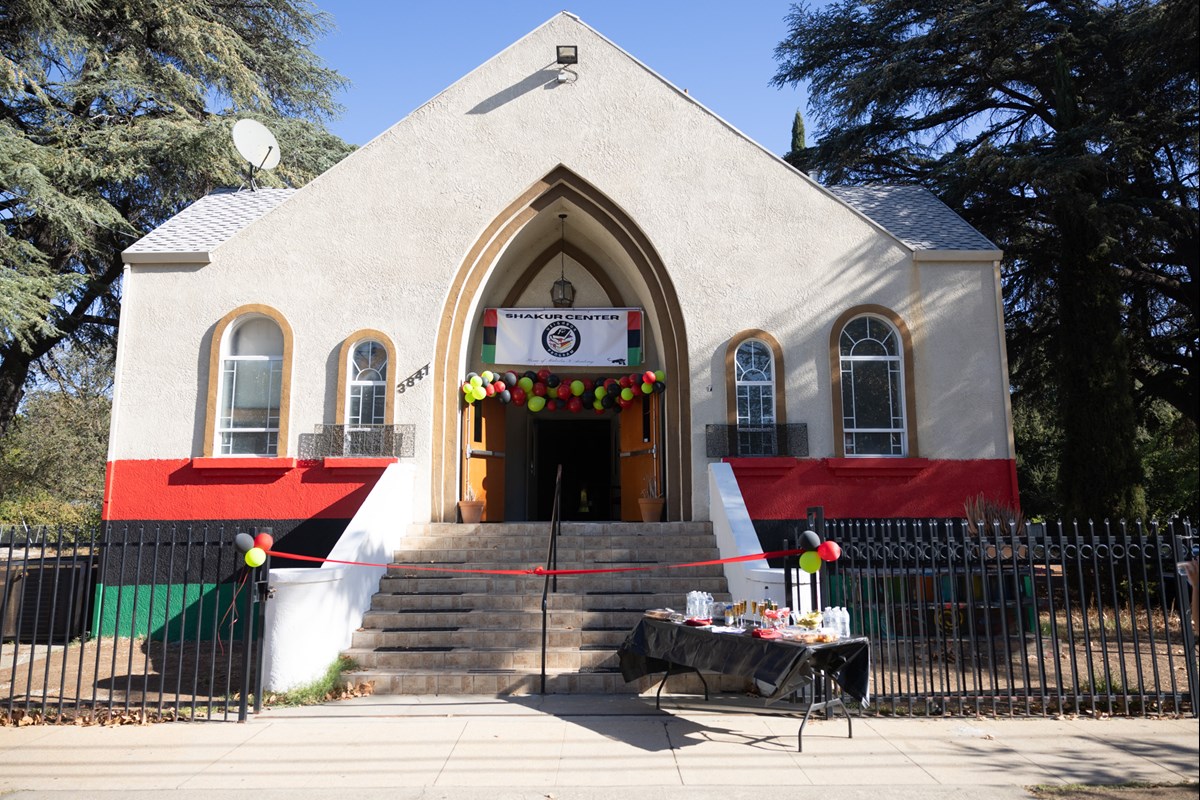 “All of these educators have had an extensive background in research and practice of these Afrikan and Indigenous practices,” McGowan, who founded Neighbor Program in 2020, said. “Bringing sports, agriculture, music and art – all of that is how most people learn regardless, but definitely the ways Afrikan people learned. So we want to return ourselves to that, to a different value system.”

The Black Panther Party flag welcomes visitors to the Shakur Center, hanging directly in front of the entrance to the center’s courtyard. The flag’s presence in Oak Park isn’t new – and its presence at the academy reflects the school’s ties to the neighborhood’s present and past.

Post-World War II, Oak Park became home to a burgeoning Black community as racist housing practices didn’t prevent them from buying homes in the neighborhood. It was there, on 35th Avenue, that the Sacramento chapter of the Black Panther Party set up an office in 1968, a year after Black Panthers came to the Capitol to protest the passage of the Mulford Act, which prohibited people from openly carrying loaded guns. The law was aimed at eliminating the Black Panther Police Patrols, which advocated for armed self-defense and appeared at sites of arrest to inform people of their constitutional rights.

Andreas Tillman, also known as Dre-T, is Malcolm X Academy’s minister of arts & culture – he’ll oversee performing arts and music lessons at the school. For the third-generation Sacramentan, seeing youth make themselves at home in the school was a reminder of Black resistance and joy in Oak Park.

“It is truly an honor to be able to uphold something in a space where my grandmother was a child running in and out of this building, up and down this block, with my father, my aunties, uncles,” he said.

The Sacramento chapter was short-lived, with the office shutting its doors in 1971 after dealing with multiple incidents of police brutality — most notably the Fathers’ Day riot of 1969 and a police killing in 1970, for which the “Oak Park Four” were falsely accused. 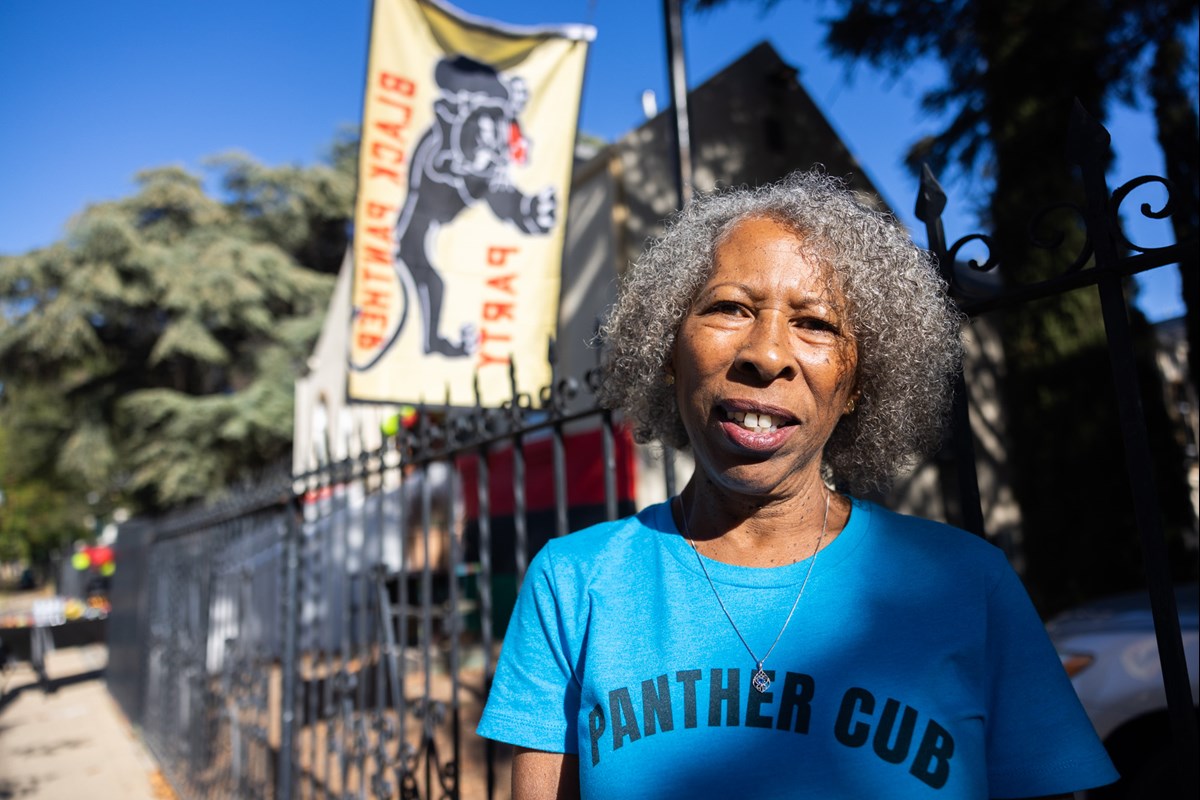 Kimberly Cox Marshall, a daughter of a Black Panther, stands outside the site for the Malcolm X Academy Monday, Oct. 3, 2022.Andrew Nixon / CapRadio

Being present at the academy’s opening brought 65-year-old Kimberly Cox Marshall, whose father — like McGowan’s — was a Black Panther in the San Francisco chapter, to tears.

The academy is “following the 10 Point Program with the kids learning their heritage and where they come from,” she said. “They’re learning everything, and that’s what I think is so wonderful – you’re not limiting a child to just what the system says we should learn.”

Black history is embedded in names of places at the Shakur Center: the Assata Shakur Freedom Farm, the Tupac Performing Arts Center and the Malcolm X Academy.

And soon, McGowan says, it’ll be visible via a mural starting from the center’s bottom floor, which will depict Africans on the shores who are painted ascending upstairs. The mural will also show a history of African resistance and independence movements, including those in Haiti and Ghana, the Underground Railroad and the Black Liberation Army.

That history is part of the education students at Malcolm X Academy will receive.

“We’ll have all types of books that are gonna allow children to see themselves again, to learn in Afrikan ways,” McGowan said. “Things that allow them to be fully human.”

Minister of pedagogy Dejay Bilal, who develops the curriculum for the school, says he anchors learning in what he calls liberation pedagogy – “a communal practice of education that is rooted in liberation, which is … freedom or escape from colonial or oppressive systems or practices.”

That can look like political education – whether through sharing oral histories, reading books, or learning through art – that empowers students to know the history of Black resistance, joy and power in America to teach others and work toward a reality without oppression.

Or it can be hands-on learning through helping with Neighbor Program’s offerings.

For example, McGowan said, when students help participate in meal distribution, they can develop math, geography and history skills.

“How do we count up meals, how do we divide these by neighborhoods to go to,” McGowan said. “Learning the geography of the city, why it’s important that all of these neighborhoods have resources.”

The structure of each in-person day at Malcolm X Academy — with drop-off between 7 a.m. and 9 a.m. and pick-up between 3 and 3:30 p.m. — is largely up to the students, though the school also offers virtual programming, half-day and service-by-service options and hopes to plan field trips throughout the year.

Community members, parents and students are invited to provide feedback on the types of activities they would like the school to provide. The school is also using the Urgency of Equity toolkit from the People’s CDC, a grassroots collective aiming to reduce the harms of COVID-19, to navigate conversations about COVID-19 safety and protocol.

While McGowan acknowledges that the labels attached to the school’s foundation — pan-Africanism, Black Panthers, socialism — may turn people off, he asks people to “investigate what we’re doing.”

“We have a health clinic, we have a legal clinic – those things are undeniably in service of other people,” he said. “We’re doing this because we genuinely love our people.”