The Sierra Nevada had only small patches of snow near the Phillips Station meadow, shown shortly before the California Department of Water Resources conducted a snow survey on April 1, 2022.

As California’s 2022 water year ends this week, the parched state is bracing for another dry year — its fourth in a row.

So far, in California’s recorded history, six previous droughts have lasted four or more years,  two of them in the past 35 years.

Despite some rain in September, weather watchers expect a hot and dry fall, and warn that this winter could bring warm temperatures and below-average precipitation.

Conditions are shaping up to be a “recipe for drought”: a La Niña climate pattern plus warm temperatures in the Western Tropical Pacific that could mean critical rain and snowstorms miss California, according to Daniel Swain, a climate scientist with UCLA and The Nature Conservancy.

Swain said California’s fate will depend on how exactly the storm track shifts, and that seasonal forecasts are inherently uncertain. Even so, “I would still put my money on dry, even in the northern third of the state,” he said. “It’s not a guarantee. But if you were to see 50 winters like this one, most of them would be dry.”

Through August, no other three-year period in California history has been this dry — even during the last historic drought from 2012 through 2016.

“Or did the last drought end? Which is the bigger question,” said John Abatzoglou, a professor of climatology at UC Merced. “We’re basically having droughts that are disrupted by wet periods.”

California has seen lengthy droughts before, including two seven-year droughts that started in the late 1920s and 1940s. A more recent one lasted six years, from 1987 to 1992.

“To get these kinds of years, we have to go back to the late 1920s and the 1930s, which were the Dust Bowl years,” said California state climatologist Michael Anderson. He tallies far more dry years than wet since the turn of the millennium. “If you look at the 21st century, we really only have a handful of wet years to work with.”

It’s not just the lack of rain and snow. Warmer temperatures, too, are exacerbating California’s droughts. January through August ranked as California’s fifth warmest year to date, following 2021’s warmest summer on record.

“One thing that is unfortunately becoming easier to anticipate are warmer than average conditions due to climate change,” Swain said.

The heat contributes to a thirstier atmosphere, plants and soils, which increases demand and reduces runoff that flows into reservoirs. “That’s taking what’s already been a really rotten, worst-in-the-instrumental-record precipitation drought, and making it into even a worse drought,” Abatzoglou said.

Winter is coming. But will it rain?

What the coming water year, which begins Oct. 1, will bring is still up in the air. But La Niña conditions are highly likely to continue through at least the fall, with an 80% chance of persisting through January, for a third year in a row.

A “three-peat” La Niña is rare: It has happened only twice before since record-keeping began. La Niña occurs when ocean temperatures in the Eastern Tropical Pacific are below normal, which can shift the storm track that California depends on.

“Seeing things that we’ve never seen before is very much on the table,” said John Yarbrough, assistant deputy director of the State Water Project, which funnels water from Northern California to 27 million people and 750,000 acres of farmland.

Often La Niña means drier conditions in Southern California, but the effects on Northern California watersheds critical to the state’s water supply can be harder to predict, according to Julie Kalansky, deputy director of the Center for Western Weather and Water Extremes at the Scripps Institution of Oceanography.

“Every year is such a unique story for water, which makes California exciting, but it also makes it hard to predict and say what will happen,” Kalansky said. 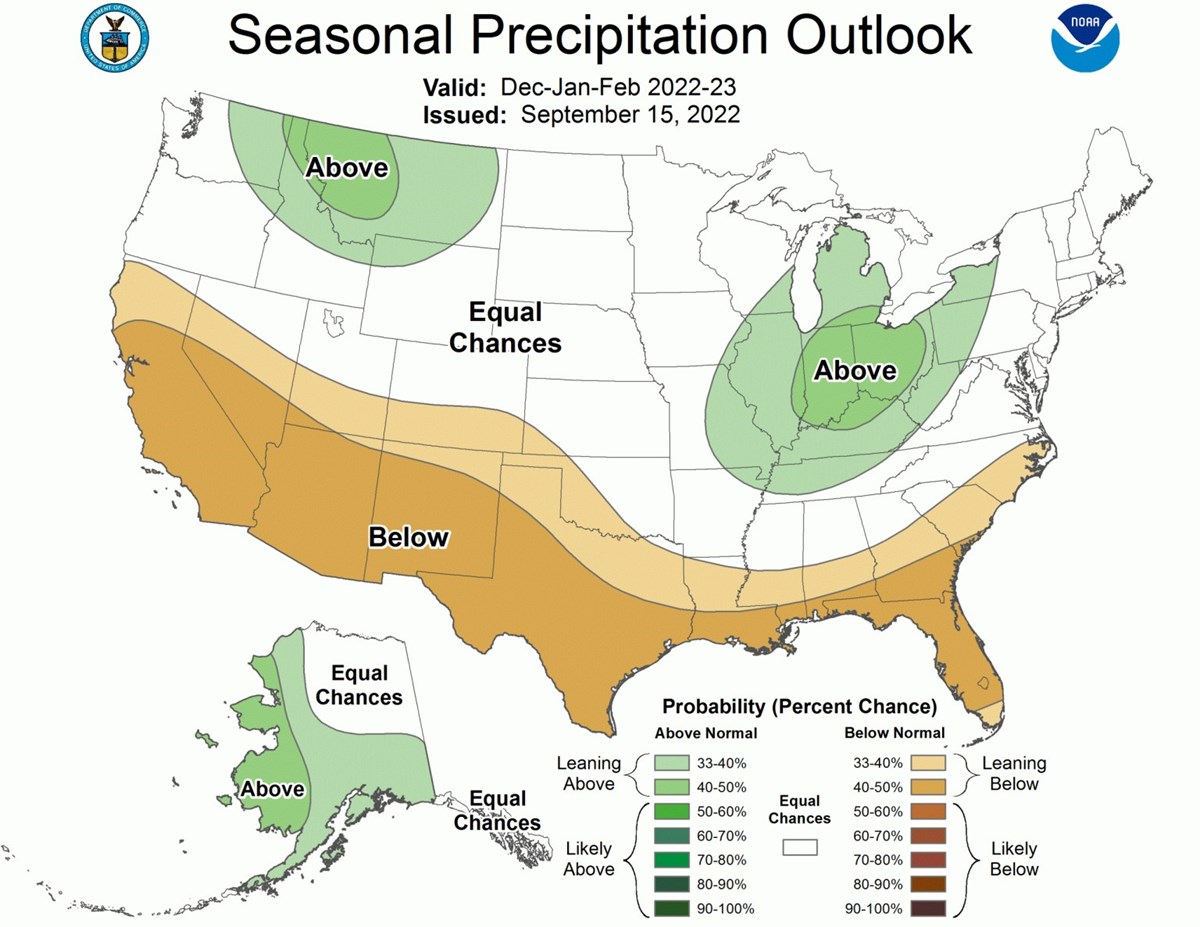 What will ultimately shape the next water year is the number of storms known as atmospheric rivers that make landfall, and the amount of precipitation they unleash. The timing, too, will be important, Anderson said: when rain and snow falls can affect how much of California’s precious snowpack rushes into reservoirs or soaks into the soil.

“From the water management standpoint, we’re being mindful that it very well could be dry,”  Yarbrough said. “At the same time, we’ve got to be mindful that it could be very wet and you could have flooding. Both of those still are possible.”

Dry spells punctuated by wet years are part of “the California story,” Abazoglou said. “But obviously the last decade has shifted the balance towards more droughts.”

Snow, too, is difficult to predict for the year ahead.

This past year was a strange one for the ski industry, he said — marred first by wildfires that damaged the Sierra-at-Tahoe resort, then by extreme snowstorms at the end of December that forced some resorts to close.

“In the holiday period, some resorts lost full days that would have been huge, huge revenue days,” Reitzell said. “That certainly does put a ding in things.”

This year’s snowpack measured at 38% of average statewide, at a time when it should have been its deepest on April 1. It was the worst snowpack in seven years and the sixth lowest April measurement in state history. The 2015 snowpack was the lowest on record. 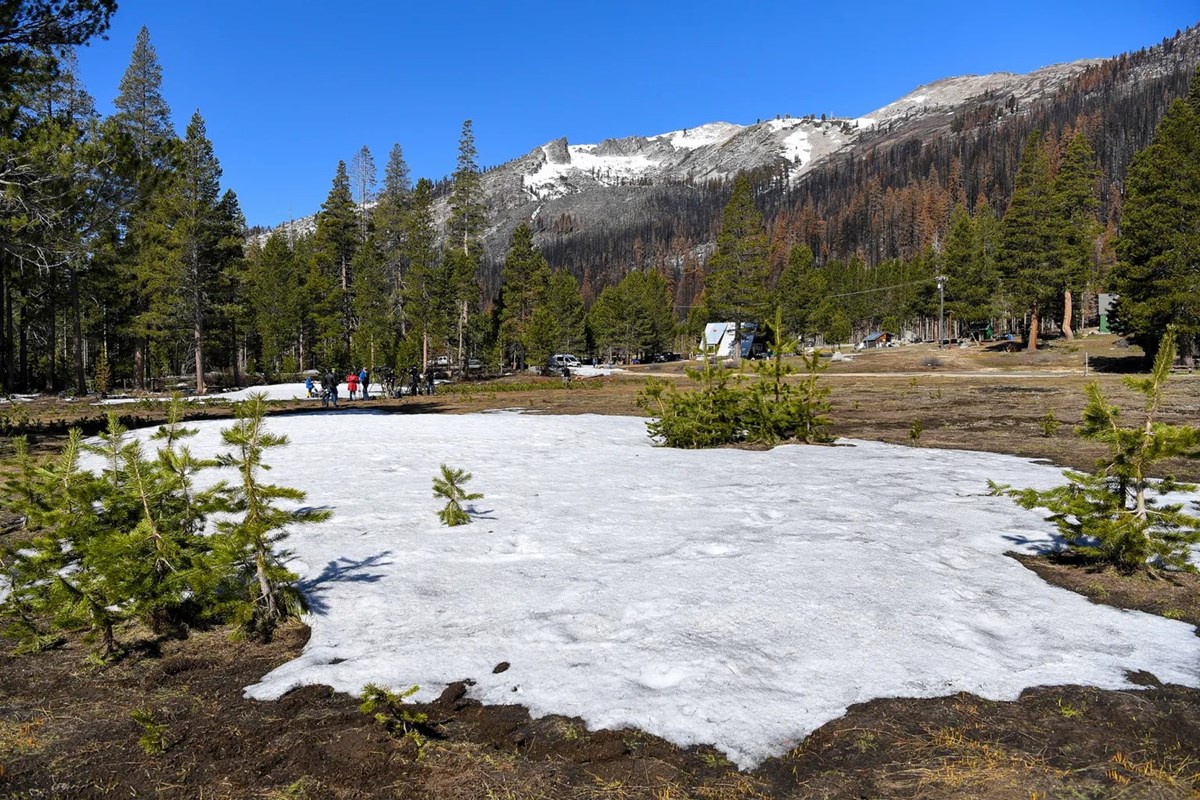 Very little snow remained on the ground for the state’s snow survey in the Sierra Nevada on April 1, 2022.Ken James / California Department of Water Resources

The measurement came on the heels of a record-setting dry spell from January through March, with warm temperatures spurring an early season melt. This kind of early melt is difficult to recover from, said Andrew Schwartz, lead scientist and station manager at the University of California, Berkeley’s Central Sierra Snow Lab.

“Our soils get dry and soak up any additional rain or snow that comes in, so that doesn’t make it to our reservoirs. And then we get these mass forest die-offs and subsequent forest fires,” Schwartz said.

He agreed it’s hard to say what La Niña will mean for the Sierra Nevada this winter. He said “some absolutely massive snow years” have happened during La Niña years.

“But we’ve also had some of the worst years on record happen here. So the La Niña doesn’t look like it’s going to play too much of a role up here, because traditionally it hasn’t,” he said. “With that being said, I’m expecting drier and warmer than average conditions.”

California is entering the next year with a water deficit unlikely to recover with an average year of precipitation.

Groundwater levels in almost two-thirds of wells assessed have sunk below average, and by the end of August, reservoir storage had hit 69% of normal for the date. It’s an improvement over last year, when reservoir levels had dropped to just 60% of average for the date.

Lake Oroville, at 1.24 million acre feet, remains below the 1.6 million acre-foot threshold that managers would like to see by the end of the year before considering exports. Last year, deliveries from the State Water Project dropped to 5% of requested supplies in March.

Initial water allocations are expected to be announced Dec. 1, and Yarbrough would not say what they were likely to be. Still, he said, “Do expect it to be on the lower end.”

The US Bureau of Reclamation, which operates the Central Valley Project, also would not say how much water its recipients, including Central Valley growers, can expect next year. That announcement will come in February, spokesperson Mary Lee Knecht said.

But Ryan Jacobsen, CEO of the Fresno County Farm Bureau, is not expecting the news to be good.

“We find ourselves going into this year with such a substantial decline over the course of the previous three years that even an average year most likely is going to mean some not good allocations to farmers down here in the Valley,” he said.

Jacobsen said local growers already have cut back on plantings for fall and winter crops. He expects even more fields to be fallowed as farmers decide not to plant annual crops like tomatoes, melons and corn to preserve their scarce water supplies for permanent crops like tree nuts and grapes.

One source of California’s water supply is in even more dire shape than in previous droughts: the Colorado River, which remained a reliable source of water supply even during California’s 2012 through 2016 drought. This time the river’s massive reservoirs have hit historic lows.

“The Colorado River system is in deep crisis,” said Alex Hall, a professor of atmospheric and oceanic sciences at UCLA. “That means Southern California is in a more difficult position than in the past.”

Southern California’s giant water importer, the Metropolitan Water District, issued unprecedented outdoor watering restrictions last spring for the 6 million people in its vast service area that depend on supplies from the parched State Water Project. Over the last three years, the water district has received its lowest total deliveries from Northern California reservoirs.

Now, the water importer is weighing how potential future cutbacks on the Colorado River could affect the rest of its customers as California, Arizona and Nevada hash out a deal to conserve the river’s water, said Demetri Polyzos, Metropolitan’s manager of resource planning.

“People are saying ‘Hey, we’ve gone through this before. California is used to droughts,’”  Polyzos said. “That is true. But we’re seeing these things get a lot worse and worse and more difficult to manage through.”

What is becoming increasingly clear is that the nature of drought in the West is changing from the plural to the singular as it endures for long stretches punctuated by brief spells of wet years.

“The idea of drought as a temporary, transient thing is shifting,” Swain said. “We should be thinking more about long-term aridification.”