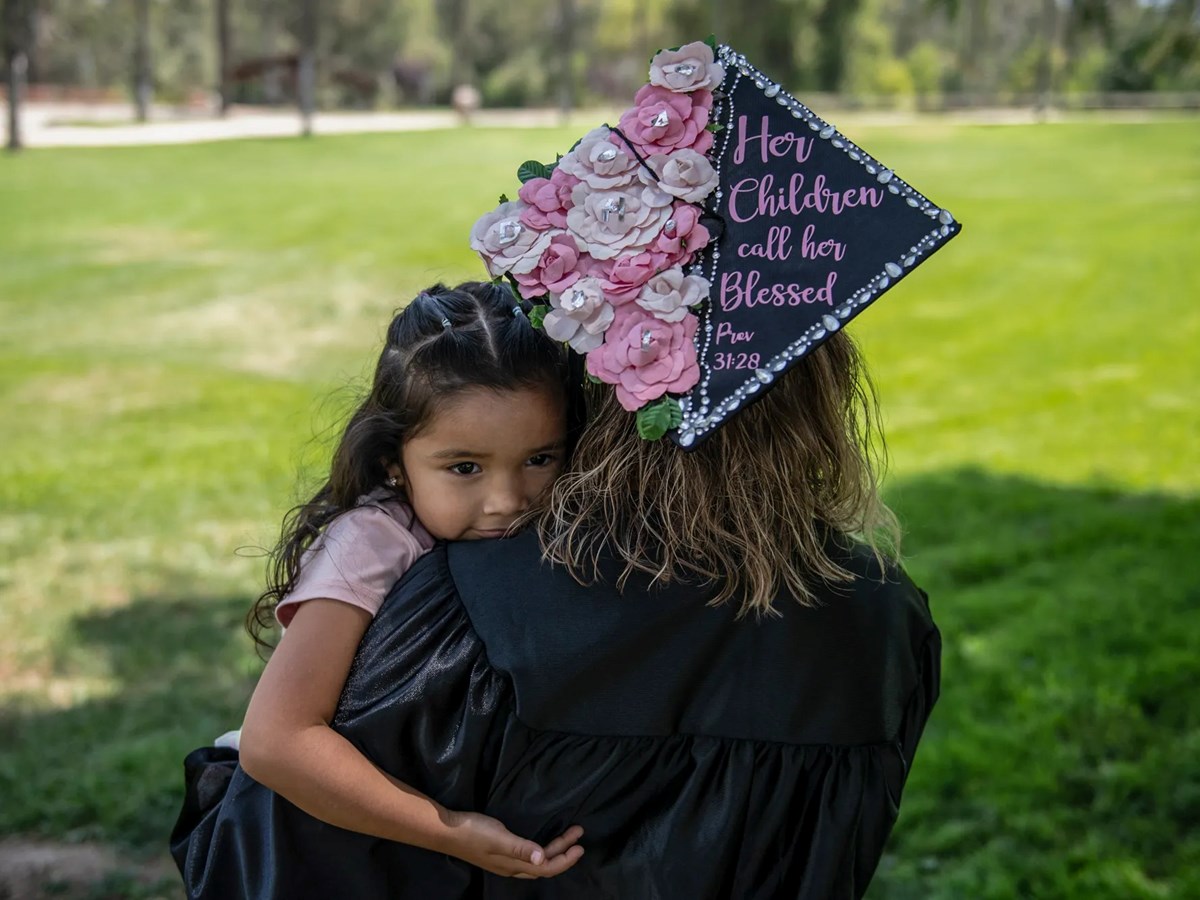 When Charity Machado had her first child, Cali, at the age of 15, she expected many of the sacrifices that came with being a young mother, but was determined not to let her education be one of them. Machado completed her general education requirements at Sacramento State before transferring to the nursing program at CSU Stanislaus in 2020.

The COVID-19 pandemic hit six months after her transfer, shutting down schools and daycare centers overnight.

Cali, now nine years old, remembers the transition to remote learning as “kind of crazy.” Machado recollects “survival mode.” Dishes and laundry piled up to the point where Cali and her 4-year-old sister knew that plates would be in the sink and clean clothes in the dryer.

Her mother helped with childcare and household chores, but Machado still struggled to keep up with her own studies on top of Cali’s.

“And that made me feel really bad,” Machado said. “Because I’m trying to instill the importance of education, and then there I was neglecting her schooling in order to complete mine.”

According to a March 2021 report on student parents from the Institute for Women’s Policy Research, what Machado experienced is common and is known as “time poverty.” It is one of the most often cited reasons why, nationally, over half of parents who enroll in college for the first time end up dropping out within six years without attaining a degree.

That’s part of the reason why Machado’s graduation, along with those of her fellow student parents, represents a special moment of triumph and celebration. Their educational journeys —  during which they juggled parenthood, classes and an ongoing global pandemic —  also provide insight into how California’s higher education systems can better serve this growing group of students.

While the disruption caused by COVID-19 exacerbated many of the obstacles student parents face in their day-to-day lives, it also pushed colleges to experiment with hybrid instruction and flexible due dates, making academic life more manageable for some.

Among the student parents graduating from California community colleges this year was Yessenia Cervantes.

Graduating from Riverside Community College was especially sweet for Cervantes, since she already had to drop out once, after she separated from her husband and had to leave her home. Managing remote learning while living in hotels and with family members was often overwhelming, Cervantes said, largely because she lacked access to reliable Wi-Fi or hotspots.

“There were also a few times where we walked to McDonald’s, which was across the street, to connect to the free Wi-Fi. Ultimately it was too much work, where I decided to withdraw from my spring term 2020 and did not continue (for) fall term 2020. And my children were also not able to finish the remaining two months of school,” she said.

A year later, now with stable housing, a new van and reliable internet access, Cervantes “returned” to RCC in January 2021 —  this time remotely and alongside her kids as they attended their own virtual classes.

Cervantes said that not having to commute to drop off and pick up her kids helped to ease some of the scheduling pressures. It was special that her kids saw the work she was putting in for the family, she added.

“It’s not the same every single day; one day can be marvelous and the next not,” she said. “It’s not perfect, but I like that my kids are there, they see me cry, they see the struggle, and, you know, it’s little things like that.”

The expansion of remote learning accelerated by COVID-19 created increased flexibility for students like Cervantes as “it eliminated travel time to school while reducing transportation costs such as parking,” the Institute for Women’s Policy Research report notes.

Arnoldo enrolled in 2018. A year later, while sitting in his communications class, he locked eyes with Olivia, a fellow student working on her associate’s degree in sociology. The duo married in an intimate backyard wedding in February 2021. That fall, they welcomed a baby boy, Manuel, into their young family.

Both were determined to continue their education and earn their degrees. For Arnoldo, the ability to watch classes on his own time was a lifeline.

“The asynchronous classes I really vibed with. Those ones are much easier to keep track of stuff,” he said. “So, you know, asynchronous was better for me.”

Beyond time constraints, expenses such as childcare and food make college nearly twice as costly for student parents as it is for their counterparts without children, according to a recent report from the California Student Aid Commission.

The average additional cost per child to attend college in California is $7,592, estimates California Competes, a research and advocacy group focused on higher education and the workforce. The cost varies by region, from $7,143 in the Inland Empire to as much as $10,000 in the Bay Area. .

Student parents who receive financial aid through the state’s CalGrant program can qualify for an additional grant of as much as $6,000. But demand for Cal Grants exceeds the amount the state offers, a problem some lawmakers are trying to fix.

Cervantes said state and county-funded programs helped her cover some essentials including groceries, school supplies and gas, as well as her cap and gown for graduation. 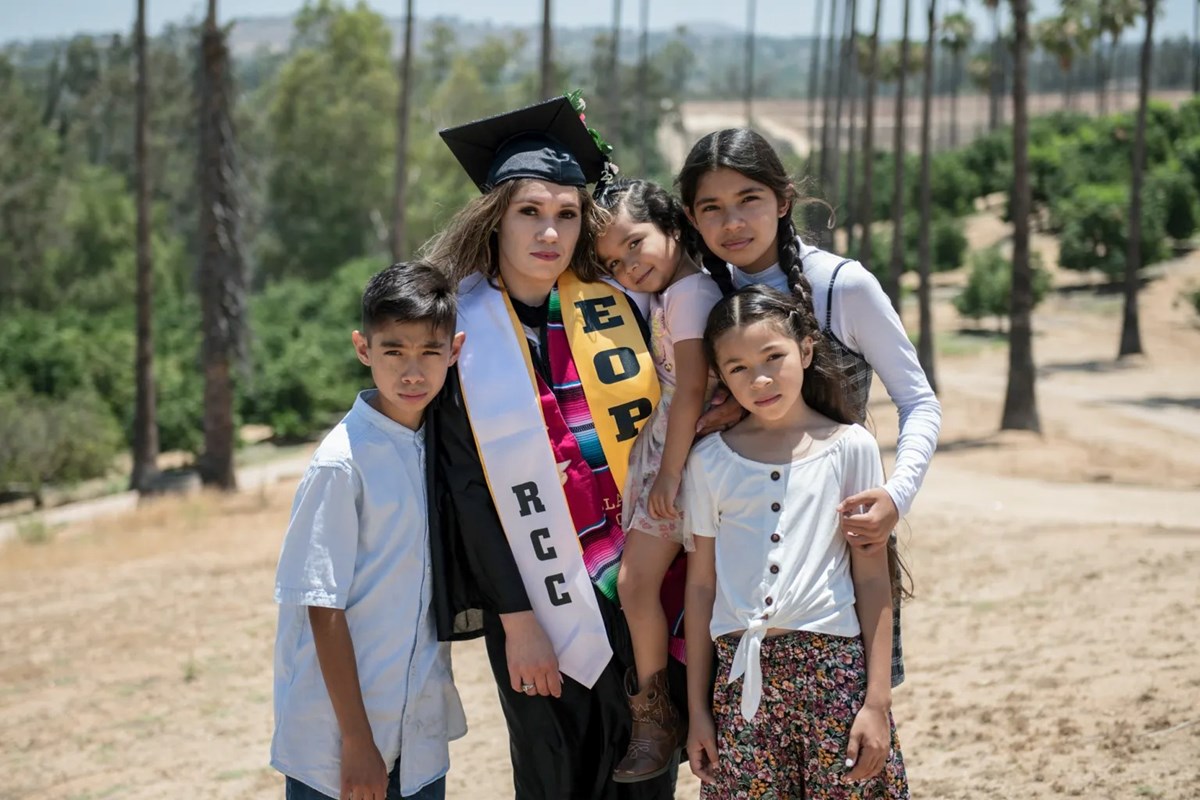 Yessenia Cervantes, 34, stands for a portrait with her four children at California Citrus State Historic Park in Riverside on June 17, 2022.Pablo Unzueta / CalMatters

For many student parents, though, the cost of childcare alone can be crippling.

Stephanie Webb, a parent of a three-year old and doctoral student in environmental studies at the University of California Santa Cruz, enrolled her son in daycare when he was an infant, cobbling together two half days per week so she could have time to work on her dissertation.

“I was paying so much for daycare, piecemealing it together. Every little 40 minutes of work was just vital,” Webb said. It also was expensive. The half days cost $750 a month. With the daycare center located 35 minutes from her home, Webb studied at a nearby Jack in the Box to avoid spending more time and money on the commute.

The game changer came when a subsidized child care center at UC Santa Cruz told Webb it had an opening for her son. She had originally signed up when she was five months pregnant. Two years later, she was off the waitlist.

Webb finally could devote more time to her studies and feel secure that her son was in a nurturing environment where he received three square meals a day, something Webb could not always afford at home.

According to University of the Pacific sociology professor and student parent researcher Susan Mannon, years-long wait times for campus child care facilities are not uncommon.

“I also work at Sacramento City College, and you know, the waitlist for their childcare center is just astronomical; we can’t even hope to get on it,” she said.

Mannon said waitlists are so long in part because colleges are spending less money on on-campus childcare than they did in the past.  For Mannon, seriously supporting student parents would mean institutions investing resources in accessible, affordable childcare options.

“You know, they talk the talk, but they don’t walk the walk at all. But I mean, childcare is an obvious one. I mean, if you could have onsite childcare, it would make a huge, huge difference.”

Even with child care solved, Webb still struggled to afford California’s high cost of living. The breaking point occurred this spring when she realized that she might not graduate after seven years of being a graduate student at UCSC. Unlike other students, Webb could not take a leave of absence to finish her dissertation. She needed to stay enrolled at UCSC — and pay tuition — to qualify for childcare. But the responsibilities were piling up.

“I sent an email to everybody in my department and the social studies department and was just like, ‘Hey, I’m never going to get out of here if I have to TA (teach) or GSR (do research for a professor’s project) and do my dissertation and be a parent,’” Webb said.

Webb asked them to help cover her $4,600 quarterly tuition. The email worked. A university resource center for non-traditional students  stepped in, helping Webb apply for scholarships that ended up covering most of her tuition.

Webb’s situation resonated with the mission of the center, known as STARS, said its program director, Jannet Ceja.

“She really needed the funding to finish her program and get childcare. And this was the quarter when it all had to happen,” Ceja said. Webb is now set to graduate in August.

Similar experiences to Webb’s were outlined by researchers in the UC Davis report on student parents in California community colleges. It emphasized the impact that campus-based resources and support staff can have on students’ chances of earning their degrees. “Increasing access to local supports” and “increased program flexibility” would help campuses to retain student parents, the report’s authors found.

A bill pending in the Legislature would mandate some of the policies the report recommends. Introduced by Assemblymember Marc Berman, a Palo Alto Democrat, Assembly Bill 2881 would require public colleges and universities to give student parents priority registration for classes so they can build more accommodating schedules. They would also be required to create web pages for student parents with links to campus resources and tips on how to apply for federal Women, Infants, and Children grants.

Priority registration could make a big difference for student parents, said Olivia Fernandes, who like her husband is headed to Sacramento State in the fall.

“It’d be a lot more helpful to be able to pick the classes that we actually need, that won’t put us in situation of, like, now we have to tell our professor, ‘I know I signed up for your class, but I can’t attend mandatory seven o’clock meeting on Zoom because I have my child to take care of,’ ” she said.

Mannon said another basic, but important step institutions can take is to learn how many student parents they actually serve — a number not recorded on many campuses.

“The low-hanging fruit is just identifying your student parent population, right —  understanding who they are, how many you have, and what their needs are.”

For Machado, the CSU Stanislaus nursing student, the stress and sacrifice of schooling paid off. By graduation, a local hospital had offered her a job in its labor and delivery unit, and Machado said she was looking forward to the next chapter in her life.

At her commencement ceremony in May, when it was time to place the pin on Machado’s white coat, Cali joined the stage with her mother.

“She has been a part of my whole schooling journey. So, it’s special,” Machado said.

Margaretten is a contributor to and Taylor is a fellow with the CalMatters College Journalism Network, a collaboration between CalMatters and student journalists from across California. Reagan is the Network’s program manager. This story and other higher education coverage are supported by the College Futures Foundation.