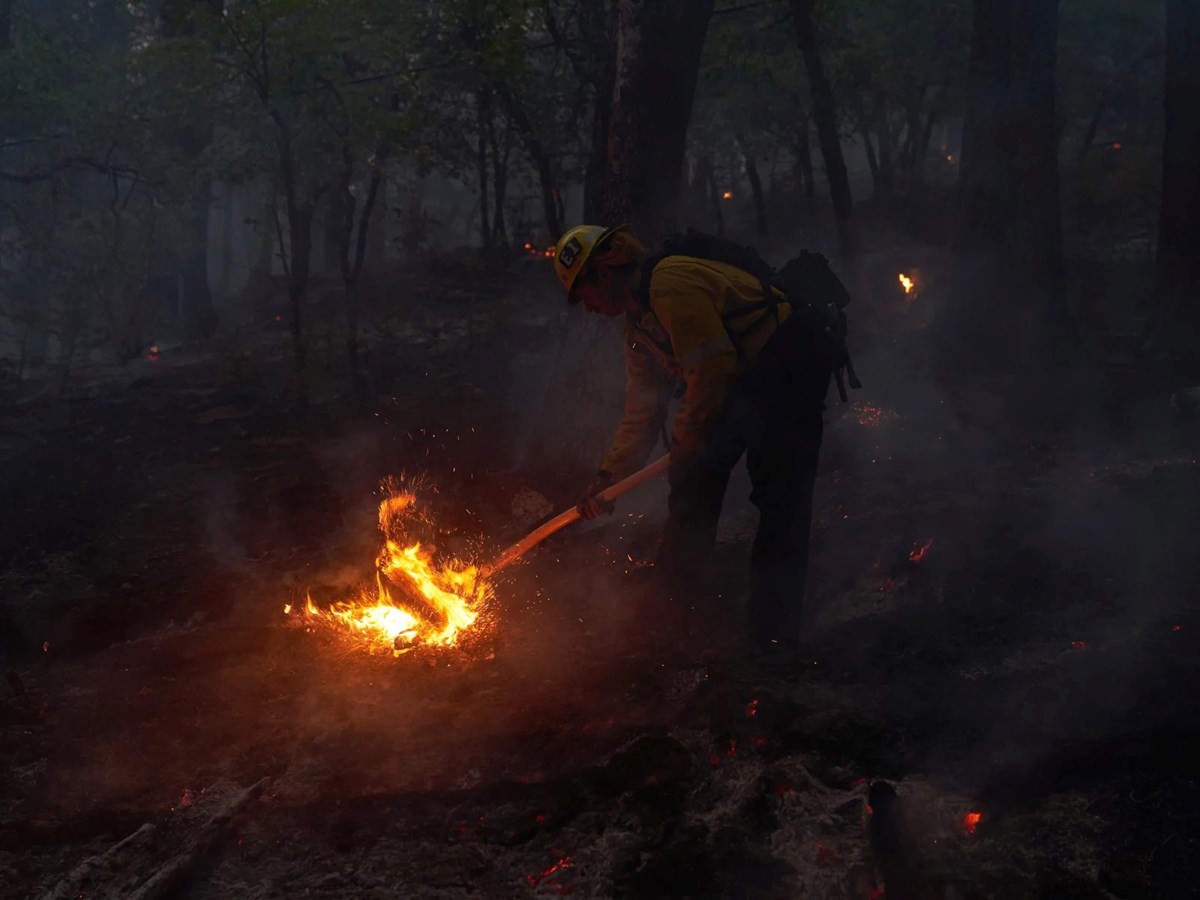 Firefighters battle flames as the Dixie Fire pushes through the Genesee Valley in California in August 2021. The fire was California's largest single wildfire in recorded history, burning nearly 1 million acres.

For over a decade, the U.S. Forest Service has faced retention and recruitment issues that have resulted in a depleted workforce while fire seasons worsen and the Biden administration is increasing pressure to reduce wildfire risks across the West.

Federal wildland firefighters have entered another fire summer of broken records. The two largest wildfires in New Mexico's history, the Calf Canyon-Hermits Peak Fire in the Santa Fe National Forest and the Black Fire in the Gila National Forest, are currently under way, prompting a visit on Saturday by President Biden. Fire seasons, warns the Agriculture Department, are becoming longer and harder to control leading to intense "fire years."

And firefighters are also tasked with carrying out the administration's 10-year plan for reducing the risk of wildfires, which would involve increasing work on 50 million additional acres of land.

But continued low wages, benefits and staffing have depleted morale among the ranks and despite congressional and Biden administration action, eyes are on the agencies and Congress to deliver solutions.

Federal wildland firefighters are spread across the Agriculture and Interior departments and within agencies that fall under them, such as the Forest Service, Bureau of Land Management and the Bureau of Indian Affairs. This unique workforce is the first line of defense for public lands and also has the capability to travel across state lines and country borders to fight fires.

According to May staffing data provided by the Forest Service to NPR, six out of nine regions have staffing levels below last year's hiring peak, which around July was 11,480 employees. The biggest vacancies are in the Pacific Northwest, which is 24% below, and California, which is 15% below.

A wide variety of factors contribute to the shortages, including noncompetitive pay and lack of affordable housing, according to the Forest Service.

Data obtained by NPR on California's May spring fire hire rates shows the state, which makes up its own region, has 1,637 vacancies.

"Already in Oregon, there is a 20% vacancy rate in these positions and Western states are actually trying to borrow firefighters from each other," said Sen. Ron Wyden, D-Ore., during a Thursday hearing featuring Forest Service Chief Randy Moore. "Chief, that is a recipe for trouble."

"Firefighters who do not get the raise will undoubtedly feel undervalued and many will certainly quit," Erwin wrote. "Recruitment and retention in these locations will go from difficult to impossible, which would significantly jeopardize our nation's ability to fight wildfires and protect communities." 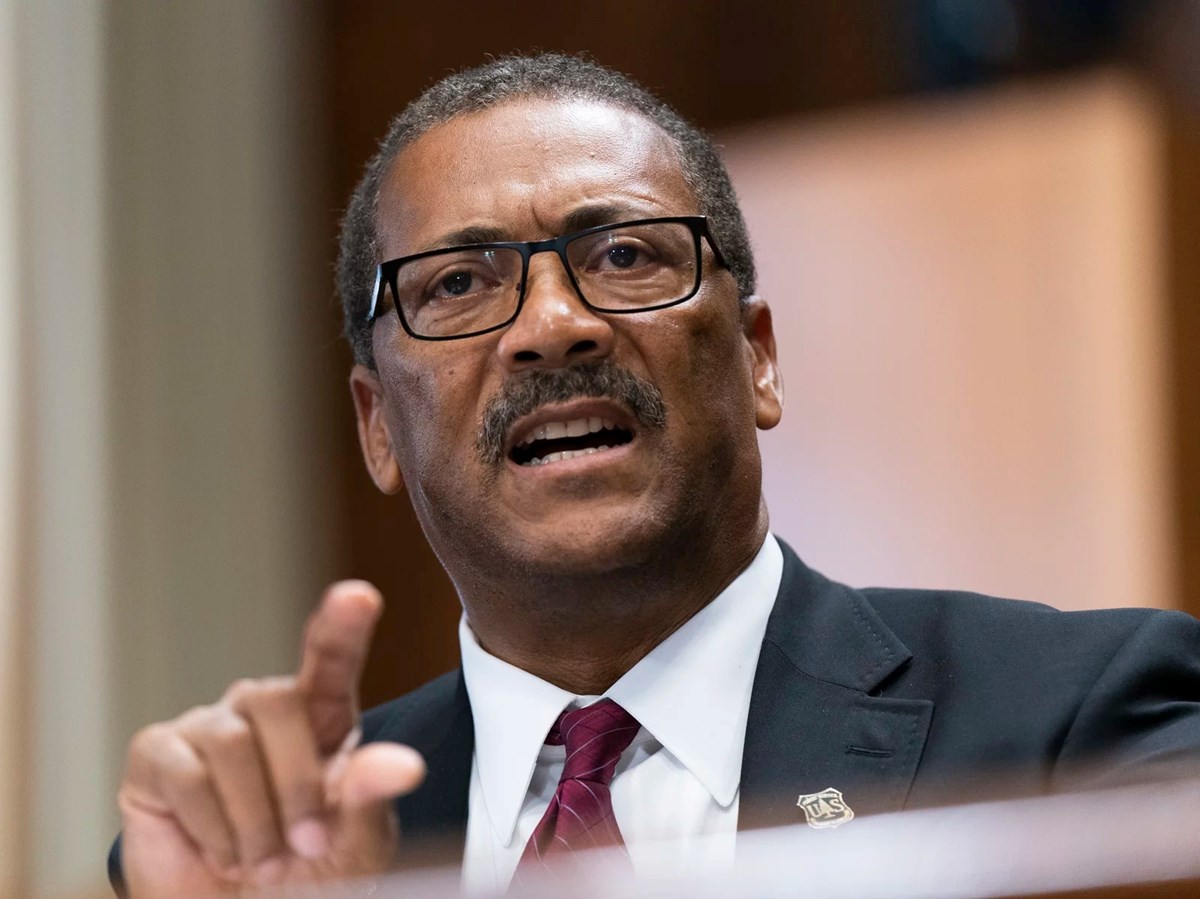 Shortages strike across the West

In a 2010 special hearing, officials were questioned by lawmakers over the shortages, including among senior-level firefighters. But while staffing shortages have continued, higher cost of living and pay elsewhere has also increased — putting at risk the federal response to wildfires and preventing them.

In nearly every hearing Moore has appeared in since taking his post last summer, he has received questions from senators and representatives regarding staffing capacity and wages. Meanwhile, federal firefighting groups have even taken to social media calling for applicants to open positions.

Moore told lawmakers on Thursday that as of June, the department has hired 10,184 firefighters. That's 90% of the 11,300 targeted for this year, he said.

In the breakdown of vacancies shared with NPR, Region 1, which includes parts of Idaho, Montana and North Dakota, is down 13% from its peak; Region 4, which includes more of Idaho, Utah, Nevada and Wyoming, is short 9%; Region 3, New Mexico and Arizona, is down 6%; and Region 2, which is more of Wyoming, Colorado, South Dakota, Nebraska and Kansas, is down 3%.

Some regions, including 8, 9 and 10, which make up the Southeast, Northeast and Alaska, are facing staffing levels 12 to 30% above last year's peak.

In a hearing at the start of May, Moore cited the same 90% statistic — adding that some regions were, at the time, facing more dire vacancy levels of up to 50% and that although offers were going out, the department was facing declinations as they are unable to compete with higher paying industries and companies.

But advocates are skeptical about the 90% statistic because they say it could include hires that have not started yet, will never show up, or may have even applied and secured roles in multiple regions.

"People would apply in October and we would do the hiring in December and they don't come on until May so in that period of time most people have found another job and so we counted somebody as hired but you have no idea if they are going to be there until the day they are supposed to show up," said Maximo Alonzo, an NFFE representative who used to manage temporary hires.

Rep. Katie Porter, D-Calif., who has previously questioned Moore on staffing levels, told NPR that her office is hearing of regions that are understaffed as well.

"The reality is we are dealing with a workforce that was built for the era of before we had this year-round extreme weather and fire season," Porter said. "It's bad for our firefighters, it's bad for our natural resources and it's bad for all of us as taxpayers. It is expensive to have to bring in last-minute resources to hire contractors, to hire from a local fire department. The worse the staffing situation, the more the price goes up for taxpayers and we need to be prepared for what's ahead."

Firefighters called for an increase in pay

While the $2 increase was applauded by worker advocates, agency leaders and employees, many agree that it is still not enough. Firefighters are forced to rely on overtime pay, which can total over 1,000 hours in a summer, a risky bet in a job that could lead to injuries or extended time off. Managers have suggested to some firefighters that they start a GoFundMe or referred them to charities to offset lost income.

"The $15 was not enough before they even did it," said a federal wildland firefighter of 15 years who spoke on the condition of anonymity out of fear of retaliation. "That's just the federal minimum wage. So it doesn't seem appropriate to be paying wildland firefighters, who are doing super-dangerous work with unique and abnormal schedules, it doesn't make sense that they're paid the lowest that you could pay anybody. Especially with how necessary the work is."

Then in November, Biden signed into law the bipartisan infrastructure bill. The bill included $600 million for the Agriculture and Interior Departments to increase their firefighter wages. Specifically, $480 million would go to USDA's Forest Service to create a "pay supplement" for workers of $20,000 or 50% of their salary, whichever is less.

The money is estimated by officials to last about two years and will be retroactive to October 2021. Moore told lawmakers on Thursday during the hearing that checks are expected to start going out by the end of the month.

"While the pay provision in the bipartisan infrastructure law is really important ... it's not a permanent fix," said Deputy Forest Service Chief Jaelith Hall-Rivera during a Forest Service employee-only town hall on May 25 for which the recording was obtained by NPR. "And we know that and really our goal is to get towards a permanent pay increase for our wildland firefighters."

The bill requires the pay increases to be applied in hard to recruit and retain geographic areas and officials are working for that definition to be as broad and inclusive as possible, Hall-Rivera said during the town hall.

"I'll tell you what that geographic area is: the United States of America," said Sen. Angus King, I-Maine, to Moore during the hearing on Thursday. "Tell [Agriculture Secretary] Tom Vilsack. Anybody in this room could tell you. It's difficult to retain and hire firefighters anywhere, particularly in the West."

But Congress imposed the geographic retention and recruitment requirement even if Vilsack will ultimately decide who is eligible to receive the supplemental pay.

Advocates are urging Vilsack to declare all areas as hard to recruit and retain in order to promptly deliver the funding and move on to finding a more permanent solution.

"It's not even a pay raise. It's actually a stipend. It's a supplement," said Kelly Martin, president of Grassroots Wildland Firefighters, an advocacy group pushing for higher pay. "So it doesn't even affect their hourly wage. It doesn't help with their retirement savings."

The bipartisan infrastructure bill also required the Office of Personnel Management (OPM) to create a new classification series for federal wildland firefighters, which could increase the wages for some.

Officials told firefighters on the May 25 call that there are still a lot of unanswered questions. For example, Congress requires that the new firefighter series be finalized by OPM within 180 days of the law being enacted. The result of the sped-up time frame is Forest Service officials and employees will not be able to see a draft of what the new work series is, only a finalized version.

Officials told employees that they are still working to figure out what to do when the infrastructure bill funding runs out and the pay supplements stop — effectively creating a cliff for wages. One of the options is requesting a special salary rate and implementing it in time for when the funding runs out.

But officials noted even that has its hurdles, including making sure that Congress itself provides additional funding for salaries to support any increase in wages.

In the budget request for the next fiscal year, the Forest Service has asked for $1.15 billion for wildland fire management salaries and expenses but lawmakers will draft their own legislation regardless of the budget asks.