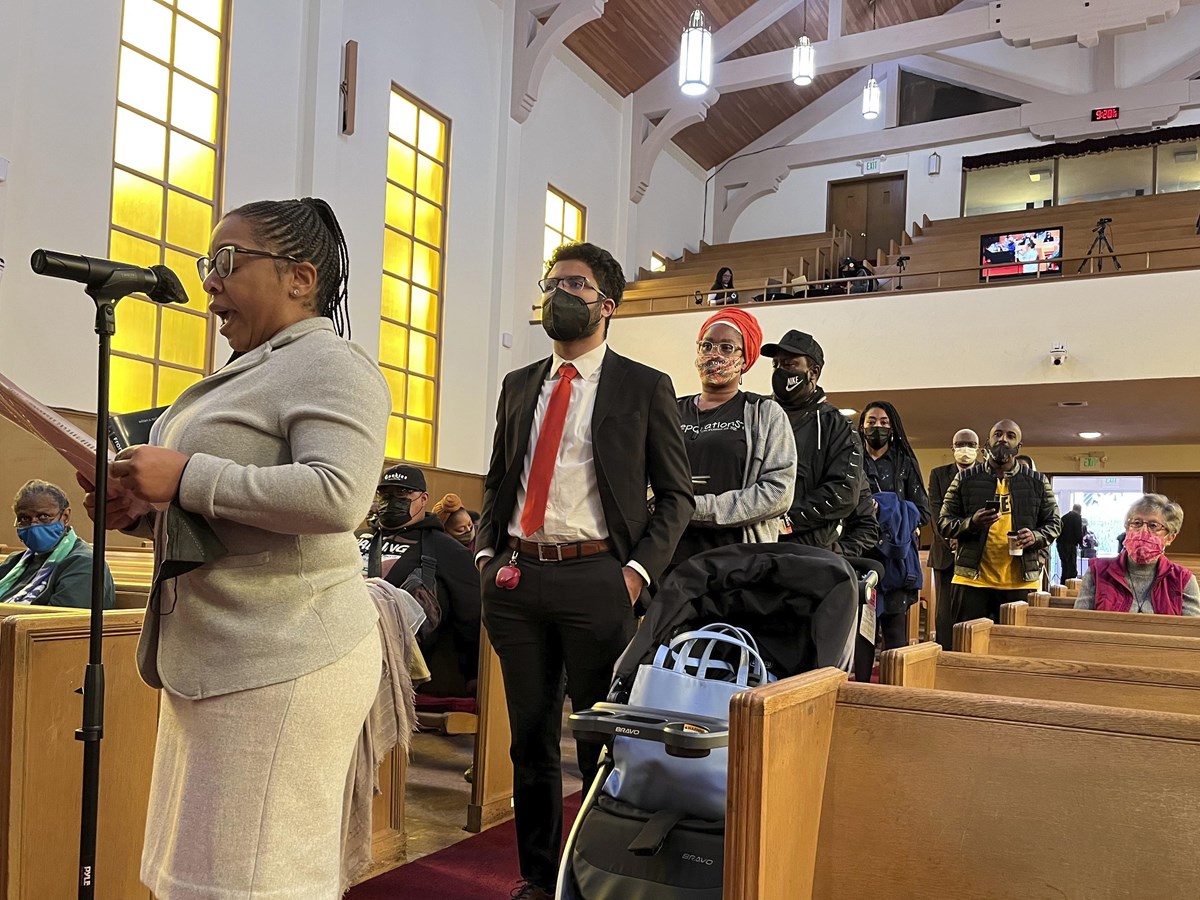 People line up to speak during a reparations task force meeting at Third Baptist Church in San Francisco on April 13, 2022.

California’s reparations task force will release today its first of two reports detailing the state’s history of slavery and racism and recommending ways the Legislature might begin a process of redress for Black Californians, including proposals to offer housing grants, free tuition and to raise the minimum wage.

The 500-page study describes decades of state and federal government actions that harmed Black Americans — from American slavery to the more recent redlining, mass incarceration, police actions and the widening wealth gap between Blacks and whites.

After police killed George Floyd and the subsequent nationwide protests, Gov. Gavin Newsom in 2020 signed legislation establishing the task force to study and develop a plan for reparations in the state. The law gave “special consideration” to Black Americans who are direct descendants to enslaved people.

The task force report proposes dozens of recommendations, including that the Legislature  “implement a comprehensive reparations scheme.” The final details —  including the exact monetary amount of compensation and the number of Black Californians eligible — will be in a second report due to the Legislature by July 2023.

The task force recommends establishing 10 new offices within state government to oversee administration of reparations, including an Office of African American/Freedmen Affairs to help people file claims for compensation and an Office of Freedmen Genealogy to help people prove their eligibility with genealogical research.

From slavery to the KKK

It’s unclear how many people would qualify for reparations. The task force estimates that, despite California’s anti-slavery constitution, about 1,500 enslaved Black people were living in the state in 1852.

After slavery was formally abolished, California became a breeding ground for the Ku Klux Klan. The report says in the 1920s the KKK hosted more events in California than it did in Louisiana or Mississippi. In Los Angeles, the police department teemed with KKK members. In Kern County, klansmen routinely beat and kidnapped Black and Latino residents.

“Black economic growth and prosperity have been critically hindered by racist policies aimed at suppressing African Americans even after end of slavery.”

The report also referenced numerous instances of segregation and restrictive housing covenants across the state. And it described the wholesale destruction of several Black neighborhoods and cities.

In the 1950s, for instance, the city of San Francisco razed Fillmore, a Black business district, destroying 883 businesses and displacing about 20,000 people from nearly 5,000 homes.

Their recommendations aim to not only address specific instances of violence or prior harm, but also to support future generations of Black Californians.

The proposed Office of Freedmen Education and Social Services would offer free tuition for Black students in private K-12 education and those pursuing higher education in the state. It would also ensure that school curricula reflect a more “expansive discussion of the experiences of Black Americans in a way that is accurate and honest,” the report said.

The task force also proposed raising the minimum wage, requiring health benefits and paid time off, and other workplace protections for workers in agriculture, hospitality, food and domestic industries where there were large numbers of Black workers but fewer worker protections, the report said.

Black Californians seeking reparations would be able to file a claim through the Reparations Tribunal/ Redress Administration, the proposed arm of the reparations process that would accept or deny a request.

“Without a remedy specifically targeted to heal the injuries that colonial and American governments have inflicted on 16 generations of Black Americans and dismantle the foundations of these systems,” the report reads, “the ‘badges and incidents of slavery’ will continue to harm Black Americans in almost all aspects of American life.”

Kamilah Moore, chairperson of the task force, said its report is the first government publication providing remedies to institutional racism against Black people since the 1968 Kerner Commission, a federal study requested by President Lyndon Johnson.

“This report is extremely timely and urgent. I hope that people use this not only as an educational tool, but as an organizing tool,” Moore said.

“It is not only useful for people living in California, but for community members, constituents and organizers throughout the United States … to champion the causes of the African American community wherever they are.”

In March the task force voted that African Americans who are direct descendants of enslaved or freed Black people living in the US before the end of the 19th century would be eligible for reparations.

The task force is the only statewide initiative examining reparations. Cities such as Asheville, North Carolina and Evanston, Illinois have initiated reparations schemes at the local level, but at the federal level, HR 40, a bill that would commission a study on reparations, remains stalled in Congress.

Assemblymember Reggie Jones-Sawyer, a Democrat representing Compton, is pushing to extend the life of the task force by another year. Under Assembly Bill 2296, which passed the Assembly, the task force would continue its study through July 2024.

“Black economic growth and prosperity have been critically hindered by racist policies aimed at suppressing African Americans even after end of slavery,” he said in a statement.

“I believe that … State Legislators will be receptive of the report’s analysis, but remain true to their obligation of questioning approach, costs, and implementation. The Reparations Task Force should remain empaneled for another year to help guide, advise, and review any issues or questions that may arise … The need to have the Task Force available to furnish its experts to help with matters once the Legislature determines what, if anything, comes from these studies will be crucial to the success of this monumental step towards healing.”

Over the summer, partner organizations such as the California Black Power Network and the Black Equity Collective will host public listening sessions about the report findings. The task force will reconvene its hearings in Los Angeles in September.