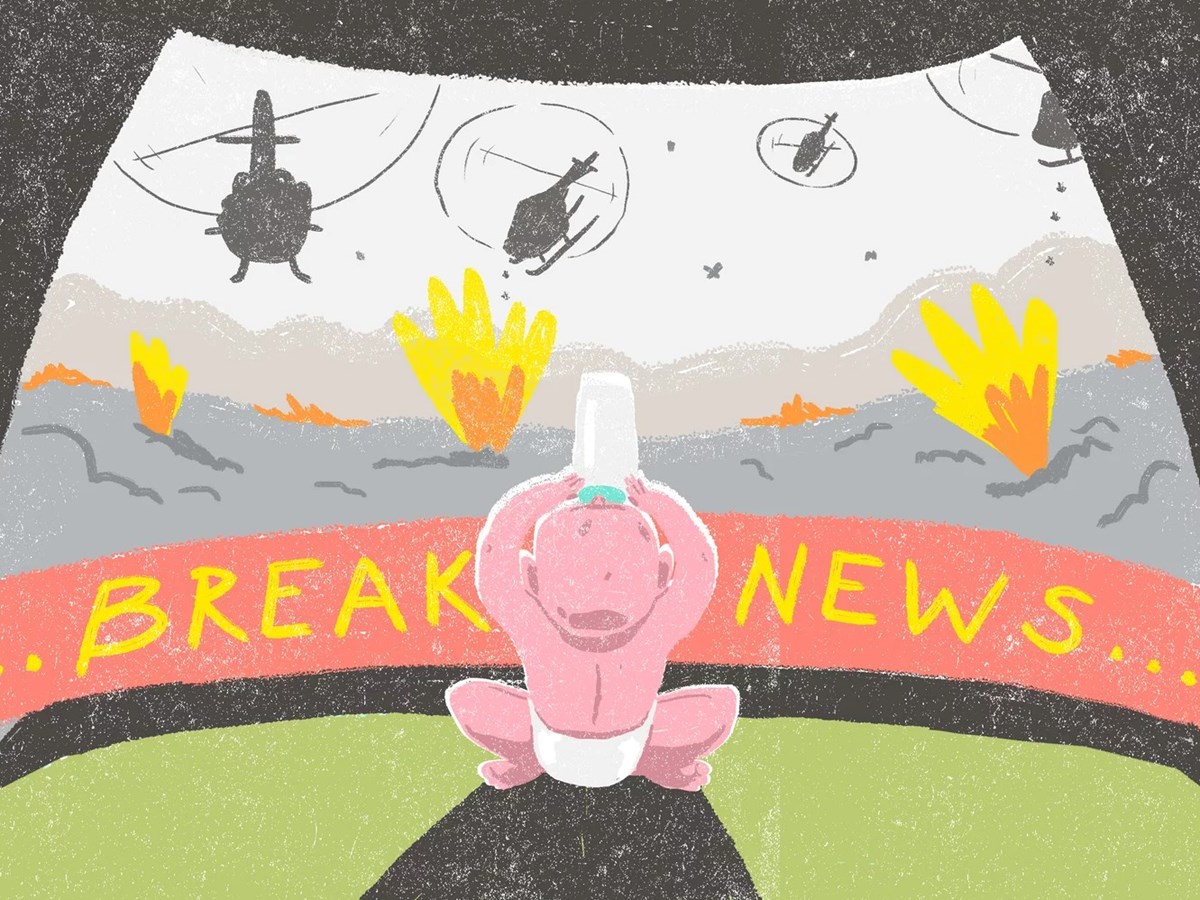 The news can be devastating: Communities are reeling after a mass shooting killed 21 people — including 19 children — at an elementary school in Uvalde, Texas. That's after a shooter, motivated by a racist conspiracy theory, shot and killed 10 people at a grocery store in Buffalo, N.Y., and another shooter in Dallas injured three women of Asian descent in what the police chief called "a hate crime."

These events can be incomprehensible for adults — so how do we talk about them with kids?

We spoke with a handful of child development experts about what parents, teachers and other caregivers can say to help kids process all the scary news out there. Here's what they had to say:

Truglio says that for starters, try not to let your children experience the news without you. That includes letting TV or audio play in the background. In 2017, 42 percent of parents of young children told Common Sense Media that the TV is on "always" or "most" of the time.

As a little girl growing up in rural Louisiana, Alison Aucoin remembers her father watching the evening news during the Vietnam War. "The way that our house was set up, it was kind of impossible for me to completely miss it."

Aucoin vividly recalls the rapid fire of rifles and the shouting of soldiers, but it was two words that the reporters and anchors kept using that truly frightened her.

"[I] heard the words 'guerrilla warfare' and ... thought, gorillas — like apes," Aucoin says. "And I literally had a plan for where I would hide in my closet when the gorillas came."

Truglio says that because we can't control the news itself, adults need to control the technology that exposes kids to potentially traumatic news.

For big stories, ask: "What have you heard and how are you feeling?"

While it's important to limit your kids' exposure to potentially frightening media, some stories are simply too big to avoid. And as kids get older, if they don't hear about it at home, they'll almost certainly hear something from classmates at school.

Tara Conley, a media researcher at Montclair State University, says adults should choose a quiet moment to check in with their kids, maybe at the dinner table or at bedtime.

The idea, she says, is to allow kids to "ask questions about what they're seeing, how they're feeling and what do they think." In other words: Give kids a safe space to reflect and share.

Give kids facts and context

Check-ins also allow you to debunk memes, myths and misconceptions, and that's important in the social media maelstrom, says Holly Korbey, author of Building Better Citizens, a new book on civics education. Once, in the days after some international news broke, she says, "My own teenagers were showing me these memes and rumors on Instagram spreading about boys being drafted for World War III, no kidding."

Korbey says, "One of the most important things parents can do in this scary climate is to talk to kids about facts. For example: 'No, there is not a draft, and no we haven't started World War III.' "

When they ask why something happened, avoid labels like "bad guys"

Evan Nierman, a father of two, lives in Parkland, Fla. His son turned 11 the day after the 2018 shooting at Marjory Stoneman Douglas High School, and his daughter was 8. He says one of the toughest moments for him as a father was when his kids asked why the shooting happened. "And there's obviously not a great answer for that. It's hard to explain."

Truglio says we should resist the temptation to label anyone "bad guys" or "evil." It's not helpful, and it may increase fear and confusion. Instead, she says, talk about people being in pain, being angry and making bad choices. That's what Nierman and his wife settled on, telling their children that the shooter wasn't well and needed help.

And according to Truglio, there's one important thing parents shouldn't be afraid to say: I don't know.

"Sometimes we don't have the answers to all of these whys," she explains. "It's important for parents to say ... 'I don't know why it happened.'"

Encourage kids to process the story through play and art

Children often try to make sense of what they see and hear through art and creative play. Sometimes it can be disturbing for adults to see children reenact or draw something scary or violent, but this kind of play serves an important purpose.

Conley says, "Play is part of reconstructing [children's] own stories." She calls it "meaning-making" and says adults do it too — by discussing stories with friends or even sharing memes on social media. "It also helps us make sense of the world around us...when we're being bombarded with information," she explains, "and it helps us discern credible information."

Fred Rogers, the beloved children's TV host, famously passed on this advice from his mother: "When something scary is happening, look for the helpers. You will always find people who are helping."

Truglio did this when she talked to her then-young son about the 2012 Sandy Hook school shooting. The shooting happened on a Friday, and she kept him away from the television all weekend.

"We didn't turn on the TV until President Obama spoke and there was a memorial service," Truglio says. "We focused on the positive — how people were gathering and taking care of each other."

There's evidence that talking about helpers really does make a difference in how kids see their world. After the Columbine school shooting in 1999, Sesame Workshop studied school-age children's perceptions of the world through their drawings. The images were full of violence, Truglio says: "guns and knives and dead people."

But after the Sept. 11 attacks, just two years later, media coverage changed, she says, focusing more on themes like "the country is strong. The country's coming together. We are united. We are going to get through this." And this made a difference for kids: Their drawings featured American flags and heroes like police officers or firefighters.

Alison Aucoin, who shared her memories and fears of the Vietnam War, is white; her daughter, Edelawit, was adopted from Ethiopia. Edelawit was just 7 years old when Michael Brown, a black teenager, was shot and killed while unarmed by a white police officer in Ferguson, Mo., in 2014.

"I was scared that something like this would happen to me," Edelawit, now 12, says, and ever since, whenever a similar, police-related shooting happens, she and her mother follow a few steps. First, her mother shares the news.

"I always have time to process it," Edelawit says. "And then she says what I can do to protect myself. And then we go and protest."

"In talking with our children," Conley says, "we also have to show them how we're helping too, and asking them, 'How do you see yourself as a helper in these situations?'"

You might consider bringing your child to a peaceful rally or protest, collecting donations together or writing to an elected official. A sense of agency can dramatically reduce a child's anxiety.