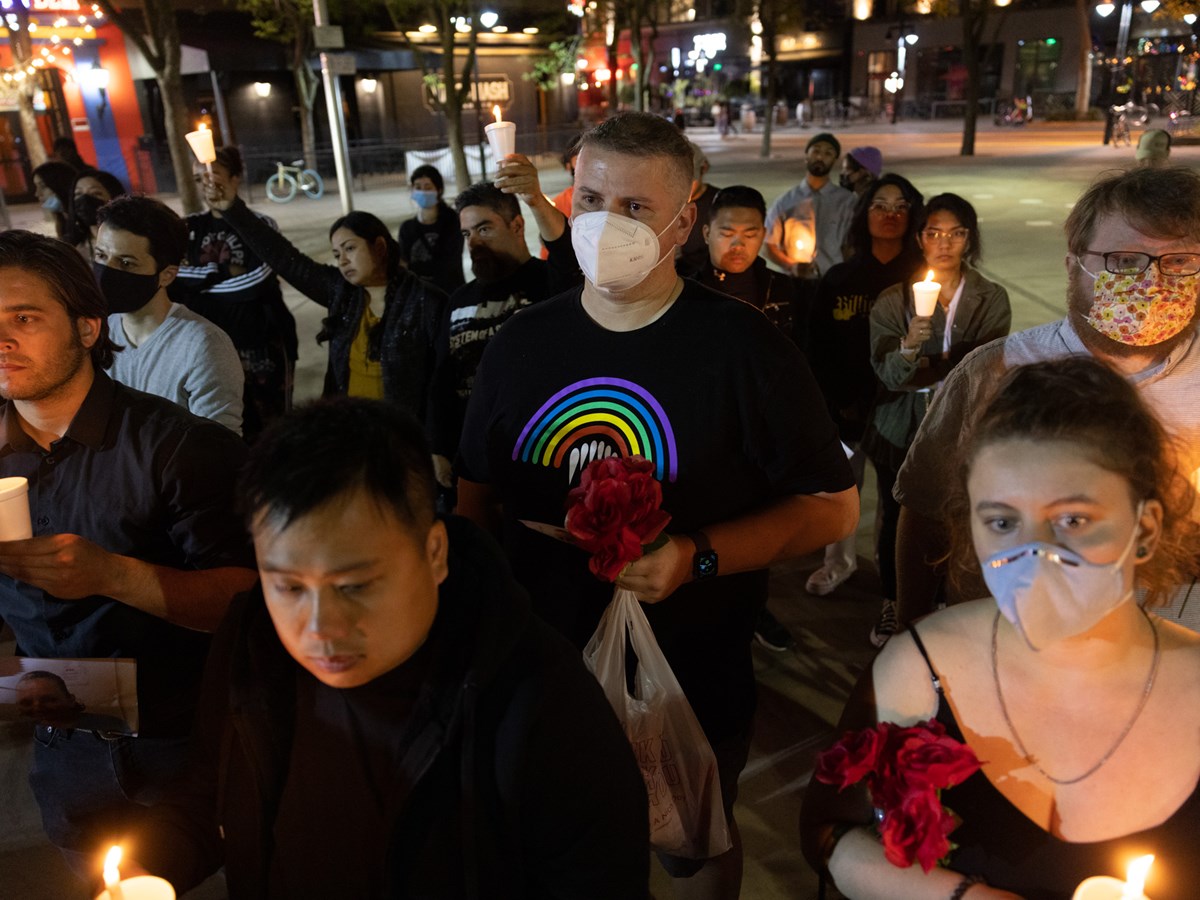 A day after the largest mass shooting in Sacramento history, community members gathered at the corner of K and 10th streets to honor the six people who were killed and the 12 who were injured. It was one of at least two vigils Monday evening — the other put on by Mayor Darrell Steinberg’s office across the street from the Golden 1 Center.

On the corner where the shooting took place, Jerome Chapel, a member of the Black Child Legacy Campaign’s trauma response team, passed out candles and led those standing by in a prayer. About a dozen people lit candles for Sergio Harris, the 38-year-old man who was killed during the shooting. 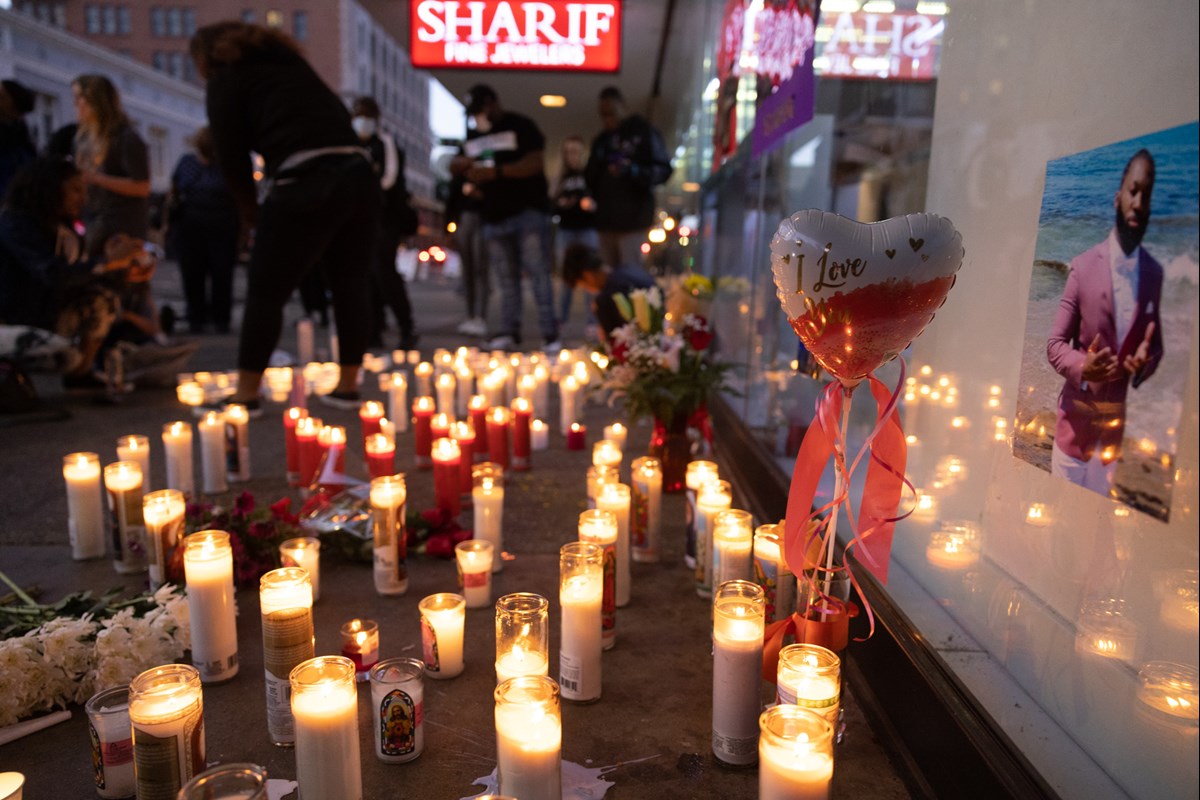 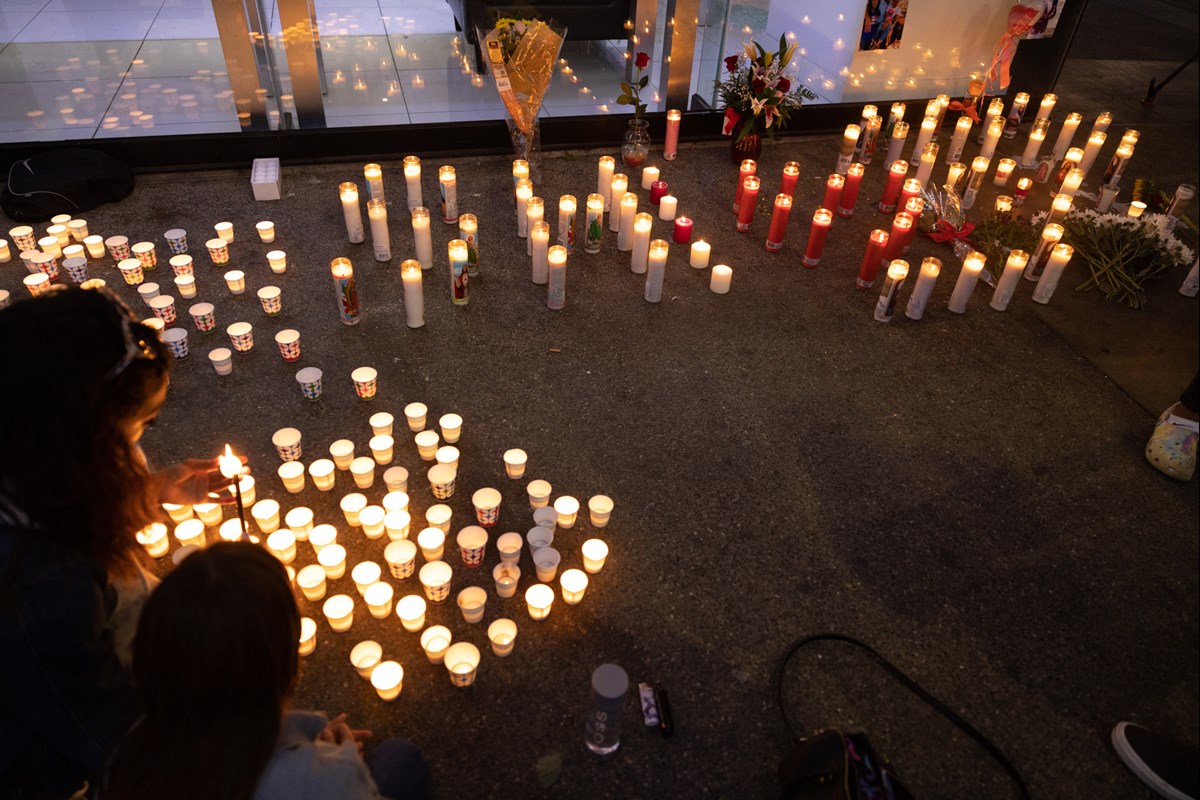 Chapel said that his organization is working to help family members who are struggling to navigate the aftermath.

“We’re here to help comfort the family any way that we can, whatever it’s going to take,” he said. “A lot of times, families don’t have the resources to make final arrangements for their loved ones – we can help them navigate through the system and find a way to do that.”

A few blocks away, dozens of people — mostly news media, city officials and city staffers, along with some community members — gathered for a separate vigil.

“The national spotlight is on us, for the moment,” Steinberg said in front of news cameras and mourners. “So if we can lift our voices as we have over these last couple of days to decry the senseless violence and the sickness that exists in our country around the proliferation of assault weapons… that indiscriminately kill and injure, we will lift our voices to do so.”

Steinberg added that addressing mental health should be “a top tier public health priority in this country.” 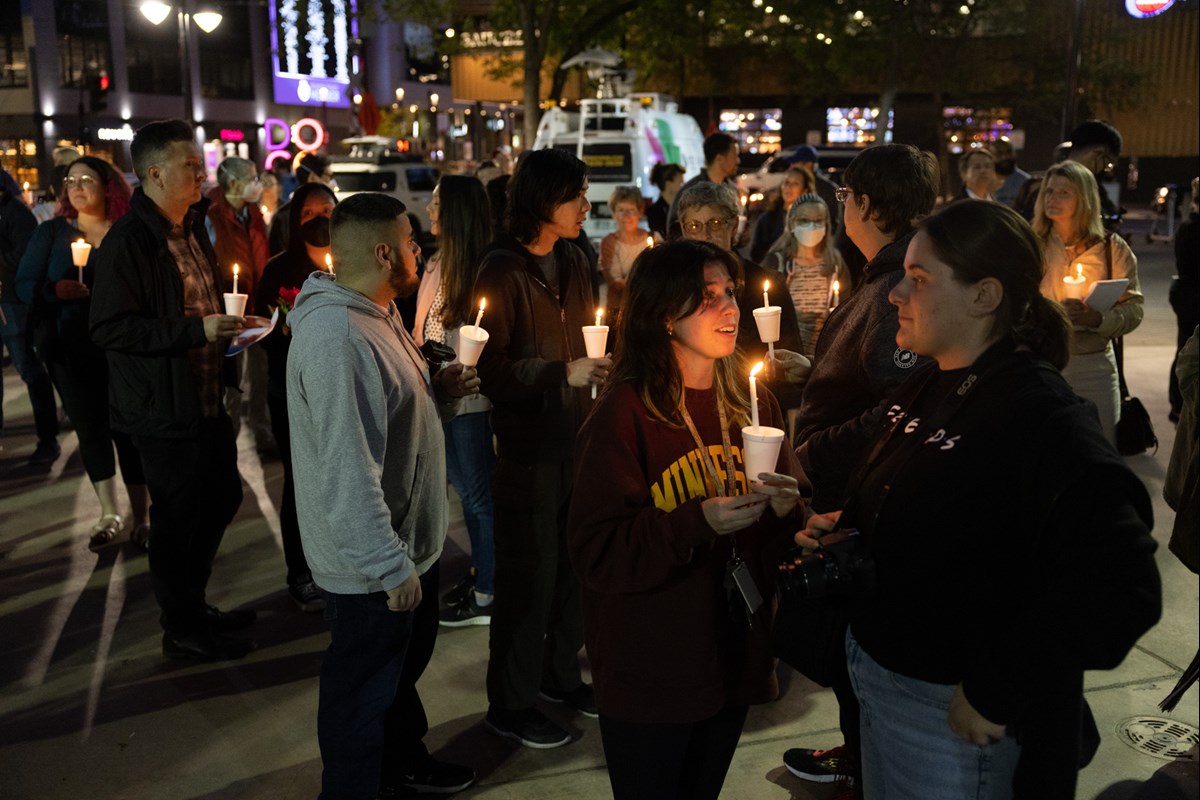 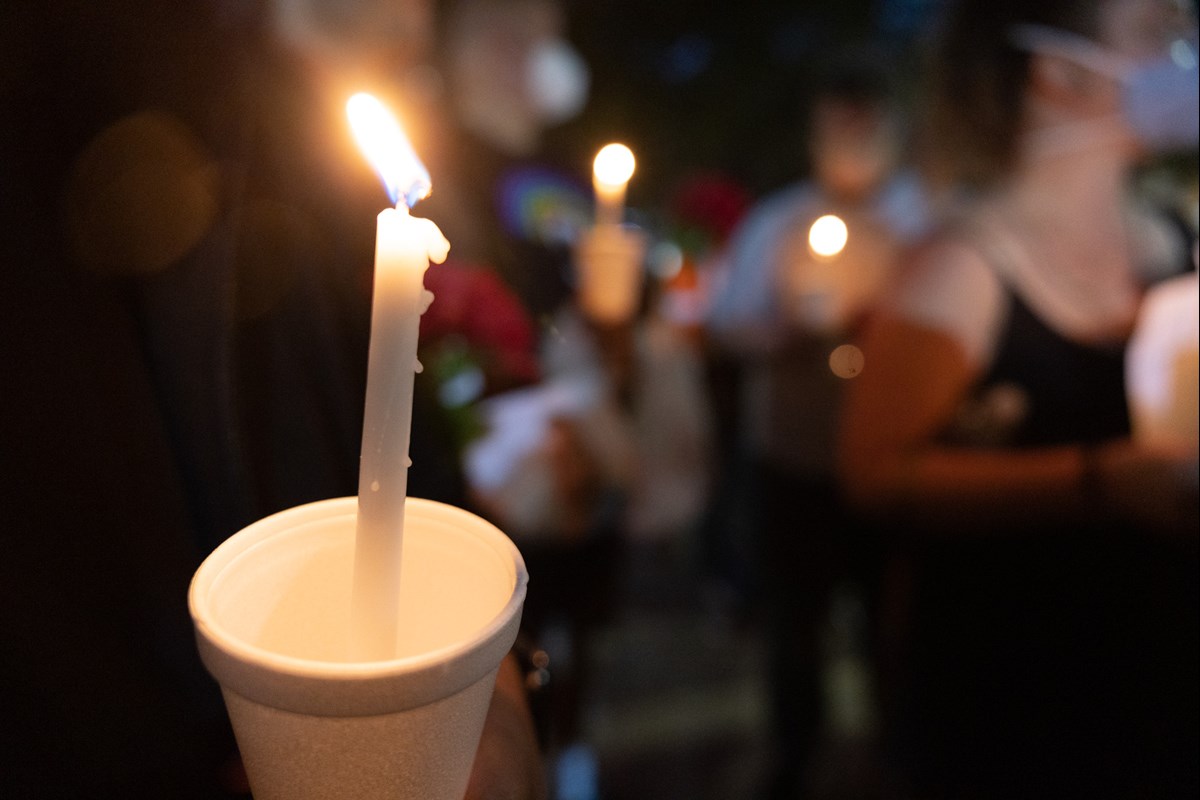 Jackie Henderson, who said he was Harris’ cousin, said during the vigil that promises of action that city and community leaders make after each shooting are not enough.

“My cousin, Sergio, was gunned down right down the street,” he said. “The last time we had a mass shooting, you did the same thing, sat out here, held up our candles… How are you here for us if we’re sitting here doing the same damn thing again?”

He also demanded action from community members in attendance and that the shooters are held accountable.

Kristin Lopez was one of many in the crowd holding a photo of Melinda Davis, a 57-year-old unhoused woman who was also killed in the shooting. Lopez said that while she didn’t know Davis, she wanted to show support.

“It’s sad for all the victims, it’s completely tragic,” Lopez said. “But the fact that the homeless don’t have a voice — they’re constantly overlooked, every day we walk over them.” 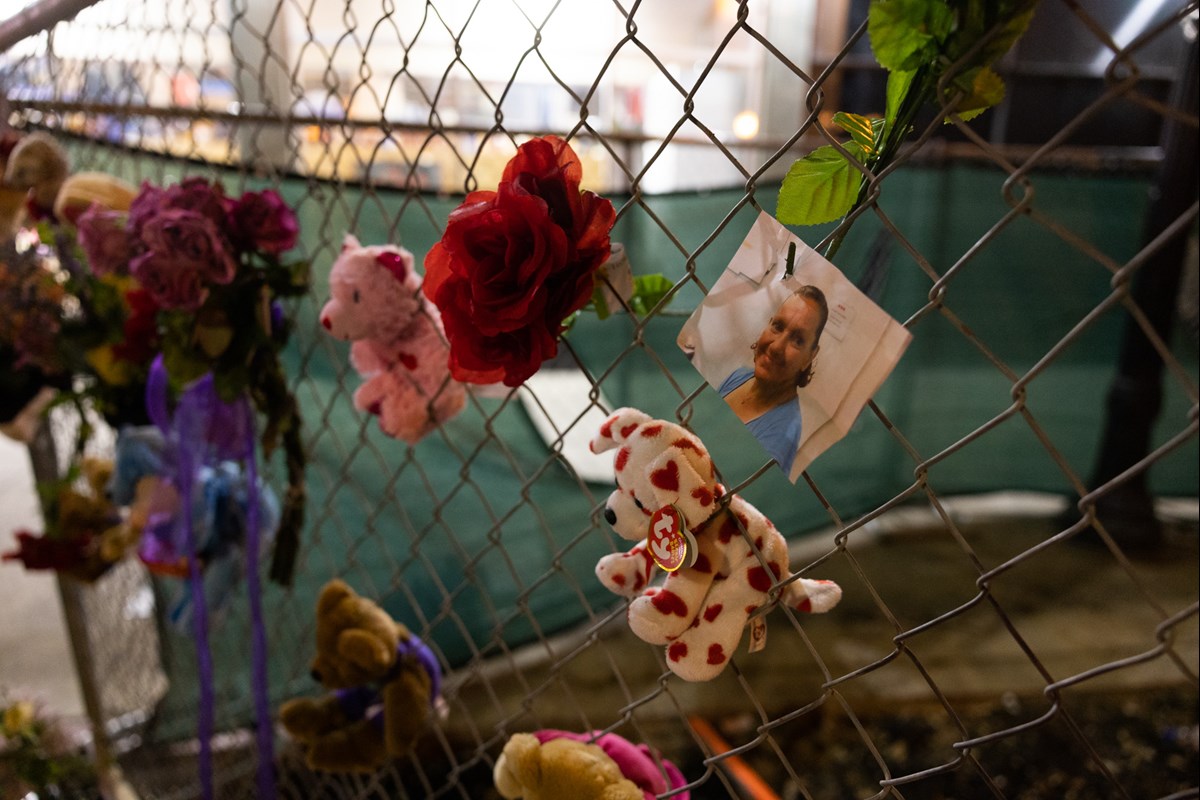 A photo of Melinda Davis, a woman shot Sunday night in Downtown Sacramento, is affixed to a fence at 10th and J street on Monday, April 4, 2022.Andrew Nixon / CapRadio

Throughout the vigil, community members walking by listened to those talking at the vigil to pay their respects. One attendee, who identified only as Mark, said that after losing a friend a couple years back, he wanted to show solidarity with them.

“I’m sorry for people who lost their family members,” he said. “The pain never goes away, and we can only just live day to day.”