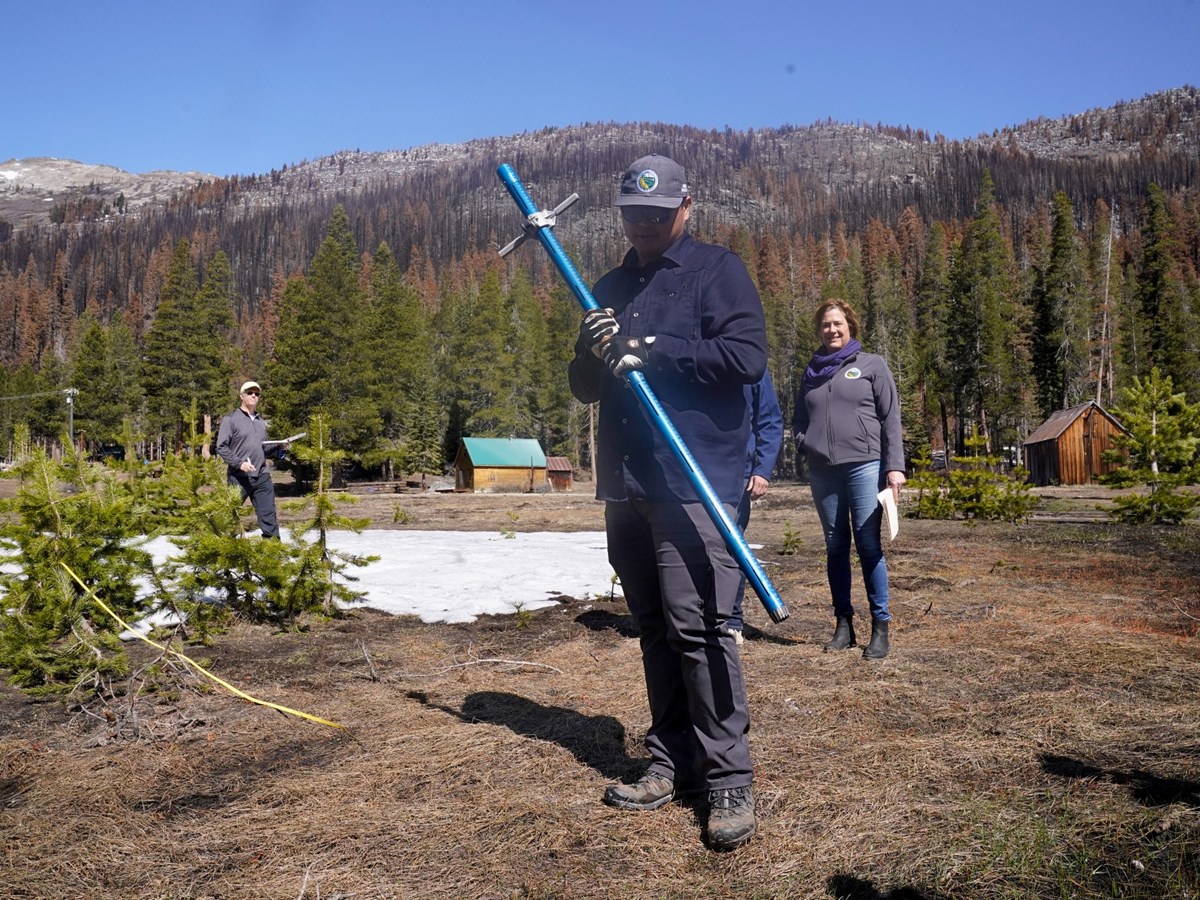 Sean de Guzman with the California Department of Water Resources looks at ground where there would normally be snow to measure as he conducts a snow survey at Phillips Station near Echo Summit, Calif., on Friday, April 1, 2022.

State water managers today reported on the health of the Sierra snowpack and the results were grim. From a barren field at Phillips Station near Lake Tahoe, they announced the depth of the snow at just 4% of the average at this time of year. Statewide, that level is 38%.

Snowpack makes up a third of California’s water supply. After April 1, when it’s usually at its peak, snow begins to melt and trickles down into resources like reservoirs, rivers and groundwater.

But snowpack peaked much earlier in the Sierra Nevada this year. Sean de Guzman is manager of the Snow Surveys Program for the California Department of Water Resources. He said, while record snowfall in December helped boost the numbers, the peak came in mid-January and then the following dry months cut that progress.

“The small amounts of snowfall that have happened since then haven’t been enough to outpace the amount of snowmelt,” de Guzman said.

Last year was the second-driest on record. By October, Gov. Gavin Newsom declared a statewide drought emergency and recommended voluntary cutbacks of water use.

After that declaration, Californians experienced a whiplash of weather events. December brought an atmospheric river and record-breaking snowfall. But from January through March of 2022, the state saw little to no precipitation.

Climate scientists say that weather events that swing from one extreme to another are evidence of climate change. As they worsen, experts say that Californians should expect more of that whiplash in the coming years.

“Climate change is here and it's changing our state,” said Wade Crowfoot, California’s Secretary of Natural Resources. “The question is, what are we going to do about it? We are not bystanders to the topic.”

Karla Nemeth is director of California’s Department of Water Resources. She said that this year’s conditions are “evocative” of 2015, when the last extreme drought conditions were observed. That year, state officials found no snow at all at the Phillips Station.

Nemeth added that dry conditions may mean farmers will have to limit how much they plant this year. Unlike in past drought years, she said, farmers and water districts will need to come up with sustainable ways to manage groundwater supplies.

"There are many agricultural users, particularly in the Central Valley, that will get nothing from their water contracts,” she said. “We do anticipate that we will see much more significant land fallowing this year in California than we did last year."

Nemeth said that these conditions are also a reminder of the importance of conservation.

“All of this is information that California needs to absorb and adjust in terms of how we manage our water resources into the future,” said Nemeth. “So we are calling on all Californians to use water wisely, to conserve as much as you can, particularly in the event of a third dry year.”

James Reddick contributed to this reporting.