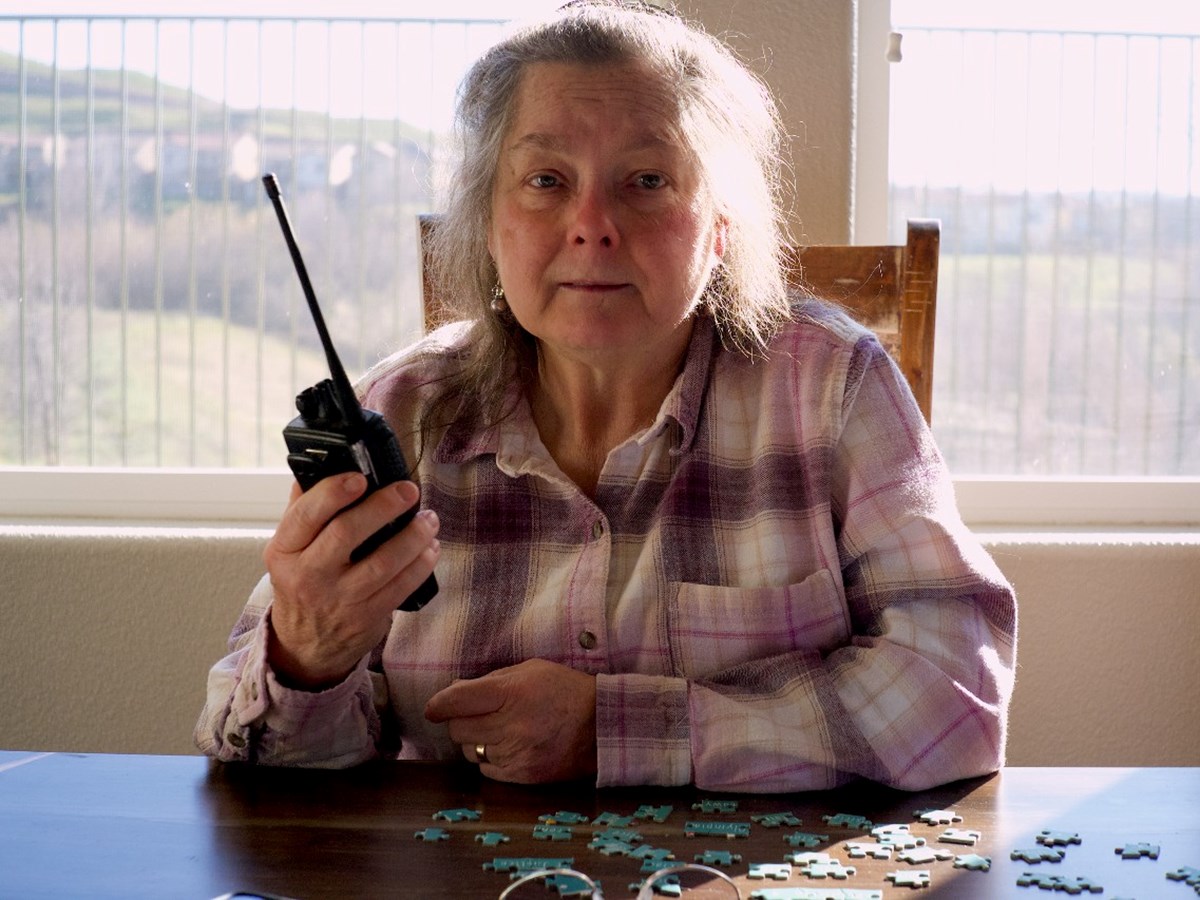 Eileen Strangfeld, 69, is a member of the Neighborhood Radio Watch in El Dorado County. She lost her Grizzly Flats home in the 2021 Caldor Fire, but said the radio network provided timely updates and allowed her to evacuate safely.

Eileen Strangfeld doesn’t really like puzzles, but she’s getting used to putting the pieces back together these days.

The 69-year-old writer is living in a rental home in El Dorado Hills, after her Grizzly Flats home burned to the ground in last year’s Caldor Fire.

“When I turn the radio on on Wednesday nights, they go through this whole check-in process,” she said, scanning the portrait of inspirational women broken into 1,000 pieces. “It sometimes can go on for about a half-hour, so I can sit here and do the puzzle while I'm listening.”

She isn’t talking about listening to a standard FM radio. Strangfeld is part of the Neighborhood Radio Watch group in El Dorado County, a network of amateur radio users who activate during emergencies. She’s one of about 350 members, and their ranks are growing after hundreds of homes burned in the Caldor Fire last year. Strangfeld said the network gave her timely updates on the fire’s rapid advance, allowing her to safely evacuate and notify neighbors.

In the face of worsening climate change, California is investing billions of dollars in high-tech solutions to predict and respond to natural disasters. Meanwhile, communities throughout the state — facing fires, floods and winter storms — are increasingly embracing the century-old technology of two-way radios as a failsafe. In rural areas, where disasters can easily knock out power and cell coverage, these networks are becoming an essential piece of the communications ecosystem.

“We know that if everything else fails, that our radio is going to work — it's going to help keep us safer,” said Alan Thompson, a licensed amateur radio operator who helped start the El Dorado County Neighborhood Radio Watch.

Thompson came up with the idea for a community radio group after the 2018 Camp Fire killed more than 80 people and leveled the town of Paradise.

“People were stranded,” Thompson said. “They had no communications and the evacuation was chaotic, to say the least.”

More than one-third of Paradise residents who signed up for evacuation notifications never received one, according to the Los Angeles Times. Their reporting found that the notification success rate dropped as the fire advanced, knocking out cell towers.

In 2019, Thompson gave a presentation to the Placerville Fire Safe Council, outlining what the Neighborhood Radio Watch would look like. Representatives from Cal Fire and law enforcement were also present.

And they were skeptical.

“The general opinion … among law enforcement and first responders was that we would create havoc in an emergency,” said Bob Hess, who helped co-found the community radio group. 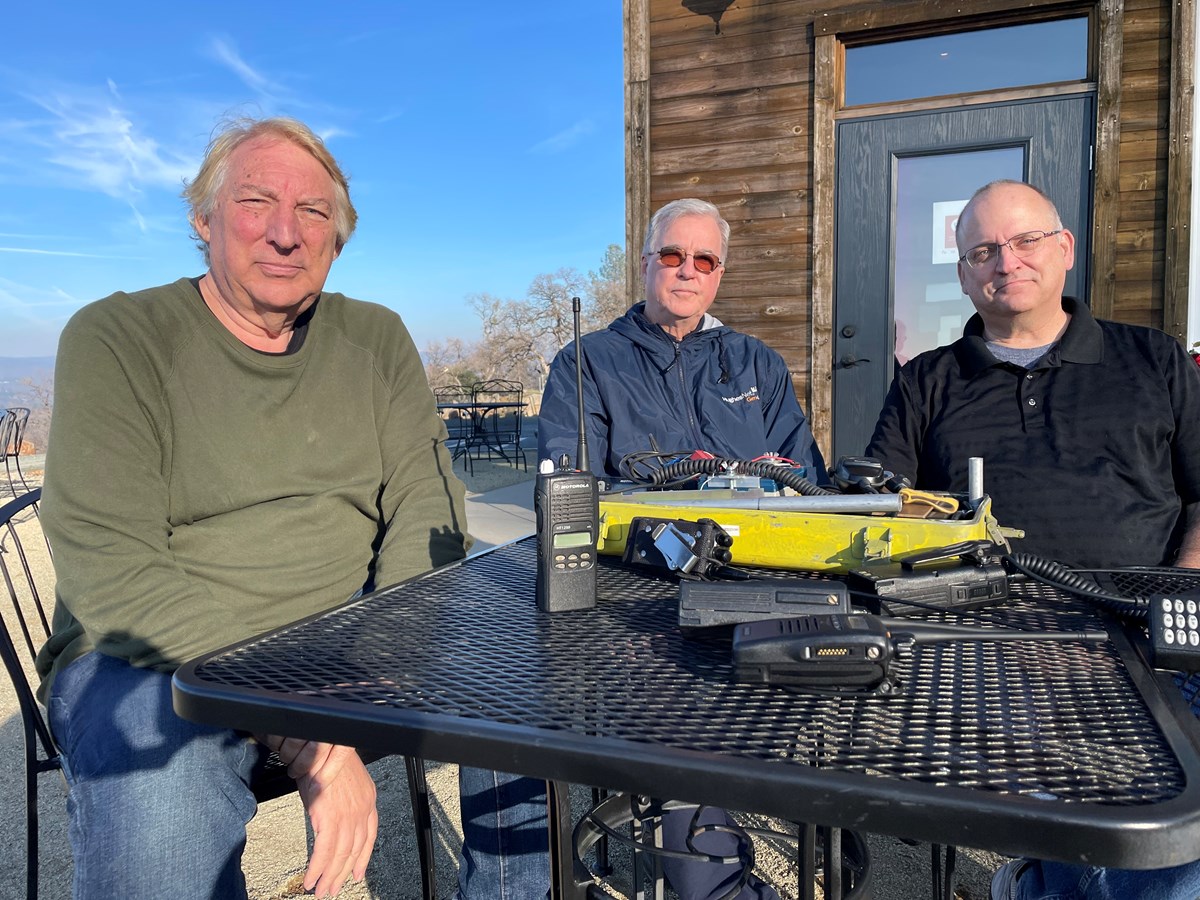 Bob Hess, Alan Thompson and Mike Sumersille — members of the Neighborhood Radio Watch in El Dorado County — sit on a hilltop where the group maintains one of its repeater antennas.Scott Rodd / CapRadio

He offered reassurances to get them onboard. The group would only relay official emergency notifications, not their own. Users who sent out alerts would need special training. And they would stay clear of radio frequencies used by police and firefighters.

Now, the group has several former first responders on its board.

Hess and Thompson are both amateur — or “ham” — radio operators, which requires technical understanding and more extensive licensing. The world of ham operators is small. The goal of the Neighborhood Radio Watch is to put user-friendly radios into the hands of everyday people — “radio for the rest of us,” as Thompson describes it.

Their group buys large lots of used radios on eBay — usually retired from police or fire departments — and refurbishes them. Average users need to purchase a license from the Federal Communications Commission, and the group offers training to members.

There are similar networks throughout California and across the country, with more popping up every year.

“The pattern that we see is always in response to large scale disasters or catastrophes,” said Joe Ames, national chairman of Radio Relay International, a nonprofit that works with local radio clubs.

In New England, interest may spike after a major snowstorm; in Gulf states, after a hurricane; in the Midwest, after a tornado.

In many areas, there’s more than one threat. The El Dorado County Neighborhood Radio Watch responded to a walloping winter storm during the holidays, helping stranded residents get food and firewood. The storm knocked out power and cell service for more than 10 days in some areas.

Going Back Up The Mountain

There’s a 20-foot metal pole behind Strangeld’s El Dorado Hills rental home. It didn’t come standard with the property. It’s an improvised antenna that just barely catches a signal from the radio users in Coloma, on the other side of the hill. The rest of the county is out of reach.

Their Wednesday night check-in is one of the few, tenuous connections Strangfeld still has with her pre-fire life and community.

Most of her belongings, and the memories attached to them, are gone. Her telescope and cameras. The model train collection. Her daughters’ christening outfits.

Much was left behind. Much turned to ash.

She credits the radio network with giving her enough time to save some irreplaceable belongings, including reminders of her late husband, Ken.

“He never bought me jewelry, he made it all,” she said. “Since he was gone, there was no way I would ever be able to replace my jewelry.”

After some hesitation, Strangfeld has decided to rebuild on top of the mountain in Grizzly Flats. In contrast to the scratchy radio signal she gets in her rental home, the elevation will allow her to pick up everyone in the Neighborhood Radio Watch.

Strangfeld has been through highs and, mostly, lows over the last six months. Going back up to Grizzly Flats is one thing that gets her excited.

She beamed describing the plans for her new home, with its wraparound porch.

“My contractor told me the view isn't going to be of trees for a while,” Strangfeld said. “But he says, you know, being up there at the top, you're going to have the most beautiful view of the entire valley.”