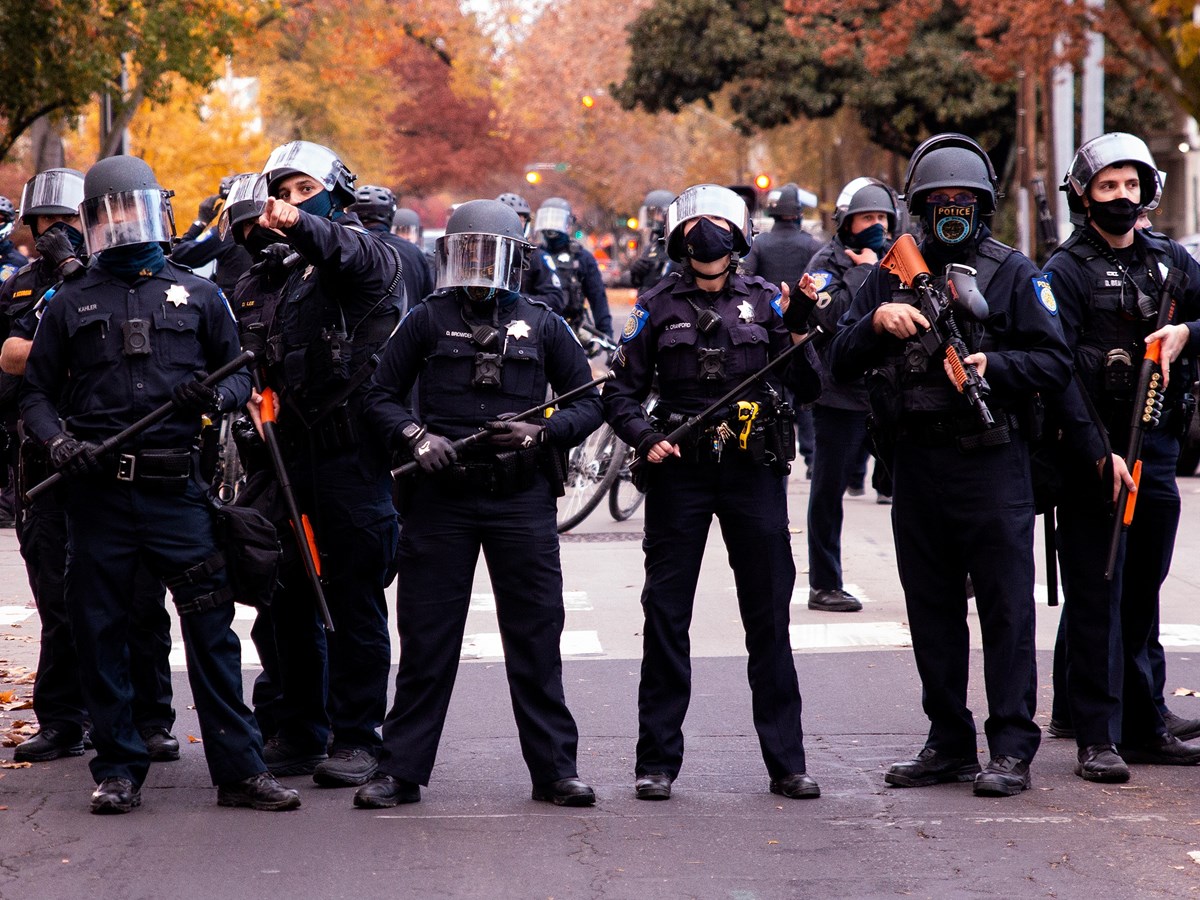 Sacramento Police officers form a line, blocking anitfa counter-protesters from reaching the Trump supporters they briefly had a confrontation with in downtown Sacramento on Dec. 12, 2020.

Nicollette Jones has been organizing and attending demonstrations in Sacramento since 2011. Last summer was the first time she felt it was necessary to wear goggles and a helmet, occasionally adding a bulletproof vest.

“The way Sac PD police the protests cause my city to feel like a war zone,” she said during a press conference this month.

Jones is one of six people suing the city of Sacramento, its police department and former chief Daniel Hahn in a civil rights action with the stated goal to “vindicate the rights of Californians protesting against racism, white supremacy and police violence in Sacramento.”

The suit alleges that the department’s policies and practices have violated the rights of the plaintiffs and other Sacramento protesters, “chilling” their right to assemble and protest while using excessive force.

The suit also claims the city handles pro-Trump protests, such as the “Stop the Steal” rallies after the 2020 election, differently than racial justice protests the city experiences after the police killing of George Floyd.

The Lawyers’ Committee for Civil Rights of the San Francisco Bay Area, Civil Rights Education and Enforcement Center and Wilson, Sonsini, Goodrich & Rosati filed the suit on behalf of the plaintiffs.

“This is a case about the city of Sacramento and its police department’s systematic and impressive efforts to repress the speech of everyday people who use their voices to fight for racial justice, against white supremacy and to end police brutality against Black people,” civil rights attorney Tifanei Ressl-Moyer said.

Tim Swanson, spokesperson for the city of Sacramento, confirmed that the city received the complaint and “is in the process of reviewing it and determining the appropriate next steps.”


Ressl-Moyer said the suit has developed over a year, with the Lawyers’ Committee’s legal team working with community members and grassroots organizations to understand policing’s impact on individuals and the broader Sacramento community.

“The Sacramento Police Department has developed a reputation over many years — it has used excessive force, surveillance, harassment and arrest to send a message,” she said. “That message is, ‘You are not welcome to express your opposition to our police power, and especially not in the name of racial justice or Black liberation.’”

The lawsuit alleges the police witnessed, without intervening, white supremacists and protesters at weekly demonstrations harass and assault community members. Conversely, the suit argues counter-protesters who were associated with “racial justice, anti-police brutality sentiments” were “targeted … with extreme force and intimidation to stop their First Amendment activity.”

It asks for compensation for the plaintiffs but does not name a specific amount. Sam Lew, senior communications manager for Lawyer’s Committee for Civil Rights, said that amount could be decided as the legal process develops.

The suit is also about the city and department making an effort to better understand what makes people in Sacramento feel safe, Pilar Gonzales Morales said at the press conference on Jan. 4. She is part of the Civil Rights Education and Enforcement Center, one of the groups filing the suit.

The plaintiffs’ interests, she said, lay in seeing a city and community with non-discriminatory policing, “where people that are protesting and gathering for racial justice causes can feel safe in partaking in their First Amendment claims instead of constantly being threatened and afraid.”

The suit also alleges that the city and police violated the Fourteenth Amendment and its promise of equal protection, as demonstrated by its response to weekly protests beginning after the 2020 election.

Ressl-Moyer points to a recent report from the Center of Policing Equity as evidence of the police department’s race-based policing, which she called unconstitutional.

The 2021 report found that while the department’s use of force decreased from 2014 to 2019, officers were 4.5 times more likely to commit acts of force against Black people.

The lawsuit also cites a report published by the city’s Office of Public Safety and Accountability, which evaluated the department’s response to the March 4, 2019, Stephon Clark protests, during which 84 people were arrested on just one day in East Sacramento.

The report’s recommendations called for the department to review its current model of policing protests, including whether its tactics for policing protests were balancing “the demands of public safety with the desirability of facilitating peaceful protests.”

Those issues being left unaddressed led to the disparate police responses to protests in 2020, the suit states.


For weeks after the 2020 presidential election, the state Capitol saw a series of “Stop the Steal” protests, led by Donald Trump supporters who falsely claimed that the election results were invalid. Counter-protests resulted, where white supremacist groups clashed with demonstrators mostly in all-black clothing without significant police intervention.

Loren Kidd, another protester named in the lawsuit, said the police’s response to the Stop the Steal demonstrators was different than how it handled protests following George Floyd’s death earlier in 2020.

Kidd said he saw “police officers look the other way when white supremacists, such as the Proud Boys, would physically assault and use chemical weapons on anti-racist and anti-police brutality demonstrators, including myself.”

Kidd, who has epilepsy, also alleges that the police department violated the Americans with Disabilities Act in failing to accommodate his disability.

Meg White, who is also part of the lawsuit, said her experience as a Black woman in Sacramento was that “law enforcement does not keep me or my community safe and does not prevent violence.”

She said she was pepper-sprayed by police when she was helping someone being attacked by a Stop the Steal protester.

“To be attacked by the people who you pay to keep you safe, who your tax dollars go to fund, I can’t begin to explain the effects these experiences have had on my life,” she said.

Former police chief Hahn said last January that the department spent more than 7,000 hours of overtime and almost a third of its department monitoring the weekly Stop the Steal rallies. Hahn said at the time that his department had been consistent in its response to protests “regardless of the protesters’ beliefs.”

Ressl-Moyer filed a suit in early December 2021, alleging that the city of Sacramento was withholding public records about police response to protests.

The suit asks for a judge to order the city to release all requested records.