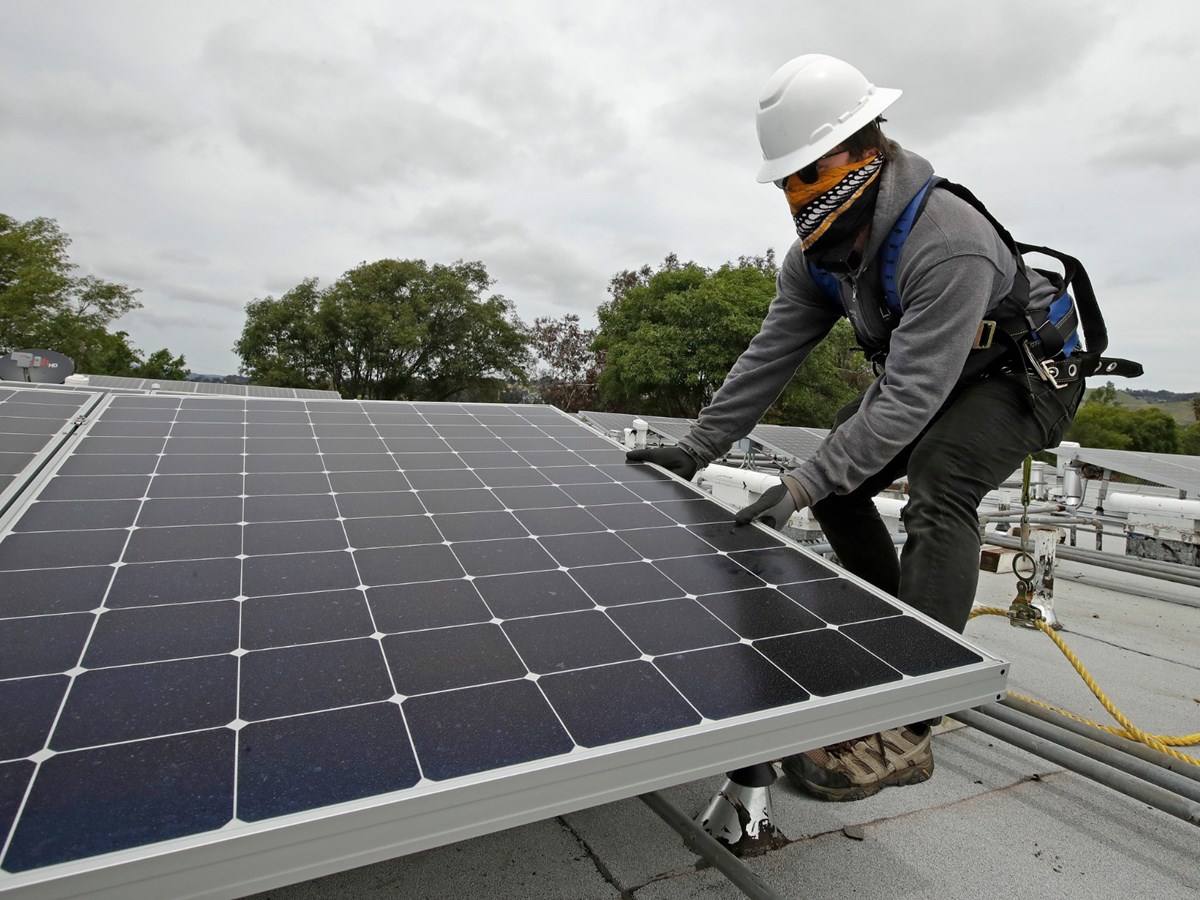 Summer Rogers had her eyes on solar energy for years. But it wasn’t until 2018 that she’d finally been able to get together the funds to install it at home. She lives in a duplex, living in one unit herself and her mother in the other, and solar now powers everything in both, except for the stove.

Her reason, originally, was environmental. But she’s reaped other benefits since, she said: “Once I got into it, I realized this is a good financial decision, too.”

In the winter, Rogers says she pays around $30 a month, which includes the $10 fee from her provider, PG&E, for distributing the energy. It’s less than what she paid before installing solar panels, which was usually around $140.

This lower rate is all thanks to California’s net energy metering program, which was created to incentivize the installation of rooftop solar.

Through this system, people who’ve installed solar at home are connected to a utility’s power grid and are able to transfer power they don’t use onto it. This offsets their own energy costs as they serve their own electric needs and receive a credit for what’s put back onto the grid, often resulting in lower utility fees, as in Rogers’ case.

But in the wake of California’s recent proposal to cut rooftop solar incentives, Rogers sees the financial benefits of her decision threatened.

In the proposal, made public by the California Public Utilities Commission in December, a monthly “grid participation charge” of $8 per kilowatt would be added for homes using solar. Rogers’ system powering her duplex uses 5.9 kilowatts, so her monthly charge would increase from $10 to about $47.

“It almost works out to what we had before, like the solar panels aren’t doing us any service,” Rogers said. “There’s something wrong with that.”

The proposal was submitted by Martha Guzman Aceves, who is one of five commissioners on the board (although she is soon leaving this position for one at the EPA). The hope is that this new approach will allow solar to continue expanding while alleviating the burden on non-users, who the CPUC says are paying higher rates for their power.

“What the decision is trying to do here is to balance minimizing impact on rates for those who don't have solar,” said Mohit Chhabra, a scientist with the Natural Resources Defense Council, which supports the proposal. “But they’re trying to balance rate impact on the customers with trying to keep rooftop solar, and now solar plus storage, a viable option for future customers.”

But both solar company executives and rooftop solar supporters, hundreds of which have opposed the proposal as part of the Save CA Solar Coalition, say it will do the opposite.

“By charging solar users an average of $50 a month, just simply for having solar panels, this is now not just gutting the net metering program,” Del Chiaro said. “It’s also a ‘kill rooftop solar’ proposal.”

“The first reaction was [that] no middle- or working-class person will be able to afford solar if this proposal was adopted,” he said. “This proposal literally takes us back 15 years ago, to when the only people that could get solar were very wealthy.”

Why utilities are backing this proposal

As the country’s top solar power-generating state, California has become a leading model for a solar economy. The state first rolled out its net metering program in 1995 as one method to encourage its use and make it more financially viable for wider audiences.

High-income populations still make up the majority of solar adopters in the state. Utilities have pointed this out in criticisms of net metering, saying that the program doesn’t do enough to bring solar to low-income populations.

In a statement on the CPUC website, the current net metering system is described as one that causes non-net metering users, who are disproportionately low-income, to pay higher rates for their power. The statement also says the proposal is aimed at alleviating this burden and also encouraging net-metering users to add battery storage to their systems, which helps during times of high electricity demand.  The proposal’s plan for that requires transitioning the current net metering to a new “net billing” system.

In a report by the online publication Utility Dive, a statement from PG&E described the current system as one that “resulted in deep inequities between customers with rooftop solar and those without.”

The NRDC’s Chhabra says that the grid participation charge requires rooftop solar customers to pay for maintenance of the grid in a way that they currently do not.

“Without that, solar and storage customers wouldn’t be paying into the maintenance of the grid,” he said. “You have situations where someone could be depending on the grid in the evenings when it’s most constrained … but only paying into it when they consume from the grid, for only a small fraction of the time, and not paying into it enough.”

This criticism of the state’s net metering program isn’t new. Utilities have lobbied against net metering, with some success, levying similar concerns throughout the country for years.

Chhabra says it’s true that these updates would reduce the benefits rooftop solar customers are seeing now. But he says that these cuts don’t eliminate their savings, which are still aimed at creating a system where solar users make back their investments in 10 years. What’s needed is balance, he says, which is necessary in order to equally weigh those savings with the need to alleviate financial burdens on non-solar customers.

“If this charge wasn't there, then sure, people with solar would see more savings,” he said. “But then people without solar will end up unfairly paying a lot more … so it sort of splits the difference between those two.”

Backlash from supporters of solar

While solar adopters still skew toward higher incomes, reports show that user demographics are broadening: In 2019, just under half of newcomers to solar earned less than $100,000 a year.

Rosenfeld from the Solar Rights Alliance sees this as proof of the effectiveness of net metering in bringing middle-class people to solar. He agrees that solar energy is still out of reach for low-income people, and hopes that updates to the net metering program would assist these demographics without hurting the progress solar has already made.

But this proposal would undo that progress by slashing incentives, he says.

“It's insane that this is happening just at a time when rooftop solar is getting into the hands of working and middle-class people,” he said. “Why penalize them for putting solar on their rooftop?”

Advocates like Del Chiaro say that the proposed cuts to net metering would significantly reduce the payments solar customers currently get when feeding energy into the grid on top of the added “grid participation charge.” Her concern is that this will deter potential users from installing solar in the first place.

“What the commissioner has proposed is basically getting rid of net metering by reducing those credits down 80%, so they’re close to zero in terms of the value to the solar user,” she said. “And then on top of that, it’s putting in place the highest fee contemplated by any investor-owned utility in the country.”

“There’s nothing equitable about taxing people $60 a month [on average] just for putting solar panels on their rooftop,” Rosenfeld said. “Nobody gets solar under that scenario.”

Rosenfeld says that utilities’ reasoning regarding high payments for non-solar customers ignores one key factor of what drives up electricity costs: long-distance power lines. He points to recent research that further suggests building out rooftop solar infrastructure, which would avert the problems that come with power lines, could cut the cost of electricity of Californians long term.

“The ones that spark fires, the ones that go down and cause the blackouts — they are the fastest rising cost of the electricity grid,” Rosenfeld said. “Every time somebody puts solar panels on the roof and makes their own energy from the sun, they reduce their personal wear and tear on those long distance power lines.”

Key to building out solar infrastructure are battery installations, which allow solar users to store up their energy and use it for later. Rosenfeld says that the added costs from the proposal would make it even harder to install solar in the first place, which could delay that expansion.

What’s next for California solar users

This proposal would only affect consumers who pay for their energy through investor-owned utilities such as PG&E, Southern California Edison or Sempra Energy subsidiary SDG&E. Publicly owned providers like SMUD, which provide energy for the Sacramento region as well as parts of Placer and Yolo Counties, would be exempt from the proposal’s enforcement.

In order to reach California’s goals for carbon neutrality, Rosenfeld says that the state needs to promote solar in all sectors — including rooftop solar.

“We need to be doing both, and the customer-customer generated energy is a really critical part of all of us,” Rosenfeld said. “So why would we be standing in the way of that?”

Living in the Bay Area, Rogers has endured her share of summertime blackouts. She had considered adding battery storage to her solar system to provide backup energy for upcoming summers, but the CPUC’s proposal has made her reconsider.

“Now, I'm going to just wait and see because I don't want to get hit with all of these fees that just make it more expensive,” she said.

Rogers says that she’s not against changes to net metering as it exists, but the proposed changes don’t make sense to her.

“It’s like charging someone for having their own generator,” she said. “If you’re storing your own energy, why should they be able to charge money for that?”

A decision on the proposal could take place on January 27, but Del Chiaro says that it might be pushed to the following month should other CPUC commissioners make changes to it.