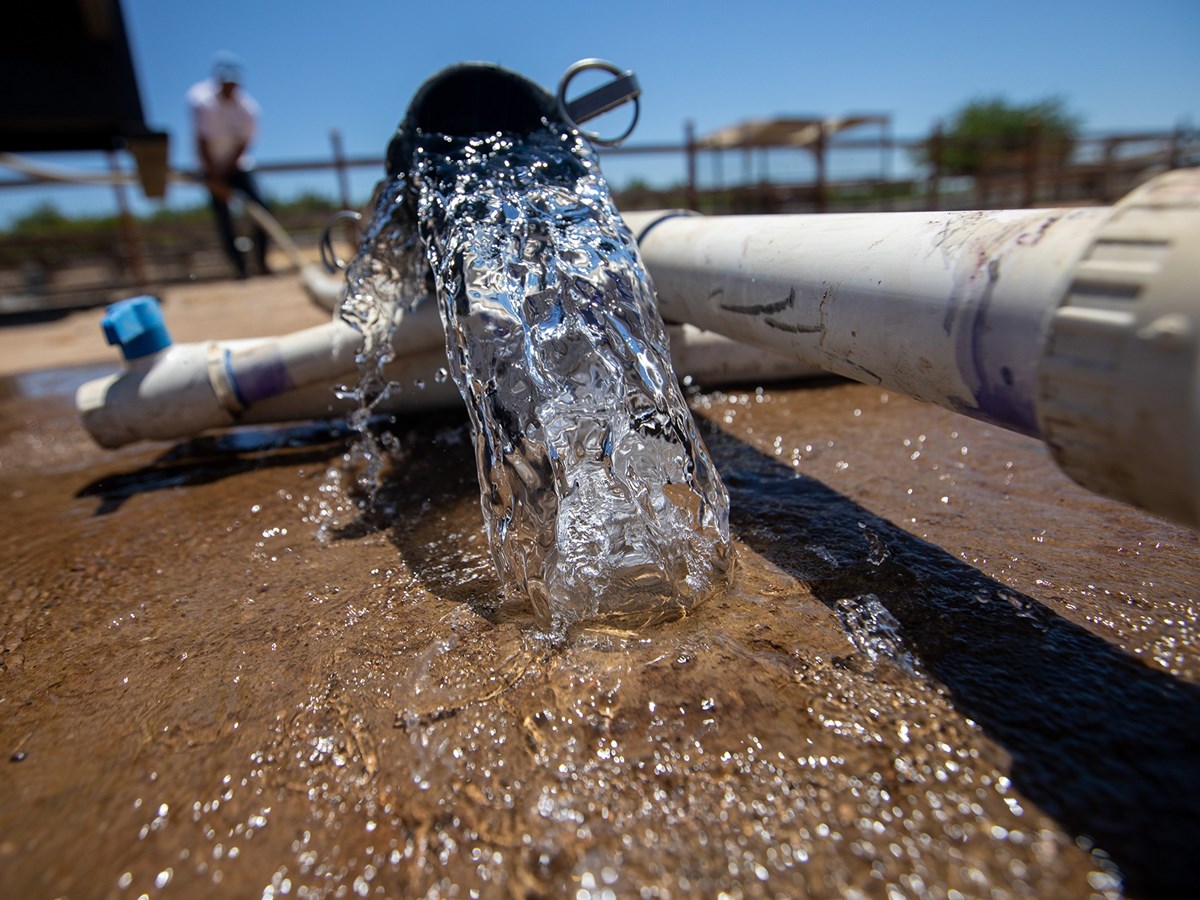 Water pours from a pipe before being connected to a water tank near Madera on June 10, 2021.

The state’s water agency today lambasted groundwater plans drafted by some of California’s largest and most powerful agricultural water suppliers in the San Joaquin Valley, indicating that they fail to protect drinking water supplies from over-pumping.

The four large groundwater basins at stake underlie stretches of San Joaquin, Merced, Madera and Fresno counties that are home to nearly 800,000 people and more than a million acres of irrigated agriculture.

The letters sent by the state Department of Water Resources to the local districts that manage the basins have a common theme: a failure to address how pumping, largely for growers, will harm the drinking water supplies of local communities. “That, in some plans, missed the mark,” said Paul Gosselin, deputy director of sustainable groundwater management at the California Department of Water Resources.

“As we sit here in this drought, the need and the promise to make sustainable groundwater management fulfill its mission and promise couldn’t be more important,” Gosselin said.

One of the districts with a plan criticized by the state is the powerful Westlands Water District, the largest agricultural water agency in the nation. It provides water to more than 1,000 square miles of prime farmland in western Fresno and Kings Counties.

A main threat in the San Joaquin Valley’s Westside subbasin, managed by the Westlands Water District, is subsidence: the risk that land could continue to sink when groundwater is pumped.

In a 17-page letter to the Westlands district, state officials raised concerns about more subsidence in parts of the basin where the plan would allow groundwater to sink from 40 to more than 100 feet below 2015 levels. In addition, Gosselin said the plan doesn’t explain how ongoing water quality problems could affect communities.

Shelley Cartwright, a spokesperson for Westlands, said the water district looks forward to reviewing the department’s preliminary findings. She said the plan “ensures groundwater levels stay at or above 2015 levels” and “avoids undesirable results and ensures the beneficial users of groundwater, such as local communities, are not harmed.”

Groundwater is the primary source of drinking water for most of the state’s more than 7,400 public water systems, and 6 million people depend on it entirely. The biggest user is agriculture, which taps into about 80% of the groundwater pumped in the state.

It’s a finite resource overdrawn by about 2.5 million acre-feet per year. And supplies are strained even further in dry times.

The problem is especially acute in the San Joaquin and Central Valleys. According to one study, groundwater depletion poses the greatest threat to the San Joaquin Valley’s domestic wells. Another tallied up to 12,000 drinking water wells that could go partially or completely dry by 2040 under the groundwater plans drafted in the region.

In response to the thousands of wells going dry during the last drought, the California Legislature enacted a package of laws that became the Sustainable Groundwater Management Act, aimed at slowing the race to deplete California’s aquifers.

Under the law, local groundwater districts in the most depleted basins were required by January 2020 to submit plans to reduce over-pumping to sustainable levels over the next 20 years. The state agency’s final assessment of the plans is due in January 2022, but agencies can start implementing them as soon as they’ve adopted them.

So far, plans have been sent back for revisions for a total of six large water basins in the San Joaquin And Central Valleys.

The decisions are not a rejection of the plans. Instead, agencies in the basins with deficient plans will have another six months to fix the problems after the department releases its January assessment. And if they’re still deficient, another agency, the State Water Resources Control Board, can step in to manage the basin.

For the San Joaquin Valley plans sent back today, Gosselin said the problems rose to the level that they likely will not be approved in January if they fail to more thoroughly manage and assess the impacts of over-pumping — including harm to drinking water supplies and well outages.

“Some of the plans indicated that there may be a large number of wells that, as the basin moves towards sustainability, may go dry,” Gosselin said. “What we're asking them to do, if there are going to be well outages, is to justify that and explain through analysis how that's not significant or unreasonable.”

The Department of Water Resources said this is “not consistent with the intent” of the groundwater law, and could allow groundwater levels to continue to decline.

Department staff raised similar concerns about a dry-year carveout in the Merced plan, and pointed out analyses, including one by the water board, that “indicate the potential for more than 1,000 domestic wells to go dry” under the plan.

The criticisms from the state agency add to those already leveled against groundwater districts in the Cuyama Valley and Paso Robles, whose plans were previously sent back for more work. They echo those raised by the State Water Resources Control Board in letters about three of the basins that pushed for deeper analysis of potential drinking water impacts.

Felicia Marcus, who chaired the State Water Resources Control Board under Gov. Jerry Brown during the last drought, applauded the Department of Water Resources for requiring plans to better protect drinking water.

“The relative equity of the thing suggests that the agricultural users should help avoid wells going dry for the domestic users. That's just the neighborly thing to do,” she said.

The Department of Water Resources says it is working on guidance for how the districts must better address drinking water impacts, since it was a common deficiency across many of the plans.

“It really is important for (the department) to say, ‘Dewatering and lowering the groundwater level so that more wells go dry is not cool,’” Marcus said. “There are a lot of things that can be done at a community level to assure that no more wells go dry, because we already have an unacceptable number to begin with.”