Food insecurity in Sacramento is higher than the U.S. average. Here’s possible solutions. 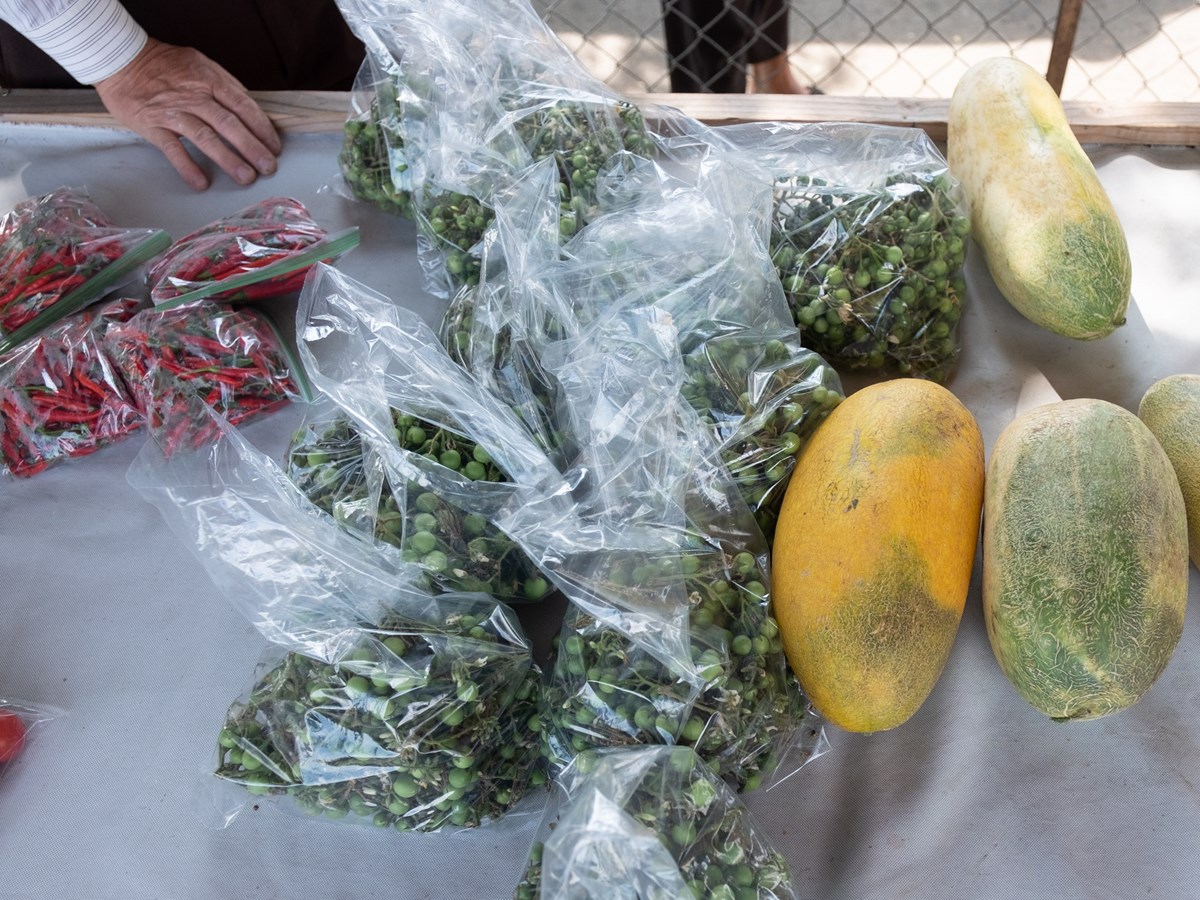 Produce for sale along the fence of a Hmong garden on Lemon Hill Ave. in Sacramento, Calif. Tuesday, Oct. 5, 2021.

At the edge of a parking lot off 24th Street sits an unassuming gray building. Walk inside, though, and you’re greeted with pallets of canned fruits, boxes of seasonal produce — right now, a colorful array of cherry tomatoes, apples, yellow, green and red bell peppers makes up much of the stock — and even Keurig coffee pods.

On weekday mornings, the South Sacramento Interfaith Partnership Food Closet is a hub of activity. As many as 100 people a day filter in to pick up anything from pre-packaged lunch boxes to fresh pomegranate seeds. 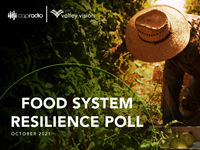 Food banks are the warehouses that store all goods that get distributed to food pantries, which then directly give food to residents. Those pantries, including SSIP Food Closet, are like other forms of government-run food assistance and help make sure low-income people can get fed.

There is definitely need in the Sacramento region, which reports higher levels of food insecurity than the national average. Results from a Food System Resilience poll released this week by Valley Vision and CapRadio show 16% of respondents saying they experienced low or very low food security, with 25% participating in at least one food assistance program in the past 12 months. That’s compared to the U.S. Department of Agriculture reporting that 10.5% of U.S. households were on food assistance in 2020. 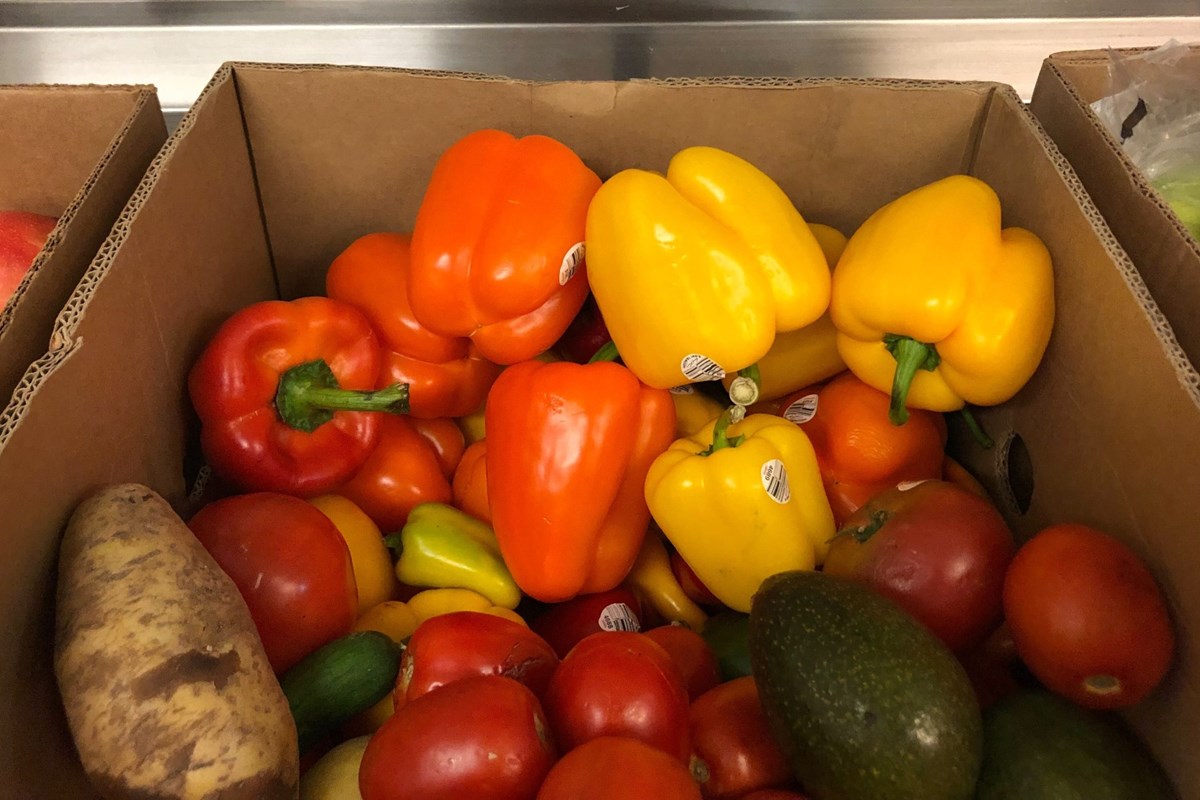 Brightly colored, in-season vegetables and fruits are some of the few items visitors to the South Sacramento Interfaith Partnership Food Closet can pick up.Janelle Salanga / CapRadio

The process for getting federal food aid isn’t always easy, either: it requires paperwork and, for many, translation services that might not be available online. That’s where food pantries can be helpful.

Based on numbers from the Sacramento Food Bank and Family Services, in the first two months of the pandemic it went from feeding around 150,000 people to 300,000, according to president and CEO Blake Young.

“Fifty percent of our growth during the pandemic were people that had never reached out to a food program before,” Young said.

But according to the poll, only 12% of respondents said they used food pantries, compared to the 98% that reported going to grocery chains.

Despite the help they provide many families, most Sacramento food pantries are in areas that are far from grocery stores. Food pantries are “just filling in a gap” and aren’t solving the root causes of food insecurity, according to Alana Haynes Stein, a PhD candidate at UC Davis currently working on mapping food banks nationwide.

The limits of food pantries

Food pantries can be helpful given that the process for getting federal food aid isn’t necessarily easy, said Dr. Catherine Brinkley, an associate professor at UC Davis’s department of Community and Regional Development.

“You have to qualify several times over, and if you’re undocumented, or showing up at an office is just outside of your reach of what you can cope with in addition to other struggles, then food banks help supply food without asking questions or needing qualifications,” she said.

(Here’s where you can find a pantry near you.)

Unlike the SSIP Food Closet, most only distribute once or twice a week during what’s usually a one- to two-hour slot in the morning or afternoon. Most are in communities where many households don’t have cars, so lining up public transit schedules can be another challenge.

According to the CapRadio/Valley Vision survey findings, communities of color were more likely to access food banks than white people — which might be in part because several food pantries in Sacramento are located in census tracts where a majority of the population are people of color. 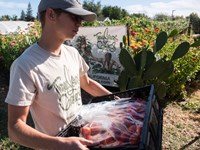 Many in the Sacramento region lack access to fresh and local food, CapRadio/Valley Vision poll suggests

And over a third of the poll’s respondents using food assistance programs said they had to drive more than 15 minutes to get to their food outlet of choice.

When it comes to outreach, language can again be a barrier for people, according to Food Closet manager Simon Yeh.

“A lot of times, for our clients, English is their second, maybe third language,” he said. “We’re trying to go into schools and talk to counselors, social workers, where a lot of times it’s the kids that are the connecting point between whether [a family] will have food or not, because the kid has the English element.” 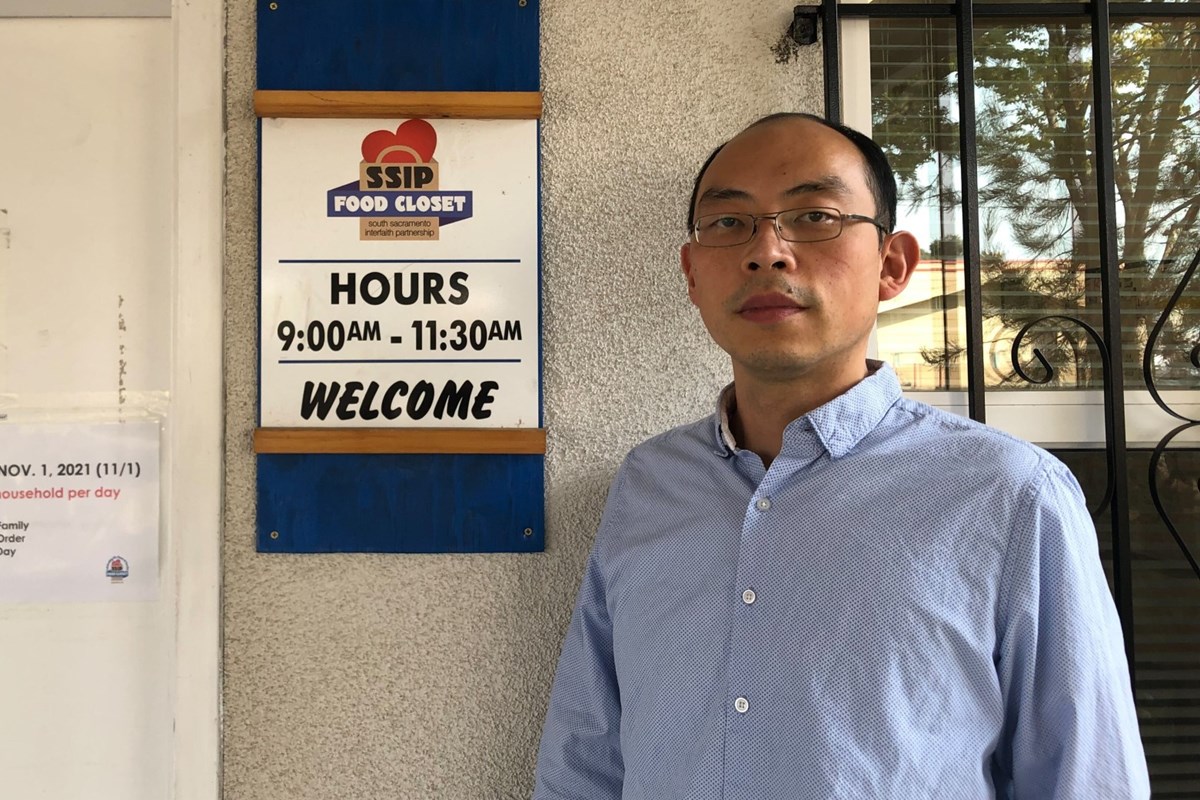 Simon Yeh, the manager of SSIP Food Closet, stands outside the entrance of the building.Janelle Salanga / CapRadio

Most food pantries are also housed in churches, which can be a deterrent for those who aren’t comfortable in religious spaces.

To Erick Sanchez, who volunteers for the mutual aid group Sac Red Meals, it’s important that the organizations distances themselves from church groups.

“Mutual aid ... is being able to help out communities and not in a way that they feel if you leave, they can’t take care of themselves,” he said. “Thanksgiving dinner, Christmas drives — those things are only momentary — they’re like consolations you get from a gift store.”

Sac Red Meals distributes meals to homeless people at encampments on Sundays. Their focus is on building relationships with the people they help feed, Sanchez said.

“The food isn’t pre-packaged, allowing for more interaction with the person,” he said. “Volunteers get their phone, email and name, and ask if there are any specific needs they can help with during the week.”

But unlike bigger food pantries, they have limited resources — another common obstacle for groups seeking to distribute food.

Stein, the PhD candidate, said that because food pantries generally recruit resources from local communities, if the area is poor, the pantry has fewer resources to draw on, as well.

“It really localizes the issue and can be a burden, especially on poor areas,” she said.

Sacramento is patterned with food deserts, which the USDA defines as areas with majority low-income populations where a substantial share of residents can’t easily access a large grocery store.

But there are several of those food deserts that lack food pantries.

These locations, hours and requirements were confirmed by calling each pantry listed. There are others listed on the Sacramento Food Bank and Family Services site and others, but CapRadio was unable to reach them for confirmation.

“Food deserts ... don’t necessarily reflect who has actual access because it doesn’t take in the component of whether you can financially afford the food,” she said.

Brinkley, the UC Davis professor, added that conversations about food insecurity that focus on food deserts have routed public funding toward the construction of grocery stores and away from programs like CalFresh.

But there remains need for assistance: Ninety-one percent of food insecure respondents in the CapRadio/Valley Vision survey said they used their pandemic relief stimulus checks to purchase food and groceries.

With regard to existing solutions, Brinkley said that cooperative grocery stores, which consider community input, can be more viable. She also said relaxing legislation around street vending — since they sell affordable food that reflects the community’s cultural tastes — could further support the food insecure.

And some food pantries, Stein said, are looking at ways to expand their reach.

For example, Yeh says he sees what he calls the “7/11 concept” with Sacramento food banks. There are multiple food pantries, but the food they give out might not be what someone eats — like halal food — so people have to keep searching.

“One way to get better access is to be able to better coordinate amongst all of the network [of food pantries] to better match food with client need,” he said. “Let’s look at this as an ecosystem with certain agencies catered based on geographical regions.”

He thinks it’s important that food pantries in Sacramento function as a network that streamlines distribution based on demographics. For example, he said, there might be areas where people want ready-made foods because they don’t have kitchens to cook. He'd like to see the network redirect individuals to the most appropriate pantries.

“If the food doesn’t match [cultural needs] very well, it’s just not a good way to meet needs and make sure that people are not hungry,” he said.

Stein says figuring out solutions means reckoning with the root cause of hunger.

“Hunger is an issue in our society because of economic inequality, which is also tied to systemic racism and many other forms of inequality,” she said. “Eliminating those issues would eliminate hunger.”

Later this October, the Sacramento Region Community Foundation is expected to release its 2021 Food System Action Plan, which contains policy and practice recommendations to help make the Sacramento region’s food system more equitable, sustainable and inclusive. You can provide input and watch listening sessions about the plan here.

Find a food pantry near you:

These locations, hours and requirements were confirmed by calling each pantry listed. There are others listed on the Sacramento Food Bank and Family Services site and others, but CapRadio was unable to reach them for confirmation.