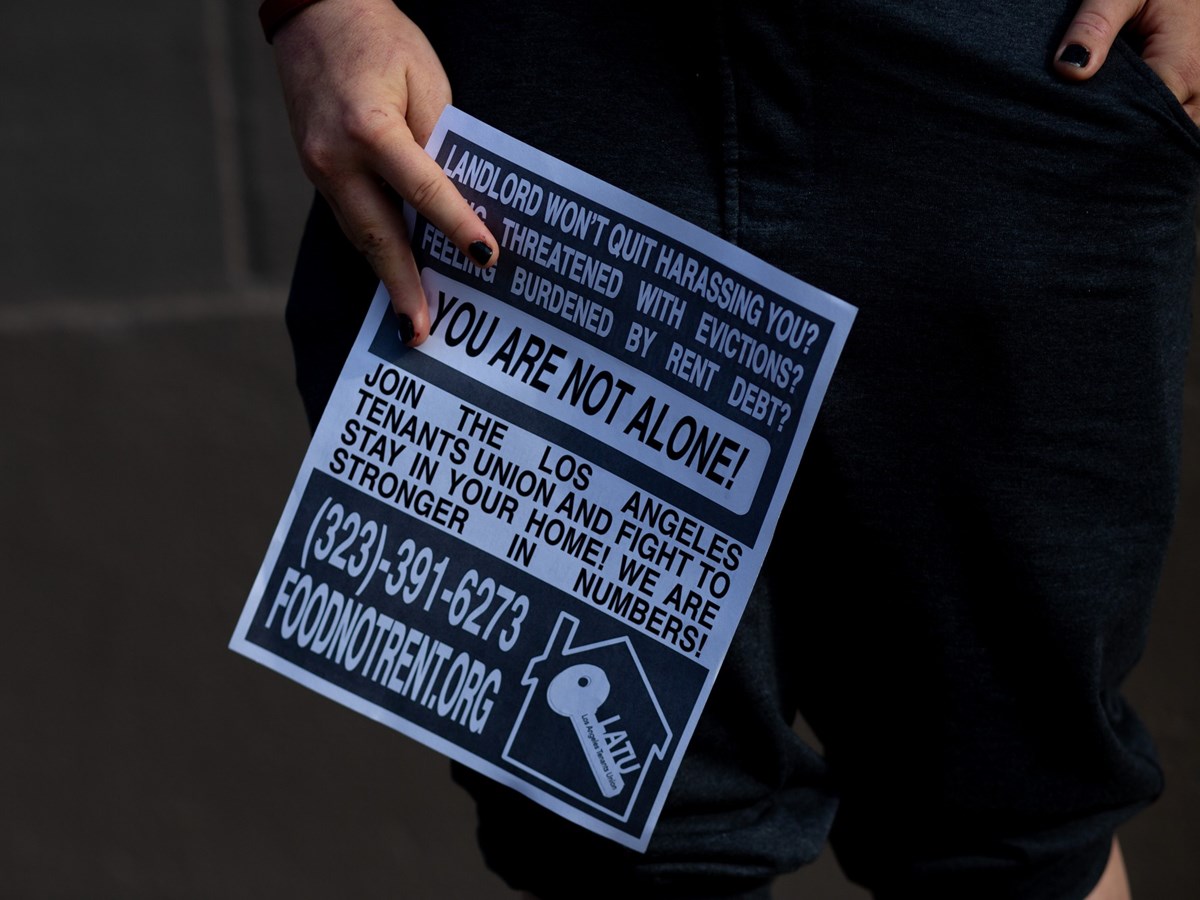 Jordan Lyric holds a rent strike poster in Los Angeles on May 6, 2021.

Despite an initial slow rollout of rent relief money, the state of California is extending and more than doubling its deal with the outside contractor it hired to get the money to tenants and landlords.

The contract with Horne LLP, a Mississippi-based accounting firm that specializes in disaster relief, jumped from $51.7 million when the program kicked off in March to at least $146.8 million in the amended agreement signed on Sept. 16, according to documents obtained by CalMatters through a public records request.

Under the new contract, which goes through March 2022, Horne will be responsible for administering $2.6 billion in rent relief, up from $1.15 billion when the program kicked off in March.

The increase follows the doubling of federal rental relief funds for California to $5.2 billion and the decisions by several big cities, including Los Angeles and San Francisco, to hand over their local rent relief programs to the state, according to Geoffrey Ross, deputy director at the California Department of Housing and Community Development.

Ross said the cities previously administering their own programs joined the state because of increased efficiencies; for example, the state can easily redistribute funds if one city or county has leftover money. He also said that local officials saw the state’s success with its contractor.

Horne, which has made emergency rent relief a line of business, isn’t in charge of distributing all the money that California has. The remainder of the $5.2 billion available for rent relief is being handled by local jurisdictions that are still disbursing the first round of funds, including Los Angeles, and those running their own programs for the second round, including Sacramento, Stockton, San Diego, Oakland and Alameda.

The amount that the state, and Horne, handles could increase if local jurisdictions also choose to hand over their program to the state, or if California gets anticipated leftover federal funds from other states.

But State Auditor Elaine Howle warned last week that California could lose as much as $337 million in federal rent relief because of how it reports spending to the feds. The Housing and Community Development Department disputes that will happen.

“Even though it’s a sizable amount of money, we’re able to actually now deploy additional resources,” Ross told CalMatters. “We have a pretty significant cost savings when you were to compare what it would cost for all 49 jurisdictions to run this center.”

Most of what Horne is receiving will go to staffing, which Ross said the company had already quadrupled, to about 1,200 employees, since the start of the program.

If the state decides additional staffing is needed, the contract says Horne would provide 200 more employees within three weeks at an additional cost of $4 million a month to the state.

The money budgeted to pay Horne could technically be redirected to landlords and tenants if the company uses less staffing than predicted, Ross said.

This is only one of a multitude of contracts worth tens of millions of dollars the state has signed with outside vendors in response to emergency needs related to the COVID-19 pandemic. They include several to fix problems with unemployment benefits getting to jobless Californians. Some other deals have had problems.

Ross said the state had received multiple bids for this contract, and determined that Horne was the most qualified because of its expertise in disaster relief, including rent relief in Texas. While that rollout also started slowly, it has improved, according to media reports.

The state of California was unprepared to create the software or hire employees to get the money out in time before it started to be clawed back by the feds, Ross said.

“It is really hard to fully understand what’s the appropriate dollar amount for these kinds of things, particularly, to be honest, of a program of a scale and speed, which is fairly unprecedented,” said Vincent Reina of the University of Pennsylvania, whose research group has been studying rent relief distribution in California and Los Angeles.

To evaluate how effective the program has been, Reina said to look at three components: the total dollars distributed, the rate at which distribution has increased and whether the dollars have reached those who need it most. “And that’s where the data becomes really complicated,” he said.

This week, the state announced it has paid out $584.8 million to nearly 50,000 households, about a quarter of the $2.6 billion available. That’s a nearly 700% increase since June 28, when the state began the latest round of tenant protections, according to Russ Heimerich, a spokesperson for the state’s Business, Consumer Services and Housing Agency.

Ross attributed the faster rollout to eased federal documentation requirements, which led to simpler applications, and an increase in how much landlords and tenants are eligible to receive.

Horne and the housing department are working on a separate phone line that courts could call to corroborate whether a plaintiff in an eviction case had applied for rental assistance, Heimerich said.

One landlord, Bill Phelps, told CalMatters he had on Monday finally received nearly $35,000 in missed rent payments for the 4-bedroom, 3-bathroom house he rents out for $3,500 a month in Concord. But he had applied for the money six months earlier, on March 15, the day the state opened its portal.

But he said his tenants, an unemployed couple with two kids who lost their jobs at the start of the pandemic, still plan to move in with family at the end of the month because they’re $7,500 behind in rent.

“I talked to the tenants and said, ‘The moratorium ends at the end of the month. You’re going to have to leave. I don’t want to start an eviction,’” Phelps told CalMatters. “That’s where I made the offer: I’ll forgive the $7,500 you owe if you’re out by the end of the month. I even kicked in $200 if they need it.”

Ross said money was still available and encouraged landlords and tenants to apply for rent through December to avoid having to leave. But they have to wait 15 days between the day they receive rental assistance, and their next application.

Phelps said he didn’t know that was an option, and would consider it. But he has little faith.

“If I would get my check right away, oh yeah, they can stay,” he said. “But the way that it is, I wouldn’t be getting this money until maybe next July or August. I’ll just sort of accept my losses, and just move forward and sell the house.”