Booster Shots Are Coming. Here's How To Figure Out If You Need One 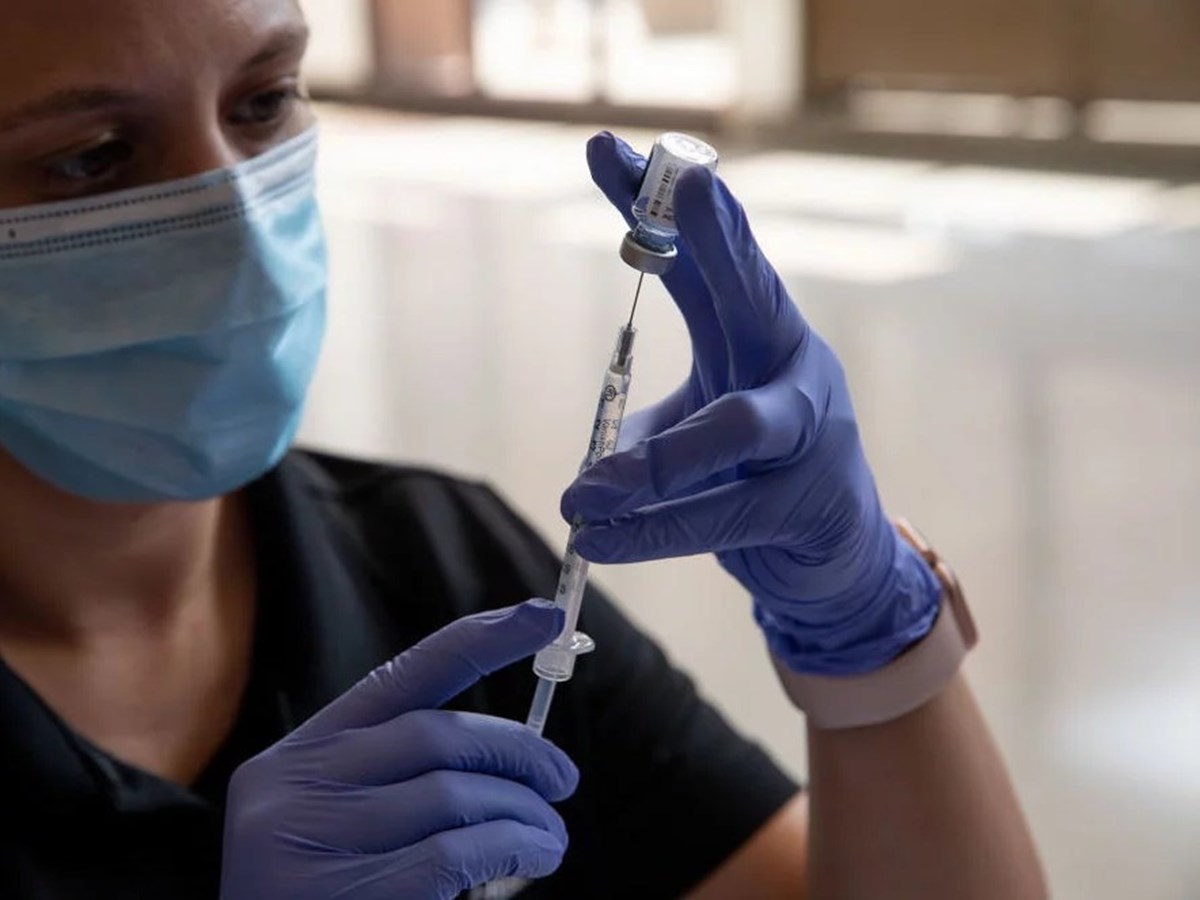 The U.S. is preparing for COVID-19 vaccine booster shots, though exactly who needs one is not entirely clear.

For the past several weeks, Dr. Boghuma Titanji has been swamped with questions about COVID-19 vaccine boosters. Even the experts seem confused, she says.

"I'm even getting questions from my colleagues, who are doctors, asking me, 'What should I do?' " says the infectious disease specialist at Emory University.

The messaging from public health officials has flip-flopped so much, she says, that it has created a mess. "How is anyone supposed to navigate all this information?" Titanji says. "It's a lot."

The messaging mayhem began last month, when the Biden administration, along with the White House's chief medical adviser, Dr. Anthony Fauci, said it wanted to roll out booster shots for all adults about eight months after their initial course of an mRNA vaccine. Surgeon General Vivek Murthy and the director of the Centers for Disease Control and Prevention, Dr. Rochelle Walensky, spoke in support of the plan.

But then just last week, some scientists with the Food and Drug Administration published a review in The Lancet outlining why boosters for the general public are not needed.

And Wednesday, when the FDA finally did authorize the Pfizer-BioNTech vaccine booster, it was only for certain adults — those over 65 and others at high risk of severe COVID-19 — at least six months after their last dose. After a contentious debate within its advisory committee, the CDC backed this plan and spelled out more detail about who should get the shot and who may only want to consider getting one.

All these twists and turns and conflicting views have left a lot of people confused. Whom should they listen to? Do we need a booster shot or not? What does the science actually say?

Who needs boosters most urgently?

There's a lot of agreement about two groups that will benefit most from getting another vaccine dose.

If you're immunocompromised or can't mount a strong immune response to the vaccine, you need a third shot of the mRNA vaccines to protect against severe disease or hospitalization. The FDA already authorized this extra shot back in August. And, Titanji says, the science is clear: "This group of people might not have mounted an appropriate immune response after the first two doses of the vaccine," she says. "So they will benefit from a third shot."

The second group is adults over 65. Both the FDA and a CDC advisory committee that met Thursday gave a thumbs-up to this group getting boosters. Several studies have shown that for older people, protection against severe COVID-19 wanes a bit over time. It's not a lot. But the concern is that the efficacy will decrease more and more over time.

For instance, the CDC reported Wednesday that, for people over 65, protection against hospitalization has dropped from about 85% to 70% in the past six months for the Pfizer vaccine and from about 90% to 85% for the Moderna vaccine.

"People over 65 have an increased risk of developing severe infections, which would land them in the hospital," Titanji says. "The farther out they are from their second dose, the larger this risk grows. So this group also stands to benefit from an additional dose."

What about people with underlying conditions?

The FDA OK'd the Pfizer booster for anyone "at high risk of severe COVID-19." Theoretically, this could include anyone with certain underlying conditions, such as diabetes or chronic lung disease, that put the person at higher risk of getting a really bad case of COVID-19. The CDC recommended that people 50 to 64 years old with underlying conditions get a booster. But it's optional for younger adults. They should assess their risks and possibly consult with a doctor before getting a booster.

Data presented at the CDC's advisory panel suggests that vaccine effectiveness may have waned slightly for adults with underlying conditions, though the data is preliminary. A study from the United Kingdom showed that waning is the greatest in older people (those over 64) who have medical conditions that put them at high risk for severe COVID-19, including transplant recipients, cancer patients and people with severe heart and lung disease.

So, if I'm healthy and young (that is, under 65), do I need a booster right now? I am worried about the delta variant and want the best protection I can get.

Given the mixed messages from the government, some younger, healthy people may be tempted to just go see if they can get a booster. In fact, some people have already been doing that. But there's plenty of evidence that you don't need to.

Scientists recommend a booster shot when there's convincing evidence that the initial doses of the vaccine don't offer enough protection. Several studies recently have shown that, for the mRNA vaccines, the opposite is true for healthy adults: The vaccines are actually still working quite well, even against the delta variant.

For instance, data from the CDC, presented Wednesday, shows that the ability of the mRNA vaccines to prevent severe disease hasn't changed significantly in the past six months. Both the Pfizer and the Moderna vaccines give more than 90% protection for people under 65.

"In the younger population, without comorbidities or additional risk factors, the vaccines continue to offer robust protection against severe disease," Titanji says.

So a booster shot may offer a little extra protection against getting sick and having to stay home to recover, says immunologist Deepta Bhattacharya at the University of Arizona, but it's still unknown how long this extra protection will last. And it isn't going to change your risk of dying or ending up in the hospital.

"The question sort of becomes, when do we need a booster versus when do we want one," Bhattacharya says. "I think that's the distinction we need to have right now. Getting a booster to stop a cold or mild flu-like illness, that's a different thing than worrying about whether or not you might survive the illness."

"We also have to remember these vaccines were designed and authorized to make sure they reduce very severe disease and deaths," she says.

Are boosters safe, especially for younger adults and teens?

Right now, there's very little direct data to answer this question, Titanji says. Last week, Pfizer presented data on about 300 patients, all adults age 18 and above. "These are quite small numbers," she says.

That said, scientists expect the booster's safety profile will be close to that of the original course of the vaccine, she says. "When you look at how safe the first and the second doses of the vaccines have been, I have the inclination to think that even the third dose would continue to be quite safe," Titanji says. "But if you're rolling it out as a policy that then extends to millions of people, you need to show that the safety continues to hold up."

In particular, there's concern that a booster shot could increase some of the serious side effects observed for the original course of the vaccination, including heart inflammation (myocarditis) and Guillain-Barré syndrome, which are both triggered by the immune response.

Both side effects are extremely rare. For instance, the rate of myocarditis is about 40 in a million males vaccinated between ages 12 and 29, the CDC reports. But the rate is the highest in males ages 12 to 17. And yet, Pfizer hasn't presented any safety data for teenagers under 18, says epidemiologist Natalie Dean at Emory University.

"Because there's so much hesitancy around vaccination, I think we should make sure we have the data for this age group before a decision is made," Dean says. "I just don't understand the value of rushing that decision, especially given that the risk of severe disease is relatively low for this population."

Could there be any advantage to waiting to get the booster?

Possibly, if you're healthy and under 65. Here's why. Right now the only booster available uses the same variant of the virus as the one found in the first two doses of the vaccine — that is, the booster shot encodes for a piece of the original variant of SARS-CoV-2, the coronavirus that causes the disease COVID-19.

But that's not the variant causing the surge in the U.S, nor is it the variant that will likely cause future surges. Some scientists, including those on the FDA's advisory committee, have brought up the question of whether it might be better to wait for a booster designed against a variant or multiple variants, which is known as a multivalent vaccine. The goal is to train the immune system to recognize and attack any future variant that might arise.

"That's definitely the future of COVID vaccines," says Bottazzi, of Baylor College of Medicine. "In fact, our vaccine center is focusing on developing a multivalent vaccine to see if we can increase the broadness of the immune response."

Last week, Moderna published findings from a study on a bivalent booster shot that contains mRNA from both the beta variant and the original version of SARS-Cov-2. In the small study with only 80 people, the bivalent booster shot elevated antibody levels about 46-fold, on average. By comparison, a booster with either just the original variant or just the beta variant boosted levels only 17- or 11-fold, the company reported in Nature Medicine.

What if I'm young and healthy but work in health care or other front-line professions like teaching?

The FDA did authorize the Pfizer booster shot for people with "frequent institutional or occupational exposure" to the coronavirus, which could put them at higher risk of getting a severe case of COVID-19. This group includes health care workers, teachers and other front-line workers. The CDC says this group "may" want a booster and should consider their individual situation and risk level.

This recommendation has been contentious because recent data from the CDC shows the vaccines holding up well against severe disease among this group.

But giving these workers a little extra protection from any infection may help society as a whole, advisers to the FDA noted on Friday.

"They may have a breakthrough infection that doesn't necessarily land them in the hospital, but it would take them away from work at a time when they're needed to respond to a pandemic," says Titanji, of Emory University.