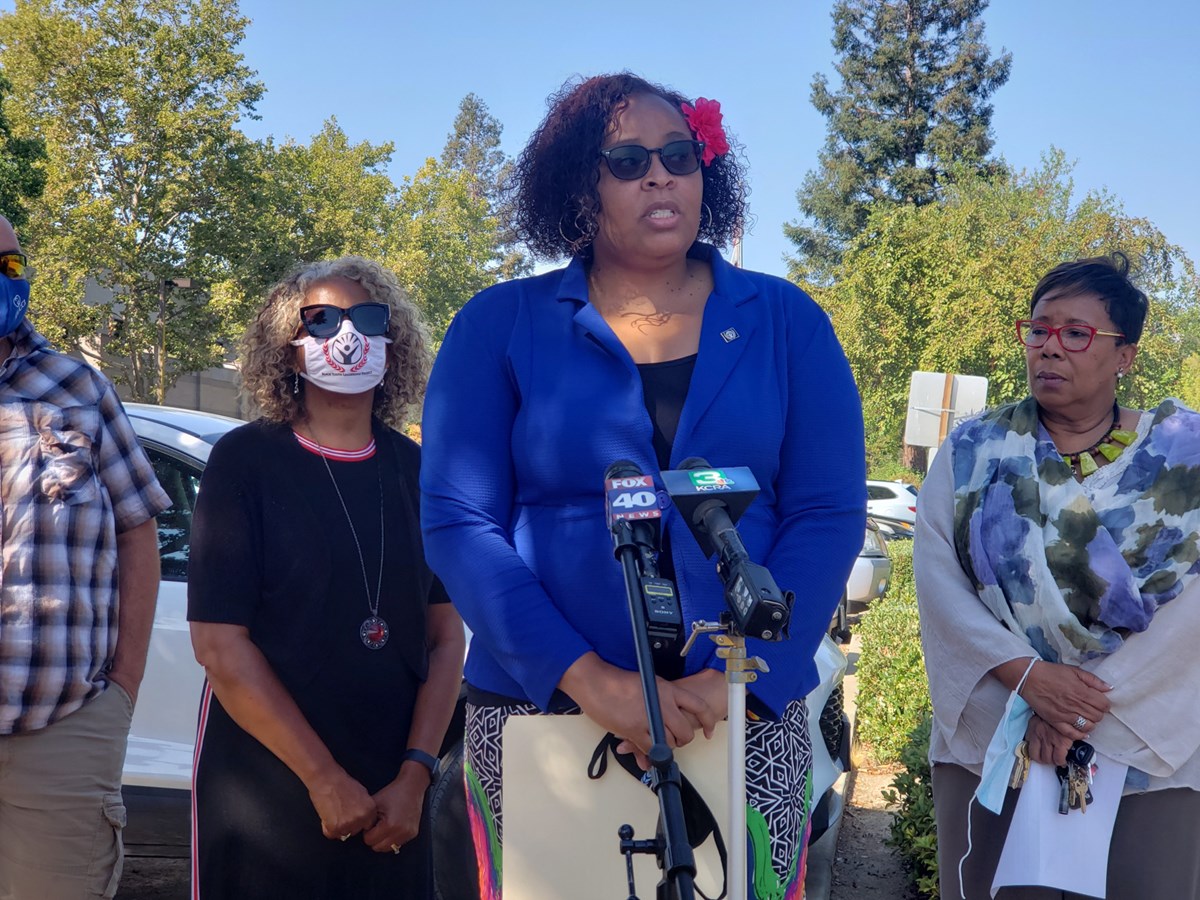 Lorreen Pryor of the Black Youth Leadership Project speaks at a press conference outside of the Elk Grove Unified School District office while Betty Williams, Sacramento NAACP President and executive director of the California NAACP, right, looks on.

On Elk Grove Florin Road near the intersection of County Sign Route E12, a small band of activists gathered outside the offices of the Elk Grove Unified School District (EGUSD) on Sept. 13 to demand the immediate reinstatement of a Black female student-athlete facing expulsion.

The 11th grader had been suspended for “defending herself during a fight” that occurred on the morning of Tuesday, Sept. 9, at Monterey Trail High School, according to a joint press release by the Greater Sacramento NAACP and the Black Youth Leadership Project.

The protest comes at a time when the district says it’s working hard to lower its Black suspensions. A Sacramento Observer investigation showed the district suspends more Black students than any other district in the state, eclipsing Sacramento City Unified, which in the latest survey ranked third. Dr. J. Luke Wood, a CSU Sacramento graduate, produced two groundbreaking surveys that called Sacramento County “California’s Black Suspension Capital,” ranking first in the state when it comes to Black suspension.

Betty Williams, a veteran civil rights activist and current executive director of the California NAACP, teamed with Lorreen Pryor of Sacramento’s Black Youth Leadership Project to ask EGUSD to dismiss the recommendation by Monterey Trail officials and the district’s Student Support and Health Services that the young woman in question be expelled.

“It's clear that they treat Black students differently than non-Black students,” Williams told the crowd. “This is a female new to the area, new to the school, who was attacked.”

She had already served an at-home suspension for the maximum five days, increased from three days because of the severity of the allegations against her. In an attempt to “protect herself” during a fight, she had unintentionally struck the administrator who was trying to de-escalate the situation, Pryor said.

The student’s mother remembers the exact minute the call came in: 8:02 a.m. Tuesday. After an incident in the parking lot of Monterey Trail the previous Thursday afternoon had set off alarm bells, she delayed her daughter's normally early arrival at school that morning. She kept her in the car until right before the first bell rang and watched her daughter enter campus and slowly walk out of her sight.

What happened next was captured on grainy video, which was provided to The OBSERVER by BYPL.

“I was just pulling out of the Monterey Trail parking lot when I got the call,” said the girl’s mom, speaking anonymously. “She was sobbing, saying that the girls had jumped her. So I then pulled right back in the parking lot.”

They had just returned to town, her mother says, after having left for the Labor Day holiday weekend.

“I was walking through the campus, lost, trying to find the office because we are new here,” she continued. “I crossed paths with the VP comforting one of the girls. I knew it was one of the girls because it was the same girl from the parking lot.”

The mother described the precipitating incident in the school’s parking lot the previous Thursday: she had already backed out of her parking space and had entered the lot’s exit lane. The other student involved in the incident was backing out as well with a car full of girls. “I beeped the horn nicely. She kept going and I beeped the horn again, this time louder because she was getting close to the car. … She stuck her head out and started saying a bunch of profanity.”

Her daughter in the passenger seat immediately took offense and verbally backed her mother, saying, “Don't call my mom that. Don’t call my mom the B word.”

“The girls were basically trying to get my daughter to get out of the car and come fight. I just rolled up my daughter's window,” the mother said. “We started to drive away and she pulled up on the side of us as we tried to leave the parking lot. She was like ‘Get out of the car. Pull over. … Come catch this fade.’”

“(The Sept. 9 incident) was a continuation of something that wasn’t nipped in the bud,” Pryor said. ”This was a pre-coordinated attack. Because it stemmed from that Thursday interaction.”

Because of the Labor Day holiday weekend, the mother said she didn't have a chance to report Thursday's incident to the school.

After her daughter got home that day, the confrontation continued online. “The girl reached out to my daughter on Instagram, sent her a message. … I became privy to it, after the fact. I told my daughter that she needed to send her a message that she was a student-athlete; that she didn’t want to fight at school. None of that stuff. She never messaged my daughter again. So I thought it was done.”

In the video, although grainy, it is clear that what starts as “mutual combat,” a term used in education codes and U.S. courts to describe the intent of two persons to engage in a fair fight, quickly becomes a “jumping” or mob action involving multiple parties fighting a single person. The activists agree that the student-athlete engaged mutually in combat.

But the district, “instead of going in and making sure that all of the students were given equal discipline, went after the Black student only, and not just for suspension, but expulsion,” Williams said. The NAACP takes issue with the district's tendency to go to the highest punishment where Black students are involved.

Williams took issue with the district having investigated without inclusion or consideration of Dr. Wood’s report. “I was like, how can you police yourself?” she said.

Pryor added, “They are number one in the state for the expulsion of Black children … not men and women – these are children. This is a thing that seems to be lost on them when they are meting out discipline.”

The video completely contradicts the discipline form that was sent to the family, Pryor said. “What we assert is that it is no longer mutual combat when you have two additional children then jump in and start attacking her. I think what’s lost in this is the discipline form — the vice principal erroneously stated that this child struck him three times in the back of the head causing a concussion, which is not supported by video evidence. She did not reengage.”

“What you will see (in the video) is that she is reaching over him to get to the girl on the other side of the administrator,” Pryor said. “When you jump into a fight that is already in progress, you run the risk of being hit. Period. There has to be a difference in the way we mete out discipline when children strike administrators purposely — justifying that charge of injuring a school employee — and when they are in commission of a fight and an adult comes into the interaction.”

Pryor wants more than the student’s reinstatement. “We are calling on the school district to relieve this VP of his position,” she said. “I want him gone. Because he created a paper, a record that will follow this child.”

After a Sept. 13 hearing to determine whether the recommendations for expulsion would be accepted, the district decided to reinstate the student. She completed an expulsion abeyance contract, a binding agreement in which the student, the parent, and the district all sign off on expectations of conduct. Violations of these expectations will lead to the student’s eventual expulsion. It gives the student the chance to return to class, but also gives the district the power to expel her if they feel the contract is violated. Tuesday morning the student-athlete was back in class.

“We have a discipline matrix that when certain incidents occur on campus, we follow that matrix and that’s something that is in our parent-teacher handbook. The letter that Lorreen Pryor showed me is a part of that process,” Soriano said. “There are several steps in our discipline matrix. But it seems like our administrative staff at the school was managing the situation and following due process.”

When is it appropriate to break up a fight?

“Student safety is number one,” Soriano continued. “When you have an altercation you have the potential of two students to really hurt each other. Having that happen is not ideal at all. But that doesn't mean you call in other people, for example law enforcement, in order to manage it. Usually students could be talked out of doing things, but in fights students can get tunnel vision.”

Soriano said the district also has an “Ed code” that it follows when staff is investigating a situation on campus.

The discipline matrix, while clear on the steps that the district can take in order to deescalate the discipline of a student, doesn’t seem clear on the appeal process that a parent or advocate could undertake to clear students’ names.

No step-by-step instructions for fighting the expulsion or suspension of students exist. Parents are left to seek out community advocates like Pryor and the BYLP to guide them through the process.

The activists also have a deeper ask of the district: they want protection for the student-athlete in this case. They don’t want her going back to school and encountering the girls from this fight without mediation to find out what the problem was in the first place. Pryor is clear that “if you are just going to suspend without broaching the why of it…then we are just going to have more of this.”

EDITOR’S NOTE: A.V. Benford is a Report For America Corp Member and an Education Reporter for CapRadio News and The Sacramento Observer. Support for this Sacramento OBSERVER article was provided to Word In Black (WIB) by the Chan Zuckerberg Initiative. WIB is a collaborative of 10 Black-owned media that includes print and digital partners.