Firefighters wrapped foil around the base of the General Sherman tree to protect the gigantic sequoia from an intense wildfire.

The world's largest tree recently got a blanket to help protect it from a raging wildfire. Photos of the sequoia named General Sherman — with a base measuring a massive 36 feet in diameter — set off a flurry of interest in why and how a blanket might work against flames.

The KNP Complex Fire has now burned 23,743 acres and is 0% contained, Sequoia & Kings Canyon National Parks said in an update Monday morning. The fire has grown by thousands of acres in each recent day.

General Sherman looms over the north end of Giant Forest in Sequoia National Park. Firefighters and park officials have been on alert in recent days, as the KNP Complex Fire has neared the area.

Intent on saving General Sherman and other high-priority trees, firefighters wrapped sequoias in aluminum-based blankets, sheathing the trees' foot-thick bark with a synthetic material to help them survive.

There are signs that the strategy worked: The famous Four Guardsmen, sequoias that stand at the edge of the forest, were saved over the weekend.

Blankets have already been used to protect houses

The sequoias are "wrapped with house-wrapping material, kind of an aluminum-foil fabric that goes around the base of the trees," firefighter Jon Wallace, who is the operations section chief for the KNP Complex Fire, said on Friday.

Firefighters are using the blankets "to prevent embers from getting into the tree through old fire scars," Christy M. Brigham, chief of resources management and science at Sequoia & Kings Canyon National Parks, told ABC station KGO-TV.

Fire scars, or "catfaces," pose a particular threat, as they can give an opening to a new fire to attack one of the giant trees. As crews mop up spot fires, they're also taking care to douse any fire scars on sequoias, Wallace said Monday morning, providing an update on the effort. For high-priority trees, blankets were used to help cover those scars. 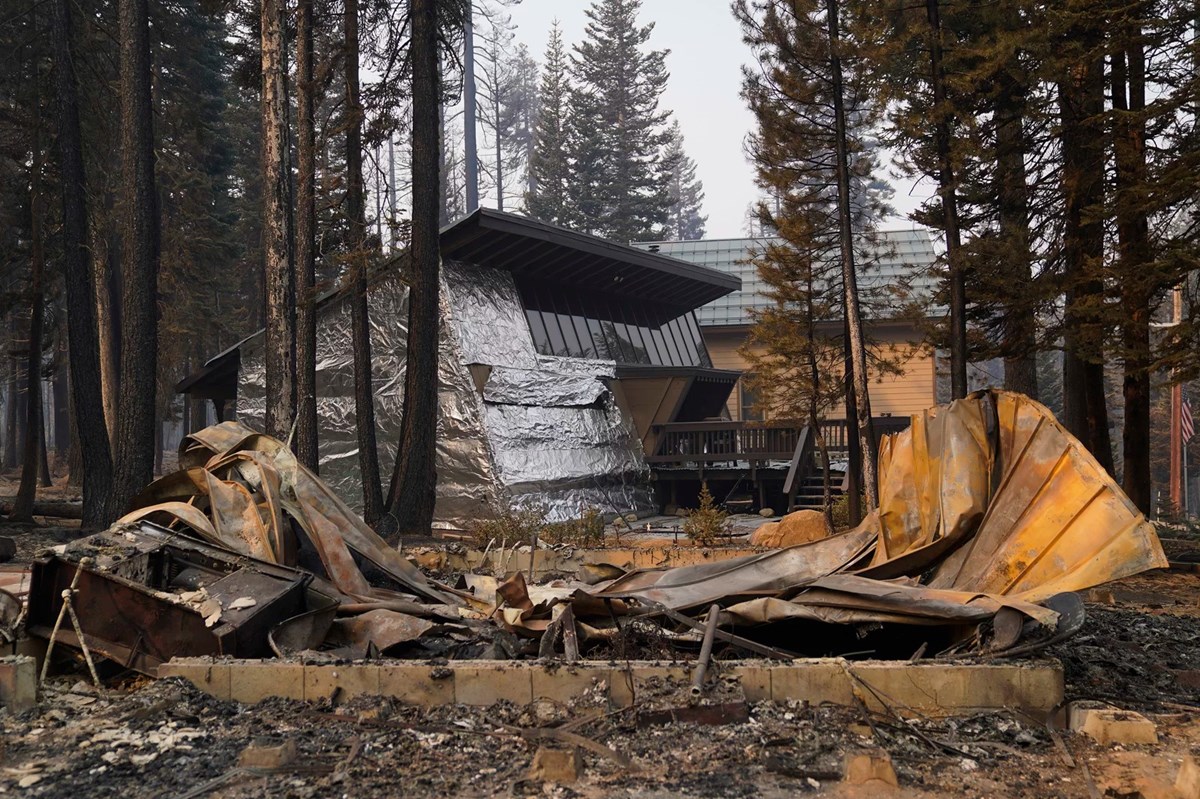 Aluminum wraps designed to protect homes from flames are getting attention as wildfires burn in California.Jae C. Hong / AP Photo

"The fire blankets have been used for a long time to protect structures," Brigham said.

"We basically told the fire crews to treat all our special sequoias like they were buildings and wrap them all up, and rake all the litter away and roll away the heavy logs," Brigham told CNN.

It's not all about the aluminum

The shiny fire blankets have attracted a lot of attention, but they're not the only tool firefighters are using to protect the ancient sequoias.

Work crews have also been moving duff — decaying organic matter on the forest floor — away from the trees.

"We don't want that duff catching on fire and smoldering long term at the base of those trees," Wallace said, adding that it could "start cooking the roots."

"That's really what's going to hurt them," he added.

The extraordinary steps are being taken to protect the trees, Wallace added, because of the intense dry conditions in the forest.

Along with those measures, firefighting crews have been digging fire lines and conducting protective burns in some areas near trees, lodges and other structures in the park. Aircraft have also been able to fly over the area, dropping to help limit or put out flames.

Sprinklers were also used "pretty much nonstop" to protect the museum and other buildings near General Sherman, Wallace said on Sunday.

Access has also been key. In the area of the Giant Forest, firefighters were able to use walking paths to combat the nearing blaze. And with large trees falling across highways, timber cutters have been sent to clear roads and maintain vital access for firefighters.

"The fortunate thing is, the Park Service has done a lot of prescribed burning in there since the 1960s," Wallace said as he described the firefighters' task of protecting the Giant Forest.

"So it's making their job a lot easier," he said.

When flames ran through the brush and up a slope toward the forest, Wallace added, their height dropped from fearsome heights to a much more manageable 2 or 3 feet.

Teams from @SequoiaKingsNPS @sequoiaforest and others are rapidly identifying the sequoia groves surrounded by overgrown forests. They hope to use prescribed burns and other tools to make them more fire-resistant. But to move quickly, huge challenges remain. 5/ pic.twitter.com/OAYAM3eqIY

Sequoias can live for thousands of years — some of the specimens in the 68 groves along the Sierra Nevada's western flank have been alive for more than 3,200 years. These trees have lived through fires before, but officials are concerned by recent wildfires' frequency and intensity.

Experts are now working to identify which sequoia groves are overdue for a controlled burn and are most vulnerable to wildfires, through a project called the Giant Sequoia Lands Coalition. The group's members range from federal agencies to the University of California and the Tule River Indian Tribe.

Sequoias are "pioneer" trees that rely on fire to reproduce

Giant sequoia trees "need the unpredictable heat of fire to reproduce," according to the California Department of Parks and Recreation.

Before they can grow to heights of 300 feet or more, the department says, sequoia seeds must be released from cones — a process aided by fires, which dry and crack them open. Flames also help in other ways.

"Fire loosens the soil, allowing seeds to fall into the mineral-rich earth and gather moisture that was previously drawn by larger plants," the department says. In the process, fires also give sequoia seedlings a chance to establish themselves by clearing out duff and growth on the forest floor.

But for about 100 years — from the late 1800s through the late 1900s — fire became a rarity in sequoia forests, after the arrival of European settlers. That triggered "a massive failure of giant sequoia reproduction," the National Park Service said.

"Giant sequoias are a pioneer species — they are among the first to take root after a disturbance occurs," according to the National Park Service.