On Wednesday, Brown walked a tightrope, seeming to want to do two things at once in his speech -- celebrate California’s vastly improved finances while calling for thriftiness with both money and water.

Brown’s State of the State addresses never lack entertainment. This year, he brought a parable and a prop to preach fiscal discipline to lawmakers.

“Boom and bust is our lot and we must follow the ancient advice, recounted in the Book of Genesis, that Joseph gave to the Pharaoh: Put away your surplus during the years of great plenty so you will be ready for the lean years which are sure to follow."

He accused most recent governors and legislatures of forgetting that advice, but vowed not to do that himself.

"To help us keep our fiscal realities in mind, I have some playing cards here," he said holding up a card. "You probably can't see this, but it's mostly red."

On one side, a chart of the budget surpluses and deficits from the last 15 years, with philosopher George Santayana’s famous warning: "Those who cannot remember the past are condemned to repeat it."

On the other side, a picture of his dog Sutter, and a quote: "Bark if you don’t like deficits."

"And so I’m gonna put this right here, just in case we forget," Brown said. 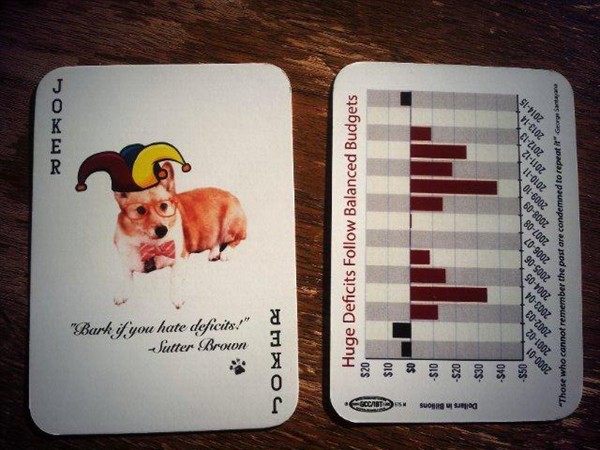 With California’s lack of water having replaced its lack of money in the headlines, the governor’s comments on the drought drew attention as well. Brown called for conservation, voluntary water transfers and a lot more.

"It’s a tall order," said Brown. "But it is what we must do to get through this drought and get ready for the next one.”

Notable this election year was the absence of any big new policy proposal, such as last year’s school funding overhaul or how to address the state’s $350 billion in unfunded retirement liabilities.

For instance, she disputes California has a true budget surplus. She points to the large federal loan the state took out to cover unemployment payments as an example of California’s debt.

"You know, we owe the feds $10 billion, that’s not going away. So we raise this tax on employers just to pay the interest. If we have a surplus, we should be paying our bills."

More reactions from other political figures

Brown acknowledged in his speech the state owes hundreds of billions on pensions, retiree healthcare and infrastructure maintenance.

"And I thought his ending line, that we need to build from the future, not steal from it, was a recognition that there are investments that we need to make in order to get a return that will benefit future generations,” Dickinson said.

But not all Democrats were satisfied with Brown’s speech. Senator Holly Mitchell said she would have like to have heard a lot more about addressing poverty in the state.

"When you consider the fact that California has the highest poverty rate in the nation, I think paying a little bit closer attention to investment in our safety net for the hundreds of thousands of California families and millions of California children that are living below the poverty line is worthy of mention and worth our attention."

Now that Brown has set his agenda for the year, lawmakers will begin to deal with the budget he’s proposed. It must be complete by the middle of June.