Like every large “megafire” within the past few years, the Caldor Fire burning toward Lake Tahoe has pushed boundaries.

“Historically, we’ve used the terms such as anomaly, unprecedented or extreme to describe the wildfires that we have seen burn throughout the state over the past 10 to 20 years,” Cal Fire official Chris Anthony said recently. “These terms are no longer appropriate.”

The main factor that officials are considering now is climate change. Researchers say rising temperatures will only increase conditions that fuel these catastrophes for years to come.

Caldor Fire: Where To Find Information And Resources

The Caldor Fire — which has forced the evacuation of more than 50,000 people — has moved quickly, like many of the megafires that have ravaged acres upon acres of California in the past few years. Firefighters repeatedly comment on how it is growing in previously unimagined ways.

There’s plenty to blame for this, like an overabundance of fuel on the forest floors feeding these flames and the year’s drought contributing to the dryness that makes wildfire growth so rapid.

But this fire’s progression toward populated areas, coming closer to communities like South Lake Tahoe, where officials had previously thought were safe from the flames, is giving firefighters and climate experts pause.

Rethinking How We Fight Fire

While California has had its share of major fires throughout its history, Chris Field, director of the Stanford Woods Institute for the Environment, pinpoints a major shift in the discussion to the 2017 fire season.

Since then, Field says officials have had to “rethink what it means to fight a fire.”

“It was a big slap in the face that we're way behind the curve in terms of what we should be doing to reduce fire risk,” Field said of blazes like the Tubbs Fire in October 2017, which burned in Napa and Sonoma counties and at the time were the most destructive in state history.

Field says there was a “convergence of factors,” including accelerating climate change, drier fuels, drought and more people living in wildfire zones, that “were just combining in ways that we weren't prepared for.”

In the last few years, major fires have proven resistant to the ways firefighters would typically battle them.

Benjamin Hatchett, who studies atmospheric science with the Desert Research Institute, says that this resistance can manifest in a couple ways. First, many of these large fires grow despite fire lines that have been bulldozed and cleared, often carrying their embers high into the air and spitting them far and away from the trenches intended to stop or slow their progression.

“None of our suppression efforts are really able to keep up when the fire is able to jump a quarter mile, a half mile, a whole mile,” Hatchett said.

None of our suppression efforts are really able to keep up when the fire is able to jump a quarter mile, a half mile, a whole mile.

And while fires typically weaken at night due to cooler temperatures and moisture in the air, some recent megafires have been able to grow at all hours.

“As we see warming nighttime temperatures and things become drier and hotter, we get less of this overnight relative humidity recovery that historically would sort of lower fire behavior at night and allow firefighters to make progress on controlling the fire and be able to do other safer operations like back burns,” Hatchett said.

These compounding issues are part of the reason why these fires are hard to contain, he says: “It really cuts into the opportunities firefighters have to make direct attacks or other types of progress on containing the fire.” 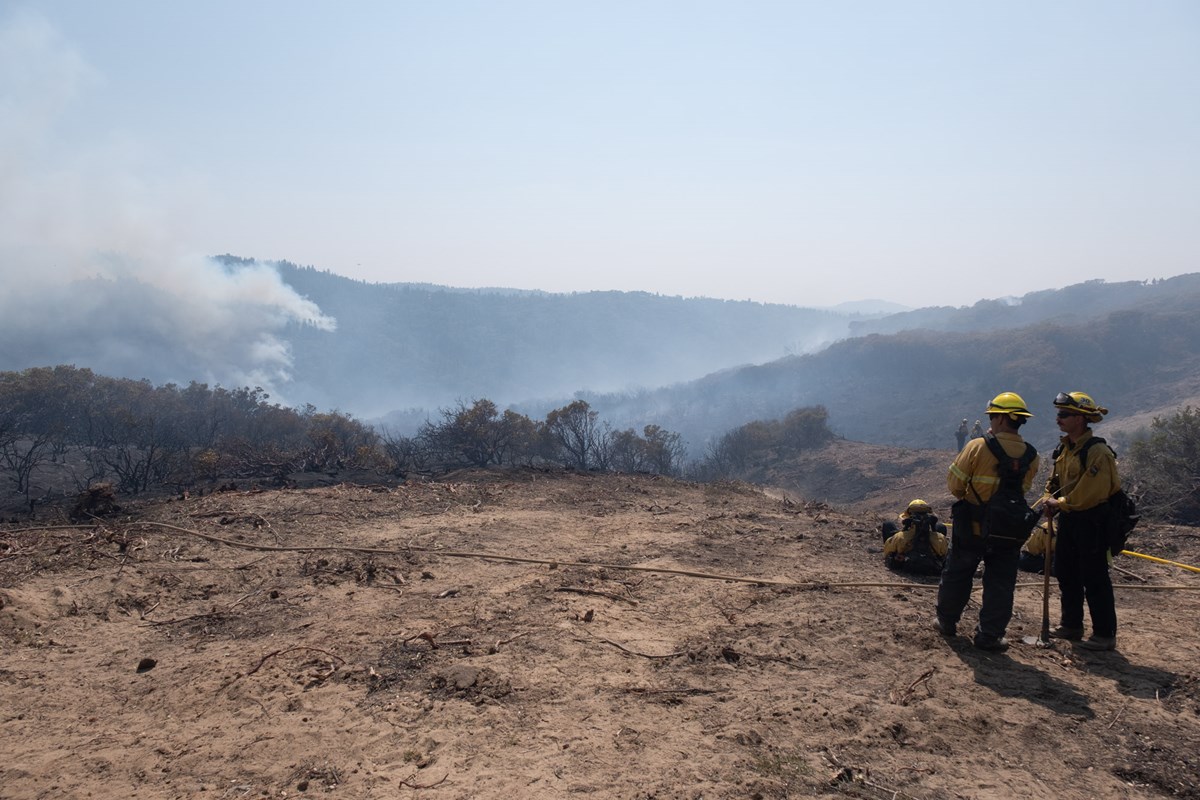 Firefighters watch over a burn operation as it winds down west of Grizzly Flats Monday, Aug. 23, 2021.Andrew Nixon / CapRadio

The existence of these fires, or even these complicating factors, aren’t entirely unusual on their own. Hausfather says that California isn’t seeing more fires than decades ago.

“We get, actually, less fires now than you did 40 years ago,” Hausfather said. “But the fires we do have are burning much wider areas.”

And that’s where Hausfather says climate change plays a part. There’s a strong relationship between the area burned in the western United States and fuel aridity, which he describes as, essentially, “a measure of how dry the vegetation is.”

“And the main driver of drier vegetation we're seeing is hotter temperatures,” he said.

The build up of fuel on the forest floor is a big part of what feeds these, but Hausfather says that this hasn’t changed much in the last few decades.

“What's really changed in recent years is how much hotter and drier it's become,” he said.

There’s no silver bullet when it comes to battling megafires.

Tackling climate change alone won’t fix the problem, just as clearing fuels or building more fire-resilient communities would not on their own, either.

It’s an impressive goal, Field says, and one that will require a substantial workforce and financial backing. But alongside these changes were last year’s fires, which burned more than 4 million acres of forest land. It’s an amount that Field says is significant enough to prompt an even more dramatic change.

Ultimately, he says that it’s going to take targeting all parts of the problem — including climate change — to keep megafires at bay.

“If we deploy them all, we can really make a lot of progress,” Field said. “Until we’re kind of [using] every tool in the toolbox, we’re going to have problems.”