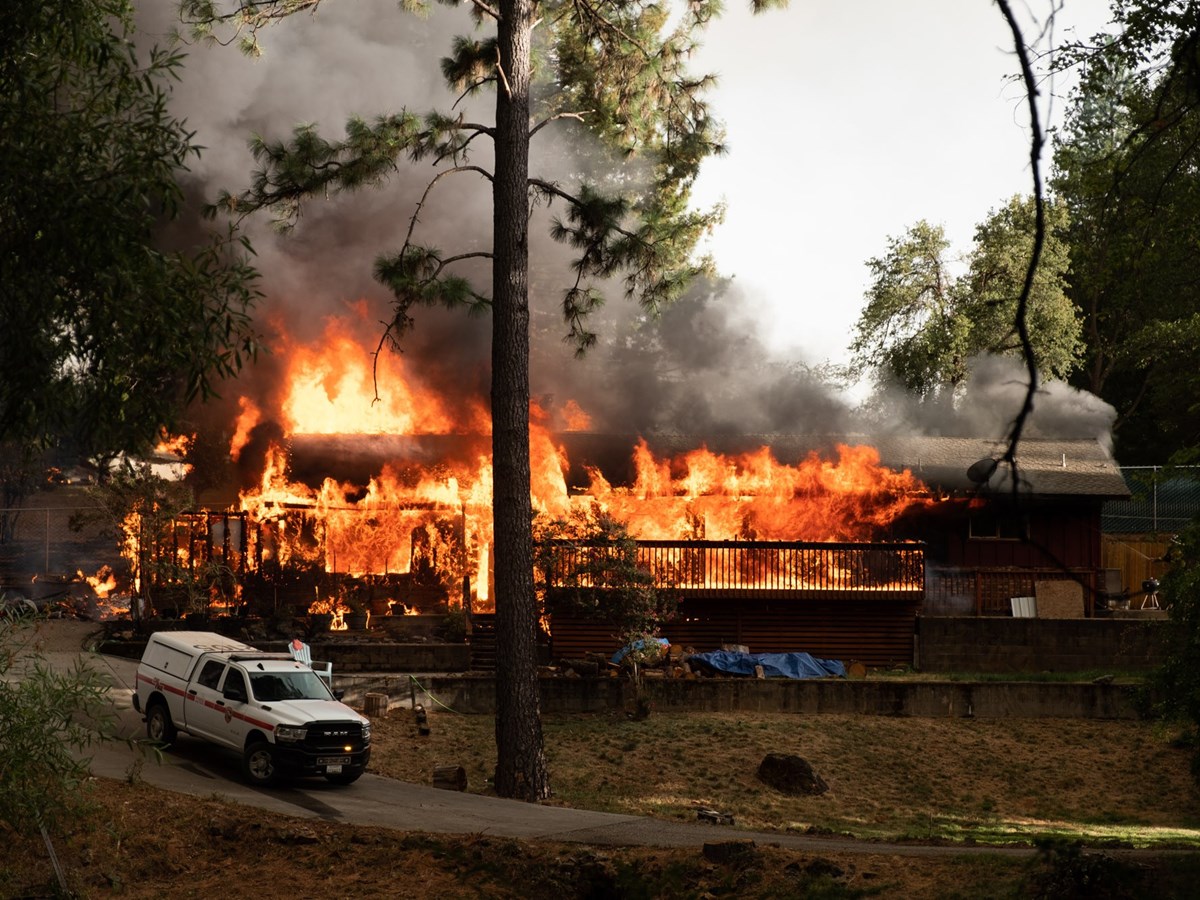 A home in the community of Chicago Park near Colfax is engulfed in flames on Mount Olive Road during the River Fire on Wednesday, Aug. 4, 2021.

This story is no longer being updated. Find Friday updates on the River Fire here.

Evacuation orders for thousands of people, including for the city of Colfax, remain in place Thursday for a wildfire burning in the Sierra Nevada foothills.

The River Fire, which ignited just after 3:30 p.m. according to video footage from a nearby PG&E tower camera, has now grown to more than 2,600 acres and is 15% contained. At least 76 structures have been destroyed, while two residents and one firefighter have been injured, according to Cal Fire.

It has been nearly 24 hours since the River Fire broke out at the Bear River Campground in Colfax. Our firefighters have been working around the clock to battle this blaze. This is what it looks like behind the fire lines. pic.twitter.com/017S9LV6VQ 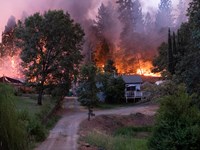 The Placer County’s Sheriff Office has ordered evacuations for residents of Colfax, a small city just off Interstate 80 approximately 20 minutes north of Auburn. There are several road closures, including Highway 174 at I-80 near Colfax. (You can find the latest fire incident and evacuation information for Placer County here and Nevada County here.)

Colfax, with a population of just over 2,000 people, is considered a “high fire risk” city, according to Cal Fire. There are more than 5,200 residents in Placer and Nevada counties under either evacuation orders or warnings due to the fire as of Thursday morning. Approximately 3,400 structures are threatened.

Cal Fire Incident Commander Jim Hudson said Thursday morning that he doesn’t anticipate that evacuees will be able to return to their homes today.

“It'll be reassessed this evening, but right now with conditions that we have, it's not safe to put residents back in their homes at this time,” he said on Insight.

Bill and Sandy Gray evacuated from their home north of Colfax and are staying in a camper with their dogs, though they had to let their 36 chickens out of their coop and left their turtles since they couldn’t find them all.

While they’ve lived in the area for seven years, they said it was their first time evacuating. The Grays knew about fire being a potential threat and have irrigated around their four acres, put a gravel path around their house and got a generator in case the water went out.

“We anticipated some of this, but there’s still ashes falling down,” Bill Gray said. “But I’ve seen, you know, in the Paradise Fire, people who say ‘At least we have our lives and each other.’ That's the most important thing.”

I spoke to Bill and Sandy Gray, who evac’d from their home north of Colfax. They’re staying in a camper.

Their home appears to be safe, though potentially in the fire’s path if the winds pick up.

“We got the dogs. We got ourselves,” Bill said. “The important things.” #RiverFire pic.twitter.com/uaSDFVVcTo

Dave Jefferis lives in Chicago Park near Grass Valley and stayed despite an evacuation order to try and protect his home and those of his neighbors.

"I was coming home from work and seeing this plume of smoke and I couldn't get home fast enough," he said. "It's been a long time since I've seen a fire like this. This is terrible."

That included rescuing an American flag from a neighbor's home before it burned.

"There was no fire trucks here at that time," Jefferis said. "So my son and I just did the respectful, responsible thing, took the flag down and gave it to the neighbor for safekeeping." 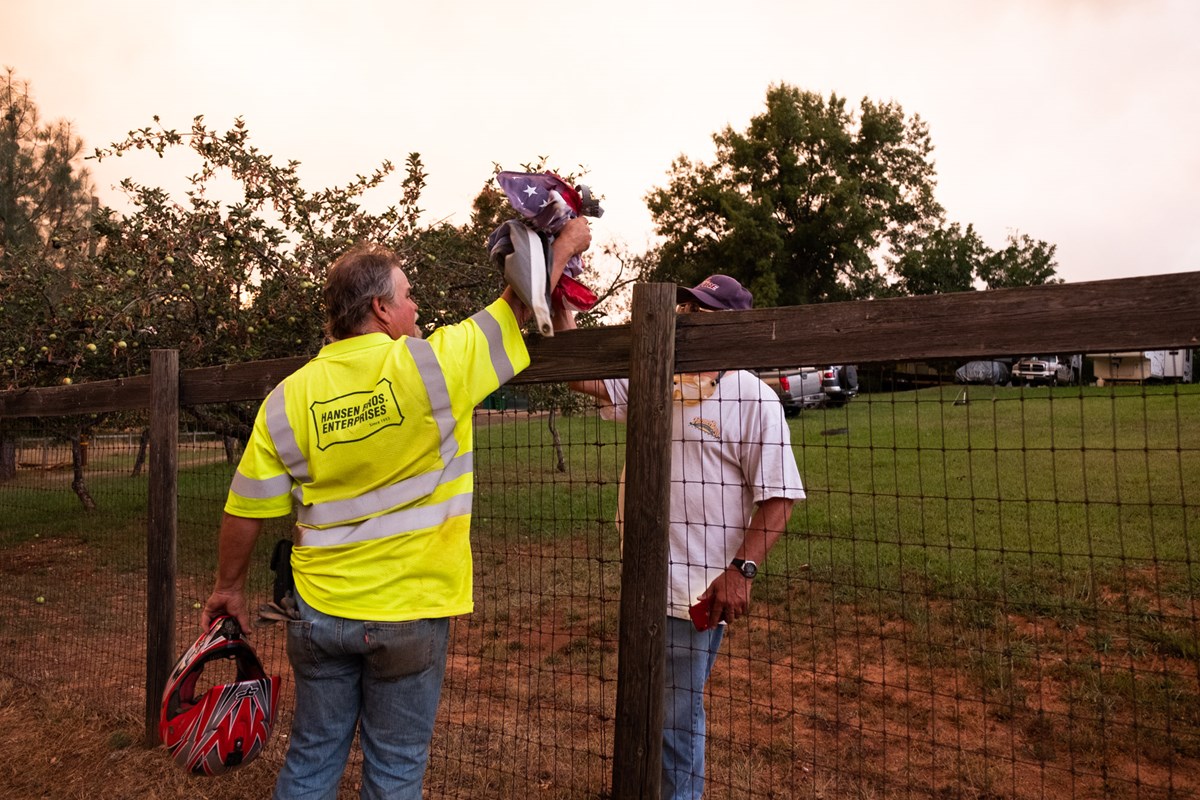 Dave Jefferis hands a flag he rescued from burning to his neighbor, Jim Marchio. Both stayed behind to defend their homes from the River Fire Wednesday, Aug. 4, 2021.Andrew Nixon / CapRadio

The Sacramento National Weather Service office has issued a “red flag warning” for the region through Thursday evening, with a forecast of winds and dry fire conditions, a warning from this morning.

Hudson with Cal Fire said Thursday morning that the fire is currently burning north towards Rollins Lake. While he said that overnight fire activity subsided due to cooler temperatures and a less-significant wind reversal, he is concerned about today’s weather patterns.

“The key will be today, as winds start to surface in the early afternoon, being prepared for that by having a fire line established, which we’re currently working on, and having a contingency line out ahead of the fire,” he said.

Cal Fire has aerial firefighting units above the fire today and had water-dropping helicopters fly over the area as of yesterday and overnight, Hudson said.

Noam Aharon was out of town when his girlfriend texted him about their neighborhood evacuating. But his home in Deerwood Place, next to Bear River, is “clicks away” from the River Fire.

He saw a massive column of smoke up from the nearby canyon, visible as he started going down Woodbury Road.

“Honestly, I expected the worst — I expected my street to be already blocked,” he said. “But thank God it went from us, toward [the] north, but the helicopters will pick up water like...two minutes walking from my house.”

Aharon has lived in California for 13 years, but said up until 5 or 6 years ago, he didn’t see conditions in the area being as bad.

Last year, over 4 million acres — the most on record in the state — burned. This year’s wildfire season is shaping up to be just as severe, if not worse. The amount of acres burned from Jan. 1 to Aug. 4 this year is almost double what it was during the same time period last year, according to Cal Fire data.

“Living here, it’s like playing Bingo: When will my house be burned?” Aharon said. “I mean, knock on wood. I hope our house in our neighborhood is okay, but it hit us as a town, as a community.” 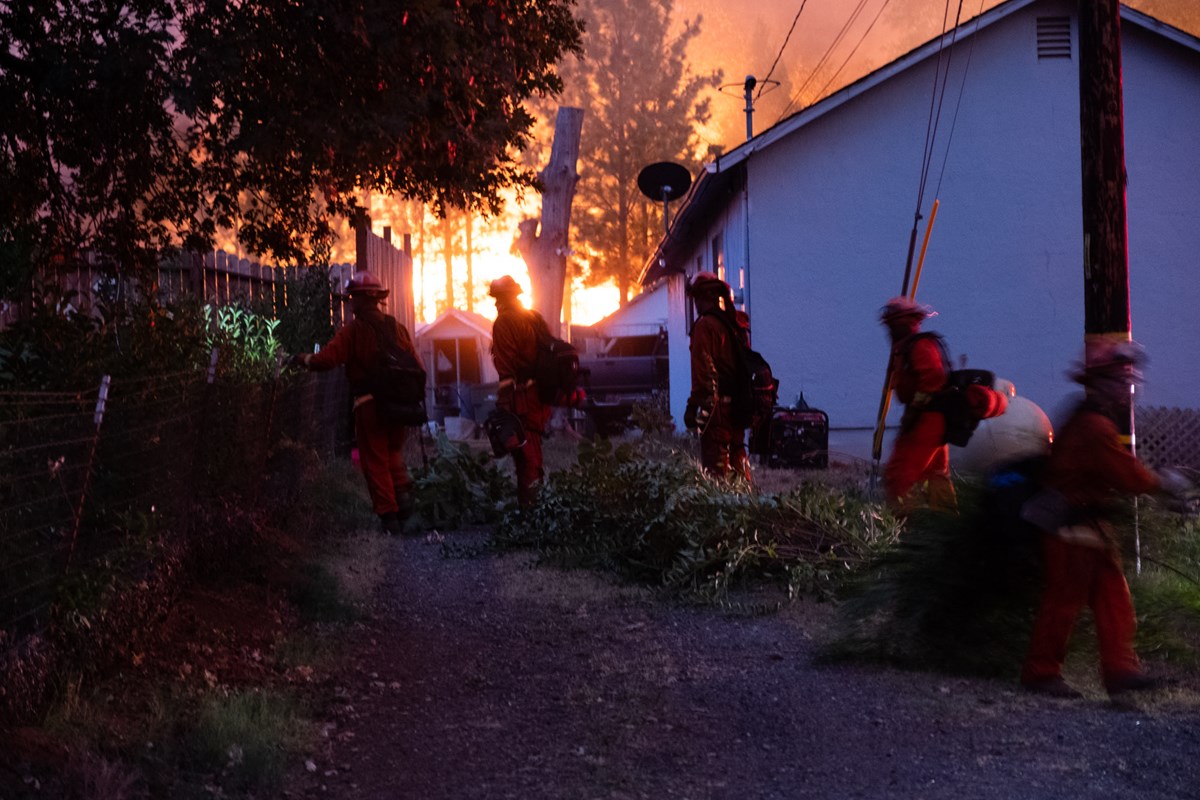 Earlier today, the Northern Sierra Air Quality Management District and the Nevada, Plumas and Sierra County Departments of Public Health issued a joint Air Quality Health Advisory as a result of the wildfires, with the poor air quality expected to last as long as the Dixie and River Fires are active.

Immunocompromised people, the elderly, children, pregnant women and those with asthma or weak lungs are particularly vulnerable to impaired lung function, coughing and chest pain.

Sacramento County residents are advised to stay indoors Friday due to air quality from smoke.

The Auburn Veterans Hall is no longer an operational temporary evacuation shelter, but the Heritage Inn, Hyatt Place, Holiday Inn Express & Suites and Home2 Suites by Hilton in Roseville have all confirmed vacancy to welcome River Fire evacuees.

This fire started August 4 at around 3:30 p.m. near Milk Ranch Road and Bear River Campground Road, north of Applegate. As of 3:03 p.m. August 5, evacuations are in place in Placer and Nevada counties, including the city of Colfax.

Where to Get Information:

Here’s where you can find the latest information on evacuations:

Sgt. Kevin Griffiths joined us at the command post to explain the current evacuations in Placer County, define what the different color zones represent, and why we are making some zones a mandatory evacuation and some are evacuation warnings. #RiverFire pic.twitter.com/8RBwsm2wGL

Scott Rodd contributed to this report