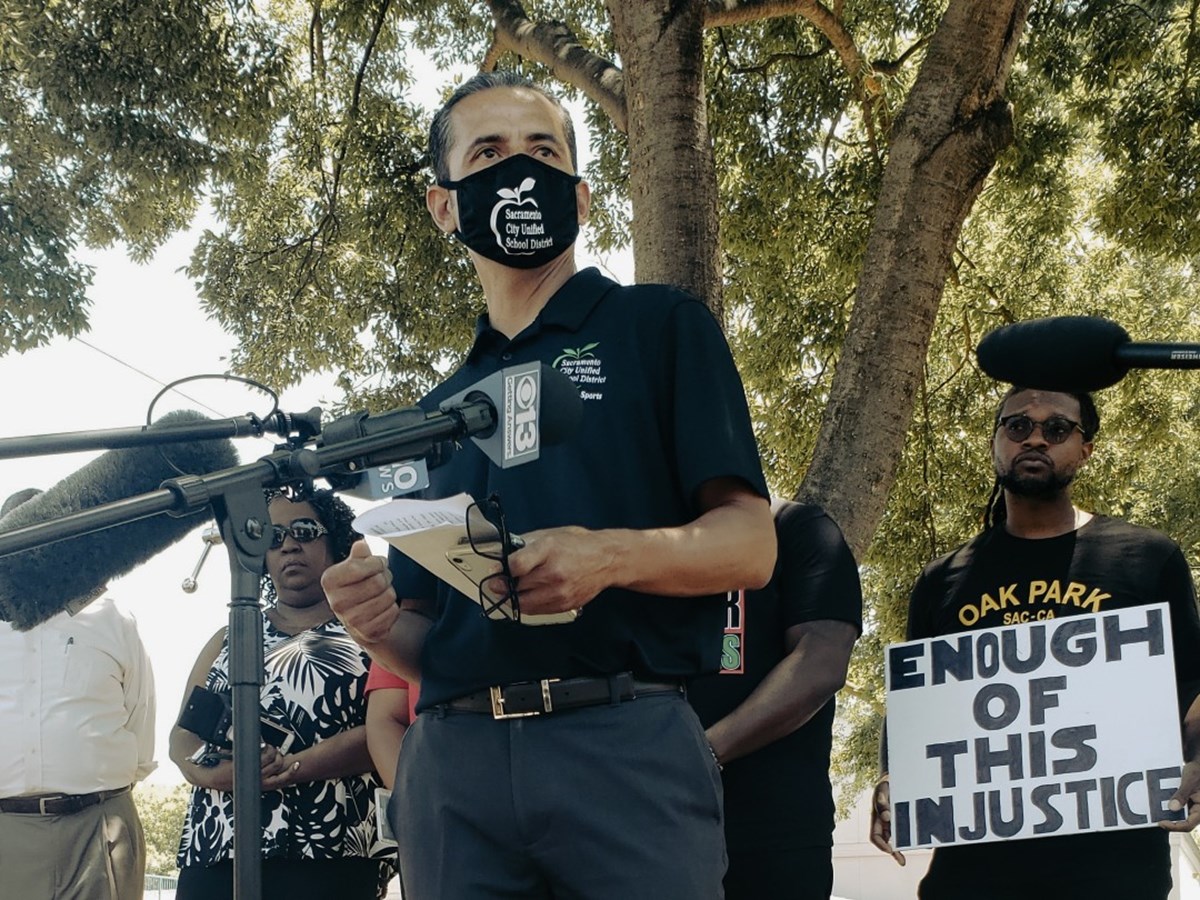 District Superintendent Jorge A. Aguliar attended the rally in a show of solidarity with family and community members.

“I know the F-word is something we hear constantly,” Sanders told her students during class in late June. “It used to be a nasty, ugly word. And now it’s like the word ‘n***er,’ which everybody says or ‘n***a,’ which is still a horrible, ugly word as well, and it’s not anymore somehow.”

One student shot back: “Who says that’s not a horrible word?”

In an audio recording of the conversation, Sanders is heard defending her use of the racial slurs, saying “where I live, I hear it all the time.”

The Spanish teacher has since been removed from working with students pending an investigation and is still employed by Sacramento City Unified School District.

In the weeks following, local organizers and students held a protest demanding SCUSD fire the teacher and implement mandatory on-going anti-racist training for all district employees. 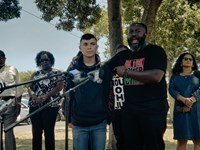 District superintendent Jorge A. Aguilar told the community as he stood on the drought-ridden grass at Kit Carson International during the protest that he stands with them in solidarity.

“This is intolerable. The buck stops with me,” Aguilar said. “Which is why I wanted to be here in person.”

But one question from organizers still lingers: In a district that has mandatory anti-bias training for teachers, how could this incident happen?

The answer is complex.

In 2014, the Sacramento City Unified School Board passed a policy that created a pathway to decrease the disproportionate number suspensions of students of color — and specifically Black children who were suspended more times than most districts in the state.

Part of that policy called for teachers to take part in “mandatory professional development” that included training on implicit bias, restorative practices and social and emotional learning, among other topics.

And while district officials say teachers are offered some training, others like Darryl White, Sr. Chair of the Black Parallel School Board (BPSB), are pushing for an on-going learning and unlearning process, so that incidents like the one at Kit Carson no longer happen.

“We have to change the way that people look at our kids,” White said at the early July protest. “Training has to be mandatory. It has to be elongated, it has to be in a long time frame because it has to be continuous. We are talking about people who are adults who have had 30, 40 years of training to be racist. It is going to take a lot of training to counteract that.”

The path to anti-racist training

Implementing on-going anti-racist training for SCUSD teachers and staff has been a long process that, like many school-related issues, has been filled with continuous back and forth between the district and teachers union.

In 2018, after a C.K. McClatchy High School student did a science fair project correlating a person’s race to their intelligence, the Sacramento City Teachers Association (SCTA) wrote a letter to superintendent Aguilar highlighting some of the obstacles to progress in mandatory training.

The letter reaffirmed the union’s opposition to the district's “top down centralized” anti-racist program, which “purported to establish restorative practice standards and to develop a more racially and culturally sensitive climate in the district.”

The SCTA went on to say that “despite countless hours establishing a progressive board policy and accompanying administrative regulations, the District approached the implementation of the administration regulations from a District-centered, rather than student/teacher/community oriented approach.”

So the union worked with BPSB to develop a different “bottom up” approach “providing the opportunity to create consensus among administrators, parents, students and educators.”

“While we do not view our restorative practices proposal as a panacea, we do view it as an entry point to begin a much-needed discussion in our district regarding implicit bias, cultural sensitivity and economic and social justice,” the SCTA’s letter read. “The foundation of any effort would be extensive professional development for all educators in the district.”

“Our district is providing mandatory anti-bias training for administrators, principals, cabinet and board members,” Gallegos wrote in an email. “Professional development includes; effective implementation of antiracism in the classroom and positive behavioral interventions, among other efforts at school sites. We are implementing a multi-tiered system of support — at this time being piloted at 25 sites throughout the district.”

But White with BPSB said those training sessions aren’t enough. He wants the district to implement a permanent program as well as create a separate anti-bias training division that includes “a trained crisis intervention team that can … determine not only the impact of the racial and cultural miscues but ascertain the teachers' learned knowledge, intention, and capacity for improvement.”

That division would also issue guidance on discipline.

“This kind of training can be difficult on white teachers who growing up experiencing the world and others through a lens of whiteness have extremely limited exposure to equity,” the BPSB wrote in a statement. “Too many find discussions of equity difficult especially when their historical myths are challenged with truths.”

Superintendent Aguilar expressed similar sentiments on the need for mandatory training, but has stopped short of agreeing with alternative proposals. However, he did commit to community members at the July protest to provide transparency and work with the African American School Board on the content of this summer’s proposed professional development for teachers.

“What we do has to go from the board to the classroom. Our board members are in the process of starting their own anti-racist training. Our senior leaders in the district are in the process. We have already started that training,” Aguilar said at the Kit Carson protest. “We expect and hope that our professional development before the start of the school year will also include anti-racist teaching and learning. I am working as hard as I can. It is a commitment that I am making. I am working with our labor partners to make sure that happens, so that we extend the working calendar by two days to make this mandatory. This training should not make anyone uncomfortable, if so, then so be it.”

For the upcoming 2021-2022 school year, the District says that it has offered two additional paid professional development days.

“Students go to school for 180 days per year. Our teachers work for 181, with that last day following the end of the school year,” Gallegos explained. “This means our district must negotiate additional professional development days with SCTA, and makes it very difficult to ‘add’ mandatory training [days].”

David Fisher, the president of the SCTA, said the union and the SCUD are set to meet in late July, where details of this year's training will have another chance to be hammered out.

For now, the back and forth continues, with organizers and the teachers union demanding one approach and the district wanting another.

Rashida Dunn-Nasir is a parent of three students at Martin Luther King Jr. School students; they are in the 7th, 5th, and 4th grades. She is also an active member of the BPSB and has sat on the district’s African American Advisory Board (AAAB) for almost a year.

Under a tree, after the protest at Kit Carson earlier this month as the sunlight dappled her pony-tailed afro, Dunn-Nasir said the Spanish teacher’s use of the n-word “speaks to the pathology of educators that hold that mindset.”

”Any marginalized group is at risk for falling into the school-to-prison pipeline when the people who are responsible for their education, spend time with them — eight hours a day — are so prejudiced in their thinking,” Dunn-Nasir said. “It is really disheartening. I feel very bad that the child had to experience that, and it makes me wonder how many more children have been victims.”

But racial incidents in the classroom go back decades, Dunn-Nasir explained. She recalled a teacher in the ‘90s telling her to “step and fetch it,” a phrase once used to refer to the work of a slave.

“The teacher who made that comment to me was given sensitivity training by Caucasiains, by people who looked just like her,” Dunn-Nasir said.

Community organizers have pressed the district to move with purpose, urgency and public transparency when dealing with the Spanish teacher. The AAAB put forth a number of demands for SCUSD, including district-wide zero tolerance policy with regard to racist rhetoric and hate speech.

Regardless of the district's actions going forward, Dunn-Nasir said that “an internal investigation is necessary, but the obvious conclusion is that she should lose her job. It's not enough to do sensitivity training because it is something that is rampant and has continued.”

She concluded: “If the district wants to take a stand, if they are serious, they will not just make an empty platitude. They will have a tangible result.”