One Year After George Floyd’s Murder, Black Organizers Reflect On Trauma, Justice And The Future 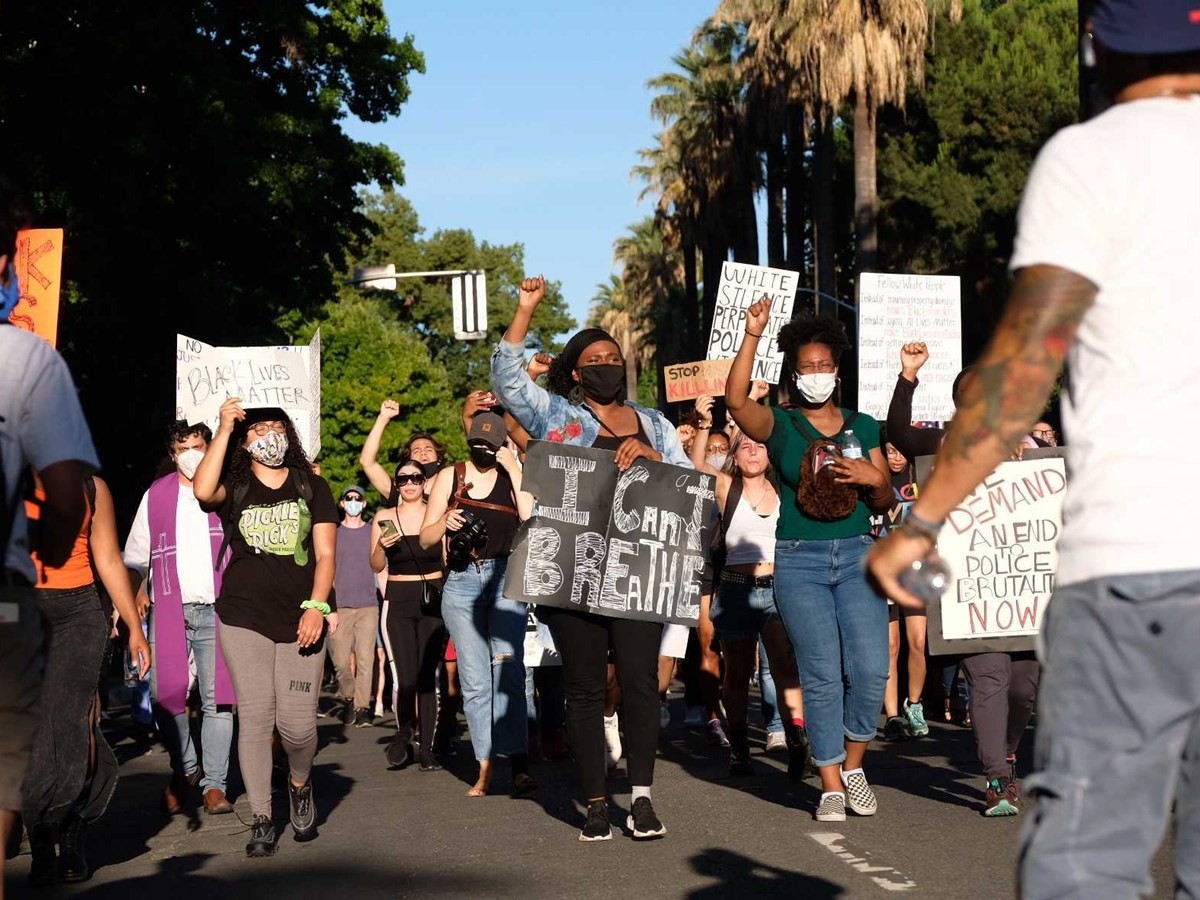 This week marked one year since George Floyd was murdered by a Minneapolis police officer. It was a death that sparked a social uprising so massive that it spanned the globe.

In Northern California, protests and demonstrations lasted for months — from thousands marching around the state Capitol to hundreds standing face-to-face with Sacramento cops in riot gear guarding the entrance to a police headquarters.

When they weren’t in the streets, some organizers led a movement to defund the police, which would shift millions of dollars of the city’s budget and redefine the idea of public safety. Instead of funding an institution centered around criminalization, money would be earmarked for preventative measures aimed at giving people the resources needed to not break the law.

But much of the world has since moved on: Former officer Derek Chauvin was convicted of murder in Floyd’s death; companies who posted black squares on Instagram and pledged money toward racial justice went silent; and cities bucked the idea of defunding the police, with some increasing department budgets instead.

For many Black Americans, the resulting trauma of seeing Floyd killed in that now infamous video still persists.

CapRadio spoke with several Black organizers from Sacramento and Vallejo about that trauma, as they reflect on George Floyd’s life and legacy, as well as what’s happened in their cities in the year since.

These interviews have been edited for clarity and brevity.

What were your initial thoughts and emotions the day you saw that video? 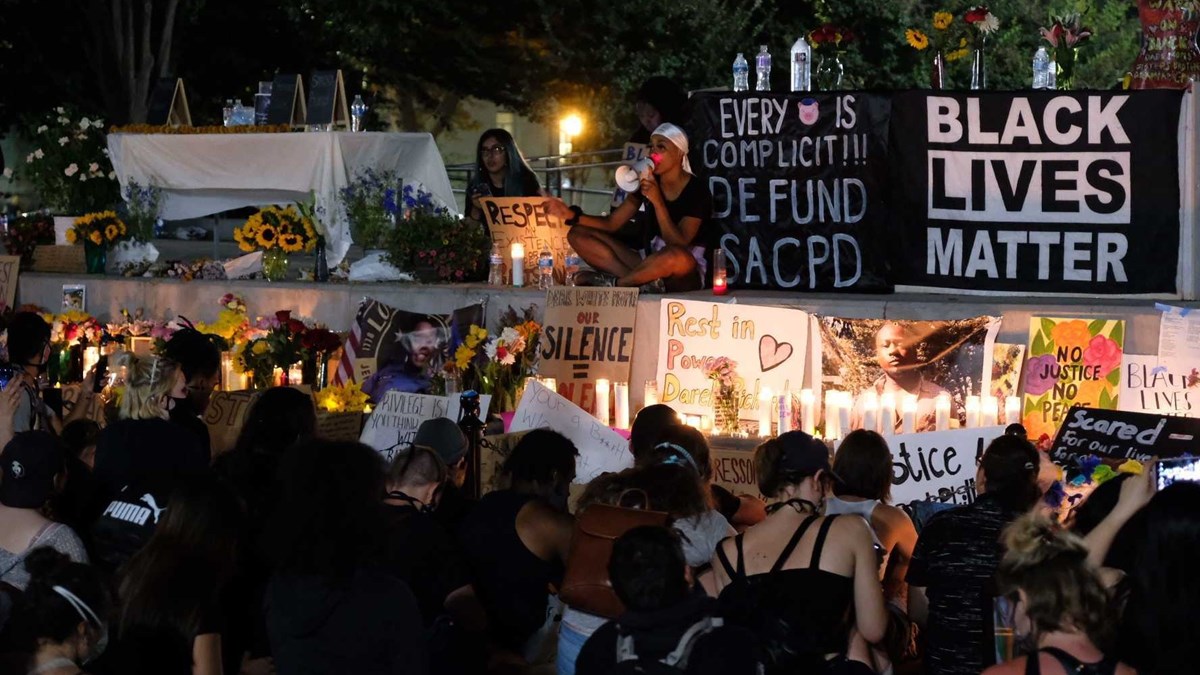 Demonstrators gathered in Cesar Chavez Plaza in downtown Sacramento on June 3, 2020 to protest the murder of George Floyd by Minneapolis police.Andrew Nixon / CapRadio

Ryan McClinton: It was crazy because the story dropped about the video, and I seen the headline come across my phone — my head drops immediately. I'm like, “come on, not again. How much back pain and trauma do we have to take?” And I think it was the very next day that I clicked the link, and as expected, it felt like my world came crashing down all over again.

Tanya Faison: My initial reaction, it was just really hard to watch. For any video where someone is being killed by law enforcement — if they're local or if they are across the country or if they're in another country — it's always you have to mentally prepare to see something like that. For me, at least, I have to. And so … it was worse than what I expected. Just the whole — the whole demeanor of the officer and the compliance of the other officers, it was just too much. It was too much.

What’s on your mind this week as you reflect on the one-year mark?

Louis Michael: We see all the strides we’ve made, but we still see multiple people have still lost their lives at the hands of police violence in America since George Floyd. And that’s just a reminder that this work isn’t done. As an organization, we believe that this work will never be done until we see a world that is free from policing and police … The accountability can only go so far. And we have to really begin to reimagine what our society can look like, reimagine policing, and continue applying that pressure until we see that nobody is being killed at their hand.

Kula Koenig: Maybe it's not a good thing, but I really numb myself and all I do is keep working and keep going because once I stop and acknowledge it, then I can't go back. Then I just start spiraling and then it takes a long time to get me back off to do the work that I need to do. And so I'd rather just not even go there. So maybe that's not the best way to cope with things, but I just — I can't afford to get into this like depression. Because if I do that, if I start to really think about it, then it just brings me into a place where it seems hopeless, and I don't want to do that because I have so much work to do.

In the days after George Floyd’s death, there were massive civil uprisings everywhere. How did those come about and do you think they were effective? 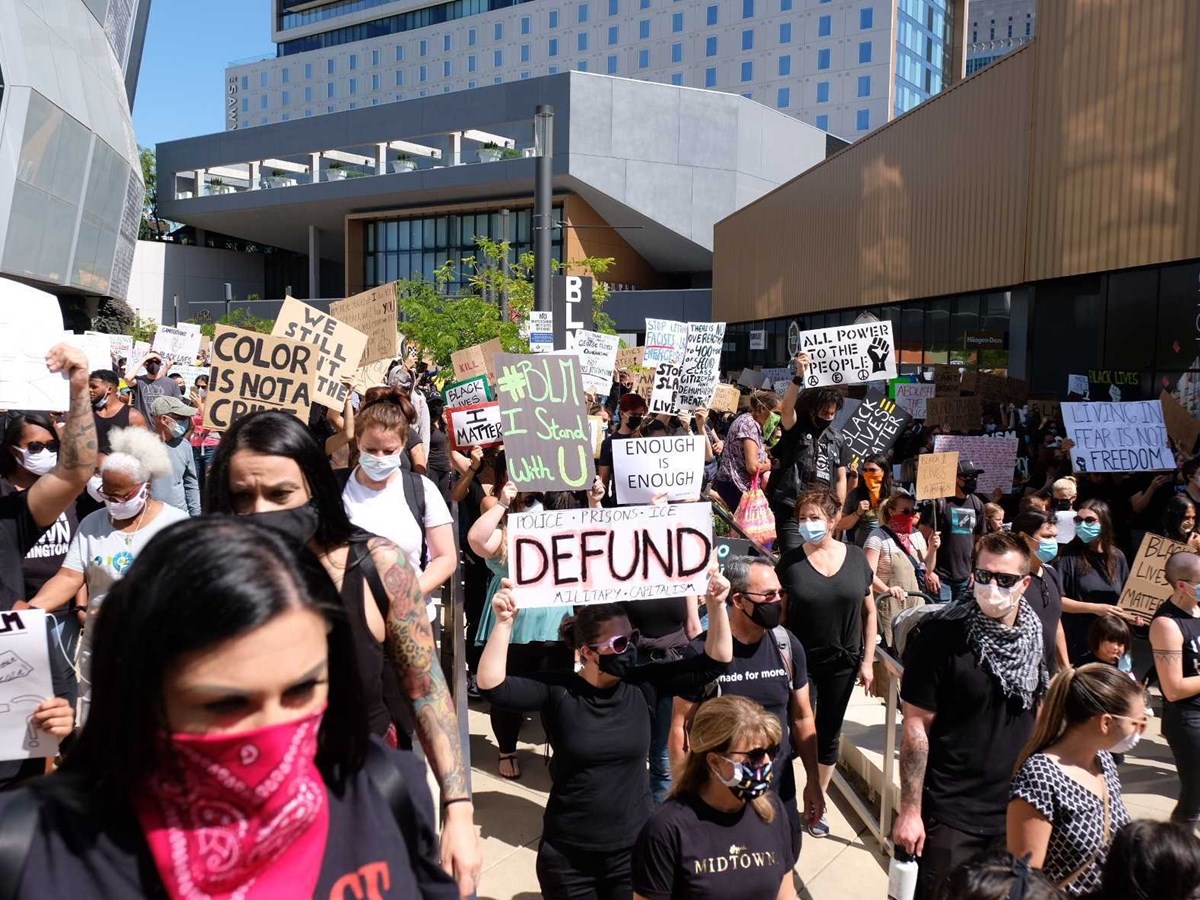 Crowds demanding justice for George Floyd and others killed under the hands of police, in downtown Sacramento.Andrew Nixon / CapRadio

McClinton: One of the things from an organizer’s standpoint that you think about when we have these actions is that you need to disrupt, you need to stop things being business as normal. That outrage you see in the streets is “I need you to stop and recognize that this is happening, that I'm in pain.” And because you don't recognize them, because these systems don't, we have to disrupt to call your attention to and organize enough to talk about this, the action that brings attention. But then what? … The systems that have led to oppression — government structures, criminal justice and law enforcement, you name it — have a role to play in righting the wrongs, but too often, that righting of the wrong is perceived as “We need to train officers to engage better, we need to build more trust. We need to build trust.” But we build trust by accountability. You build trust by trying a different way than the way that you've done for so long. Let's continue this by trying a different way.

Faison: I feel like we have a long way to go. We got to see a conviction. We've got to see what that looks like. But I mean, I think that's one conviction. I think it would be wrong for people to look at this and feel like change has happened because of that. We've got thousands of families of people that have been killed by law enforcement that have never seen any type of justice. We've got a lot of families here in Sacramento that have never seen any type of justice. We've got political officials that aren't even wanting to talk about seeing justice or they're just doing things that are performative. So, yeah, we have a really long way to go still.

Lyons: People are watching. People are more vigilant, not only on the streets, but also in these board meetings. So that's what I see, great participation. And with that participation, I'm starting to notice — and don't get me wrong, they're not listening to us completely — but I do see a shift in some of these lawmakers or these city council people, their thoughts. For example, mental health alternatives. We are just now seeing them shift away from it all being on the police. They are thinking of ways to have alternatives. But at the same time, they're not listening to the community members about how we're suggesting these shifts. So we’ve made grounds, but there's a lot of work to do.

Let’s talk about mental health, trauma and healing. What are those conversations like in your circle?

McClinton: We have our safe black spaces where we really identify and talk about what racial stress and trauma looks like right now and how does that show up. And we really educate part of the conversation of how racial trauma shows up and how trauma even lives in our bodies. How do we identify it and recognize the things that signal that to us, what are the ways that we combat that, but then also what are the things that we're doing to remedy and heal from this as much as possible? And the challenge about healing that we often talk about, we have to do the work. But it's really hard to heal anything when the wound is still being inflicted upon, when the wound is still being damaged. So when you talk about what racism and structural racism and systemic racism and white supremacy look like, those things still make it really hard to heal and move past the trauma like George Floyd, because it's being perpetuated in so many other ways that still make you question your safety, the value of your life, the way that your view and who will advocate for you when you’re seeing an injustice.

Going forward, what’s next — for you, for your organization, for your community? 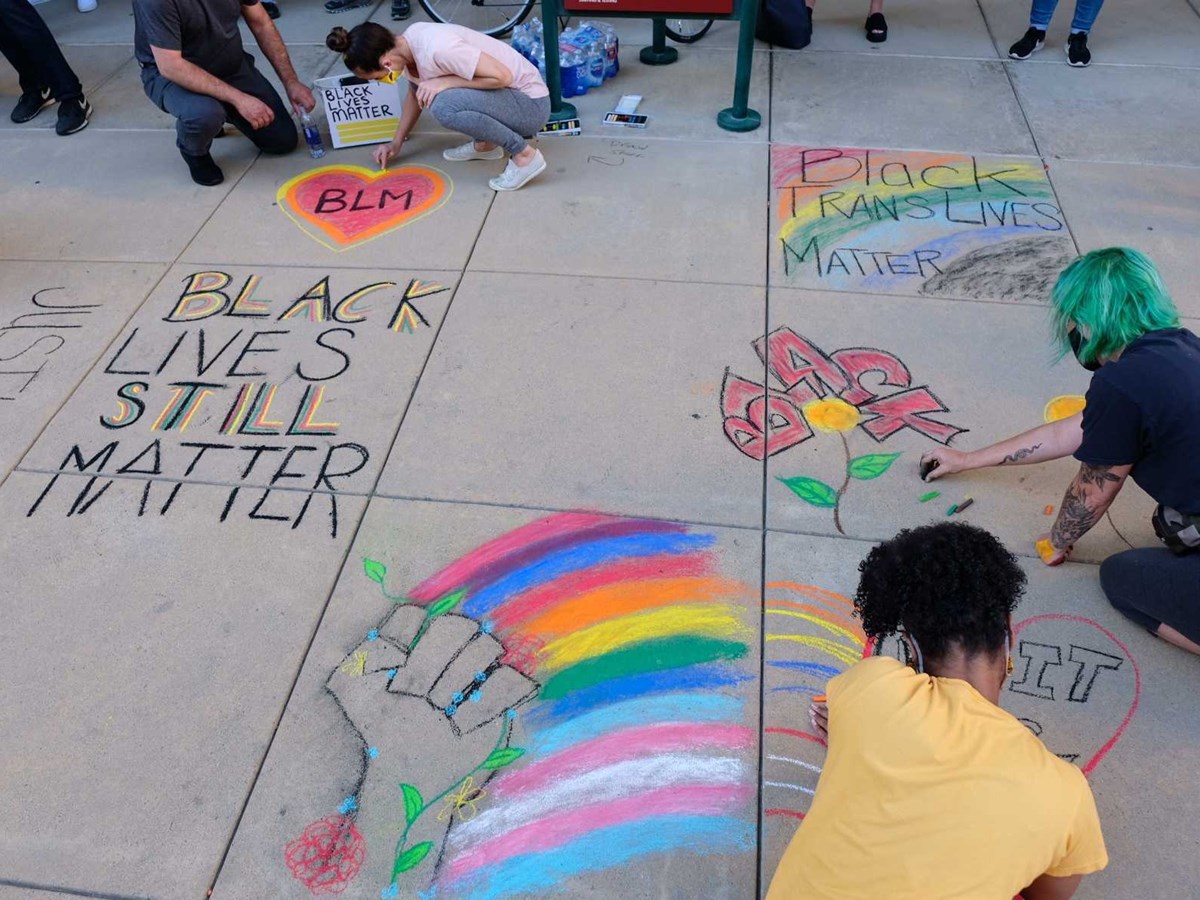 Michael: We continue to apply pressure on city officials and are just trying to hold people accountable while filling in the gaps where systems have failed people by providing resources and things like that. Our mutual aid team goes out every weekend on Saturdays and throughout the week, we collect items from people who donate or buy items. We have a small budget made up of donations from the community and we go out each week to places like Walmart to purchase the items folks are saying they need. We’ve built a pretty good relationship with a lot of the unhoused communities… We’ve been able to expand that over the last year — we started this nine months ago, and when we made that decision, we said that if we’re going to do this, we have to stay consistent and really dedicate ourselves to this work, because we don’t just want to show up and then people start depending us to come and then we stop showing up.

Faison: We did purchase some land, and we're in the process of trying to get a community house built on this land. And through this house, we're going to try to funnel resources from community to community. We need to have space to be able to give it to the people. And so that's our goal, is to get this space up, get these resources funneled into our community and hopefully get people what they need, so that they can do what they need to do to be prosperous for themselves and prosperous for their community, to make our communities stronger. And hopefully within that, there's going to be education and building. We just really want to build within the Black community in Sacramento.

Lyons: I really hope that we find transformative justice within our communities, so that we can push forward collaborating, because more hands work better in this type of pot. The government has laid a large bureaucracy of rules and regulations that we must follow to get through this door — to get this door open. We still want to tear down the same systematic injustice that are going around. We want to make sure that these reforms fit us and not fit the picture that policymakers are trying to have.