Sacramento Plans To Increase Spending On Police. Here’s How You Can Learn More About This Year’s Proposed City Budget. 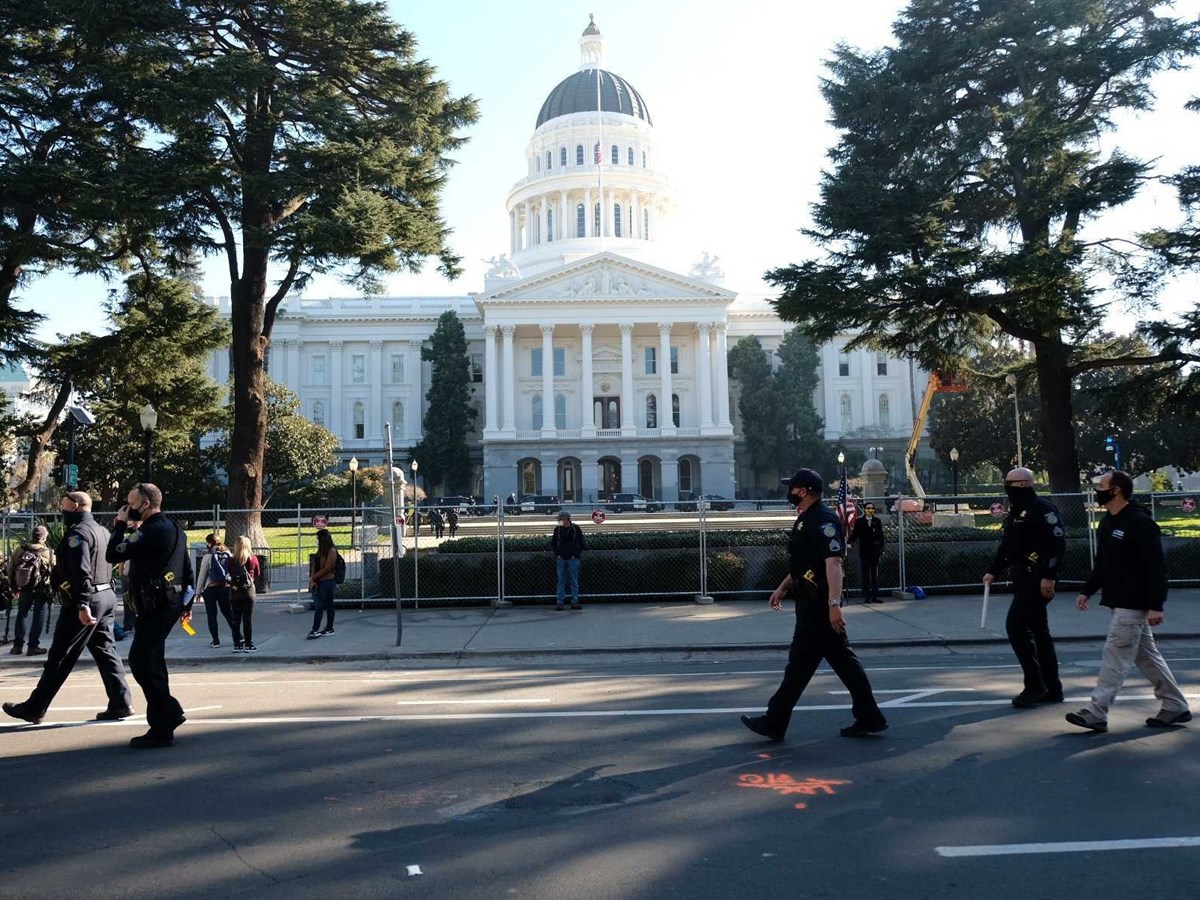 Police in front of the state Capitol ahead of anticipated pro-Trump rallies on Sunday, January 17, 2021.

The spending proposal signals that Sacramento has weathered the COVID-19 pandemic and any associated revenue shortfalls with very little cuts to city services.

“Though the full impact of the pandemic on the City, our businesses and our residents will not be known for some time, the City remains cautiously optimistic about an impending economic recovery,” Chan wrote.

But the proposed budget is already receiving pushback from those who want less police spending.

Chan’s proposal comes with a $10 million increase in the city’s police budget from last year, and an overall $30 million increase from the department’s spending two years ago. The Sacramento Police Department would have an operating budget of $165.8 million — an all-time high.

According to the report, this budget raise is mostly the result of five added police officer positions and 3.5% raises for officers, as negotiated by the Sacramento Police Officers Association.

Keyan Bliss with the Peoples’ Budget, a grassroots effort that came together after last summer’s racial justice protests following themurder of George Floyd and police killing of Breonna Taylor, said the city should not increase in police spending as the country reckons with police violence.

“We want to reject all talks of increases to Sac PD’s budget,” Bliss said. “In fact, we should be divesting from Sac PD’s budget to reallocate and reinvest in more community-based needs.”

The Peoples’ Budget wants the city to decrease police spending by $30 million, back to what it was two years ago. The group suggests using that $30 million to go toward the newly created Office of Community Response, as well as housing assistance and youth programs.

“The budget doesn’t really reflect the community’s needs as I understand them, or the policy priorities of the council,” Valenzuela said. “I think there’s a lot of room for improvement and community feedback to ensure this budget is setting us up for the best recovery possible.”

She wants more information about the department’s spending on overtime, police helicopter use in the past year and homelessness response.

The proposed budget is just that — an opening proposal. For those looking to get involved, City Council will hold three more public discussions on the budget. Here are the dates:

Here’s what else you need to know about Sacramento city’s proposed budget.

There are two things to note about the proposed budget’s law enforcement spending. The first of which — Sacramento Police Department receiving a record-setting $165.8 million budget —  is detailed above.

The second is connected to Measure U (see more on this below). The police department will also receive more than half of the $70 million from Measure U funds set aside for public safety. That money would be used for recruitment academies, training, and equipment such as body cameras and surveillance programs.

Spending from the city’s ‘Measure U’ sales tax

How Measure U funding is spent has been a hot topic since before voters approved the half-cent increase on the sales tax in 2018.

According to the city manager’s report, the sales tax is expected to generate $108.8 million in the next fiscal year. Under this proposed budget, about $70 million of that would go toward the police and fire departments.

The remaining $30.8 million would be split between youth programs, relocating the North Sacramento Library, on-going arts initiatives, homelessness and the newly created Office of Community Response.

It also includes $1 million for a participatory budget program, which would allow residents to have more involvement in how some of the city’s funds are spent.

Though Sacramento set aside millions of dollars of Measure U funding for youth services, its Youth Division sees a funding decrease in the proposed budget. The budget would allocate $7.8 million — a $2.7 million drop from last year.

The 2021-22 budget proposes an additional $21.8 million in Measure U funding to provide resources for youth programs, the North Sacramento Library relocation, gang intervention and violence prevention and city pools. As part of its midyear budget in February, $6 million from Measure U funding was allotted for youth services.

Of this funding, $2.5 million would be dedicated to the library relocation, with an additional $4.6 million going toward tutoring and other services at the North Sacramento Library. The city’s libraries remain fiscally challenged, which could pose issues for vulnerable youth for whom the library is the sole access point to the internet and educational services.

The budget further includes a $77,200 grant for Workforce Innovation and Opportunity Act/Youth that will support the Sacramento Employment and Training Agency and a $193,700 grant from the Department of Education that goes toward after-school programs for Sacramento City Unified School District middle schoolers.

Last July, the city council directed the city manager to develop alternative responses to non-criminal emergency calls. The goal was to shift some duties away from law enforcement, an effort currently under the Office of Community Response. The proposed city budget transfers the staff and budgets of this office to a separate department. That change would take effect on July 1.

Activists have previously expressed that building alternatives to 911 responses should start with diverting money to and consulting with community-based groups.. The Sacramento Anti Police-Terror Project runs one such alternative, M.H. First, a grassroots crisis response team that operates out of Oak Park. It’s open from 7 p.m. to 7 a.m., Friday through Sunday, and is reachable at 916-670-4062.

Through the end of last year, Sacramento County was collecting feedback on non-police responses to 911 calls through a survey and listening sessions. A $1.6 million proposal for a pilot program was brought to the Board of Supervisors in February but met with pushback from police officers.

Currently, city council members are presenting their plans to combat homelessness in Sacramento as part of the mayor’s Master Plan on Homelessness. Councilmember Valenzuela was the first to present her plan for District 4, having identified sites that could house up to 2,500 people not including motel vouchers or new affordable housing sites. The Council will vote on all plans in June.

Under the proposed budget, the Office of Homeless Services will be absorbed into the new Department of Community Response and receive $508,000.

The budget also allocates $6.6 million of Measure U funding toward various multi-year projects, including efforts to transition unhoused people out of homelessness and to fund respite centers for unhoused people experiencing a mental health crisis. The proposal also sets aside $400,000 for homeless encampment clean-up at drainage facilities.

The Council voted in March to put $3 million toward maintenance of overnight walk-in shelters for people, including unhoused residents, in crisis.