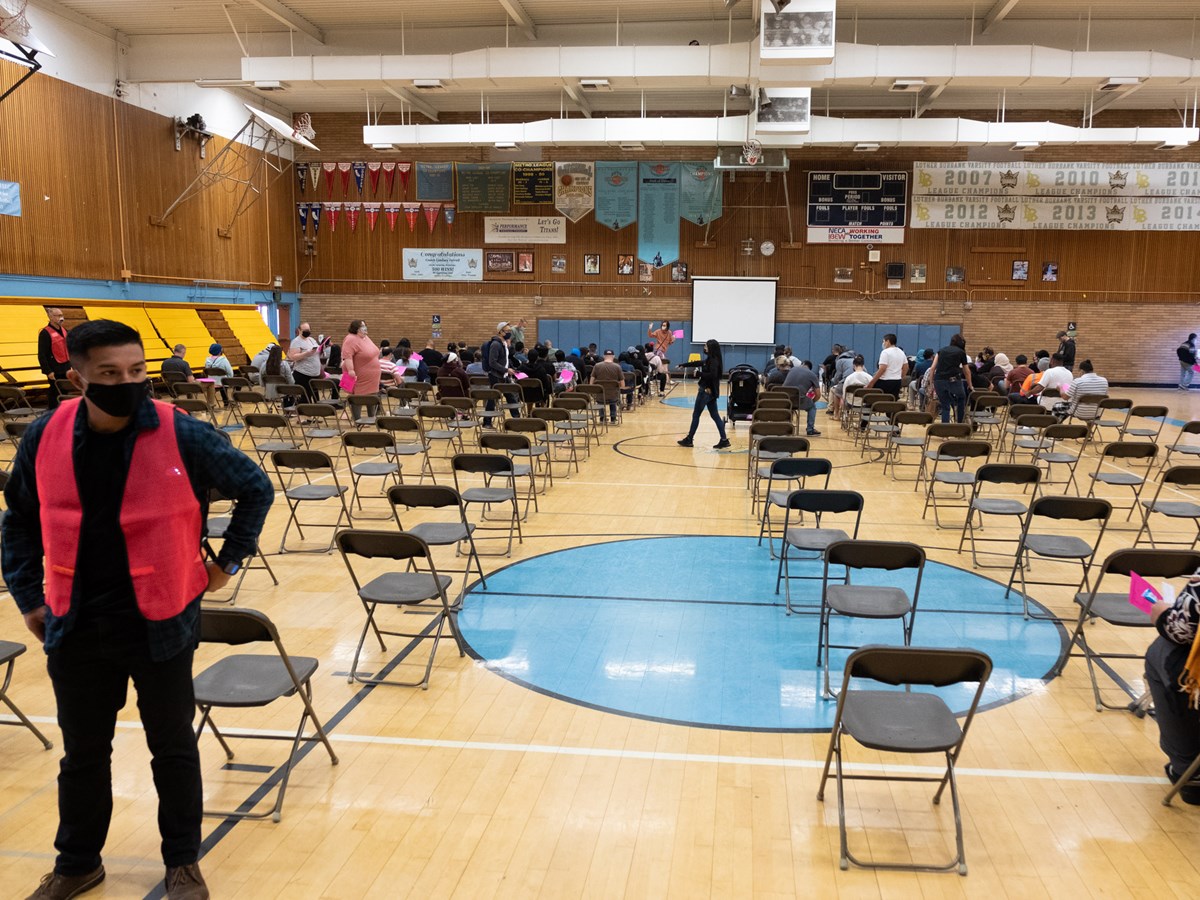 Updated April 16 to include new information on which counties have signed on to the state vaccine distribution network.

All Californians age 16 and up became eligible for a COVID-19 vaccine Thursday. The expansion comes amid a temporary discontinuation of the Johnson & Johnson vaccine, forcing county health departments to swiftly rearrange plans while still urging people to sign up for doses.

Whether you can actually get an appointment after becoming eligible depends heavily on where you live. California counties are all at different stages in their vaccination roll-outs, based on their population size and how much vaccine they received from the state. You can find more information on scheduling a vaccine appointment in California here.

The Status Of Claifornia's Vaccine Roll-Out

As of Friday, the state says all but two of California’s 58 counties have signed onto the statewide vaccine distribution network, now operated by insurance company Blue Shield of California. Blue Shield has been tasked with recruiting hospitals, clinics, pharmacies and home health providers into the network, and then working with the state to determine where to allocate doses.

The 400 providers and nearly 2,500 vaccination sites currently in the Blue Shield network will eventually be accessible through the state’s “My Turn” vaccination scheduling platform.

Many counties initially expressed hesitancy about signing on, arguing that they could handle the roll-out more efficiently on their own.

“My Turn makes it impossible for us to target high-risk groups, because we don’t get to control who signs up,” said Dr. Bela Matyas, health officer for Solano County. “That’s a problem.”

He says the state system also adds several steps of information-collecting after someone receives a dose of the vaccine, which slows down the process.

CapRadio has heard from listeners who say they can’t find appointments in their area after searching the site. The state says it revamped My Turn to make it easier to use in anticipation of a rush of sign-ups on April 15, including a function that allows counties to limit signups to certain zip codes. Twenty-one counties are still “onboarding” to My Turn and haven’t entered all their appointments yet, according to the state health department.

In Placer County, health officials are encouraging residents to sign up through the My Turn site. They opened up vaccine appointments to all residents on Monday, four days ahead of April 15.

Health department spokesperson Katie Combs-Prichard says they made the decision after they opened 3,800 appointments to people age 50 and over on Friday, and still had 2,000 appointments available by Monday.

“There's a lot more pharmacies that are offering vaccines now, there's a lot more different kinds of groups out there, and so my sense is that there's not quite the level of urgency,” she said. “Certainly we don't want to leave our appointments open, so we are trying to get those filled as quickly as we can.”

Many counties say they’re seeing hesitancy from people worried about the safety of the vaccines. California ordered providers to stop distributing the Johnson & Johnson vaccine this week after six people who got it reported blood clotting, including one woman who died.

“I guess time will tell how much resistance there is,” she said on CapRadio’s Insight. “Because for those who don't have the time or the will for a two-shot series, which we understand can be inconvenient, public health in general is depending on use of that single shot vaccination  … especially in a community such as ours, where it's largely rural, largely agricultural, we were really depending on that.”

Counties have scrambled to change their plans in light of the pause on Johnson & Johnson vaccines.

In Sacramento County, staff cancelled 800 appointments and directed those residents to sign up for a Pfizer or Moderna vaccine at a later date.

Rachel Allen, the county’s immunization coordinator, says they “shifted doses around” so that select pop-up clinics in underserved neighborhoods that were supposed to use Johnson & Johnson vaccines could continue as planned with Pfizer or Moderna.

But she says they’ll hold off on some upcoming clinics where the Johnson & Johnson would have been distributed.

In Solano County, Matyas says the county isn’t scheduling new clinics for next week because they “don’t have a good handle” on supply.

“Right now it’s really hard to get an appointment in Solano, for the immediate future,” he said. “We’re all sort of struggling with the same reality.”

But a shortage of the one-dose option could mean certain hard-to-reach populations need to wait even longer for a shot.

“I'm thinking here about homeless populations, said Richard Carpiano, a professor of public policy and sociology at UC Riverside. “So taking that out of the equation, that's a hindrance as well in terms of us meeting our coverage goals.”

Carpiano says the state’s distribution plan has been complex since the get-go, and will continue to challenge already-strained county health departments.

“There’s certainly been lots of fumbles on the way,” said. “In terms of effective roll-out, this is a really tricky tightrope that local agencies and local health care institutions are also having to deal with.”

Some counties opened up universal eligibility ahead of the statewide date. In Alpine County, home to 1,100 residents, the health department has given out 2,413 vaccine doses. They opened up vaccines to all on Feb. 24, and says they’ve relied on a phone line to get people registered.

He says they’ll have vaccinated all county residents in the next 4-6 weeks and “will not be receiving any further vaccine, since we have a sufficient supply to meet our goals.”

Johnson says they’re also vaccinating Alpine’s essential workers who live outside the county and “second home owners” from the Bay Area who are in the county temporarily. He says there is a “significant degree of hesitancy” among Native Americans, who make up about a fifth of the county’s residents.