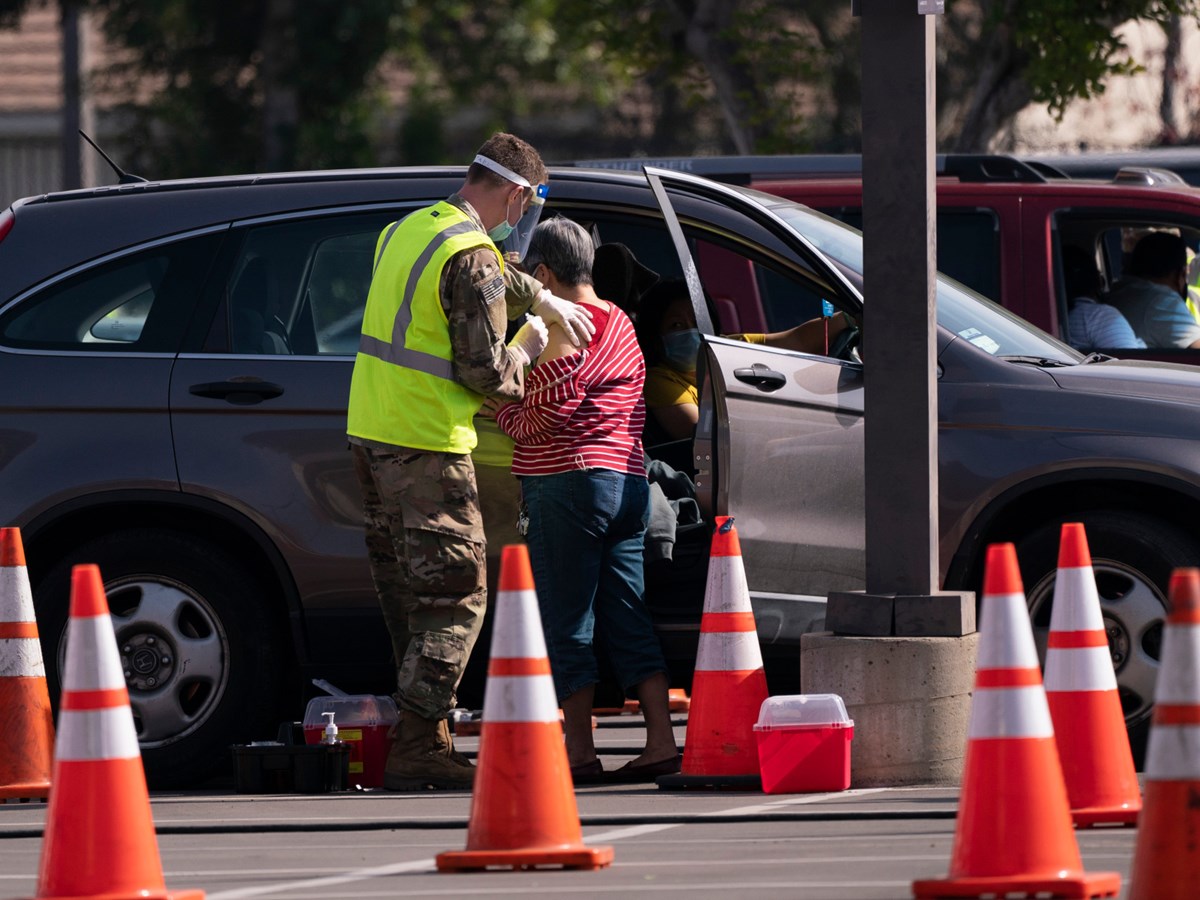 In this Feb. 16, 2021, file photo, a woman receives the COVID-19 vaccine at a joint state and federal mass vaccination site set up on the campus of California State University of Los Angeles, in Los Angeles.

As COVID-19 vaccinations ramp up around the nation and more adults become eligible to get the shot, the Federal Emergency Management Agency is slated to pull out of two of California’s mass vaccination sites, taking thousands of vaccines with it.

The reason? The state never asked the federal government to keep operating them, because FEMA could not commit the resources to run the sites longer than eight weeks, the federal agency told CapRadio on Wednesday.

FEMA currently supplies and administers as many as 7,500 doses per day each site — the Oakland Coliseum and California State University, Los Angeles. They were set up as pilot projects in February and were the first FEMA mass vaccination sites in the country.

But as the eight-week pilot winds down, the sites will soon begin administering the one-dose Johnson & Johnson vaccines before FEMA withdraws on April 11.

“The duration of this engagement was determined by the federal government through FEMA and the timeline has been widely known since before these two sites opened in February,” said Brian May, a spokesperson with the California Governor’s Office of Emergency Services (CalOES).

May added: “The conversations are about how we can best serve the communities going forward.”

The sites may still continue to administer vaccines if they’re run by local governments, but the doses would need to come from another supply, rather than provided by FEMA.

Darrel Ng, a spokesman for California’s vaccination campaign, said the state will soon see “a meaningful bump week-to-week” in its vaccine allocation. The governor’s office has said it expects to begin receiving 2.5 million doses per week in early April.

Blue Shield, a health company contracting with California on its vaccine distribution, said recently that the state has capacity to administer 4 million vaccines per week. And Gov. Gavin Newsom has frequently said limited supply of the vaccine is the only constraint.

Meanwhile, FEMA is opening new vaccine sites in states around the country as vaccine supply increases. In New Jersey, a 6,000-dose-per-day site opened Monday. In Boston, a convention center began administering around 7,000 vaccines a day on Wednesday.

But in California, FEMA’s withdrawal is scheduled to come just days before every adult becomes eligible to receive the vaccine on April 15.

FEMA spokesperson Robert Barker confirmed California officials did not submit a request to keep the sites running or to open new sites in other parts of the state. He added that they’ve had “no conversation to open up other sites in California.”

“With disaster response and recovery, the entire mission is always state-led and federally supported,” he said. “We’re here to support whatever the state needs. If the state requests support, we would of course have that conversation and try to meet whatever needs that they have.”

On Wednesday, FEMA walked that back. Spokesman David Passey said the agency can’t commit to supplying the two sites past April 11, though it has offered funding and staff for local governments to run.

“We recognize the state would love for us to continue maintaining that vaccine supply, in addition to the other resources,” Passey said. “At the same time, there are limits to the federal resources. There’s still a limited supply of vaccine and we don’t have an infinite number of staff to support vaccination centers around the country.”

Passey said FEMA’s vaccination sites in other states are also on the eight-week schedule and that other large states will get the same overall dose allocations for their sites.

Oakland Vice-Mayor Rebecca Kaplan said she was “very, very concerned” about the planned changes at the site and what it would mean for efforts to reach underserved communities.

Kaplan sits on the Coliseum Authority Board, which has been involved in the stadium’s vaccination efforts.

She worries that losing access to FEMA’s mobile clinics — which have been touted as a success in vaccinating hard-to-reach communities — could hurt lower-income and non-English speaking residents.

A spokesperson for Blue Shield said the state is in discussions about continuing to operate the mobile clinics.

Kaplan called on FEMA to continue to provide the clinics and extra doses.

“If you want to stop doing site management, that’s fine. But you can’t just stop providing the vaccine,” she said.

Kaplan and fellow councilmember Treva Reid had previously called for a number of fixes to address a rocky rollout to the Oakland Coliseum vaccination site, including issues with the state’s MyTurnscheduling website and non-eligible residents taking appointments intended for Black and Latino neighborhoods.

“Now that they’ve started barely to fix that, they’re going to shut it down,” Kaplan asked.

At the very least, Kaplan said state, local and federal officials should take more time to nail down an operating agreement. “Whatever transition they’re planning, they should have that worked out first,” she said.

Other community health advocates are concerned that the mobile clinics and other resources the sites use to target underserved communities would disappear when FEMA pulls out.

“It’s disappointing, especially with equity and the state’s equity goals,” said Monika Lee, a spokesperson with the California Pan-Ethnic Health Network. “Both of these sites were doing very well serving Black, Indigenous, Latinx communities of color.”

According to Alameda County’s vaccination dashboard, 22% of the county’s Latino population and 28% of its Black residents had received at least one vaccine dose, compared to 37% of white residents.

Native American and Pacific Islander populations had better vaccine access, though, with 44% and 40%, respectively, having received at least one dose.

Lee called the shift a “missed opportunity” because it will come as the state improves on meeting its equity goals and just before every adult becomes eligible to get the vaccine. Earlier this month, state health officials began allocating 40% of California’s vaccine supply to hard-hit communities and tied economic reopenings to meeting vaccination benchmarks in those areas.

The change came a month after the state released data showing racial and wealth disparities in California’s vaccine distribution.

“As we continue to open eligibility, the most underserved and the hardest hit will continue to face the same challenges that they’ve always faced,” Lee said, including internet and transportation access.

“Everybody else who has the time and the resources to sit and navigate MyTurn and other websites will basically get in line before all of these other people that we have tried really, really hard collectively to serve.”

State officials touted the success of the vaccination sites in recent news releases, pointing out the two sites have now administered 546,000 doses, two-thirds of which went to underserved communities and people of color.

Editor’s Note: This story has been updated to reflect new information provided by FEMA two days after its original publishing. It was previously updated to reflect Blue Shield’s involvement with California’s mobile vaccination clinics.