Parents Of Color Still Have Reservations About Returning Kids To Classrooms 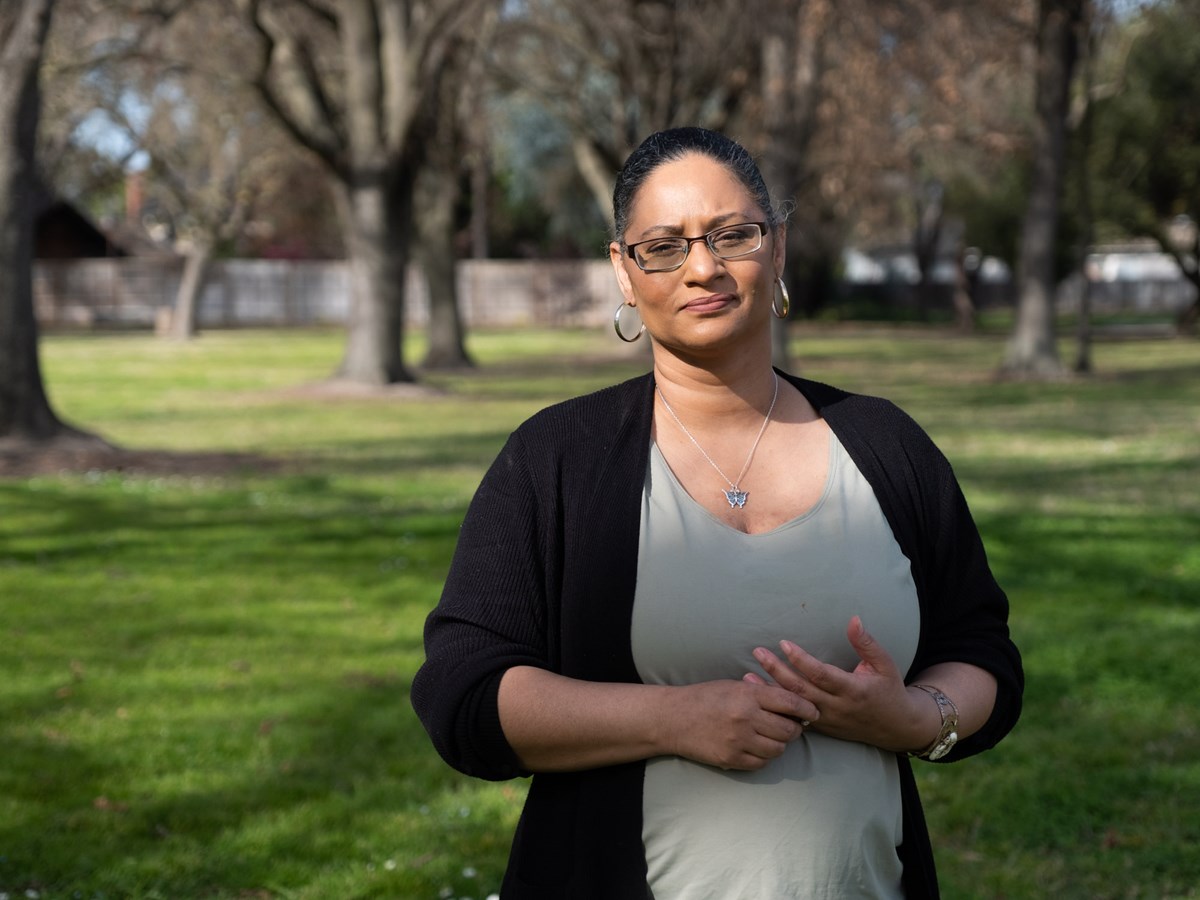 Pocket resident Toni Tinker is a mother of five.

Toni Tinker isn’t sure if she’ll send her second grader back to class when Sacramento City Unified School District reopens for younger students on April 8.

Tinker, like many parents of color across California, is concerned about students returning while counties are still in the most-restrictive purple tier. And even if Sacramento County were in the red tier, Tinker said she’s not satisfied with the safety plans the school district has put out far.

After nearly a year of distance learning, school districts around the state are ironing out plans to salvage the school year and bring students back to classrooms. In recent months, groups of parents across California — many of them middle- to upper-class white parents — have been pushing hard for schools to reopen sooner.

Earlier this week, Gov. Gavin Newsom and state lawmakers announced a deal to spend $2 billion on grants to entice school districts, if they haven’t already, to bring younger and vulnerable students — homeless, disabled and foster youth, those without internet access and English language learners — back to classrooms. The Legislature approved the deal Thursday.

At her home, Tinker’s family has stable internet and plenty of space to do remote work and school without distracting each other. But she knows that’s not the case for many other families.

She’s still debating whether to send her seventh-grade daughter — who she said has fared far worse in distance learning than her younger son — back to school when the time comes.

Tinker said she’s more confident older kids will follow safety measures, but other things would have to change; she wouldn’t let her older kids take public transportation to school anymore. Another choice, she acknowledges, not every parent has.

When faced with a virus that has disproportionately killed Black people, Tinker said being asked to even slightly increase the risk to her family’s safety “makes you feel [like] less of a person, [with] less control over your own children, your own self.”

“For parents of color — especially Black parents — they have a gamut of different fears on all this,” she said.

The plan approved by lawmakers Thursday would offer $2 billion in grants to districts that reopen schools this spring. It does not compel schools to offer in-person instruction and also includes $4.6 billion all districts can access to pay for summer school and other programs to address learning loss.

Vulnerable students in all grades — including homeless, disabled and foster youth, English language learners, those without internet access, and disengaged students — must also return to classrooms in order for schools to receive the funding.

Once in the red tier of the state's COVID-19 reopening system, counties must bring students through sixth grade back to classes to receive money. Districts that have already reopened can access the $2 billion to continue operating safely.

Some critics argue schools should be forced to reopen instead of given the option. But others say the incentivized plan would reward more well-off districts.

Hours after Newsom announced the plan on Monday, the teachers union representing the largest school district in the state blasted the measure as “a recipe for propagating structural racism.”

“This would send extra dollars to affluent areas that are able to reopen because of low infection rates, leaving students from low-income communities of color behind,” Ceclily Myart-Cruz, president of the United Teachers of Los Angeles, said in a video statement. “If this was a rich person’s disease, we would have seen a very different response.”

Tinker agreed and pointed to wealthier areas like Orange County, which had districts open for hybrid and in-person learning as early as last fall and collected millions in COVID-19 relief funds in order to do so.

Maria Osorio, a parent from South Central Los Angeles who has a child in high school, cited concerns about increased exposure when students return — and not just from inside the classroom.

“We have to remember that students don't just go to school on their own,” she said in Spanish through an interpreter. “They are taken to their schools by moms, dads, uncles — so we're going to be much worse off than before if we reopen the schools.”

Osorio, who spoke at a February press conference hosted by the California Teachers Association, said parents whose children are struggling with distance learning but are worried about sending them back “feel closed in and under this situation. Suddenly they say that they want us to return to school.”

Osorio said the pandemic has touched members of her family, and some of her friends have been intubated.

“Our communities are still the epicenter of this pandemic,” she said. “I don't understand how they can want [to reopen schools] given the challenges that we face.”

The coronavirus has ravaged communities of color around the state — nearly half of California’s 52,225 deaths are Latinos or Latinas. But some parents say their voices haven’t been heard when it comes to school reopenings, only the louder voices of white and wealthier parents.

White Americans are more likely to support an immediate return to classrooms, while wide majorities of Black, Hispanic and Asian Americans say teachers should be vaccinated first, according to a survey by the Pew Research Center.

The survey showed 80% of Black respondents said schools should wait to reopen until teachers who want the vaccine can get it, compared to 51% of white respondents. That divide also exists among economic lines. By a two-to-one margin, lower-income people would prefer teachers to be vaccinated while middle- and upper-income Americans are more closely divided. 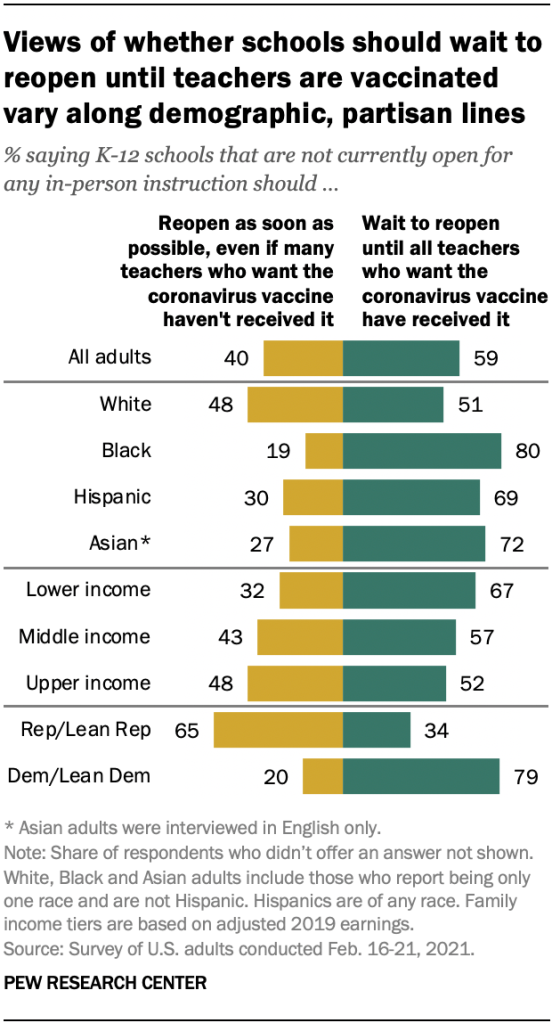 But even within communities of color, things are complicated and families often find themselves stuck between two less-than-ideal choices: continuing with distance learning or sending their kids to school and risking exposure to a virus that has ravaged their own communities.

“We’re finding our parents are really divided,” said Darryl White, who chairs the Black Parallel School Board. The organization advocates for African-American students in the Sacramento area and has an offshoot in Merced.

“Some parents want our kids back in school,” he said, noting many families lack access to childcare and reliable technology. And many parents he works with understand that long-term, in-person learning is best for children. “The issue is, is it safe?”

It’s a no-win situation, he said.

“I'm not trusting because I've had issues with districts before,” he said. “So I really can't trust that they'll do the right thing as it relates to our kids. But we need to get them back into school.”