Northern California was walloped at the end of January by the winter’s first big storm, which poured heavy rain and loads of snow across the region. That was great for the snowpack in the Sierra, which supplies around a third of California’s water needs.

The most recent survey showed the snowpack is 70% of normal for this time of year statewide, a big increase from the 52% a month ago.

But that storm was not nearly enough to get the state out of drought trouble, according to Sean de Guzman with the California Department of Water Resources.

“It looks like we're just going to continue to be chasing average conditions for the foreseeable future,” explained de Guzman, DWR’s Chief of Snow Surveys and Water Supply Forecasting.

The Sierra snow pack has increased quite a bit! On January 24th the #California snowpack was 38% of normal, but as of this morning it had risen to 70% of normal. #cawx pic.twitter.com/a8TiifLm0I

The big storm in the last week of January did do some good, dropping six to seven inches of snow in parts of the northern and central Sierra. The southern Sierra didn’t fare quite as well, according to Michelle Mead, a warning coordination meteorologist with the National Weather Service in Sacramento.

“While it was wonderful to see the precipitation, we need about four more of those just to get us back to average for this winter,” she said. “Up to last week, we've had a pretty minuscule winter.”

March and April snowpack surveys will give a more complete understanding of its condition. But while mountain areas may see snow in the coming days, Mead said that the weather pattern will be pushed north again and temperatures will rise into the 60s in parts of Northern California. That’s because of the La Niña, a significant weather pattern which often forms off of the Pacific Ocean and dictates California’s drier conditions in the winter.

“We are definitely unfortunately going to dry out,” she said. 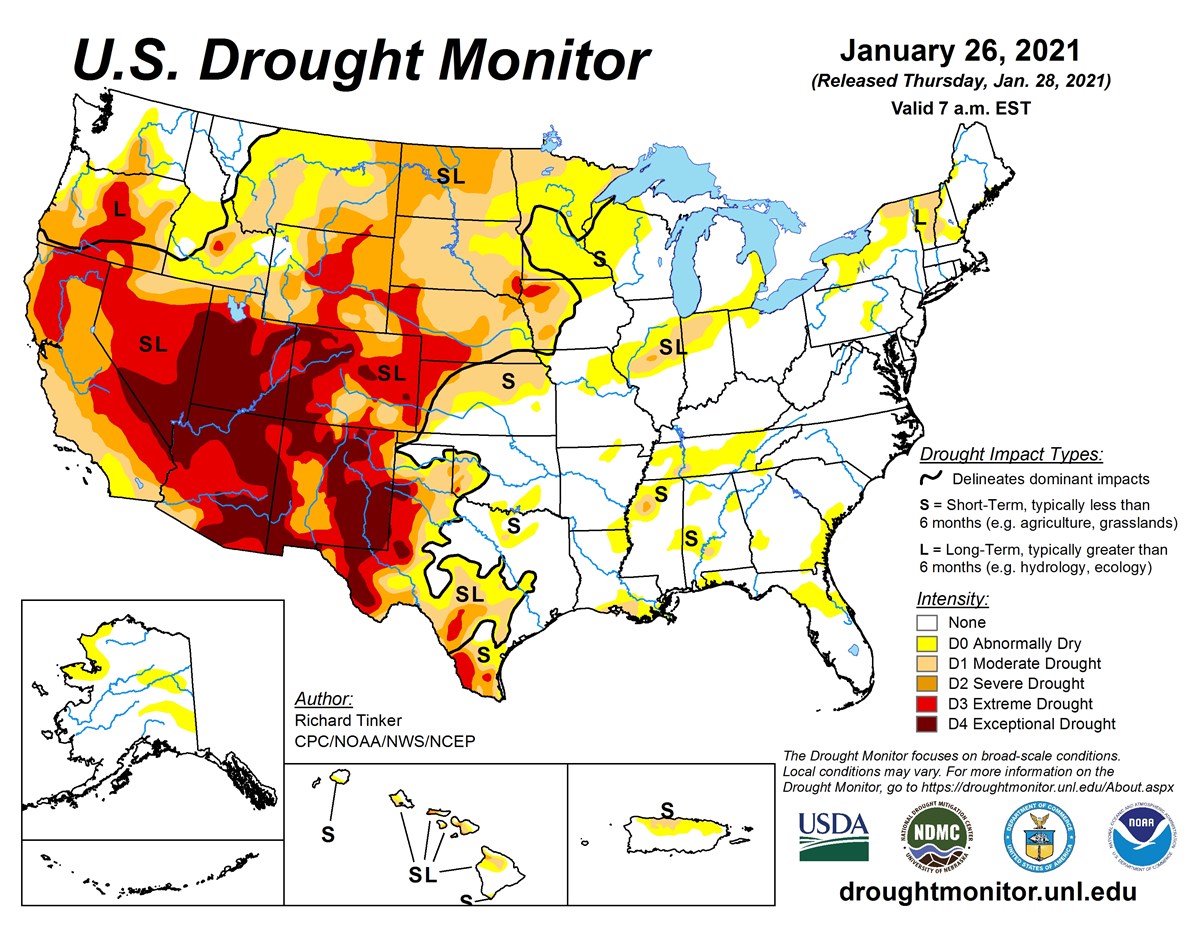 Despite the rain, parts of Northern California are experiencing their driest two years on record, and the state is joining a years-long regional drought, according to Daniel Swain, a climate scientist at the University of California, Los Angeles.

“The drought is still worse over Colorado, Arizona, New Mexico and Utah than it is in California,” he explained. “But it's a pretty broad and expanding drought right now across most of the West. In some cases, it's quite severe.”

Swain said the problem for California is that big storms are not on the horizon and temperatures are rising.

“The good news is, I think we've already gotten enough snow [and] water to sort of keep us out of the really dire, really low territory that we've seen in some recent years,” Swain said.

These thoughts from a few days ago still hold true. After a bit more precipitation today, high pressure will build over the NE Pacific once again. It probably won't be completely dry over the next 2-3 weeks, but it probably will be substantially drier than avg for Feb. #CAwx https://t.co/6jEwWdXKmG

But snowpack isn’t the only issue. Despite the last big atmospheric river, precipitation is below average in much of California. The main exception being parts of the Central Coast where the last big storm dropped as much as 10 to 15 inches of rain.

And California is still playing catchup from a dry 2020, Swain said, which was made evident by the record-setting fire season and the slow start of this year’s wet season.

“There's still a lot of water missing.” he said. “These recent storms helped quite a bit but have not fully dug us out of our hole even for this season.”

Researchers like Helen Dahlke plan around big storms like the one in late January. Dahlke studies how water moves around in California and sees large quantities of rainfall as an opportunity to manage the state’s water in another way.

In the wake of a big storm, rivers and streams fill up with more water than normal. Dahlke researches how to move that water into underground, naturally-occurring groundwater basins to  store for future use.

“It works a little bit like a bank account,” Dahlke explained. “We've taken a little bit too much money out in the last couple decades. And now we are trying to put a little bit of that — a little bit more money back into the account.”

Dahlke and a team of researchers last Friday had the chance to do just that when they flooded a 400-acre vineyard in southern Sacramento County. The atmospheric river had already dumped three inches of rain, but Dahlke wanted to capture even more of the huge downpour for underground storage. So she opened a floodgate in existing irrigation pipes and watched as the water rose, several feet deep.

We are flooding a 400 acre vineyard along the Cosumnes River today for groundwater recharge. Over 3 years of preparations finally coming to fruition! Thank you @CaWaterBoards for issuing the permit! pic.twitter.com/LjTxrbJ13n

“Everyone is hopeful that this will become a regular practice,” Dahlke said.

That kind of flooding is called groundwater recharge. For decades, California has been taking way more water out of the ground than what naturally seeps back in. Recharge is a way to move water underground into huge storage basins — and some say it will become a critical way to manage water in California as winters get warmer and snowpack diminishes. 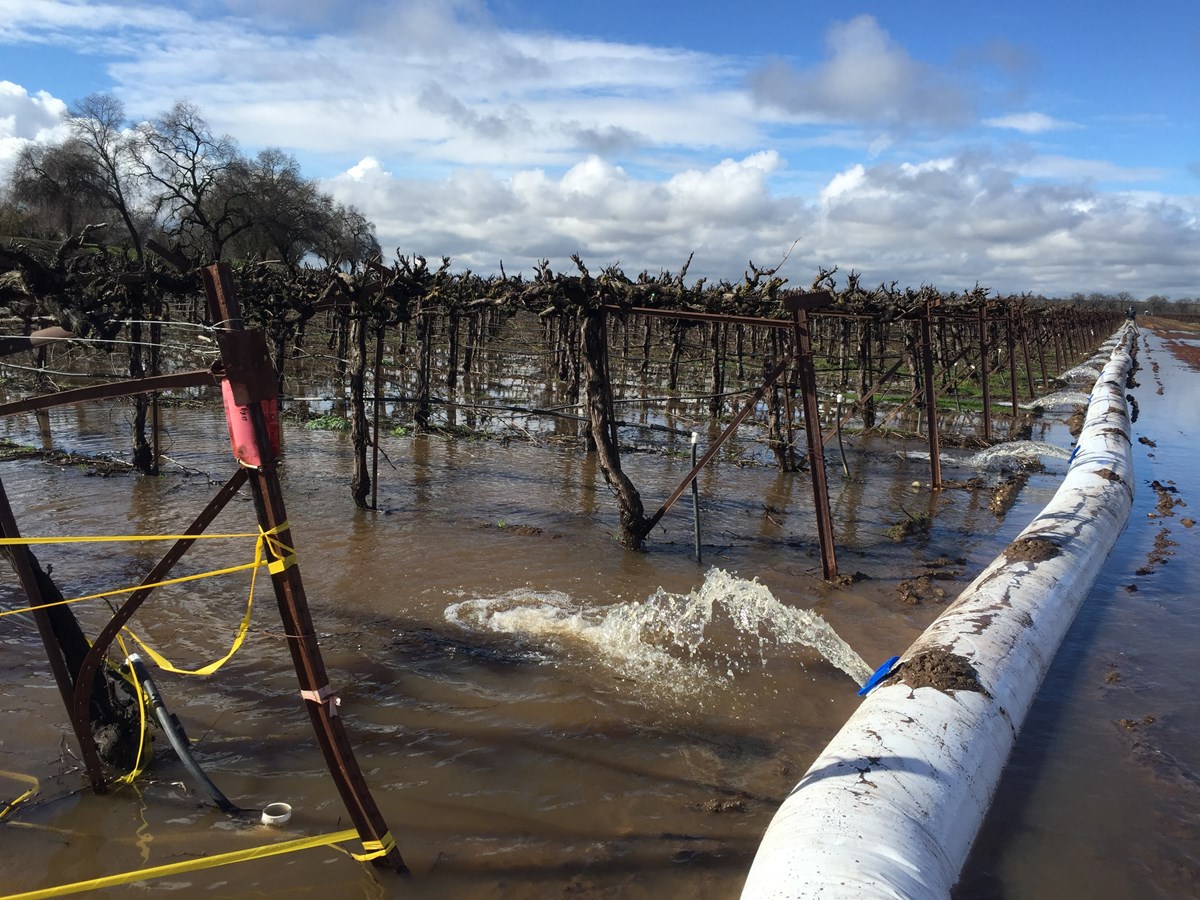 “That’s a really important hedge against drought, to have water available in our groundwater basins,” said Ellen Hanak, the director of the Water Policy Center at the Public Policy Institute of California.

Currently, California relies on snowpack for much of its water supply. As snow melts, the water flows downstream, and into the streams, rivers and canals that distribute water across the state.

But less snow means less water — unless landowners redirect some of the water that falls during big storms into underground storage.

“We can’t use our conventional way of managing resources and infrastructure, we have to rethink it,” said Newsha Ajami, the director of Urban Water Policy at Stanford University's Water in the West initiative.

But sticking to convention is desirable for some — even as California implements its first-ever law regulating groundwater use in the state. The 2014 legislation, called the Sustainable Groundwater Management Act, required areas of the state with the most serious groundwater problems to submit plans for how they would adopt more sustainable practices.

Many of the drafted plans fail to take into account the potential impacts on disadvantaged communities who already deal with a lack of access to safe and affordable drinking water. What impact groundwater recharge would have on water supply and quality in those communities remains to be seen.

“There's a lot of great research questions that people are working on,” said Natalie Stork, of the California State Water Resources Control Board’s groundwater management program. Careful monitoring will be necessary to fill the current data gaps, she said.

Still, permit applications for groundwater recharge projects have increased in recent years, according to the water board. Stork says some big water users — like farmers — could see recharge as a strategy to avoid using less water, which would balance out how much is used in California.

“Demand management is a big hot topic of conversation,” Stork said. “[It’s] what most basins are trying to avoid, so recharge is a big source of attention right now.”

For big, agricultural users in areas like the San Joaquin Valley, recharge looks like a strategy to keep using similar quantities of water, but retrieve it from a new source.

Last year, a study from the Public Policy Institute of California found that in the San Joaquin Valley, there is four times more demand for groundwater recharge projects than there is available water supply.

But the demand for water, even with recharge, far outpaces the supply.