State prosecutors in California will investigate all police shootings that result in the death of an unarmed civilian, under a new law that takes effect in 2021.

Fatal shootings by police are generally investigated by local prosecutors. Under Assembly Bill 1506, the responsibility will fall under the state Attorney General’s office, which will have to publish a public report on each investigation.

Assemblymember Kevin McCarty authored the legislation and says it will standardize investigations into police use of deadly force.

“There's an inherent conflict of interest in police policing themselves with regards to officer-involved shootings,” he said. The Sacramento Democrat added that the conflict extends to local district attorneys who would prosecute the cases. “They work hand-in-hand with local law enforcement to get elected to do their job.” 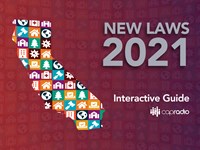 “AB 1506 bypasses local investigatory processes,” said the California State Sheriffs’ Association in its comments to the Legislature. "The Attorney General is not resourced or equipped to take on the duties contemplated by this bill.”

Attorney General Xavier Becerra estimates his office will handle roughly 40 investigations per year under the new law, requiring more than 50 new permanent positions at the Department of Justice. Becerra opposed an early version of the bill, citing constitutional and fiscal concerns, but voiced support when the current version landed on Gov. Gavin Newsom’s desk. The original language would have allowed local agencies to request state investigations into any police use-of-force incidents resulting in the death of a civilian.

In a September letter to the governor, Becerra said “there will be a need for future clarifying amendments” to the legislation, but did not elaborate.

The law also requires the Attorney General to establish a unit by 2023 that would review police departments’ use of force policies upon request from local law enforcement agencies.

The state Department of Justice provided this kind of feedback to the Sacramento Police Department after its independent investigation into the police shooting of Stephon Clark. The city of Sacramento expressed support for the legislation.

As the Legislature debated the bill, McCarty claimed there was only one independent investigation into a police shooting death since 2015. He argues state investigations would bring more scrutiny and transparency to these incidents.

But he also acknowledges there are limitations to the law. It requires a state budget appropriation, meaning the Attorney General may not take up cases until the middle of 2021, when the budget is finalized. Becerra estimates the program will cost $26 million to create, with $30 million in annual ongoing spending starting in 2023.

The California State Sheriffs’ Association argues there’s a lack of clarity regarding how much local agencies will have to pay toward the investigation, and at what point the state will pick up the tab.

Another limitation to the law: It only applies to shooting deaths, not other fatalities involving officers. Some of the most controversial killings of unarmed civilians in the U.S. in recent years did not involve officers firing a gun, including the cases of George Floyd and Eric Garner.

“I'm hopeful this starts a process where it's not just unarmed [civilians killed during] officer-involved shootings, but all fatalities at the hands of law enforcement,” he said.

McCarty added that he does not believe new legislation would be required to make these changes, and that it could be done through the budget process.