If California lawmakers set aside climate concerns like sea level rise, and focus only on the pandemic, the state could be setting itself up for an even worse economic hardship, the nonpartisan Legislative Analyst’s Office cautioned in a report Monday.

“It's quite tempting, justifiably, to just focus on those immediate concerns, but because we know this is looming on the horizon, we just want to ensure that the legislature and the public keeps an eye on this for the future,” said Rachel Ehlers, a principal fiscal and policy analyst with the LAO.

Sea level rise, baring other climate impacts like drought or wildfires, will most likely submerge between $8 and $10 billion in property by 2050, the report’s authors said. The rising seas, which could increase by as much as seven feet in just 80 years, will also mean the loss of thousands of jobs, 60% of the state’s iconic beaches and miles of rail and transit lines, the LAO warned.

All of this would have impacts on beach access, water treatment plants, roads and even airports.

Sea levels globally have risen about eight inches since 1880 and is predicted to worsen as the climate crisis grows, the National Oceanic and Atmospheric Administration reports. Also, the goal of the state’s Ocean Protection Council is to prepare for 3.5 feet of sea level rise by 2050.

The updated report suggests that local and state agencies can start preparing by doing things like “establishing relationships and forums for regional coordination, and sharing information—with relatively minor upfront investments.”

Preparing now is important because up to six feet of sea level rise could mean nearly two-thirds of Southern California beaches could be totally eroded in 80 years, the report suggests referring to research from the United States Geological Survey. That would impact 480,000 residents and cost upwards of $140 billion.

“When adding the potential impacts of a 100-year storm — a storm with a one-in-100 likelihood of occurring in a given year — these estimates increase to 600,000 people and over $150 billion of property value,” the report said.

That means that part of California’s identity as a beach-loving coastal playground could be lost or reshaped altogether.

"It's part of what you often hear described as being Californian,” said Christine Whitcraft, director of California State University, Long Beach's Environmental Science and Policy program. “Threats from sea level rise are important for economics, but they're also important for the intrinsic value they have to us as Californians."

Ehlers says it won't just be mansions falling into the ocean — sea level rise will play no favorites and will impact affluent and vulnerable populations.

But Ehlers says many things worsen sea level rise. Tides and storm surges are expected to cost coastal cities as much as $6 billion in additional property damage. This year, high tides and waves flooded parts of Newport Beach in early July.

Because rising sea levels will impact such a broad swath of people, the report authors note the state “cannot afford to indefinitely delay” preparation even during a pandemic.

She says knowing that oceans are supposed to rise by about a foot by 2030, and by more than seven feet by 2100, gives California time to prepare. But she says that means leaders have to take the topic seriously. 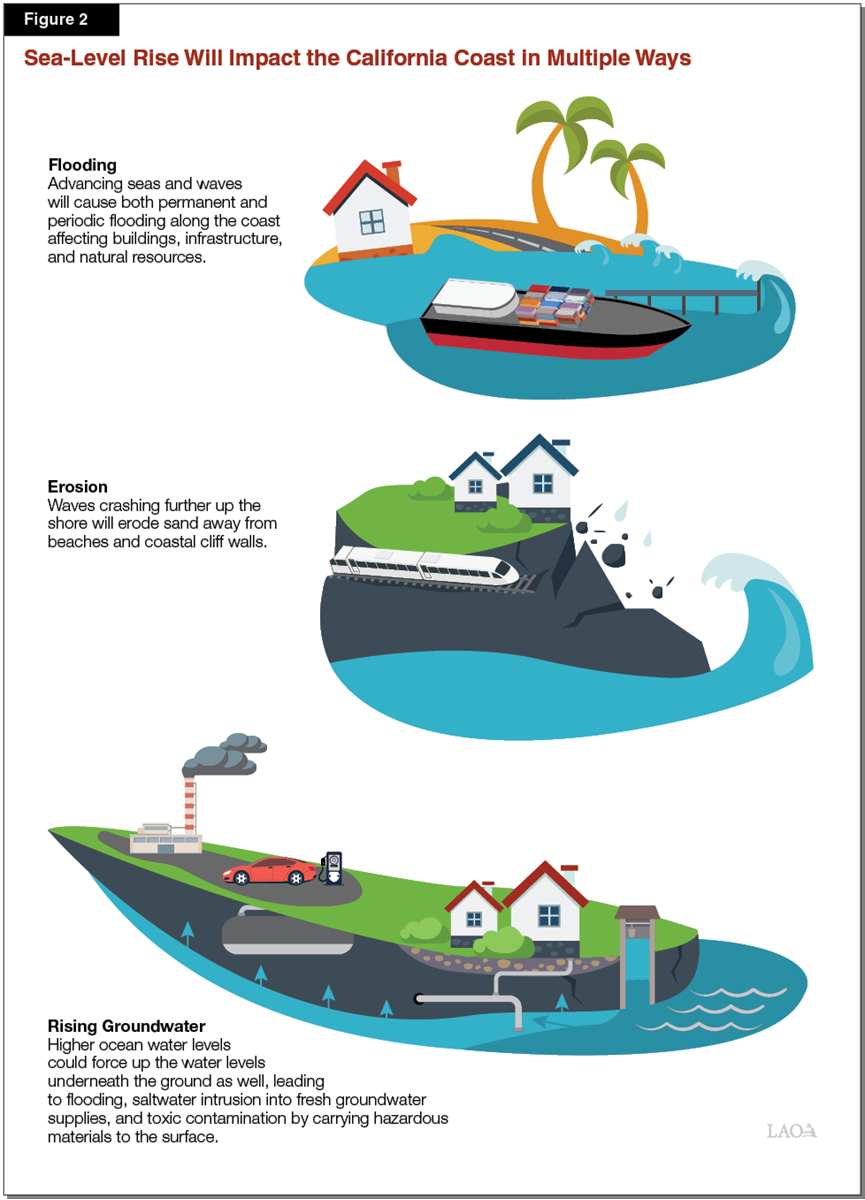 “We don't have all the certainty we wish we would have, but we have more than we do in some other cases,” she said. “That just gives us the opportunity to take the steps to begin to mitigate for some of those impacts.”

The new report doesn’t lay out recommendations like the December 2019 report did, because Ehlers says the goal is to educate leaders and the public about rising sea levels. She says the earlier report did result in interest and even some bills, but she says most of that was washed away as the pandemic’s tide got worse.

“This is the first step towards saying, ‘OK, then what are we going to do about it, and this is something we ought to care about,’” she said.