Nearly 200,000 people were evacuated when the spillways failed at Oroville Dam in 2017, an infrastructure disaster that cost around a billion dollars to repair.

Three years later scientists say events that partially led to the incident could become more frequent. It comes down to how and when snow and rain fall.

With Oroville, there was unusually deep snow in the Sierra Nevada, which was later melted  by a four-day warm wet storm known as an atmospheric river, according to Brian Henn, former researcher at the Center for Western Weather and Water Extremes at Scripps Oceanography.

“That's a long time to have sort of a plume of warm, moist air pointed at one particular area,” Henn said of the about 27 inches of rain the storm produced. “The amount of runoff into Lake Oroville was like the second highest in the last 30 years.”

All that rain falling on existing snow resulted in as much as 36 inches of water filling California’s second largest reservoir,straining its capacity, Henn says.

“Without the unusual warmth that caused extreme snowmelt from the atmospheric river, the inflows to Lake Oroville would have been less, and the situation around the spillway failures may have been less critical,” Henn said.

Henn co-authored a study that explores the links between these storms that act like fire hoses filled with warm water over the Feather River.

"We know that climate change is expected to increase the intensity of storm events in the Sierra Nevada, including extreme melt of deep mountain snowpack,” University of Colorado researcher and study co-author Keith Musselman said. “With our Oroville Dam case study, we highlight an example of potential threats to public safety and infrastructure associated with a warmer and more variable climate.”

What they found was that a four- to five-day storm in February of 2017 resulted in “basically the largest snow melt that's ever been recorded” at a couple of their sites.

The flooding that resulted, Henn says, could be a grim sign of what could come as the climate crisis worsens.

“There have been a number of computer simulation studies that basically show that atmospheric rivers under a warming climate become stronger and become warmer as you'd expect,” he said. “One striking thing is that this ... storm looked a lot like what climate change projections of future atmospheric rivers will look like.”

If more snow continues to fall as rain because of warming temperatures, Henn says, places like California may need to rethink how they store water because residents rely on the snowpack as a frozen reservoir that gradually melts as spring turns into summer.

“The warming may make it harder for California to kind of balance on that edge between beneficial storms and damaging storms [as] the extremes are getting more severe,” he noted.

This idea of a changing snowpack as a result of a warming climate is what a separate set of researchers are also studying. A team from UC Irvine analyzed global NASA data dating from 1980 to 2018 and found that much of the world has undergone or is presently in some sort of snow drought.

A snow drought is where there’s an abnormally low snowpack for that time of year. But that doesn’t mean there wasn’t precipitation.

It could mean, like in Oroville’s case, abnormally warm rain that melts away what was a big snowpack. (Read about Tahoe’s climate balance or listen to a podcast about snow droughts.)

What the UC Irvine team found is that snow droughts became longer and more severe in the Western United States, Europe, and also Eastern Russia since about the year 2000, said lead author Laurie Huning, a UCI post-doctoral scholar in civil & environmental engineering.

From about the Rocky Mountains west, Huning’s team found snow droughts have increased by 28%. She says this shift could alter when water is available to cities, farms and people that rely on it.

It could also have a big impact on increased wildfire activity and drought conditions, Huning said, which was seen during a snow drought in 2014-15 that fell during a longer drought in California.

“Because of the snow drought, as well as this longer, extended period of drought, the state experienced a total economic loss of about $2.7 billion and a loss in jobs of roughly 21,000,” she said.

But Huning says some of this harm could be mitigated if humans reduce emissions and find ways to sequester carbon, which warms the atmosphere.

“I don't want to draw too many conclusions about climate change or future projections, but looking at the past … you can see how important snow is to a region,” she said. “It has strong ties to socioeconomic conditions … Many regions are getting warmer, and so the likelihood of a snow drought may actually increase in many regions of the world.” 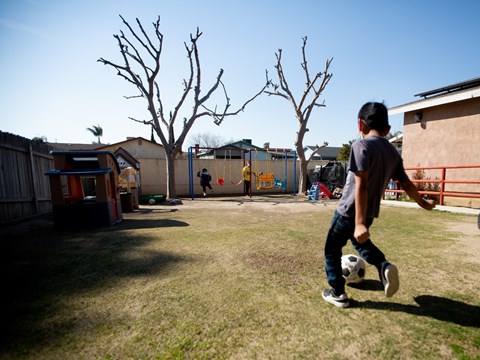 More Than 12,000 Coronavirus Cases Have Been Reported At California Child Care Centers