Should Ethnic Studies Be A Grad Requirement? Cal State Clashes With Lawmakers

BY MIKHAIL ZINSHTEYN AND OMAR RASHAD

In grade school, Napat Maneerit was uncomfortable bringing his mother’s food to school. As a Thai American living in the United States, he went by Nathan to avoid feeling embarrassed when others mispronounced his name.

Now a student at California State University Northridge, Maneerit has taken classes in Asian American Studies and Chicano/a Studies, branches of ethnic studies that he says have benefited him.

“I shouldn’t be afraid of the name my mom gave me, I should embrace it,” Maneerit said. “A lot of immigrants and minorities are disenfranchised because they don’t have a lot to attach themselves to, so having ethnic studies courses, you really start to learn there’s a reason you’re feeling this way.”

When the leadership of CSU, the nation’s largest public university system, meets next week, they’ll have stories like Maneerit’s in mind when they decide on the first change to the system’s general education requirements in 40 years.

The Board of Trustees will vote on a proposal from CSU Chancellor Tim White that would require students to take either an ethnic studies course or a social justice course before they graduate. The requirement would go into effect in the 2023-24 school year.

White’s proposal is an alternative to a bill passed by the Assembly and Senate that would require students to take an ethnic studies class. Ethnic studies, an academic domain born out of college student uprisings in late 1960s San Francisco, has a focus on four traditionally oppressed racial and ethnic groups: African Americans, Asian Americans, Native Americans and Latinos, who together account for nearly two-thirds of the state’s population.

Both the Assembly and the Senate approved AB 1460, authored by San Diego Democrat Shirley Weber, putting it on a collision course with CSU’s own proposal. If signed by the governor, the law would supersede any decision taken by the CSU next week.

Should either pass, future CSU students will have to meet some form of an ethnic studies requirement before they graduate; what’s at stake is the form that requirement takes.

The CSU calls its plan a significant change and the denouement to more than a half-decade of research and debate over how to make the university’s graduation requirements more inclusive.

Critics of the CSU requirement say that not expressly requiring an ethnic studies course will make it less likely that students take those courses, thereby undermining decades of scholarship and research on the histories, contributions and oppressions of African Americans, Asian Americans, Native Americans and Latinos. The CSU proposal would allow not only ethnic studies courses to count but also courses related to Jews, women and LGBTQ people, among others.

Proponents of the CSU proposal say that it allows students more choices and maintains the system’s academic freedom: If signed into law, Weber’s bill would be the first time the Legislature dictated a CSU graduation requirement.

The CSU thinks its proposal is a better representation of its student diversity. “Our students are not one thing,” said Alison Wrynn, associate vice chancellor of academic programs, innovations, and faculty development at the CSU. “Students will be able to select a course that does intersect, perhaps with their racial identity, as well as their gender, their sexual orientation, their ability status, religion, etc.”

Supporters of the state bill feel that the CSU system has had ample time and opportunity to implement its own ethnic studies graduation requirement and that White’s proposal, which only came after Weber’s bill made progress in the Legislature, is too watered down.

Kenneth Monteiro coordinates the CSU Council on Ethnic Studies and is the former dean of San Francisco State’s College of Ethnic Studies. Both Monteiro and the council support Weber’s bill and disapprove of the CSU’s counterproposal, which Monteiro calls a “Trojan horse.”

It “ensures a student can still go kindergarten to a bachelor’s degree in the state system and never learn a thing about the intellectual traditions, cultural achievements or the liberation movements of people of color,” he said.

By allowing social justice classes as an option to complete an ethnic studies graduation requirement, the CSU proposal makes it less likely students will take ethnic studies classes, which was the point in the first place, Monteiro contends.

Meanwhile, Cal State leaders object to AB 1460 over its cost. The system’s Chancellor’s Office says Weber’s bill would cost an additional $16.5 million annually, most of that attributed to the faculty campuses would have to hire. Community colleges would have to shell out $4.5 million, the CSU says, to hire enough faculty in the ethnic studies disciplines so that students can transfer to the Cal State campuses.

By broadening an ethnic studies requirement to include courses in the social justice realm, the CSU argues its proposal would cost no more than an additional $4 million each year because the system already has many of those classes.

The Academic Senate of the CSU, which opposed Weber’s bill for its “legislative intrusion,” nonetheless in January issued a resolution to require an ethnic studies course as a graduation requirement. After system and campus feedback, the senate amended that resolution in March by welcoming other disciplines, such as in Jewish, Muslim, LGBTQ, women studies, as long as the requirement would “retain the core definition of ethnic studies.”

CSU campuses have their own diversity graduation requirements, but students can in at least some cases satisfy them without having to take an ethnic studies class.

Democratic State Sen. Holly Mitchell of Los Angeles noticed as much at last month’s Senate debate over the bill. “I was intrigued to see Chico State and their diversity requirements have a course entitled Health at Every Size: A Non-Diet Approach to Wellness,” said Mitchell, who’s Black. “So, when we talk about diversity versus ethnic studies, there’s a difference, there’s a fundamental difference.”

Raven Freebird, a recent graduate of Northridge who minored in American Indian Studies, said the different perspective provided by ethnic studies courses made her more empathetic and humble, but most of all, it helped her find purpose and motivation to stay in school and learn more about her Native American identity.

“Ethnic studies showed why it’s important for someone like me to go to college,” said Freebird, a citizen of White Earth Mississippi Band of Ojibwe’s Wolf Clan. “It was like imposter syndrome, I did not feel like I belonged, I feel like people didn’t understand me. Ethnic studies gave me tools so I could fit in more and kind of validated my feelings too.”

In February, Freebird joined the CSU faculty union in lobbying for Weber’s bill at the state Capitol along with fellow students.

Ja’Corey Bowens changed majors twice before landing on Africana Studies and English as a double major at San Francisco State. He took an ethnic studies class on the contributions and accomplishments of early African civilizations, which drew him into the major. Never before had he encountered a course with that level of focus and detail on African civilizations.

“That’s the biggest thing that has impacted me — having that sense of pride knowing that my people have done great things,” Bowens said. “Although we have persevered through struggle and we’re still struggling right now, we will still contribute these great things even when it seems like that might not be happening.”

The fight to keep ethnic studies alive is rooted in struggle.

Students led a nearly five-month uprising at San Francisco State between 1968 and 1969 calling for a more diverse curriculum. The action stopped classes and led to numerous clashes between students and police, in one instance leading to nearly 400 arrests. Then-Gov. Ronald Reagan said students and faculty who want to continue learning “should be protected at the point of a bayonet if necessary,” according to the San Francisco Chronicle.

The student strike ended after the university agreed to create what became the nation’s first college of ethnic studies. By 1970, the CSU had more than two dozen ethnic studies programs and departments across its campuses. More have been created since. 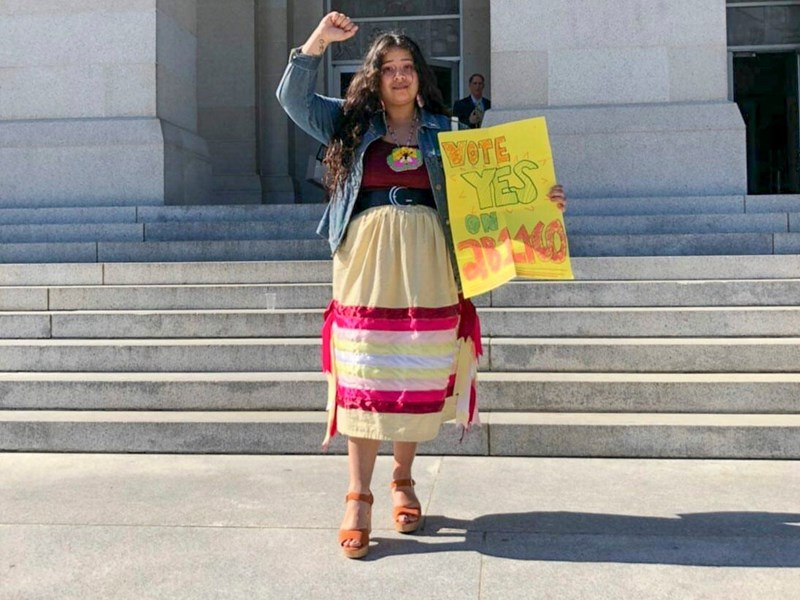 Raven Freebird, a recent graduate of of CSU Northridge, visits the Capitol to lobby for Weber’s bill.Photo courtesy of Raven Freebird

Since the task force report, the CSU points to progress in supporting ethnic studies, even if it hasn’t made it a graduation requirement. The system reported in 2019 that campuses hired 40 ethnic studies faculty in 2017 and 2018; by comparison, in 2015, just 15 faculty were hired.

“The tragedy is that, you know, after 50 years of developing a discipline, it has been shuffled aside for who knows what as a result of not believing that there is truly an academic foundation to ethnic studies, not respecting the scholars who have spent years researching and writing about ethnic studies,” said Assemblymember Weber. An ethnic studies requirement would also ensure those programs remain funded, she added.

Weber’s comments came in a May interview, just as the CSU was rolling out its own proposal. Weber herself was a professor of Africana Studies at San Diego State, helping to found the department, and at one point serving as president of the National Council for Black Studies.

To Napat Maneerit, the student at Northridge, an ethnic studies requirement at the CSU would allow students to feel more confident about their identity and culture.

“You learn from a different perspective that can’t be offered in any other class,” he said.