With Recreation, Some Camping Opening This Weekend, California Whitewater Rafting Companies Hope To Break Even This Year

But the California Department of Public Health says just because businesses are opening doesn’t mean the risk of COVID-19 is gone. The state advises people to limit outdoor activities to people you live with.

“It is important to remember guidance doesn't mean 'go,’” said Dr. Sonia Angell, State Public Health Officer and Director of the California Department of Public Health in a release. “Your local health officer will make the final decision about which sectors will open, guided by data specific to your community."

Still, the opportunity to open up for businesses shuttered for months is a move in the right direction, says Sarah Vardaro, vice president of River Runners along the American River east of Sacramento.

“We're starting pretty late and we're going at half capacity too. If I break even, I will be ecstatic,” said Matt Volpert, owner of Kern River Outfitters.

“It's really hard to work for that long and hard to really create a business that's thriving and then have it dissipate,” she said. “That is challenging to see.”

For local economies that rely on rafting, said WET River Trips co-owner Chad Richards, the closures are a hit. His company was able to secure a loan through the federal Paycheck Protection Program to help him make payroll and to keep afloat.

“The Coloma-Lotus Valley I’d venture to guess is 90%, if not more, based on the rafting and tourism industry,” he said. “Right now the area is dead as far as business .. it's simply taking a huge hit.”

The state released guidance last week allowing outdoor recreation to ramp up again with county approval as long as businesses practice social distancing and safety precautions like limiting the number of rafters.

“We're starting pretty late and we're going at half capacity too,” said Matt Volpert, owner of Kern River Outfitters. “If I break even, I will be ecstatic.”

Not all California rafting companies are reopening. Commercial rafting on the Kings River is canceled this season. Justin Butchert, president of Kings River Expeditions, says it’s because the snowpack is only 50% of normal, big groups have cancelled, and there are no dams controlling the flow of the river like other systems in the state.

“We would have been rafting for two months now,” Butchert said. “The Forest Service basically said you guys can’t open until further notice, that was a huge factor. Our big anchor weekend groups were canceling and we said we just can't do it … we just watched our business go away.”

Each company works with the county and the management agencies the river flows through. Logan Blower, co-owner of WET River Trips, said the company has the go-ahead to start rafting in El Dorado County, but is working with the state to access rivers in State Parks.

“I’m feeling a lot better,” said Blower. “They're interpreting our operations as being very low risk in terms of the spread to COVID.”

California State Parks spokesperson Adeline Yee says “the stay-at-home modifications do not mean that things are going back to normal.” She also says businesses, like whitewater rafting, need to work with the State Park district closest to them to go over reopening checklists and safety plans. But she says reopening may not happen everywhere — “only where compliance with state and local public health ordinances can be achieved.”

“It's really hard to work for that long and hard to really create a business that's thriving and then have it dissipate,”said Sarah Vardaro, vice president of River Runners.

WET River Trips and other rafting companies are taking reservations, hiring as many river guides as possible and implementing strict cleaning of equipment.

One of the biggest changes each company is making is reducing the number of trips, which can seem luxurious for the customer, but bad for the operator’s bottom line, says Jeremiah Copper, with Raft California operating on a dozen California rivers.

“It’s basically a private trip,” he said. “If we have three boats, we'll run three vans, even if traditionally that's normally only one van. That’s how people will be separated and kept safe.”

Most companies have changed their cancellation policies in an attempt to keep customers and are being flexible as reopenings take place.

“It took everyone by surprise,” said Evan Moore, general manager of Sierra South Mountain Sports on the Kern River. “We were coming off of our greatest year in our 36 year history. Coming off of a big snowpack year and a high water year for rafting that definitely helped and put us into a position that we're feeling okay. But obviously we're not bringing a ton of money in right now.”

Some rafting companies, like Six Rivers Rafting in Trinity County, have been open for a few weeks because COVID-19 cases were low there.

“We're guessing that we're going to be looking at about 30% of our normal through the door,” said Peter Harrison with the company. “I have six guides lined up to work with me at this point. I've got a couple on call, and I’m hoping I will need them.”

“We are averaging only one boat trip a week,” he said in an email. “Normally we would have four to six guides staying here at camp available for walk-in or short notice trips. However since we aren’t doing enough trips most have moved on looking for other work.” 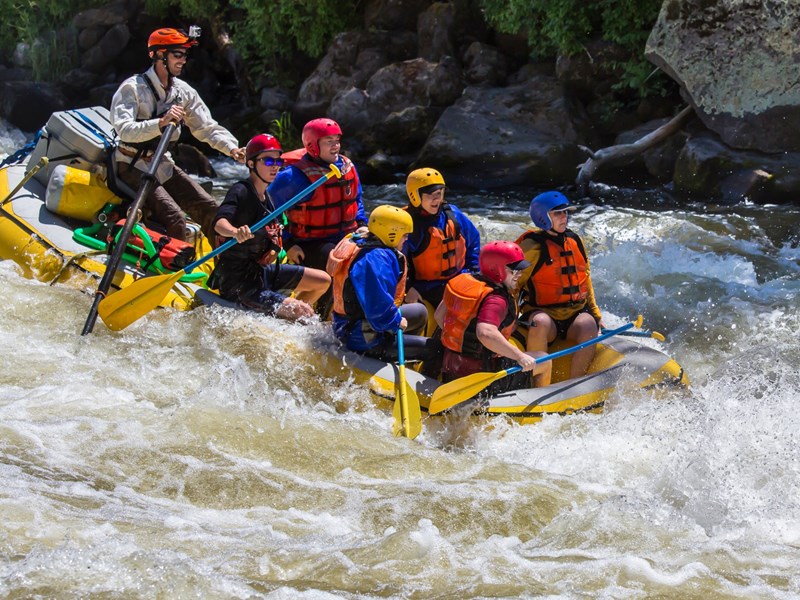 North of Trinity County in Ashland, Oregon rafting companies have operated for almost three weeks. Will Volpert, with Indigo Creek Outfitters, says his business is down 96%, but that his phone is ringing off the hook with potential rafters.

“Rafting is a big social activity where you've got lots of different groups from all over the place who are doing a unique activity that they don't do every day,” Volpert said. “We're only allowing one reservation per trip and so you lose that group component.”

He says the bigger deal is that other parts of the economy haven’t opened up and that limits who wants to come rafting. The biggest blow, he says, came when the Oregon Shakespeare Festival announced they will not be operating at all this year.

“Last year they sold 500,000 tickets,” he said. “That’s a huge blow to local tourism. A pretty good chunk of our business is folks who are visiting and their main thing is to see Shakespeare.”