Sacramento Mayor Darrell Steinberg met with neighbors and news media Sunday morning as he toured the damage left behind by last night’s protests against the police killing of George Floyd in Minneapolis. Derek Chauvin, a former Minneapolis police officer who held his knee on Floyd’s neck in a video that went viral, was charged with third-degree murder and manslaughter.

A grouo confronts @Mayor_Steinberg as he walks through vandalized parts of downtown Sacramento on Sunday.

Steinberg spoke with CapRadio's Beth Ruyak outside of City Hall before he inspected the damage.

“We’re waking up to a difficult scene,” Steinberg said. “I’ve been very vocal over the last 24 hours about two fundamental truths. The first point: the anguish is real and justified. To watch that video of the killing of George Flloyd is sickening. And I call for the prosecution of those police officers. They should be held accountable. The second fundamental truth is that the kind of destruction that we see in our city, and worse in other cities, is the opposite of righteous protest.”

He added: “There’s no excuse for the kind of crap that we saw in our city last night.” 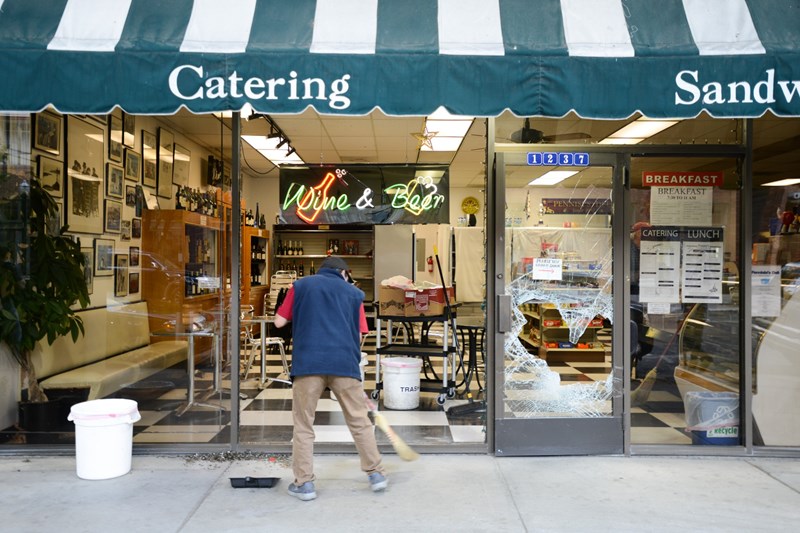 On the police response to the protests, Steinberg says he trusts their professional judgement.

“They were very conscious of avoiding anything that would lead to an even greater escalation of violence,” he said. “They were worried, and I think rightfully so, that if they moved in and attempted to make mass arrests, that the violence would have been worse and would have resulted in serious injury or death.”

Steinberg says he thinks more arrests will be possible because police may be able to identify more suspects from the video feeds.

“I hope there will be some arrests to send a message that peaceful non-violent resistance, anger and anguish is right,” said Steinberg. “Looting and destroying the property of people who had nothing to do with your rightful grievances is not right.”

He plans on discussing the next steps for more demonstrations with Gov. Gavin Newsom and Police Chief Daniel Hahn.

“I will recommend a course of action that is effective and will keep Sacramento safe," Steinberg said. "I don’t yet know if calling in the National Guard is necessary or appropriate.

"The same with the curfew question," he added. "It seems intuitive that we would establish a curfew. And yet I know in Oakland and other cities, they are not doing that, in part because that could have the opposite and unintended impact. Because the people bent on looting and destruction may come out in large numbers anyway and defy the curfew.”