“This is an unprecedented natural experiment,” said Dr. Meghan Thurlow, Vice President of Sensing Systems and Applied Science with Aclima, a private company that measures pollution.

“In some ways it's an opportunity … to recognize that we have a responsibility to prioritize reductions in air pollution and prioritize people who are experiencing sort of an unfair burden of air pollution,” said Thurlow.

This is particularly relevant right now, as highlighted by a Harvard study showing that higher mortality rates from COVID-19 correlate with exposure to air pollution.

“We've seen cases like West Oakland where this drop has been more dramatic than in other parts of the Bay Area and the state,” said Thurlow. “But the health impacts from decades of localized air pollution disparities last a lifetime and this is just a short reprieve.”

For Lelia Hawkins, a chemistry professor at Harvey Mudd College in Claremont, this is a moment to lean in to. She’s working from home and taking care of her son while her husband is working as a firefighter. But when her husband is home she’s working and he’s doing the household duties and teaching their son. Her usual daycare providers — the grandmothers — are off-limits right now as a safety precaution. All the while, she is still teaching college courses virtually and running her air quality lab.

“Keeping my instrument running and checking in on it feels both like the most important thing and the least important thing,” Hawkins explained. “I have a six year old. So we're doing kindergarten at home and trying to make sure that I'm not working so much that he's feeling extra depressed or neglected about being home without his friends.”

Hawkins’ lab uses a series of octopus-like tubes that allows her to gauge air quality through a hole in the roof. She uses a mass spectrometer to measure the amount — and type — of pollution every ten minutes. She can track the results on her home computer.

“I thought that the air would be extremely clean,” Hawkins said. “The air seems cleaner, but it's definitely not zero.”

She was surprised that her local readings didn’t match up to reports she heard in the media, but she says processing this data daily will prove fruitful once the stay-at-home order is lifted.

“The silver lining is not that we have good air quality now,” said Hawkins. “It's what scientists can learn from this information. I think having good air quality for a few days is nice, but it doesn't have long term health effects.”

But she noted that this period with cleaner air and the associated economic pain could help “people appreciate just how quickly our air could be cleaned up by changes that are less oppressive.” 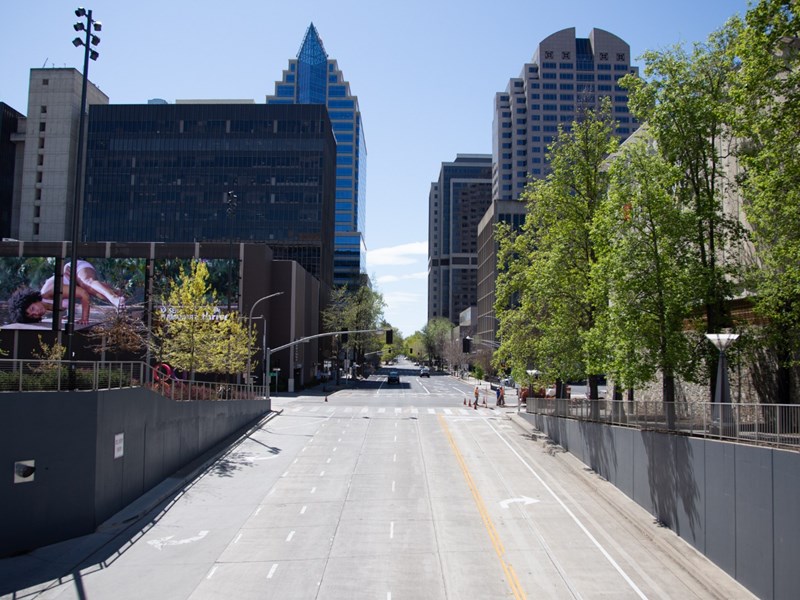 How Clean Is The Air?

With fewer cars on roads in the state’s major cities, measurements of nitrogen oxides are down by about a third. Those are pollutants produced by burning fossil fuels, said Ronald Cohen, professor of atmospheric chemistry at UC Berkeley.

“It’s pretty good,” Cohen said of his data based on satellite imagery, vehicle counts from Caltrans and measurements collected by his lab. “But we don't want it to go much further because half the nitrogen oxide emissions are trucks and those trucks are our lifeline. They're bringing us all the goods and services we need.”

Cohen’s results are similar to data collected by Aclima.

“What we're seeing is across the board dramatic reductions in the vast majority of pollutants,” Thurlow said of double digit reduction values for nitrogen dioxide, carbon monoxide, particulate matter and black carbon. That’s comparing a mix of statewide and Aclima data from the last few years to 2020.

“That shows that, in the absence of seasonality, we're seeing strong reductions and pollution across many pollutant types.”

Thurlow was surprised that reductions in black carbon levels were similar in the Bay Area and at the state level since sheltering in place began.

“Black carbon levels have dropped by more than 50% since February, and that's a huge reduction in a pollutant that's associated with a host of health issues like cardiovascular and respiratory diseases,” said Thurlow.

Both Thurlow and Cohen are thankful COVID-19 isn’t hitting at the peak of summer.

“We don't need to be having a double whammy of people with sensitivity to air pollution and who happened to get the virus too,” said Cohen. “It could be worse just if it was really hot in summer ... the air quality is worse when it’s hot.”

With a few weeks worth of air quality measurements on hand, Cohen is feeling confident that the data is unambiguous. “We have Los Angeles, the San Francisco Bay Area and Seattle, and they're all telling a consistent story.

“We'll do our best to turn it into useful information for people who think about policy and think about public health. But I would never propose that we clean the air by trashing the economy.”

The statewide results jive with the numbers out of the Bay Area, where reductions are around 20 percent for particulate matter and 30 percent for nitrogen oxide, according to the air district that represents the region.

“You could call it a silver lining in a really difficult time, but we are seeing that if there is a change in transportation and commute habits it does seem like it has some impact on air quality,” said Aaron Richardson, spokesperson for the Bay Area Air Quality Management District.

In Southern California — where about 80 percent of emissions come from mobile sources like cars, trucks, trains, buses, planes, etc. — car traffic has decreased about 33% and truck traffic is down about 20%, said Phillip Fine who leads the planning and rules division for the South Coast Air Quality Management District.

Even with the reductions in driving and improved air quality, Fine is hesitant to say just how much is from the stay-at-home order. He says it’s too early to say, in part because it rained a lot in March.

“Everyone's perception is that the air quality is clean due to the reduced vehicle traffic,” said Fine. “That has raised awareness and has given people kind of an example of what clean air could be if the emissions dropped.”

Like Fine alluded to, the better air quality comes at the cleanest time of the year, spring, which in turn could be a good thing as the COVID-19 pandemic escalates in California.

Cesunica Ivey, an environmental engineer with UC Riverside, is following the data in the South Coast Air Basin, which includes all of Orange County and parts of Los Angeles, Riverside and San Bernardino counties.

Ivey points out that measuring air quality isn’t as easy as saying one pollutant has decreased and we’re all good. She says pollutants interact. (This article from LAist explains Southern California’s complicated air quality).

For example, ozone — also known as smog — levels fluctuate depending on the weather, the time of day and the number of cars on the road.

“March 2020 ozone levels aren’t much different when considering the daily averages from 2017-2020,” Ivey said. “It’s the daily ozone swings that have changed, which is directly a result of the shutdown.”

She’s seeing air quality patterns during the week that usually “points to a shift in the atmosphere that we usually see on the weekend,” and that “humans and our activities drive environmental quality.”

Ivey made sure to point out that even though ozone levels were higher at the end of March,  they were still within the expected range for the time of year.

The Central Valley isn’t seeing as much of a reduction as the Bay Area or Los Angeles because the populations are much smaller and because the region saw the lowest levels of particulate matter this winter ever, said Jon Klassen with the San Joaquin Valley Air Pollution Control District.

“Things are already pretty clean this time of the year,” said Klassen. “It's really early to tell if what we're seeing right now is really any different from what we normally would see,” he said.

The reduction in pollutants in the Sacramento area has been minimal in part because of the good weather, says Jamie Arno, spokesperson for the Sacramento Metropolitan Air Quality Management District.

But one sensor near a major interstate in Sacramento is showing signs of a reduction of pollutants like nitrogen oxide.

“That tells us that there are less cars on the road going by that area,” said Arno. “It's also improving air quality. How much? It's hard to say until we do an in depth analysis.”

What This Moment Tells Us About The Climate Fight

These reductions also hold a lesson about preventing further impacts of climate change, says Cohen with UC Berkeley, and the extra days the Bay Area sheltered in place before other parts of the country are making a big difference.

“That's not unlike what we could do for climate,” Cohen said. “A little bit more early action on the climate front could have the same kinds of benefits. It just won't take 10 days for us to see it. It'll take 20 years for us to see it.”

This forced behavioral change of staying indoors, not driving as much and being choosy about where people purchase food could be substantial in addressing climate change, said Kate Gordon, California Gov. Gavin Newsom’s Senior Advisor on Climate.

With an economy that runs almost entirely on fossil fuels, Gordon says she’s interested in what happens when people realize what impact the decrease in vehicle miles traveled is having. She wonders if it will translate into the long term.

“I think a lot of people are realizing just how much they can do remotely,” said Gordon. “If we could get state workers down to just one day a week of teleworking, it would be a massive cut. I mean, it'd be a 20% cut obviously in vehicle miles traveled for the state workforce, which is huge.”

She says this conversation around reducing emissions for so long has been focused on things like a switch to electric vehicles. But with around 40% of the state’s emissions coming from mobile sources, a refocus on reducing the amount of miles driven could be part of the conversation during and after the pandemic.

“It feels like a real reckoning moment,” said Gordon. “I think California is in the best position probably of any state to try to rise to that challenge, but that doesn't mean it's gonna be easy.”

But for that to happen she says the state will need to become more integrated with its climate approach. For example, affordable housing, she says, should be built in smarter places so people can drive less.

“I think it's just critically important that we kind of think of this in a systemic, holistic way and really take advantage of this moment to sort of say, ‘Hey, this is identifying all the places we could have done better and let's learn from it.” 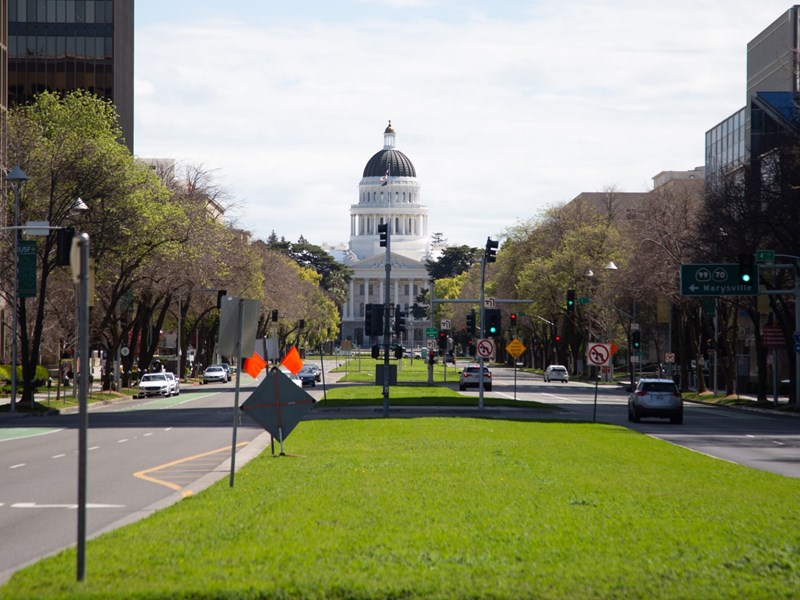 The California Capitol in Sacramento on March 31, 2020 during the state's COVID-19 stay at home order.Andrew Nixon / CapRadio
Follow us for more stories like this