In the middle of downtown Sacramento there is a 40-acre bonanza of vegetation that showcases 215 varieties of plants, bushes and trees that are found in California.

Capitol Park surrounds the state Capitol Building and has undergone many changes in the past 150 years. It was once the site of the state fair and the original governor’s mansion. Now it’s home to the Vietnam Veterans Memorial and the state rose garden.

But what interests Kathy Sher most are about a dozen orange trees with the promise of dietary nourishment for the region’s needy … if only they could be harvested.

Sher is an attorney who walks through Capitol Park just about every day. She reached out to CapRadio to ask, “What happens to all of the oranges that grow on the trees here?"

There are no oranges on the bottom branches of the dozen or so orange trees on the Capitol grounds. But there are thousands of oranges hanging from the higher branches.

Sher was hopeful a food bank could pick the fruit or at least glean it by boxing up the ones that fell. But that idea raised another question: is any of the fruit fit to eat? As part of our “Great Question!” series, we went to the park to find out.

As luck would have it, an orange had fallen from a tree and split open shortly before I met Sher at 10th and L streets. It had a little dirt on it, but otherwise the meat was clean. I asked her if she was up for trying it to see if maybe this was an edible one.

She agreed, but then the attorney part of her spoke up: “Although all the signs say not to eat the oranges."

The signs, which are green, small, rectangles that are perched about a foot off the ground, actually say, "DO NOT CLIMB TREES DO NOT PICK FRUIT PER CCR 1868." That's short for California Code of Regulations.

There is no picking of the fruit. Only picking up of the fruit. I explained that we didn't pick it. It had fallen. We clinked slices in a “cheers” and prepared for the worst. We were happily surprised.

It was a Washington navel orange according to the sign on the tree. So, we had partially answered one question. Some of the fruit is edible, but is all of it? And what happens to it when it falls?

The answer to her question about the fate of the fruit and how edible they all are was to be found over on the other side of the Capitol building, past a Valencia Orange tree with a plaque that reads "Largest in the nation."

Landscaper Bao Hoang was chucking oranges he’d just picked off the sidewalk into a gray plastic cart. He says, no exceptions: The fruit goes in the compost pile.

I asked if he wished he could box them up and take them to the food bank. 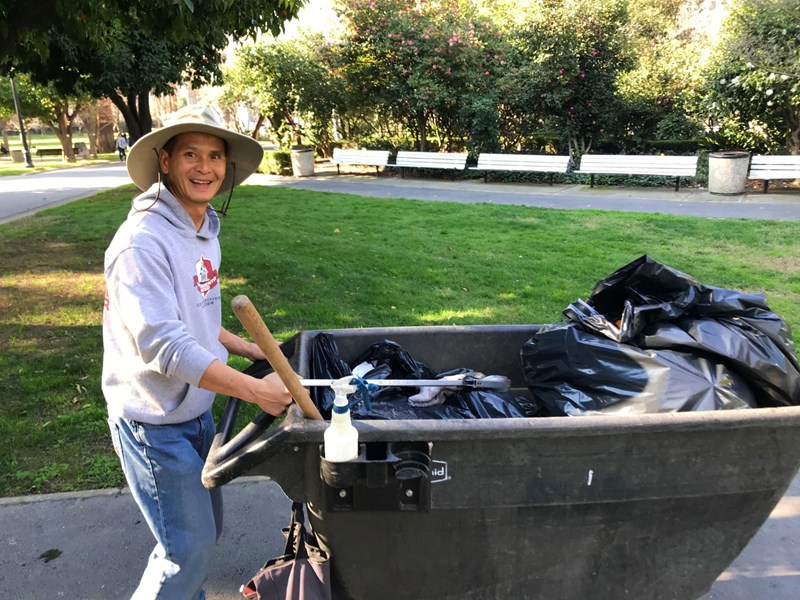 Department of General Services groundskeeper Bao Hoang makes his rounds at Capitol Park. One of his jobs is to keep the pathways clear of fallen oranges.Bob Moffitt / Capital Public Radio

“No no no,” he replied. “When they fall it's a mess, they split. All the juice will make a mess so it's not good to give away. But you know, state property, we don't have time to do that and they don’t allow us to do that.”

Though Hoang did say shaking of the trees late in the season was okay in order to bring down mass quantities of overripe oranges.

Who planted these trees? Vito Sgromo recently retired from the Department of General Services and is a historian. According to him, the park has been used for all kinds of things.

"The State Fair used to be held here from the 1880's all the way to the 1920's and they would close part of the park off with a fence and they would have children's rides,” Sgromo said, while standing in the shade of a less mature navel tree compared to the one before. “They would have cattle here. The governor's mansion was never really used as the governor’s mansion, but it was here until the 1920's. So you would have different uses over the period."

There is no evidence an orange grove was one of them, and nothing to say when the trees were planted. Sgromo believes the first were planted at the order of then-Gov. Hiram Johnson a little more than 100 years ago to celebrate the growing citrus industry, but the majority were likely planted after World War II.

People enjoy navels every day for eating and Valencia oranges for juicing. Seville oranges are used for marmalade.

Mike Bennett is the Grounds Operations Manager and says the squirrels aren't picky, unlike some humans.

"A little while ago I watched a couple of ladies reach up into the tree to knock out some oranges, thinking that was going to be one of the best eating oranges they ever had, right?” Nielson laughed. “When they took off the rind and bit into it, they immediately gagged and threw it down on the ground. It's not a good-eating orange!"

The oranges those ladies tried are the Sevilles. We decided to see if it was a matter of taste. Word to the wise. Bring a towel, they're mushy.

As juice dripped all over the ground and my shoes, Cyndi Reimer and Susan Hardesty happened along and agreed to try a slice.

Hardesty alternated between giggling and gagging. “That's really rude,” she laughed, pointing to her throat. “It hurts right here."

For Kathy Sher it wasn't all that bad.

"It's a little sour. You could see why you would make marmalade out of it," she said.

The marmalade jar is half full for some people. Sher was more disappointed to find out almost all of the varieties end up in the compost bin.

"I think it's a shame that there isn't some way at least for the trees that bear sweet fruit go to some kind of human consumption,” she grumbled. “The squirrels can't eat them all."

We debated whether we should tell people which ones were edible... and enjoyable.

“Wouldn't we be encouraging people to break the law?” she asked.

But then we noticed there were no navel oranges within reach. It dawned on us that word might be out.

Shortly after that, Richard Daverin and his mom Brenda happened by. They were in town from Tehachapi. The oranges were tempting Richard.

“I bet I could reach that,” he told his mother. I told him that even if he is 6’4”, he’d be violating California regulations if he did. Then I offered them the rest of the orange.

Maybe not. The California Highway Patrol says if you can beat Hoang or the squirrels to what just fell, you can eat your share.

The department says it wouldn’t doubt that someone has been cited for climbing a tree or picking fruit in the past, but none of the officers we spoke with could remember an instance. It doesn't track citations for orange-related government offenses.

And why would you? The forbidden fruit will come to you, sooner or later. 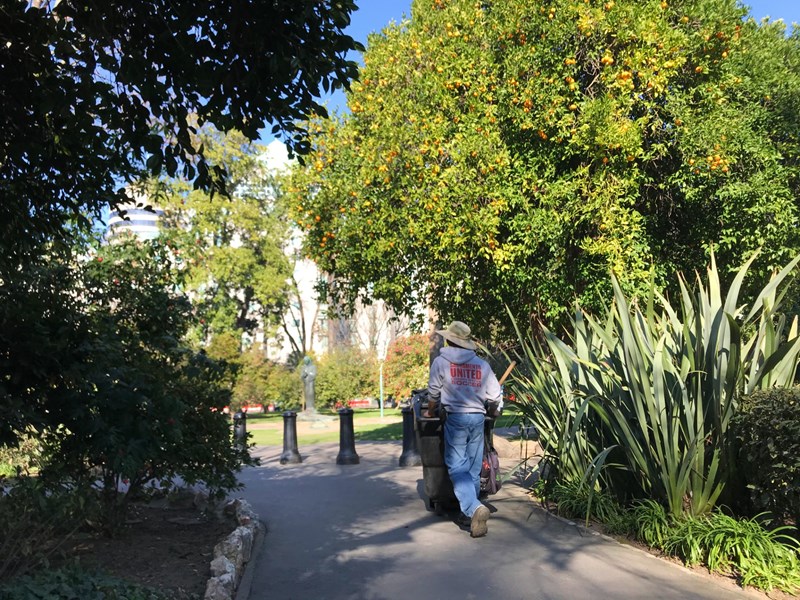 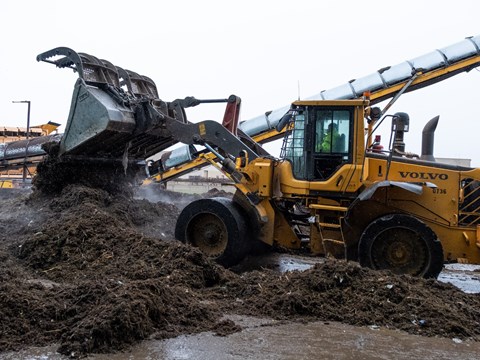 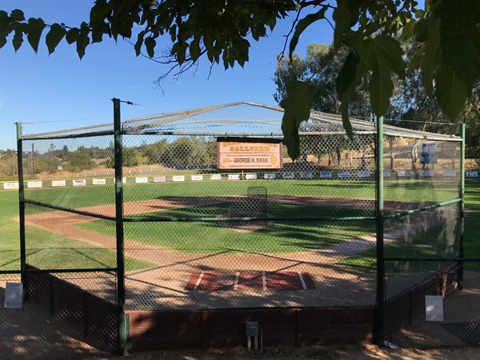