The walls of Madison Sheffield and Matt Frantz’s Sacramento apartment tell the story of their five years together. Mountaintop photos from weekend camping trips fill the living room. A handmade calendar in the kitchen features a different dress-up photo of their dog, Waffles, for every month.

They were drawn together by a shared desire to give back: Sheffield works in public health and Frantz is an engineer for Cal Fire. But the last two autumns have brought new challenges to their relationship as Frantz fights fires for longer stretches and experiences more traumatic events in the field.

Sheffield says she’s constantly worried about the chronic stress of her partner’s job.

“I’m missing a key part of my support network, and same for him,” she said. “The not knowing when he’s gonna be home is one of the most difficult parts about it.”

As California fire seasons worsen, organizations serving first responders are trying to spread the word about the need for mental health services. And they’re encouraging family members and loved ones of firefighters to seek help, too.

“It’s that vicarious trauma,” said Cal Fire Battalion Chief Nikole Schutz, speaking during last year's Camp Fire. “Seeing things on social media or being exposed to it all the time, knowing they’re gone for a length of time, just those exposures or the unknowns can affect family members.”

“I’m missing a key part of my support network, and same for him. The not knowing when he’s gonna be home is one of the most difficult parts about it.”

Sheffield says she felt a deep sense of loneliness when Frantz started working for more than the usual three or four days a week. Last fall during the Camp Fire, he was away for 28 days straight. She fretted about his safety, but learned over time to not let those feelings take over. And they found new ways to check in about risk, such as Frantz sharing his work location with Sheffield through their iPhones.

“He does a good job often of letting me know that he’s on a fire but he’s not necessarily on the most dangerous part,” she said.

“I usually am pretty clear with her to assuage worries,” Frantz said. “Safety is a pretty huge priority for everyone working in the field.”

And when Frantz gets home, Sheffield has to remind herself to give him space to rest and relax, even when she wants to dive into social activities.

“When he’s home I’m in a totally different place,” she said. “When I think about how much his job is demanding of me as a partner, as a family, it’s demanding even more of him. So just allowing him to even check back in with himself and get his own bearings has been a big one for us.”

Law enforcement agencies across the country are reconsidering how to provide behavioral health support to their employees. Leaders in the field say the longstanding taboo that’s kept many firefighters, police officers and even military personnel from seeking treatment is finally slipping away

“There was a stigma out there,” Schutz said. “That if I reach for help, people are gonna think I’m weak, they think I can’t do the job. What we’re finding now is that’s not true. You have normal reactions to an abnormal situation, and it’s perfectly fine to ask for help.”

Psychologist Joel Fay with the nonprofit First Responders Support Network says the firefighters who were on the Camp Fire last year are likely still processing their trauma.

“First, there’s gonna be a culture like ‘We’re ok. We came, we saw, we kicked its butt, we went home,’” he said last fall. “Then some firefighters are going to start showing symptoms. They’ll be grumpy at home, they’ll start not wanting to go to work. They’ll begin drinking. It’s only when those coping strategies stop working that the responder asks for help.”

And often, it’s the first responders’ loved one that brings up seeing a professional.

You have normal reactions to an abnormal situation, and it’s perfectly fine to ask for help.

Given the scope of the problem, Fay says employers should be doing more to address it.

“Some agencies only offer three sessions a year,” Fay said. “For someone with PTSD it’s almost unethical to treat them only three times. It just doesn’t make sense.”

He says first responder agencies must educate their employees on how to recognize the signs and symptoms of mental illness.

“Emotionally surviving a career is a perishable skill,” he said. “We have to keep coming back and reminding people of what they can do.”

Bringing support to the fire line

Some agencies are trying to take a more active role in managing firefighter mental health during critical incidents, rather than after.

At the Camp Fire base camp in Chico last November, Cal Fire set up a peer support trailer offering games, charging stations and snacks to firefighters coming back from long days on the fire line. They gathered over vats of coffee and decks of playing cards before counselors brought out Lady Grace, the therapy dog on duty.

Cal Fire sets up these trailers for most major incidents. They’re staffed by firefighters and other employees who are trained to talk about anxiety, depression, PTSD and other mental health issues.

Jeff Serpa, a fire chief from Stanislaus County, showed up to the trailer with a dozen volunteer firefighters who’d been out for two weeks. They clambered into a tent for a scheduled debrief with peer counselors.

Serpa said he’s had to find ways to process his own mental health struggles, and wants to encourage his team to do the same.

“They’re human beings,” he said. “We don’t want them to take this home to their family and have it affect their family life. We just want to give them skills.”

Cal Fire Battalion Chief Mike Ming said the agency is working on teaching firefighters strategies to deal with the “biological roller coaster” that they’re on during a fire.

Recent studies suggest PTSD shrinks the hippocampus, a part of the brain that regulates memory. It also causes the amygdala, which controls emotions, to shift into fight-or-flight mode even when there isn’t a threat.

“If we understand what’s going on scientifically, then we’re that much further ahead,” Ming said. “So instead of being reactionary, we’re being progressive and we’re educating all our folks now about what’s happening to them and what they can do in the moment to relieve that immediate stress.”

That might include controlled breathing, meditation or other ways to calm the nervous system. Other agencies are following suit. Butte County is using a new $1 million grant to offer counseling, yoga and a health and wellness app specifically designed for first responders.

Back in Sacramento, Frantz understands that some of what he sees at work is traumatic, but he says it doesn’t really affect him when he’s on the job. Adrenaline is too high, and he’s too focused.

But he is still processing his experiences from the Camp Fire, even while fighting this year’s blazes. He says the more recent fires, the ones that encroach on urban areas to claim homes and lives, hit firefighters harder than the ones that stick to the woods. This year’s Kincade Fire in Sonoma County destroyed 78,000 acres and 374 buildings.

“I don’t think it used to be normal for you to respond to a large vegetation fire that grows really quickly in one burn period and burns a bunch of homes, multiple times in a summer,” he said. “That never used to be a normal thing. So the last two years for sure we’ve seen that happen a lot of times. That can be stressful.”

Sheffield worries about Frantz driving long hours back to base after a rough night watching buildings burn. And on top of that she thinks about the everyday health impacts of the job: sleep deprivation, toxic chemical inhalation and even poor diet at base camp. 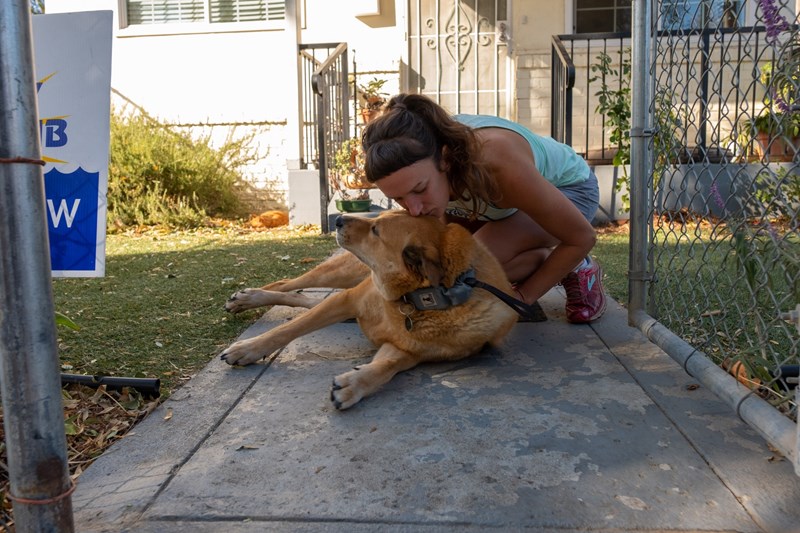 She’s been accessing therapy through her employee health insurance and says it’s helping, but is still searching for more resources for first responder loved ones.

Each Cal Fire employee and their spouse is entitled to 28 sessions with a mental health professional annually, but those benefits are only available to spouses and registered domestic partners.

Ming said the Employee Support Service team that oversees these programs will grow from seven to 12 employees by the end of this year, and to a staff of 20 by the end of next year. Gov. Gavin Newsom has allocated new state funding for this expansion and other programs designed to help the state’s firefighters.

The department is also expanding group gatherings for significant others, also known as “spouse’s conferences”, where first responders and loved ones can meet to swap stories and share resources. The agency used to put on about two a year, but now it hosts between eight and 10 annually.

“We won’t turn our back on anybody,” Ming said. “Anybody that’s associated with our first responders and looking for help, we will help them.”

Sheffield tries to encourage Frantz to use his go-to calming methods, which include yoga, meditation and rock climbing. Last time he came home for a long break, she bought him a massage. They often cook healthy meals together as a way to reconnect.

And she knows communicating about stress will be crucial in the coming years.

“Climate change is not going away tomorrow,” she said. “It’s not gonna get better in the immediate future, so knowing how to support ourselves and take care of ourselves and the people doing this difficult work, is very important.”

Resources for firefighters and their loved ones.

For Family Members and Significant Others

Significant Others and Spouses Program from the First Responder Support Network

This blog post, “A Year in the Life of a Cal Fire Wife,” details one wife’s experience.