‘I Own This’: Gov. Newsom On California’s Wildfire Emergency, PG&E Power Shutoffs And More

California Gov. Gavin Newsom declared a statewide emergency Sunday as nearly 200,000 people were ordered to flee their homes because of wildfires fueled by historic winds.

Meanwhile, millions were without electricity after PG&E cut power in some areas as a precaution to prevent other fires.

Newsom said in a statement that officials are deploying "every resource available" to respond to the wildfires, including a large blaze in Northern California's wine country driven by powerful winds.

CapRadio’s Randol White spoke with Newsom on Sunday about the wildfires, PG&E’s role and the future of the utility. Read through their conversation below or listen at the top of the page.

Governor Newsom, thank you for making time to speak with CapRadio today. You declared a statewide emergency because of the wildfires and extreme weather. How does that now change the operations moving forward?

Yeah, it allows for unemployment insurance to be drawn down sooner, allows us to bring in more backup generators without the usual air resource paperwork. It also allows for more mutual aid to be brought into the state without other types of paperwork. So it's just an opportunity to advance contracts and resources in a more expeditious manner. This is on top of the previous declarations in Sonoma County and LA County related to fires earlier in the week.

In terms of the number and size of wildfires California has managed this year, it had been relatively quiet up until recently. Does that put Cal Fire in a better position regarding funding and resources to handle the large fires currently burning simultaneously?

Yeah, you know it's rather remarkable and it's hard to actually believe. What we're experiencing from a wildfire perspective at the moment is actually quite normal. Not abnormal, meaning not worse, not much better than had been the historic patterns of the last few decades. We went through a five-year drought and then had one of the wettest winters. We were benefited from a lot of dampness earlier in the fire season. But this time of year, you have that one calculus that always is a big part of our preparation and points of concern, and that's the wind. The Diablo winds up in the northern part of the state, the Santa Ana winds and the southern part of the state, and that's always a tried and vexing issue. And you have that now combined with these power shots is what makes this moment so much more anxiety inducing.

And Cal Fire's resources ... there's plenty for them right now to do what they need to do?

Cal Fire's never been better resourced, period, full stop. Perhaps in historic terms, many decades ago. I may not necessarily be as accurate, but in modern terms based on the last two decades. 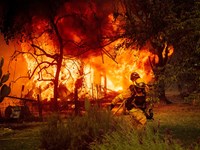 We provided additional $1 billion of resources to focus on wildfire suppression from the first weeks that I came into office, these 200 vulnerable communities we identified for vegetation management, evacuation planning. We got emergency grants to the cities and counties in February of this year. We didn't wait for the budget in ... June and July. $109 million though did come out of the budget for new Black Hawk helicopters, new C-130s and new technologies like cameras and infrared capacity for nighttime vision and suppression strategies.

But also for pre-positioning, we put historic number of pre-positioned engines and crews, which are multiple engines and types of ambulances and alike all throughout the state, and that has been a godsend for us. A lot of these smaller fires never became big fires because of the heroic work of Cal Fire and their mutual aid supplies. that had been prepositioned in anticipation.

You've had harsh words this past week for PG&E and the state's other investor-owned utilities. In a perfect world, what would you have the utilities change starting immediately?

Well, they're living ... look, people may have their own view on global warming/climate change, but no one can deny observed evidence even if they're denying science. The five-year drought — what more evidence do you need of a wake up. These new atmospheric rivers coming in. These extremes that we're living through — hots getting hotter, drys getting drier, wets getting wetter, require completely reimagining how you deliver electricity. You simply cannot afford these overhead lines in these vulnerable parts of the state. We've gotta harden our equipment, we've got to modernize our equipment, micro grids, new strategies of distributed networks, more accountability from the investor-owned utilities.

We also need to look at the scale and scope of a utility like PG&E that operates from the Oregon border down to parts of Santa Barbara County, and looking whether or not that scale of operations should even persist in a modern state. And so all that is long overdue. I own this. I've been in office now nine months. My Public Utilities Commission, which has new leadership as of a few weeks ago owns this. We recognized the need to do something in this space many months ago and have now required $5 billion of investments as part of the plan. There is a plan. We're implementing that plan — $5 billion of public safety investments, a new subcommittee at PUC that approves wildfire mitigation plans that are now required from the investor-owned utilities on an annual basis, executive compensation tied to public safety. All of this is brand new. None of it existed a year ago, and all of it needs to be implemented. And now all of us need to be held fully accountable over the course of the next year or two.

Does the CPUC have the power to force PG&E to pay customers for their losses that were the result of the blackouts?

Open-ended question, and it's a legal question that looks like that may not be legally required of PG&E, that doesn't mean they shouldn't do it. And so there's two kinds of authority. There's formal authority and there's moral authority. We will try to use both to make PG&E do the right thing. We do, however, have the ability to fine PG&E and we will, I can assure you, assess the appropriateness of their actions and adjudicate the facts and make a determination, and if we do, I do remain committed to doing what we can to rebate individuals and businesses that have been impacted directly. And certainly not just see the money go wasted. I want to see it back out in the community, particularly those that have been impacted by this disruption.

When PG&E issues massive blackouts affecting millions of people, the utility gets criticized for not being perhaps selective enough with their strategy. But when they don't cut power during these wind events, and then their equipment sparks a fire like we saw in Sonoma County, they get criticized for not cutting power to enough lines. Is PG&E in a no-win situation in this era?

I think it's a very thoughtful question. And you're right about that, let's be honest, and let's be specific. During the Camp Fire, we had gusts that were actually more modest than the wind gusts we've experienced the last 24 hours. The night before the Camp Fire that took 85 lives, the most destructive wildfire in California history, PG&E chose not to de-energize when those winds peaked about 60-65 miles an hour. The day of the fire the winds actually were more modest, even though they were significant. So you're absolutely right. It's sort of damned if you do, damned if you don't.

But here's the difference. This is an important difference. PG&E right now has incentives for bad behavior. There's no legal liability or no legal obligations by turning out the power. There is, if, as you suggest, they don't, and they're held liable if one of their lines sparks a fire. We've got to change the incentives so that they have skin in the game for both de-energization and not making that determination. And so that's something the PUC is assessing in real time. I met with my PUC director last week and again this morning on this topic. They're going to hit the ground running. They've been doing a series of public hearings over the last few weeks, including up in Redding, California, just two days ago, and they're going to be coming out with specific recommendations on that topic.

Years ago, the CPUC was criticized for being too chummy with PG&E. Those days are over?

Oh boy, if they're not I will assess the other members of that committee. I've had the privilege of just appointing one member, and I look forward to making additional appointments. But I have the confidence in the current commission right now that they get it. And to the extent that that was a bad past practice, I assure you if the new president of the PUC is in any way, shape, or form, indulgent in that respect, her tenure will be short. But I put her there because I have great, great confidence in her integrity, her character, in her past performance in other capacities where she's delivered.

Editor's note: In his answer above, Newsom incorrectly suggested that he can fire a commissioner if he wishes. In fact, as we explain in this in-depth look at the California Public Utilities Commission's sprawling responsibilities, commissioners are appointed by the governor, are confirmed by the Senate, and serve fixed six-year terms to insulate against political pressure.

Governor, finally, you've mentioned that PG&E will be a far different company when it comes out of the other side of bankruptcy. How so? Is there something specifically that you'll be pushing for?

I'm working — I cannot impress upon you how many months we've been making private pleas to other entities to look at potentially competing for the assets of PG&E, been working with my old city, San Francisco, and their efforts to look at specific assets on the municipal side. I had conversations with [Mayor] Sam Liccardo and San Jose, about his interest in the same. So we are looking at many different entities, so that we're not limited just to one hedge fund with Wall Street values being the only bidder. We want to make sure that there's a real competition for assets, and we want to make sure that whoever gets this private company out of bankruptcy, that they have your interests at heart and not just the shareholders' interest.