Climate Change Is Increasing Tahoe's Risk Of Wildfire. These Residents Want To Be Ready.

It’s a Saturday morning in May, and Matt and Kathy Duggan are evacuating from their vacation home in the Golden Bear neighborhood of South Lake Tahoe.

As they head to the front door of their cabin-style home, they throw backpacks full of emergency essentials over their shoulders and grab a map showing the route to the safe zone. They lock the door behind themselves and hop in their car, leaving behind the home and the forest that surrounds it.

There’s no fire on the horizon in Golden Bear — this time. The Duggans are in South Lake Tahoe to participate in a community fire drill, planned to help residents of Golden Bear get what officials refer to as “fire ready.”

The Duggans currently live in Texas, but they have owned their second home in Tahoe since 2013 and vacationed in Tahoe for years before. Fire has always been in the back of their minds, but since the Camp Fire burned through Paradise last year, the worry has become more pronounced.

“There’s one way out of the neighborhood and that one road is about a mile away,” Matt Duggan said. “That’s concerning to me. I can easily picture somehow the fire not being right at this house, but down there, and then you have a bunch of people trapped inside this neighborhood.”

This worry is a big one for many who live in Tahoe. When is the next big fire coming, and how can they get prepared so that they’re ready when it does?

The science of fire danger

Wildfire is a fact of life for those living in areas like Tahoe, where urban areas intersect with forest landscapes. Fire risk in much of the California portion of the Lake Tahoe region is very high, according to Cal Fire records.

And South Lake Tahoe has burned before. The Emerald Fire and the Angora Fire both burned in the area in the last 15 years.

It’s not just the current risk of wildfires in the Lake Tahoe Basin that’s troubling to officials and residents. Projections show the risk and intensity of wildfires in some parts of the basin will get worse as the climate changes.

But parts of the basin, including South Lake Tahoe, could face an entirely different problem: Fire fuels (and fire risk) are expected to decrease because climate change will lead to less plant life in the area.

The climatic water deficit is expected to increase substantially in some parts of the Lake Tahoe Basin, according to a draft climate vulnerability assessment of the basin put together by the California Tahoe Conservancy and scientists and stakeholders throughout the region.

This means that, as the climate changes, soils will be getting much drier. That added stress leaves forests more susceptible to diseases and insects like bark beetles.

Drought stress can actually cause trees in the Sierra Nevada to emit chemicals that tell bark beetles the trees are vulnerable. That makes them more enticing to the insects, according to UC Davis’ 2018 State of the Lake report. Bark beetles ravaged trees in Tahoe and all through the Sierra Nevada during the last drought, leaving forests at a higher risk of burning in a wildfire.

'You have to have a plan'

As the risk for wildfire in the Lake Tahoe Basin grows, residents like Donarae Reynolds and Patti Assayag want to be ready when it comes.

Reynolds and Assayag teamed up with local fire authorities to plan the evacuation drill in Golden Bear, which about 150 residents participated in. Their neighborhood has windy roads, and residents think it would be a hard place to evacuate in case of emergency. 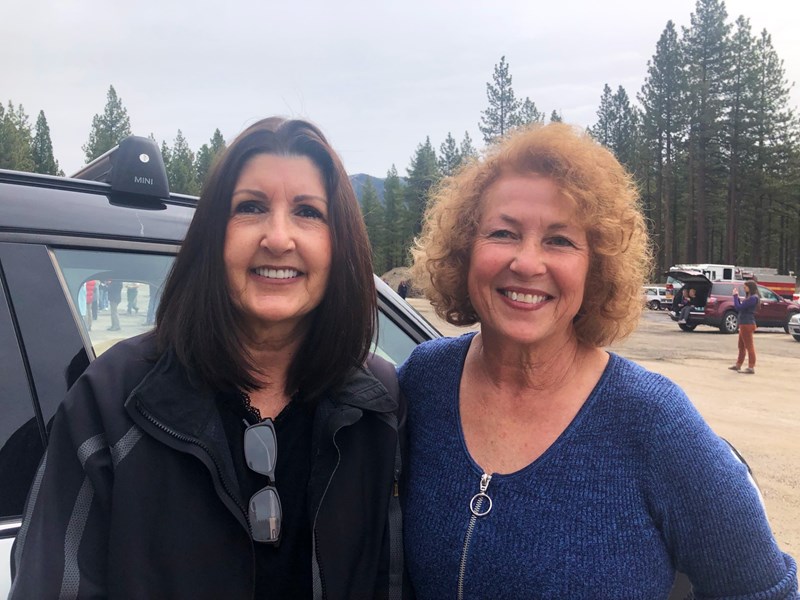 Patti Assayag and Donarae Reynolds, who played a key role in planning the Golden Bear evacuation drill, gather people at the safety zone set up in the neighborhood for the drill.Emily Zentner/Capital Public Radio

Assayag herself was pushed into action by a fire in Golden Bear that almost burned her own home. Last fall the house next to her caught fire due to an issue with an outdoor grill on a day with high fire weather risk, and Assayag wasn’t home to put it out. The blaze singed her windows and her siding.

“That fire, it really motivated me to get involved with the community,” Assayag said. “(Lake Valley Fire Protection District Chief Tim Alameda) asked for some volunteers and I and Donarae volunteered, so that’s how this all got started.”

For Reynolds, there’s a tradeoff involved in living in a place like South Lake Tahoe. The forest surrounding it is part of what makes the place so special, but it’s also one of the biggest risks. That’s why she thinks preparedness measures like the drill are key to living safely and responsibly in Tahoe.

For lifelong Tahoe resident Jeff Koeck, it’s clear that fire is a concern in Tahoe. But now, living in the Golden Bear neighborhood with his wife and young kids, the thought of evacuating is a bit more complicated.

He said the drill forced him and his wife to research what to put in an evacuation “go bag” to prepare to leave at a moment’s notice with the kids in tow. In preparation for the drill, they had bags filled with diapers, wipes, milk, bottles and more supplies they would need before heading to an evacuation shelter.

“I would definitely suggest doing that,” he said. “We spent a couple of hours getting those all together and then today when we did the drill, it was really easy to grab the bag. It goes in the back of the car, kids go in, everybody’s a winner.”

“We want our communities to be, we refer to it as being fire adaptive,” he said. “That they understand, ready, set, go. Get ready, get set, and when the time comes, if you need to leave, leave.”

Alameda said that major fires are a fact of life, and that that’s why preparatory steps like holding evacuation drills and clearing fire fuels from around homes are so important.

“I’m going to tell you right now: We’re going to have large scale fires,” Alameda said. “We need to be adaptive. We need to understand the environment we live in. We need to prepare, on one end of it, for the fire. But on the other end of it, fire prevention with fire adapted communities, it means we need to take a more proactive approach to forest health.”

How to prepare for fire

Creating defensible space means clearing the area around a house of potential fuels, including brush, trees, pine needles and more, according to Cal Fire’s Ready for Wildfire site. Defensible space can help save a home from burning in a wildfire, but it also can help stop or slow the spread of wildfire. It’s also important to keeping firefighters safe as they try to defend homes.

The drill and clean up day succeeded in their mission to get Golden Bear residents thinking about the next big fire and how to get ready. In an inspection at the end of the summer, Cal Fire reported that 96 percent of the more than 300 homes in Golden Bear met its defensible space requirements.

Fire officials in the region, including the Tahoe Fire and Fuel Team, have planned similar community events all over the basin to help prepare others like they did in Golden Bear.

But creating defensible space around their forest getaway is a tough pill to swallow for the Duggans. They come to Tahoe to enjoy the trees and nature that surround their home, and cutting down the trees closest to the house just isn’t worth it to them.

“I’ve got to say, a lot of the reason I like the area and this house and this lot are the trees that are close by, that we feel it’s in the forest,” Duggan said. “That’s the danger. That’s the tradeoff. But I don’t want to cut down those trees and then be living on a bare lot. So I guess that’s just the risk I take.”

If you’re looking for more information about how to prepare for wildfires, head to Cal Fire’s Ready for Wildfire site to learn more about preparedness and safety before and during a wildfire. 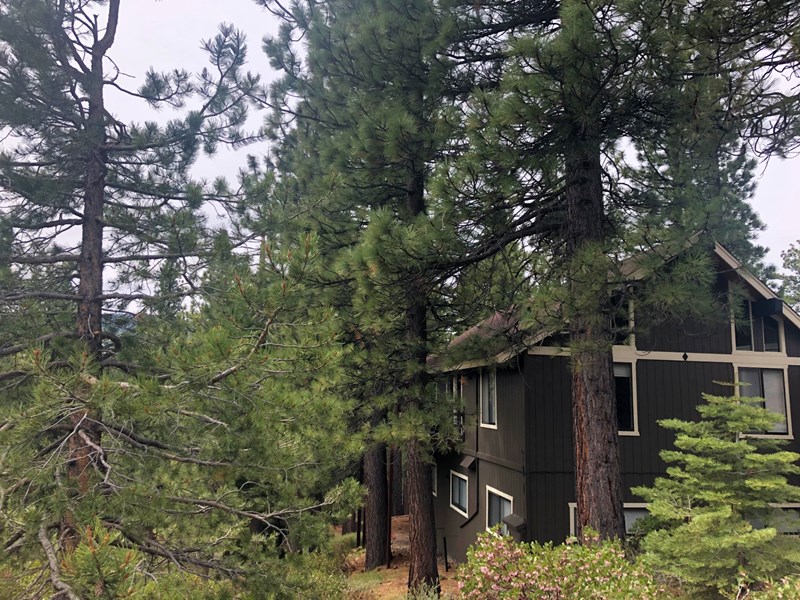