‘Our Planet, Our Home’: Sacramento Youth Join Global Climate Strike With Demonstration At The California Capitol 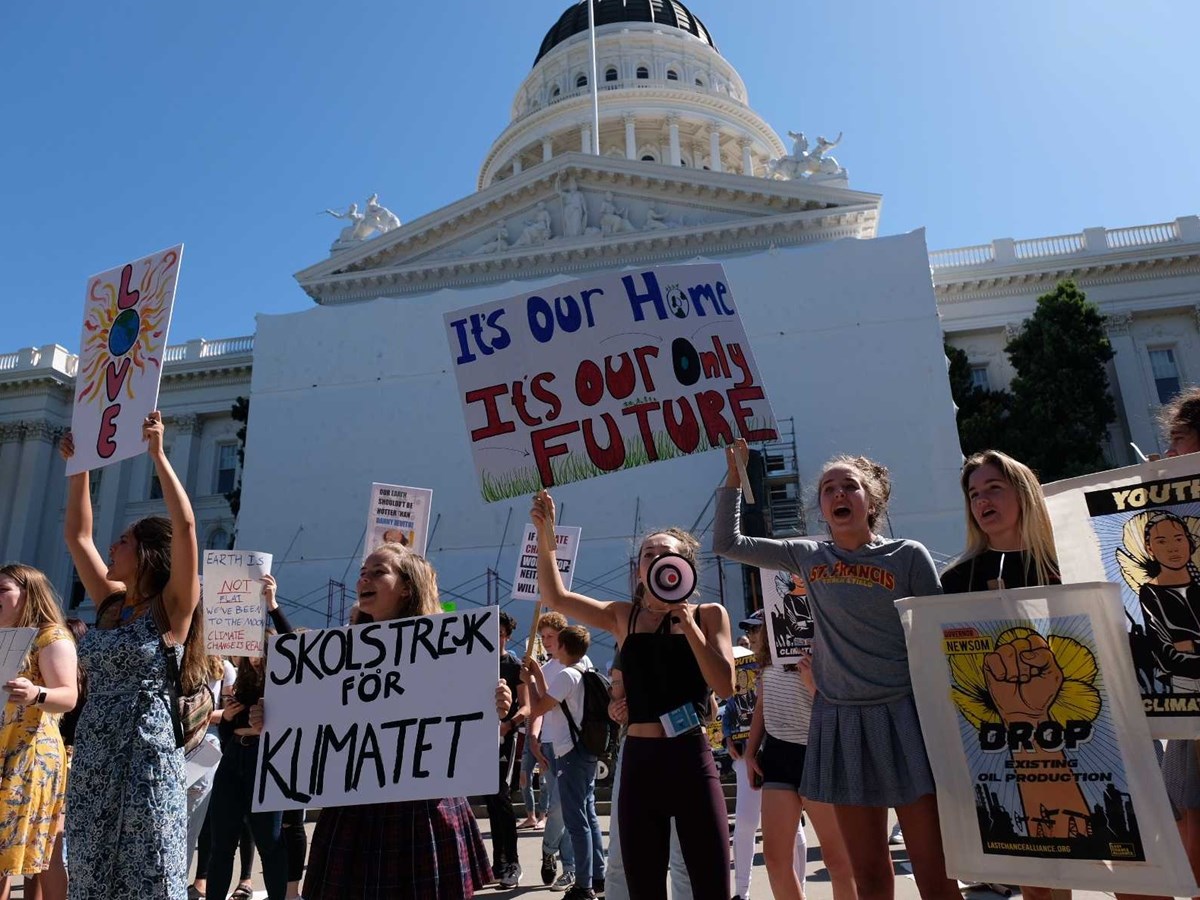 Demonstrators at the California state Capitol for the climate strike in Sacramento on Sept. 20, 2019.

Sacramento-area youth and adults contributed their voices to the global call for action on climate change with a demonstration Friday at the California Capitol.

The protest was one of hundreds planned across the U.S. and the world as part of the Global Climate Strike. The demonstrations demand that governments and businesses recognize the urgency of the climate crisis and move away from the use of fossil fuels in favor of renewable energy.

At the Capitol, hundreds of students absent from school held signs with slogans like “Why should we go to school when you won’t listen to the educated?” and chanted “Waters rise, hear our cries, please don’t let our planet die.” 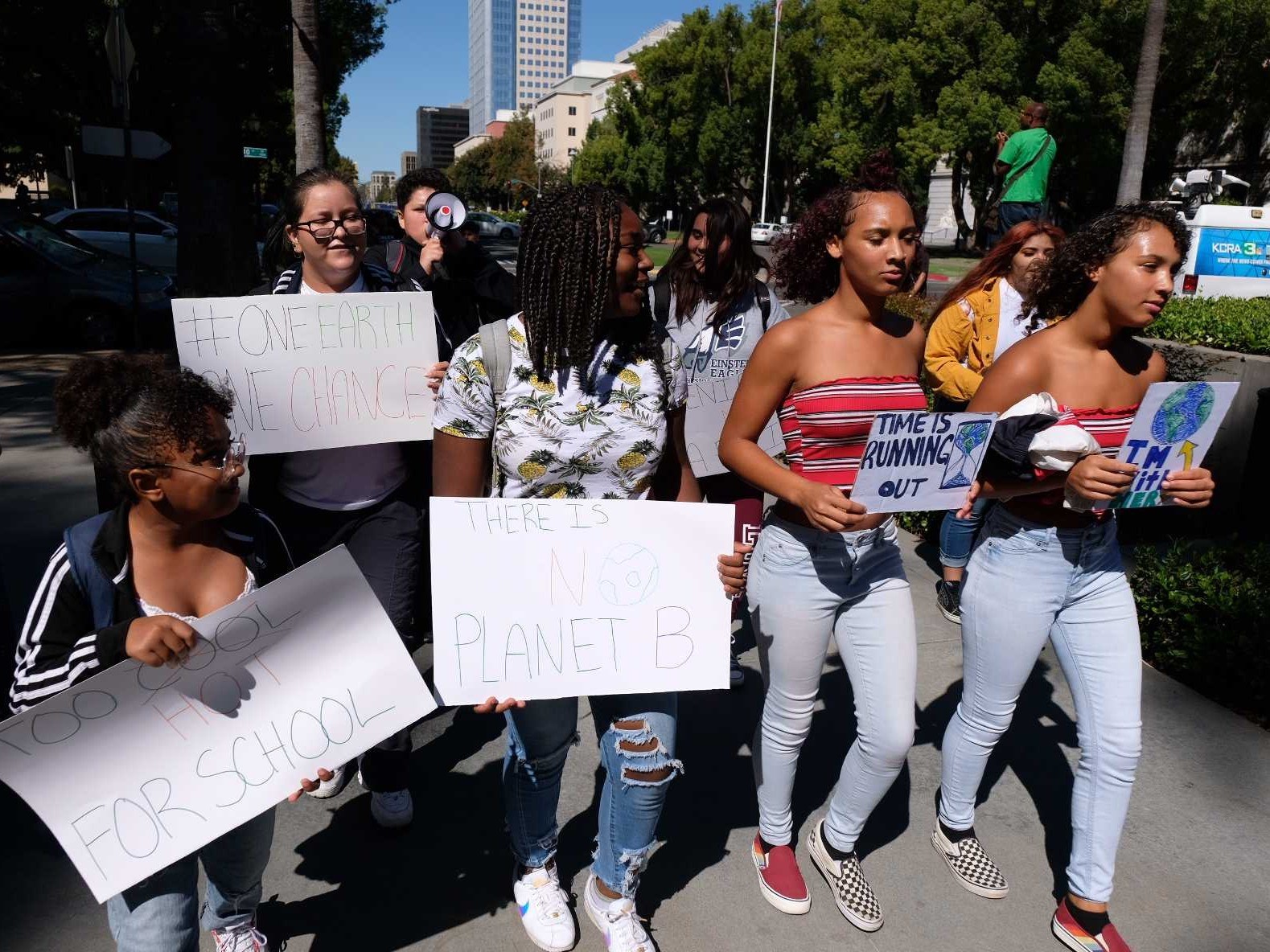 Strikers wall up to the West steps of the California state Capitol at the climate strike on Sept. 20, 2019.Andrew Nixon / Capital Public Radio

Malia Tignor, an 11th grader at Antelope High School, was slated to give a speech on the damage humans have caused to the Earth, calling on current generations to help fix it.

“If rapid action is not taken, we will have devastating consequences that will affect us well into the future and we’re raising our voice and saying we don’t want that,” she said.

Addison Phillips, 19, who attends Folsom Lake College, said she joined the strike to raise awareness about the climate crisis.

“I believe that something needs to be done about climate change. I’ve never been to a climate change strike before and I wanted to do it because I think things need to change,” she said.

The protests come ahead of the U.N. Climate Action Summit that begins Monday in New York. The youth movement was inspired by 16-year-old Swedish activist Greta Thunberg, who garnered attention with a speech delivered at the U.N. climate conference in December. 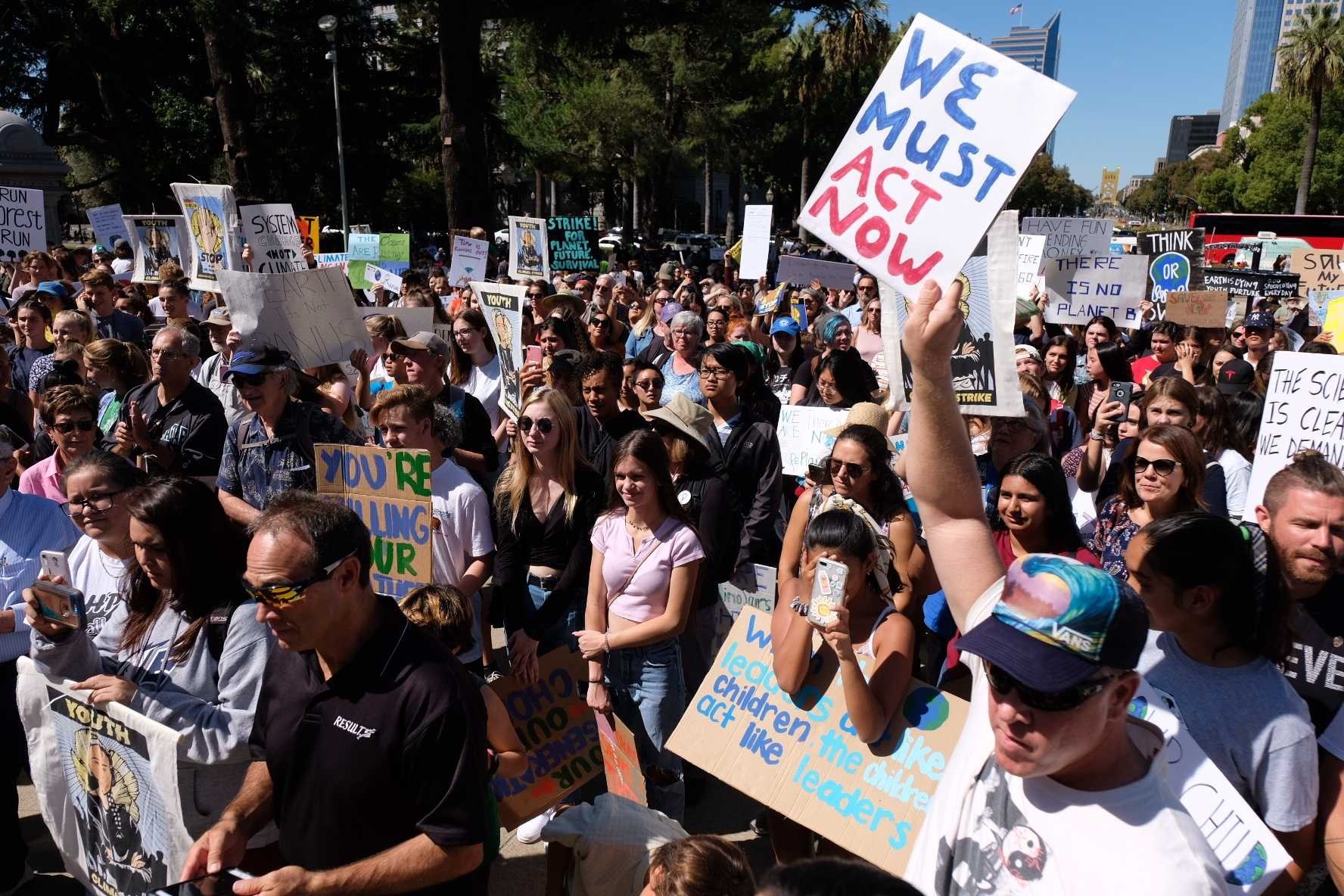 The Sacramento organizers in particular are calling on Sen. Dianne Feinstein and Rep. Ami Bera to sign the National Climate Emergency Declaration Resolution and for Gov. Gavin Newsom to “go beyond just words.”

“We demand that Governor Newsom not authorize any new fossil fuel projects, and live up to California’s reputation [as an environmentally friendly state],” the official online event invite reads.

In a tweet, Rep. Bera said he was “inspired” by the youth demonstrating at the Capitol.

“Climate change poses an urgent threat to not only #California and the world, but to future generations,” he wrote. “We have a responsibility to act to address this crisis.”

In recent years, people have put more pressure on public officials to confront the risk climate change poses by reducing carbon emissions, improving infrastructure so that it’s more resilient to extreme weather and addressing the disproportionate effects it can have on working-class and minority communities.

Progressive lawmakers included those goals included in the Green New Deal, a proposed congressional resolution that would transition the entire US economy away from fossil fuels. 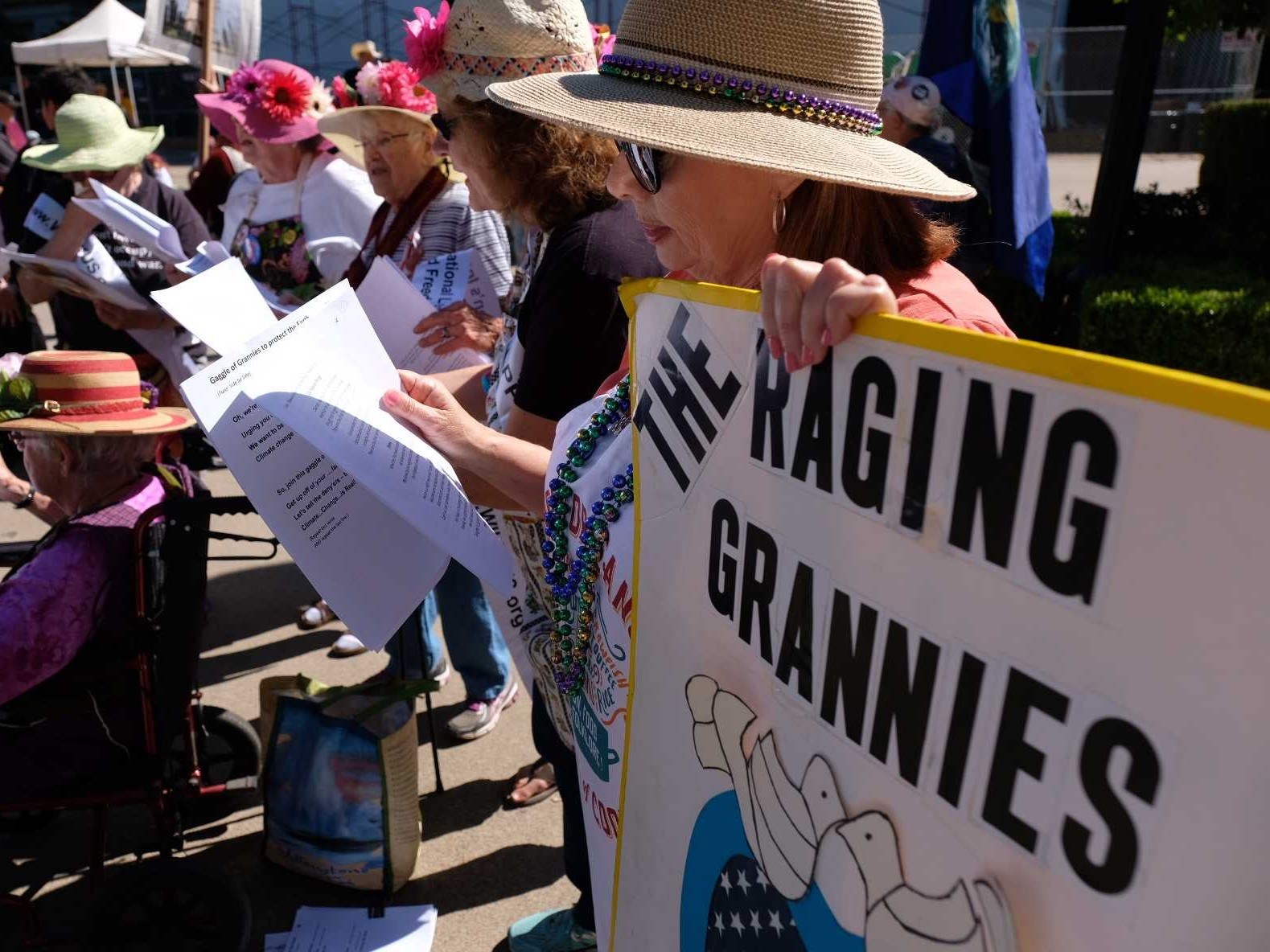 Student activists at the University of Nevada, Reno also walked out of class to attend an on-campus rally, joining the strikes in more than 150 countries.

Graduate student and lead organizer Stallar Lufrano-Jardine coordinated the strike because climate change is already affecting Reno, which is the fastest-warming city in the country according to a recent study by Climate Central. 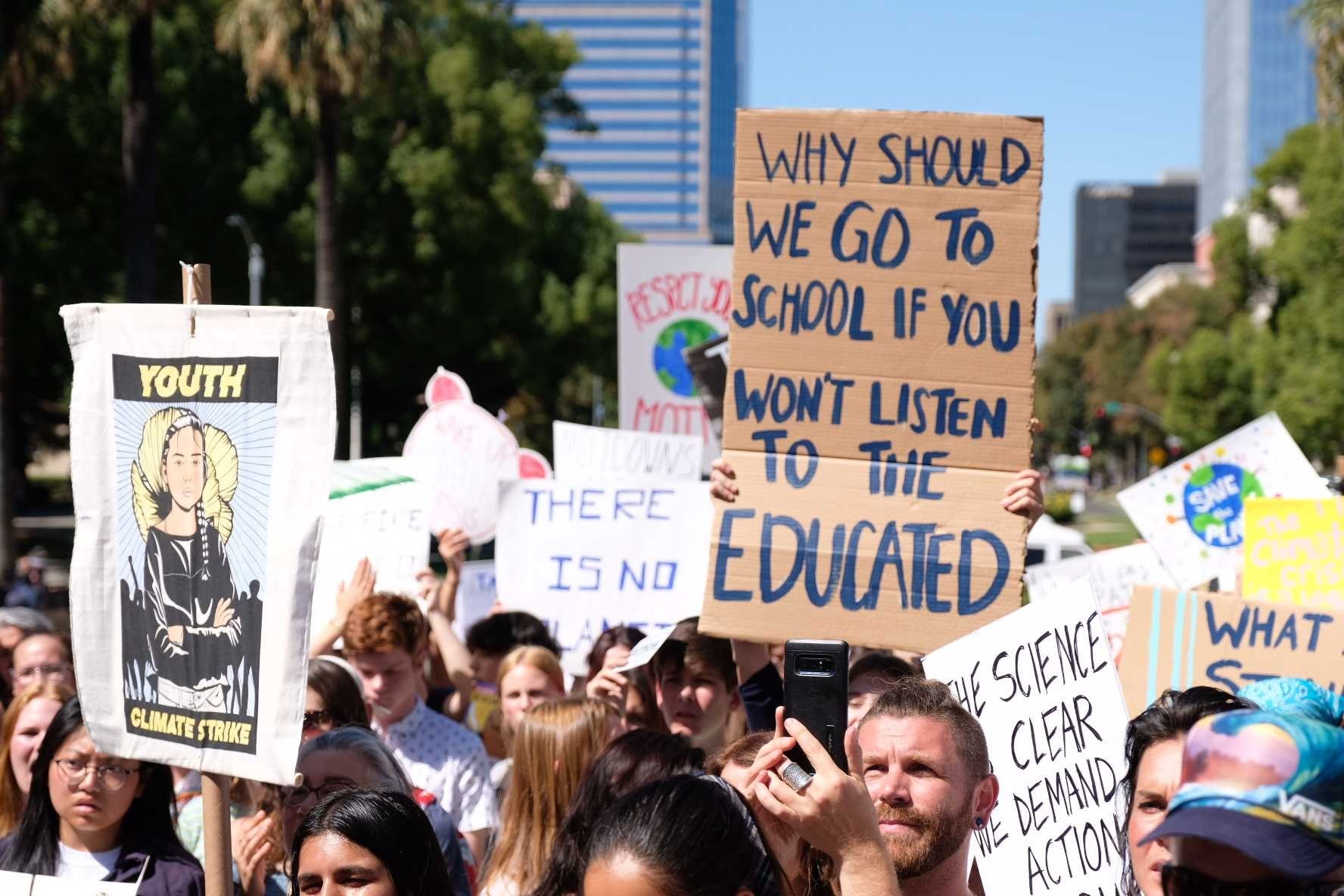 Demonstrators at the California state Capitol for the climate strike in Sacramento on Sept. 20, 2019.Andrew Nixon / Capital Public Radio

Students from Damonte High School in Reno were also planning to strike. In the evening, activists and community members will gather downtown for a rally with support from the outdoor gear retailer Patagonia.

Lufrano-Jardine says the UNR protest offers students a chance to meet with others who are concerned about climate change, which she says can feel alienating. However, the long-term goal of the rallies is to create lasting political change.

“We’re not going to let the same people that make decisions for us that don’t consider the environment stay in office. And tomorrow is about making sure our voices are heard to get that done,” she said.