KBIF general manager Tony Donato speaks neither Hmong nor Punjabi. Yet he presides over a Fresno radio station where all the news and talk shows, music, religious programs and advertising are broadcast in those two languages.

“If I had known I’d be here this long, I would’ve learned ‘table Hmong,’” says Donato. It’s a paradoxical statement for a guy who’s worked at the AM radio station for 40 years.

“I did learn how to say, ‘Can you please “hold” and we’ll get someone to help you,’” he adds with a laugh.

Since the late ’80s, KBIF has slowly but steadily cultivated a niche for itself by serving as a cultural hub for Fresno’s Hmong and Punjabi communities. The station’s original listeners were first-generation immigrants who settled in Fresno after leaving Laos, Vietnam and the Punjab region of India.

Monday through Friday, listeners tune in for KBIF’s Hmong Radio: from the “Hmong Generation X” show with music and talk to local news, traditional Hmong storytelling and a show with farming advice aimed at nearly a thousand Hmong farmers in the Fresno area.

But come Saturday morning, a KBIF staffer takes down the wide banner that decorates the back wall of the studio, which reads: “KBIF 900 AM Central Valley’s #1 Asian Voice.” It’s replaced by a banner that reads “KBIF 900 AM,” which is how the station is known in Fresno’s Punjabi community. “It’s like night and day,” says Donato.

KBIF’s coverage area extends from Bakersfield to Modesto. The programs can also be listened to online and some shows stream live on Facebook.

The all-volunteer members of Fresno’s Punjabi community host a variety of talk shows, interspersed with traditional and contemporary music and Sikh religious programs. During the week, KBIF Hmong Radio part-time and full-time staffers handle the programming

“Growing up ... as soon as the weekend hit, our radio dial was on AM 900, despite my protests ... to go back to the hip-hop station,” says 36-year old Naindeep Singh, who immigrated to Fresno from the Punjab region of India when he was a young child. And, he says, it wasn’t just his house. On Saturdays and Sundays, the station’s Punjabi shows were playing at his friends’ houses and at Punjabi-owned gas stations, Singh recalled.

“Whether it be the latest Punjabi song or...a conversation with a city council member about what’s happening in the community...or where I can get the freshest vegetables at the Punjabi store, that was all there on KBIF,” says Singh, who leads a non-profit organization called The Jakara Movement.

KBIF didn’t start out as a multicultural radio hub. It was a Big Band station when it went on the air in 1954, according to Donato. Then, as Christian evangelical AM radio began to grow in the late ’50s, the station changed its format.

It was all Christian radio in 1979 when he started working a weekend shift at the station as a high school student. “We used to be a real hot area for tent revivals,” recalled Donato. Pastors visiting from the Bible Belt hosted live radio shows on KBIF to promote their local sermons. “‘Come this Friday, Saturday and Sunday for our tent revival and get healed!’” Donato recalled them saying.

The biggest Hmong migration to Fresno happened in the ’80s according to an analysis of U.S. Census and American Community Survey data. Immigration from India began to rise in the ‘90s and has continued through the last census.

The AM station’s coverage area extends from Bakersfield to Modesto. Within that geographic area there are more than 33,00 people born in India, 15,000 born in Laos, 2,600 born in Cambodia and 5,500 born in Vietnam, according to an analysis of 2013- 2017 American Community Survey data

KBIF started with some Punjabi-language programming in 1987, according to Donato. In the ‘90s, there was growing interest from more and more people who wanted to host their own shows, and they were able to garner advertising support from local Punjabi-owned businesses, he said. The station made the switch to all Punjabi radio on weekends in 2003, Donato said.

“I felt the Punjabi-American community in the Fresno County area — they were kind-of lost. I felt I was lost,” says Gurdeep Singh Shergill, 38, who has hosted a Saturday talk show on KBIF since 2003. “I was like, ‘We need to do something about it. What’s better than media? Better than a radio?’”

Shergill emigrated from India with his parents in the ’90s when he was 14. If you stream his show on Facebook, you might catch him singing along with his favorite Punjabi hip-hop. 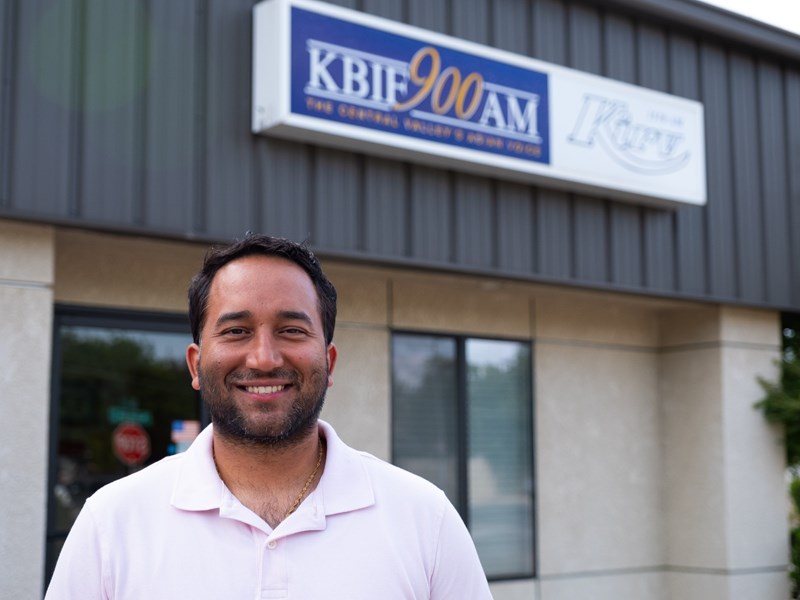 But Shergill, who also is a third-grade teacher in Fresno’s Central Unified School District, says, to him, being a radio host is also about getting Punjabi-Americans more engaged in the Fresno community. He says he and his wife, Sonia Shergill, who sometimes co-hosts, have coached first-generation Punjabi parents to get more involved in their children’s education.

“They'll just send their kids to school. They won't talk to the teacher, they won't talk to a counselor,” Shergill said. “[We] said, ‘Hey, you need to be involved in school. You need to volunteer [and] have your kids be involved in sports [and] go watch them. You know, it's OK … you don't have to work, like, 70 hours a week. It's OK to work only 40 or 50 [and] give some time to your kids.’”

Shergill said he has also hosted frank, on-air discussions of topics, such as substance abuse and domestic violence, in the Punjabi-American community.

That kind of cultural outreach is a central part of the offerings on KBIF’s Hmong radio side as well, says KBIF program director Moua Vang, who hosts a midday show with a title that he translates into English as “Noon Life.”

When a spate of teen suicides struck the Central Valley’s Hmong community in the late ’90s, Vang says he brought a counselor onto the show. “To talk about what’s happening — how can we help the community? How can we help the teenager[s]...escape from that kind of situation?” Vang recalled asking. Conversations like that are a chance to bridge some intergenerational tensions between first-generation Hmong immigrants and their children, whose values and life perspective may be different, he said.

Vang says he grew up listening to KBIF with his parents. His mother, a seamstress, tuned in for the Hmong shows all day long.

“I loved the station,” said Vang. “And I [kept] listening...I tell myself that I need to be on air. I need to be hosting.”

In addition to Hmong music, traditional storytelling and talk radio, KBIF broadcasts  funeral announcements. In Hmong culture, Vang says, it’s very important to attend what could be three or four days of funeral ceremonies and gatherings. He says the radio station plays a key role in getting the word out to the area’s Hmong community.

As host of the Hmong Agriculture Show, Michael Yang provides farming advice for roughly a thousand Hmong farmers in the Fresno County area who took up agriculture after coming to the Fresno area as refugees from Laos and Vietnam.

In the call-in segment of his show, Yang hears from farmers tuning in from their pick-ups or listening to a radio in the fields. There’s even a phone number that allows them to dial in and listen, live, without racking up streaming charges. Yang says listeners have queries on everything from California water regulations to pesticide protocol. They ask him: “I have this bug [that’s] eating my crops. I don’t know what chemical to use, can you come and look at it?”

Yang, 50, grew farming alongside his parents. He says the radio show is his way of passing on skills, guidance and encouragement to a younger generation of Hmong farmers. The program, which he’s hosted for 20 years, is intertwined with his day job as Hmong Agricultural Assistant with the University of California Cooperative Extension.

It’s the only such show in the Central Valley, according to Yang. He often begins the show by reciting the week’s USDA terminal market prices for bok choy, daikon, bitter melon, long beans and other specialty Asian vegetables typically cultivated by Hmong farmers in the Central Valley, according to Yang. Getting current price information to farmers can protect them from being exploited by buyers, he said.

“Someone will come up here and offer them cash. Let’s say the market price is $25 and someone offers them $10. You would know that’s a big difference,” says Yang.

The bedrock listeners of KBIF were first-generation, Hmong and Punjabi-speaking immigrants trying to find their footing in California’s Central Valley. As that population ages, Donato’s confident that KBIF will cultivate younger audience members with the help of younger hosts connecting with listeners through social media.

Shergill, a KBIF Saturday programming host, says platforms like FaceBook and WhatsApp have been “a blessing” in terms of broadening his listenership to younger people. Listeners tune in to his show from Canada, England, Australia and South Africa, he said. But Shergill says Punjabi-American truckers traveling along California’s freeways are his most dedicated supporters.

A few weeks ago, Shergill got a call from a trucker taking a break before his shift. “When my show was on, he parked his truck. And he said, ‘I'm gonna listen to the whole thing — before I go on.’”

“We are starting to see that the way news is going to be distributed may change,” says Naindeep Singh, executive director of the Jakara Movement. “But the need for local news (...) to continue to put a spotlight on local officials or just share what’s happening in the community ... it’s as relevant as ever,” he said.