Update Feb. 21: The Trump administration has now said it plans to cancel $929 million awarded to California's high-speed rail project and wants the state to return an additional $2.5 billion that it has already spent.

Gov. Gavin Newsom’s remarks on California’s embattled high-speed rail project in his State of the State address this week seemed to confuse just about everyone.

“Let’s be real,” the governor told a joint session of the California Legislature on Tuesday. “The current project, as planned, would cost too much and, respectfully, take too long.”

Few noticed that he stressed the words “as planned.” Instead, many focused on his next statement:

“Right now, there simply isn’t a path to get from Sacramento to San Diego, let alone from San Francisco to L.A. I wish there were. However, we do have the capacity to complete a high-speed rail link between Merced and Bakersfield.”

Those words made heads spin across the nation. Supporters and opponents alike questioned whether he’s scaling high-speed rail back or abandoning it altogether.

And many media reports jumped to similar conclusions: that the governor was killing the Bay Area to Southern California stretch.

Turns out, Newsom really isn’t changing all that much.

And far from canceling the project, the most tangible change is actually a longer Central Valley segment than the one currently funded and under construction.

Here are answers on where the $77 billion high-speed rail project stands following Newsom’s State of the State address, based on interviews with four top officials in the governor’s office and Newsom administration:

Has The San Francisco-to-Anaheim Segment Been Killed, Canceled Or Abandoned?

Nope. In fact, two crucial, early steps of the full project are moving full speed ahead.

The governor said as much in his State of the State address, although it went largely unnoticed in the moment.

“We’ll finish phase one of the environmental work,” Newsom announced, referring to the environmental review of that full segment. (To clarify: Phase one is the 520 mile, SF-to-Anaheim segment. The Central Valley stretch is a subsection of that larger segment.)

The state must do this, in fact, or else it would have to return its $3.5 billion in federal funding — $2.5 billion of which has already been spent on Central Valley construction. (More on that below.)

And, Newsom added, California will “continue to support our regional projects north and south” of the Central Valley stretch. He’s referring to the “bookend” projects intended to bolster commuter rail lines in the Bay Area and Southern California, so they can eventually carry high-speed rail trains as part of a “blended” system.

The state is spending more than $1.2 billion on these projects, which includes the electrification of CalTrain lines on the San Francisco peninsula, renovations at Union Station in Los Angeles, and other projects in both regions.

Nearly all that money comes from Proposition 1A bond funds approved by voters in 2008. The remainder, $113 million, is funded by the high-speed rail project’s share of revenues from California’s cap-and-trade greenhouse gas emission auctions.

There is no change to any of those commitments or funding sources.

High-Speed Rail Authority CEO Brian Kelly affirmed this in a statement after Newsom’s speech, saying that the governor plans “to complete the environmental work statewide, to meet our ‘bookend’ investments in the Bay Area and Los Angeles and to pursue additional federal and private funding for future project expansion.”

If Democrats win the White House and control of Congress in next year’s elections, high-speed rail funding could be right back on the table — at which point California will be ready to ask for new federal funding to keep building.

In other words, forget “canceled” or “abandoned.” Don’t even say “paused” or “scaled back.”

The most you can really say about the Bay Area-to-Anaheim stretch known as “Phase 1” is that it’s merely on the back burner for the time being.

So ... What’s Actually Changing, Then?

Newsom now wants all available state funding to go toward finishing the Central Valley segment, which is currently under construction.

And he wants to lengthen it.

“Let’s get something done, once and for all,” he proclaimed in the State of the State.

Until now, the state was only building 119 miles of track — from Madera, a town north of Fresno along Highway 99, to a spot just north of Bakersfield.

The governor is now directing the High-Speed Rail Authority to build 171 miles of track. In the north, Newsom wants to extend construction from Madera to Merced. In the south, he wants the track to reach downtown Bakersfield, instead of ending at the outskirts of the city.

A previous business plan suggested that, once the 119-mile stretch of construction was funded, future cap-and-trade funds could go toward either expanding the track in the Central Valley or a complicated stretch from Gilroy to San Jose that might include a tunnel underneath the Pacheco Pass.

Under the governor’s new direction, should any new state funding become available, Gilroy-to-San Jose takes a back seat to the Central Valley. 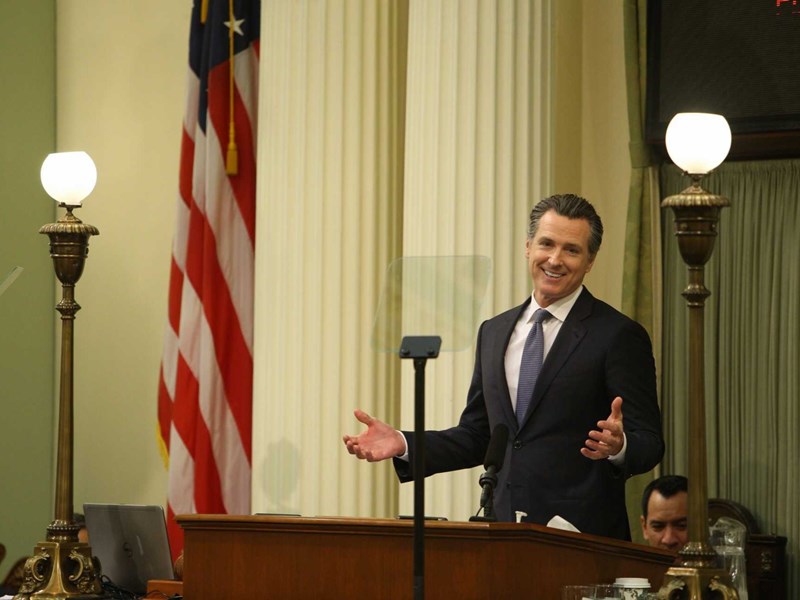 Newsom is also ordering “new transparency measures,” he said in his State of the State. And he’s replacing the Brown-appointed chairperson of the High-Speed Rail Authority with his own pick.

Perhaps more than anything else, Newsom is changing how the governor of California is talking about the high-speed rail project championed by former governors Arnold Schwarzenegger and Jerry Brown.

But that isn’t assuaging the project’s critics.

Republican Assemblyman Vince Fong of Bakersfield says Newsom may be trying to put “lipstick on a pig,” but says the problems that have plagued high-speed rail aren’t going away.

“It’s fundamentally flawed,” Fong said after taking a day to digest the governor’s speech. “The ridership numbers have never been real. It’s been over budget. There’s a lack of transparency — no one can figure out what’s happening with this project. We need to be honest with the public.”

President Trump Tweeted That California Owes The Federal Government Its Money Back. True?

Perhaps, but not yet.

California has received $3.5 billion from the federal government for Central Valley construction work, in two installments: $2.55 billion from the “stimulus” law signed by President Obama that sought to bolster the U.S. economy amid the Great Recession, and $929 million about a year later.

The state has already spent the first chunk but has not yet spent the second.

The second and third requirements originally had December 2018 deadlines. But they were extended to 2022 in an amended funding agreement signed by the Obama administration the day before Trump’s inauguration.

So, assuming the Trump administration is not willing to renegotiate the terms of the funding, the state has less than three years to finish all its environmental reviews and complete the 119 miles of track from Madera to northern Bakersfield.

And Newsom made clear he does not want return the money.

“With all due respect, I have no interest in sending back $3.5 billion in federal funding that was allocated to this project to President Donald Trump,” the governor said in his speech. “That, fundamentally, would have to happen if we just walked away.”

Trump may have seen Newsom utter those words in a Fox News story. Or perhaps not. Regardless, here’s what he tweeted Wednesday evening:

California has been forced to cancel the massive bullet train project after having spent and wasted many billions of dollars. They owe the Federal Government three and a half billion dollars. We want that money back now. Whole project is a “green” disaster!

Newsom’s team, which believes the governor gets a boost among his constituents any time he can use the president as a foil, was quick to respond after enduring two days of pushback to his high-speed rail agenda:

This is CA’s money, allocated by Congress for this project. We’re not giving it back.

The train is leaving the station — better get on board!”

Still, there will be no California high-speed rail trains leaving any stations until at least 2026. That’s when the High-Speed Rail Authority says it will begin “early operation” on the newly expanded, 171 mile Central Valley segment from Merced to downtown Bakersfield.