The former lieutenant governor and San Francisco mayor took the oath of office Monday underneath a tent at the steps of the state Capitol, vowing to “be bold” and “aim high” — because, the Democrat said, “America needs California.”

“People’s lives, freedom, security, the water we drink, the air we breathe — they all hang in the balance,” he said during his inaugural address. “The country is watching us. The world is waiting on us. And the future depends on us. And we will seize the moment.”

It was a clear signal that California will continue to lead the resistance against Donald Trump. He never once uttered the president’s name, but he relentlessly criticized Trump’s policies, especially on immigration — despite a protester wearing an Immigration and Customs Enforcement hat, who sought to shout-down Newsom’s oath of office.

Newsom also pivoted to the balancing act that he knows he must execute:

“We will be prudent stewards of taxpayer dollars, pay down debt, and meet our future obligations,” he said, vowing to protect the $23 billion budget surplus he’s projected to inherit from termed-out Gov. Jerry Brown.

Yet he also signaled he will push his sweeping campaign promises — from universal preschool and health care to a major expansion of paid family leave.

“But I want to be clear: We will be bold. We will aim high and we will work like hell to get there,” Newsom said.

Several times during the speech, the youngest of Newsom’s four kids — 2-year-old Dutch — ran onto the stage.

“This is exactly how it was scripted!” Newsom responded to Dutch’s appearance, which solicited laughs from the audience. 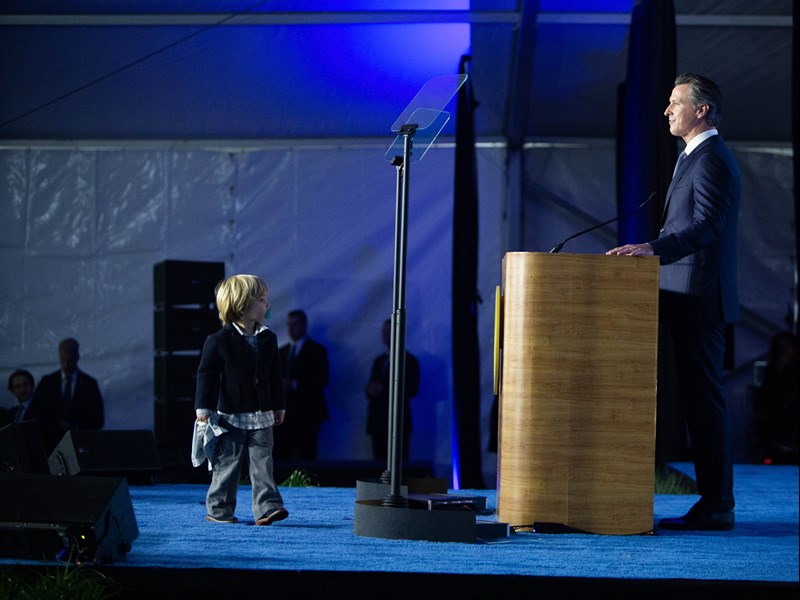 For example, Rendon told CapRadio after the inaugural address that paid family leave is “an area where we’re behind the rest of the world, for sure.”

Republicans, who hold barely a quarter of legislative seats, offered the new governor congratulations. Assembly GOP Leader Marie Waldron suggested Newsom ought to shore up the failures in California’s existing health care system rather than look at single-payer.

“The way our system works now, we don’t have access for the folks who already have health care. And health care does not equal actually getting to see a doctor,” she said. “We need to work on Medi-Cal reimbursements to allow more physicians to be available to see patients.”

And former Republican Gov. Arnold Schwarzenegger offered warm words for his new successor — and a warning.

“I think California has to continue making an effort to gather together and accumulate a great Rainy Day Fund,” the state’s 38th governor said. “But I think that Gov. Newsom is a visionary. He’s a terrific guy. He has a lot of energy. And what he said today at the Inaugural Address was right on the money.”

The most symbolic moment of the speech — at least the scripted part — began with Newsom thanking Brown. California’s longest-serving governor would often quote the “Sermon on the Mount,” warning lawmakers to build the state’s budget on rock rather than sand.

“For eight years, California has built a foundation of rock. Our job now is not to rest on that foundation. It’s to build our house upon it,” Newsom said.

It was a tribute, to be sure — but also perhaps a changing of the guard.

Newsom’s vetoes: Why did the governor block California bills?