In his inaugural address outside the Capitol Monday, Gov. Gavin Newsom painted a vibrant picture of a “California for all” in which residents can succeed regardless of income level or immigration status.

The 51-year-old father of four has officially stepped in as the state's 40th governor. He replaces Jerry Brown, who departs the office after a record four terms.

The ceremony was a Newsom family affair. His eldest daughter began with a recitation of the pledge of allegiance, and First Partner Jennifer Siebel Newsom followed with a poem in English and Spanish. The governor’s speech was interrupted multiple times by audience laughter as his 2-year-old son charged the stage, often while Newsom was discussing the importance of investing in kids.

Newsom was Brown’s lieutenant governor for the past eight years. Before that, he served two terms as mayor of San Francisco. As governor, he says he’ll focus on education, homelessness, health care and paid family leave, among other causes.

He nodded to the work of predecessor Brown, who took the governorship with California facing a $27 billion deficit and left it with a projected $16 billion in reserves. Newsom says it’s time to put that funding to use.

“For eight years, California has built a foundation of rock,” he said. “Our job now is not to rest on that foundation. It’s to build our house upon it.”

The new governor took multiple jabs at the federal government, vowing to offer “an alternative to the corruption and the incompetence in the White House.”

On criminal justice, he vowed to fight over-incarceration and “end the outrage that is private prisons in the state of California once and for all.”

Republican Assemblymember Marie Waldron said health care is one place where legislators can work with Newsom to find joint solutions. She told CapRadio the current medical system needs to be improved before the state can expand coverage.

“The way our system works now, we don’t have access for the folks who already have health care,” she said. “We need work on Medi-Cal reimbursement, to allow more physicians to be available to see patients ...There’s a lot of things we need to fix as we move forward.” 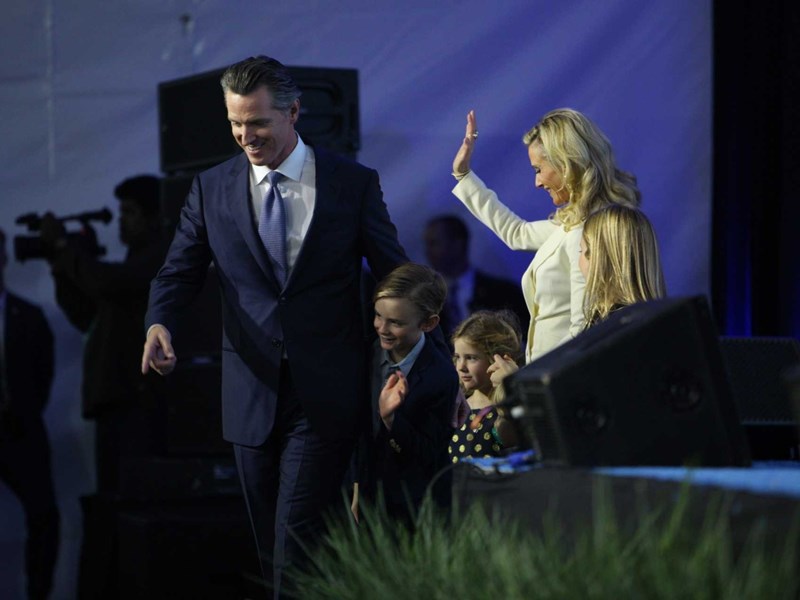 The governor did not specify how he would pay for such programs, or respond to past criticisms of his liberal policies. Speaking to reporters Sunday, Newsom said there would be more details in the coming weeks.

"I’ll be very detailed in the budget a few days later, and then we will architect in much more nuance and detail at the State of the State," Newsom said.

Republican Rep. Doug LaMalfa of Oroville said Newsom will have to work with politicians of different viewpoints to meet the diverse needs of urban and rural counties.

“There’s going to be a ton of stuff we’ll never agree on that he outlined in his speech today,” he said. “But I have to just, in order to serve my constituents best as I can, find where we can do the common ground things and be successful and, you know, we’ll work around it.”

Newsom won the gubernatorial race against Republican John Cox 57 percent to 43 percent in November. At his Monday speech, he vowed to support all Californians, not just those who voted for him.

Addressing concerns about employment, Newsom said he wants to increase access to higher education and skills training to build “the next generation of middle-class jobs.” He emphasized a need to reduce the gap between wealthy and poor residents, and spoke about opening doors rather than putting up walls.

“In a time of swift and unsettling change, all Californians should be able to count on a measure of security and a real shot at opportunity,” he said.